These Chicken Philly Cheesesteaks have all of the flavor of a classic cheesesteak, but use shredded chicken thighs instead! They’re still every bit as juicy, cheese and delicious as the original! 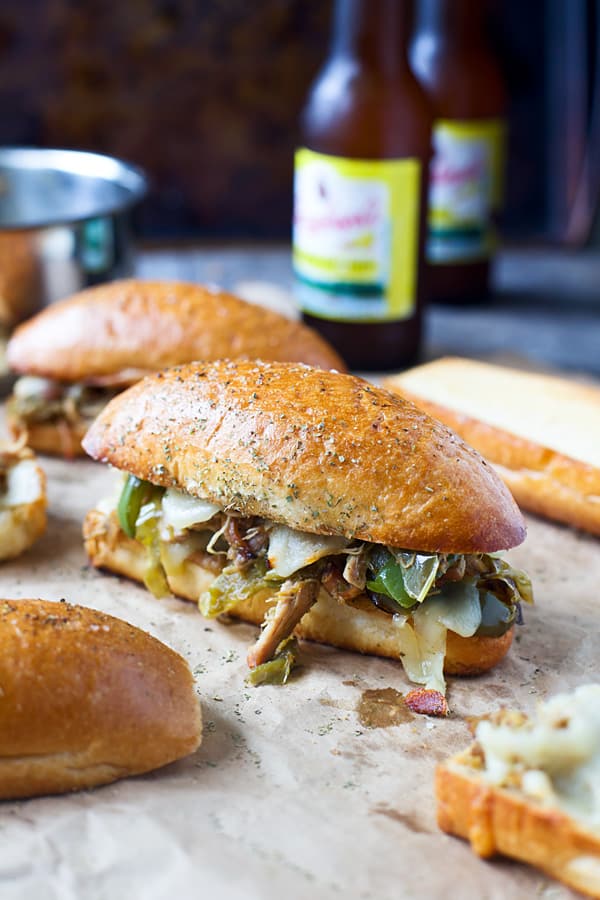 As an adult, I’m a rule follower to a tee. I’m the one who tells the cashier at the grocery store when my son eats a banana in the middle of the produce department even though it only costs 19 cents. I wait until the walk sign comes on at stoplights even if the closest car is half mile away. And don’t even try to get me to swoop in to closer seats at a sporting event even if they’ve been empty up until the seventh inning.

As a teenager, I was the opposite. I was always scared of getting in trouble deep down, but the mischievous girl in me always won out in the end. Most of them were harmless infractions like sneaking out of my parents’ basement to basically walk around the neighborhood a few times in the middle of the night, lighting Kleenex tissues on fire with my best friend (because fire), or teeping the houses of the boys we liked in school. 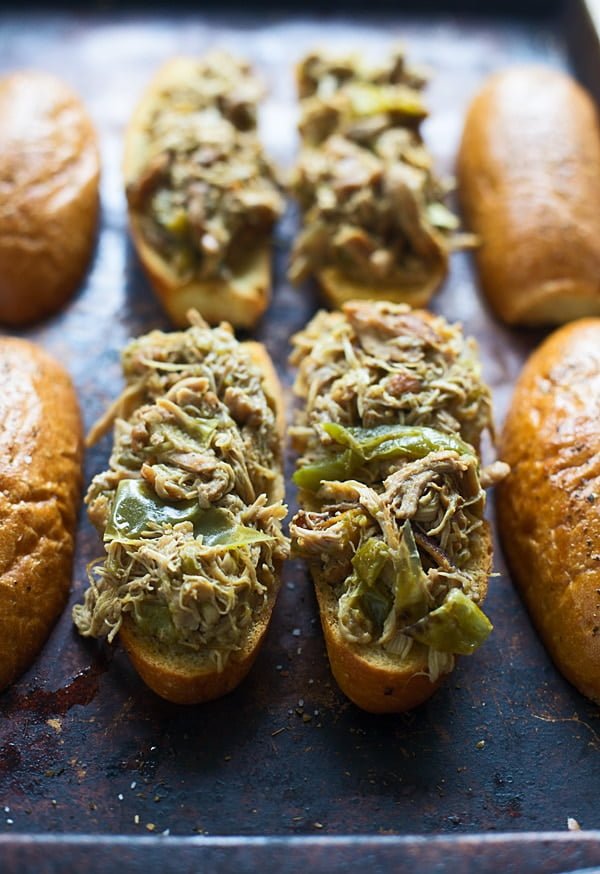 Some of the things we did weren’t so harmless, like taking our parents’ cars for joy rides just before we turned 16, drinking beer underage and incessantly skipping marketing class to inhale a copious amount of Philly cheesesteak sandwiches, because obviously 45 minutes for lunch wasn’t long enough. (If Teddy asks, I did none of these things.) Admittedly, skipping class was the least shameful of the three, and actually most of the time, we even had our teacher’s permission if we brought him back a sandwich as well – they were that good (and he was fresh out of college with no authority whatsoever).

To this day, it’s the reason I’m in love with Philly Cheesesteaks, and I’ve shown my love here and here and here, but if we’re being honest, it’s not really the “steak” component of the sandwich that has me lusting over them after all these years. It’s the gooey cheese, the crunchy bread that soaks up every last bit of juice, and the way the combination of the juice and cheese turns into some sort of liquid gold equivalent that oozes out every crevice.

It wasn’t until I tried a chicken version at the same restaurant a few years back, that I realized if you want to cut calories and fat, or just don’t care for red meat, there are alternative options out there that are just as delicious. 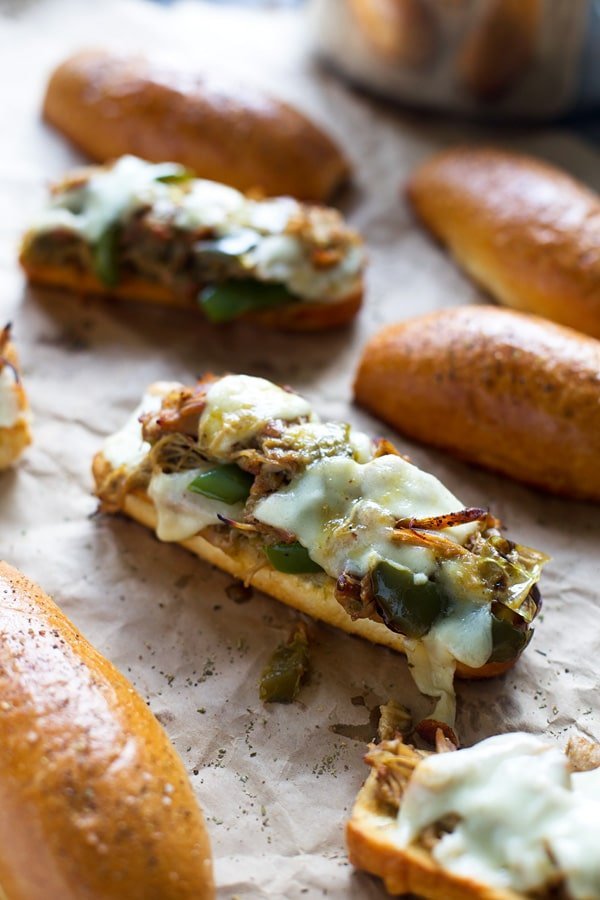 I know for a cheesesteak to be a cheesesteak the meat typically needs to be chopped or sliced, but I wanted an easier, more hands-off version, coupled with an obscene amount of juice, so for this version, the meat is shredded. I still wanted to mimic the meat being cooked on a stovetop, so instead of just throwing everything in a crockpot, you brown the chicken and the veggies in a dutch oven first, then add in the beef broth and a little bit of worcestershire sauce, and simmer it all until the meat is super tender.

Once the meat is shredded, it’s nestled on to a toasted bun, covered in provolone cheese and popped in the oven just until the cheese melts. For photography purposes I sliced the hoagie in half lengthwise, but I really prefer to cut down the middle, like this, so the juice can soak in to every inch of the bread.

These were absolutely delicious the night of, but they may have been even better the next day for lunch…

For more easy, slow-cooked sandwiches, check out these recipes! 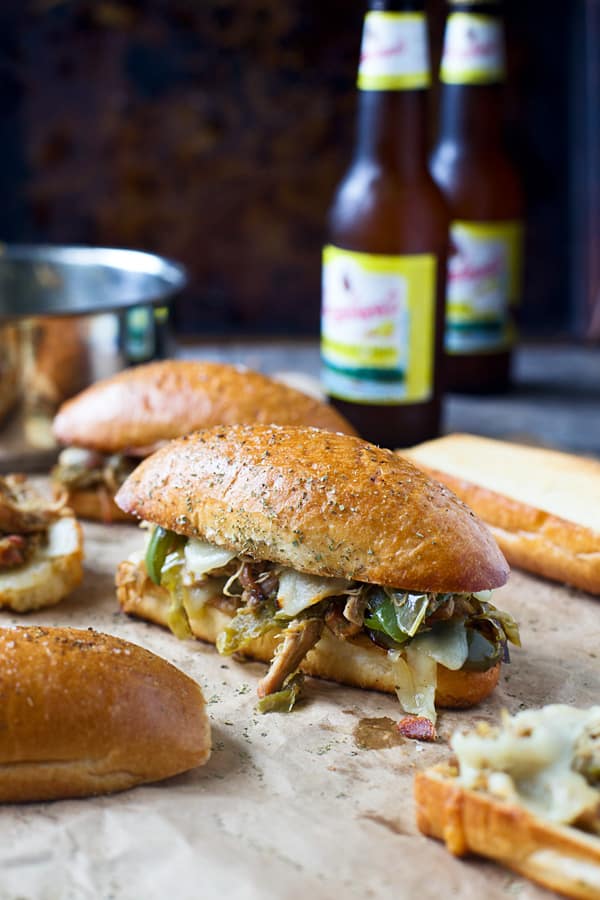 5.0 from 1 reviews
Chicken Philly Cheesesteaks
Print
Prep time
10 mins
Cook time
1 hour
Total time
1 hour 10 mins
These Chicken Philly Cheesesteaks have all of the flavor of a classic cheesesteak, but use shredded chicken thighs instead! They're still every bit as juicy, cheese and delicious as the original!
Author: Cooking for Keeps
Serves: 6 sandwiches
Ingredients
Instructions
3.3.3077