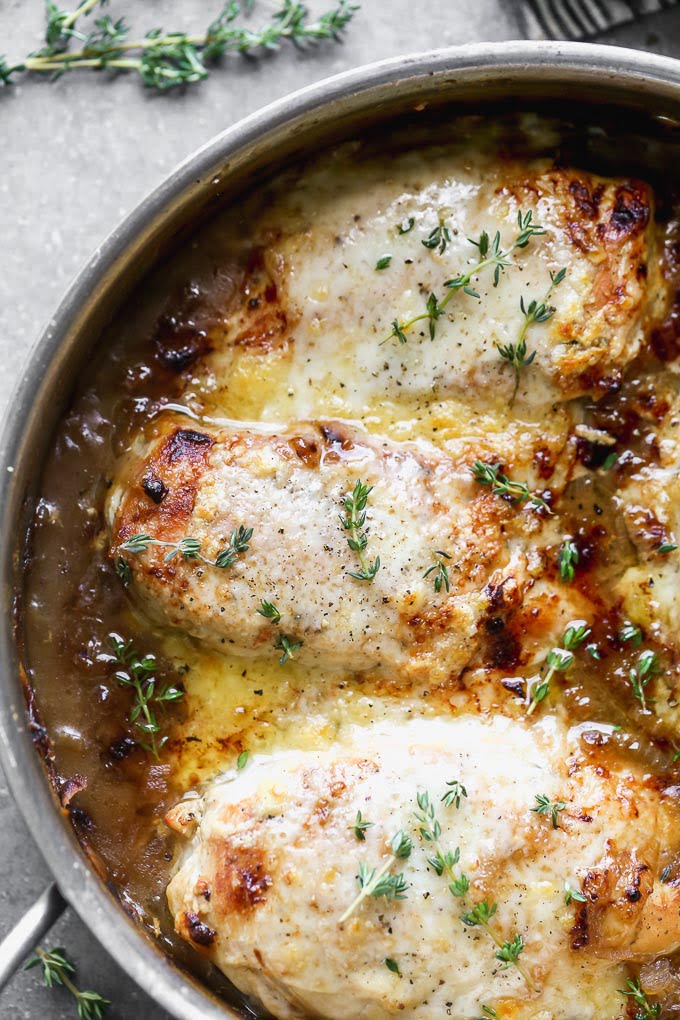 French Onion Chicken Skillet is just that. French onion soup with chicken, in a skillet.

Can you think of anything better??

I’ve been so excited to post this recipe. For one, it’s such a great winter recipe. French Onion Chicken Skillet is one of those dishes that’s going to warm you from the inside out and keep you satisfied without weighing you down, which is always something I love this time of year.

However, the main reason I’ve been so excited to share French Onion Chicken Skillet with you guys is because it’s SO incredibly delicious. So delicious, if I were given the task of having to choose one thing to eat for the rest of eternity, it just may be this. And I am not ashamed to admit that I may have been seen briefly licking my plate clean after every last morsel was gone.

Another great thing about French Onion Chicken? From start to finish, including caramelizing those stubborn onions, this dish comes together in about 35 minutes. Another win. 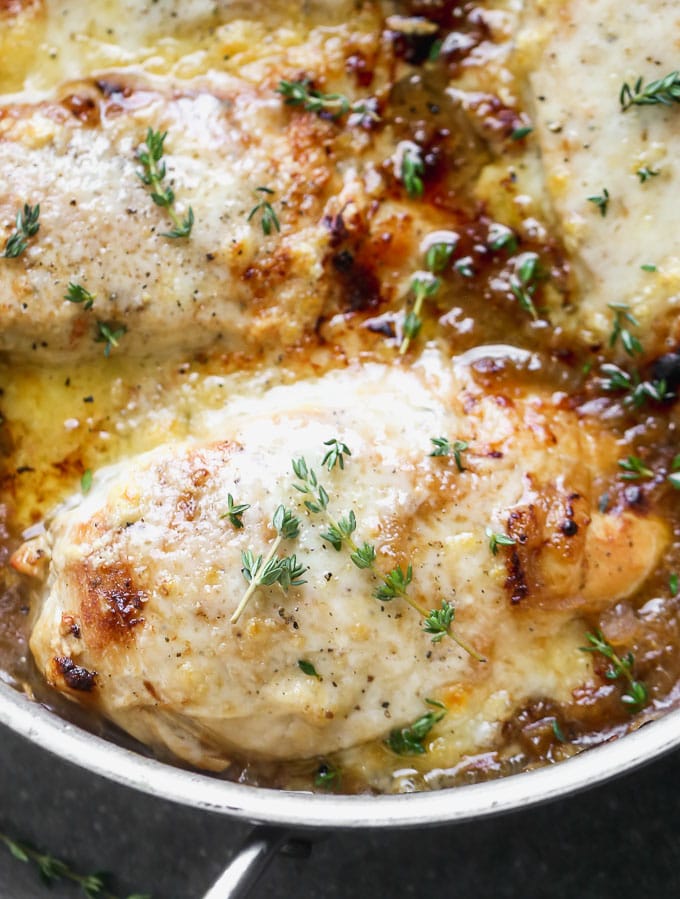 Butter and olive oil. French onion soup isn’t complete without a little bit of butter. Here, we use just a touch to cook the chicken along with a little bit of olive oil.  Butter also makes an appearance when we caramelize the onions.

Chicken. I like to use chicken breasts on the smaller end, just because large portions aren’t my thing. If you want, you could also use chicken thighs.

Onions. French onion chicken skillet calls for onions, lots of them. If you’ve ever caramelized an onion before, then you know how much they cook down. Here, we need about five cups, which should equal about three medium-sized onions or two large onions.

Garlic. Just a little bit will do. And honestly, if garlic isn’t your thing, it can easily be left out.

Salt and sugar. Salt and sugar bring out the natural sugars in the onions when caramelizing them, plus it helps to speed up the process just a touch. 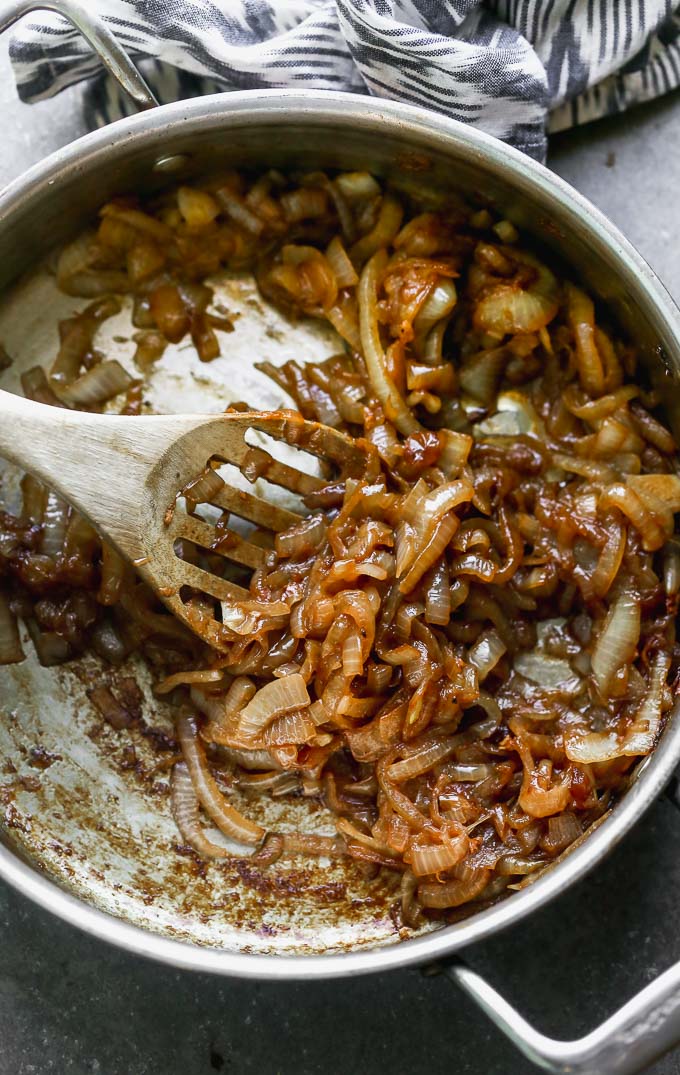 Cognac. This is my secret ingredient in French Onion Chicken Skillet. I am obsessed with the taste of cognac here. It adds a nutty, sweet aroma that’s so incredibly delicious. Please please please don’t skip it! You can buy a small bottle at your local liquor store pretty inexpensively.

White wine. A lot of French onion soup recipes call for red wine, but I find white wine compliments the onions and cognac a little bit better and makes this dish a little bit lighter.

Flour. Just a few tablespoons to thicken the sauce.

Beef broth. Any beef broth will do!

Fresh thyme. Fresh thyme adds a lovely fresh herbal note to this French onion chicken skillet. It’s a pretty pronounced flavor, so a little bit goes a long way, and it also makes a big difference in the end flavor of the dish, if you leave it out.

What is gruyere cheese?

Ok, so gruyere cheese is arguably the most important part of French onion soup. But what the heck is it? If you haven’t had gruyere cheese before, man you’re missing out! It’s kind of similar in flavor to American Swiss cheese, but has a sharper, more nutty flavor. It’s also a harder cheese than Swiss, and oftentimes aged much longer.

Even though it’s considered a hard cheese, it actually melts quite beautifully, which makes it the perfect cheese to use in fondue, and, you guessed it. French onion soup. 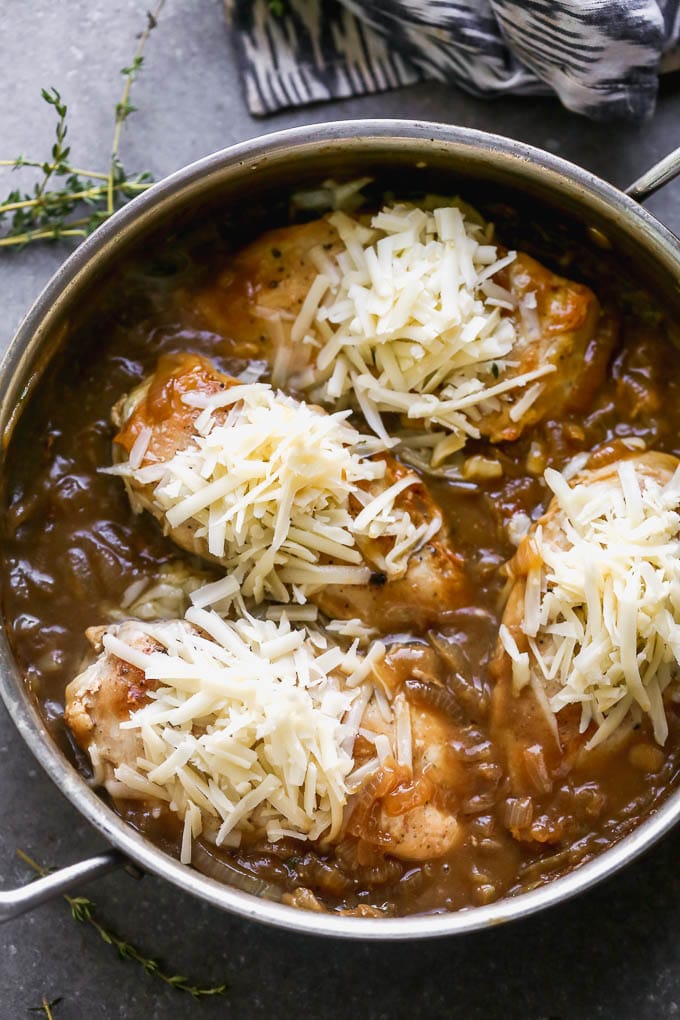 The first thing you want to do is get a nice sear on your chicken breasts. I season both sides with plenty of salt and pepper and then sear them in a little bit of butter and olive oil in a large skillet over a medium heat. Once they’re brown on both sides, take them out of the pan and transfer them to a plate. Cover with foil.

Add a little bit more butter to the same skillet you cooked the chicken in along with all of the onions. Toss and turn the heat down to medium-low. Add a little bit of sugar and plenty of salt to help get the process starting,

Now, this part takes a little bit of patience, but if you get through it, you’re well on your way to devouring French onion chicken skillet.

When you slowly cook the onions, the sugars in the onion slowly release, turning them that beautiful golden brown color we all love. Make sure to stir the onions every few minutes or so, so they don’t start to brown or burn. After about 15 minutes, the onions should be caramelized enough for our French onion chicken skillet. They should be golden brown, soft, and super sweet. 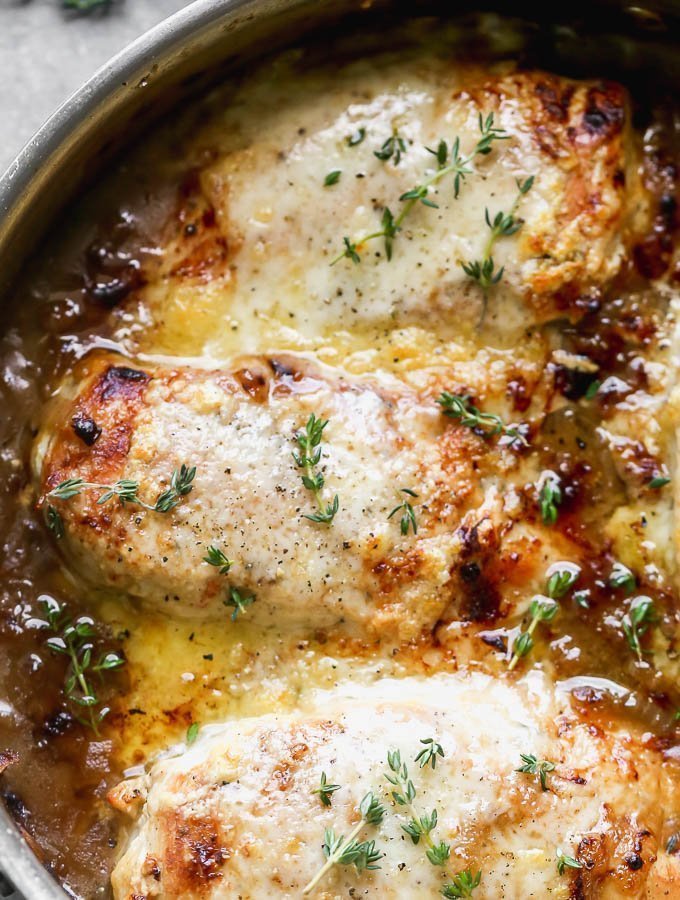 Evenly divide the cheese between the four chicken breasts. Pop the chicken into the broiler. Broil until the cheese is bubbly, brown, and crisp. Serve with fresh thyme.

Yes! You can make the entire dish in advance up until you broil the cheese. Cool the French onion sauce and chicken completely and store in the skillet you cooked it in. Be VERY careful to not overcook the chicken, since you will be heating it again later. Cover with a lid and store until you’re ready to eat. 30 minutes before re-heating, pull the skillet out to set at room temperature.

Preheat oven to 350 degrees. Place the skillet with the lid on in the oven until warmed through, about 20 minutes. Remove from the oven and turn it on broil. Cover the chicken with cheese and broil until bubbly and hot.

What to serve with French Onion Chicken Skillet 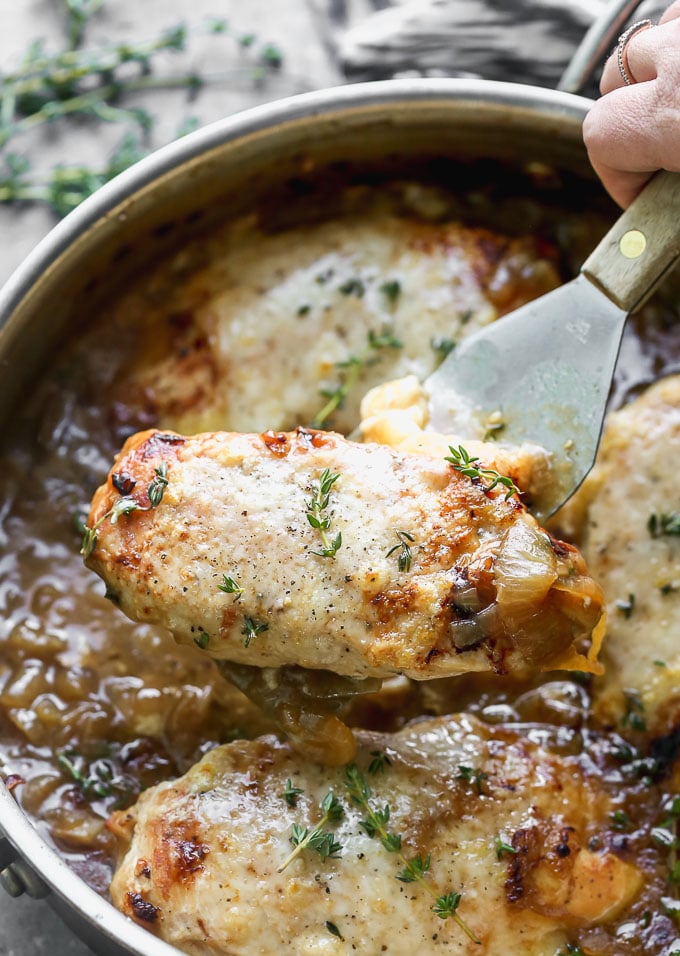