Creamy Chicken Tortilla Soup is spicy, cheesy, creamy, and so delicious! It’s packed with dried chiles, canned green chiles and uses corn tortillas instead of cream or cheese for a super creamy texture without adding a ton of fat and calories. Top with homemade tortilla chips, shredded cheese and plenty of sour cream. 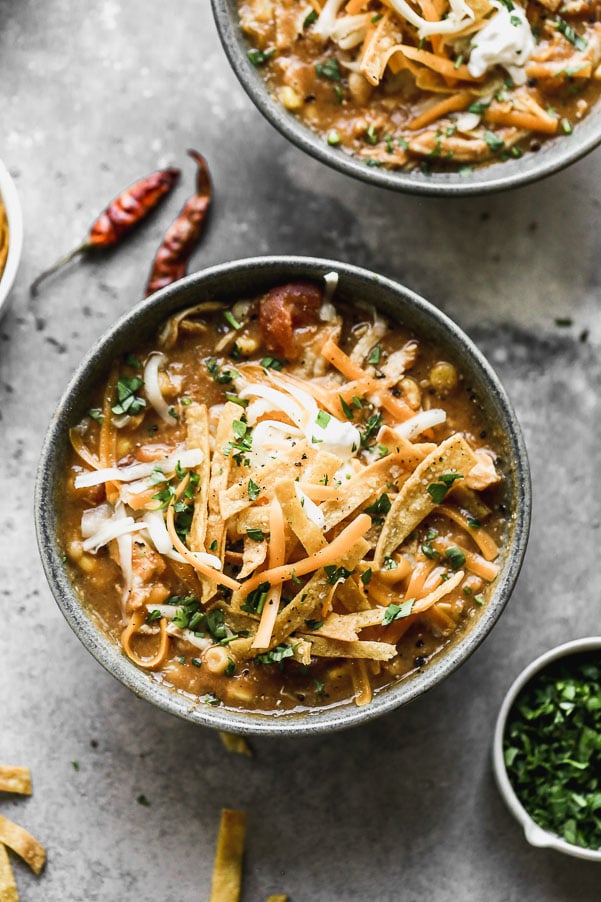 I’m one of those people who loves soup unconditionally. I adore all varieties, and I’ll even slurp it down on the hottest of summer days. So, when winter rolls around, you’ll find soup in my meal plans at least a few times a week, sometimes more.

I always start winter out with the basics: Chicken noodle, classic chili, or baked potato and then inch my way up to something a little bit more exciting like Butternut Squash Cheddar Soup with Grilled Cheese Croutons or Coconut Curry Wonton Soup for some variety.

Today’s Creamy Chicken Tortilla Soup falls somewhere in between basic and elevated simply because the preparation itself is admittedly, very easy, but the flavor that comes from it, isn’t your average bowl of chicken broth steeped with vegetables.

Instead of relying on simply chili powder and other dried spices to create the base flavor of our Creamy Chicken Tortilla Soup, we use or favorite dried Chile de arbol peppers (more on those later). The chili powder, cumin, and other spices are just meant to enhance the flavor of the chiles.

Also, instead of adding cream or cream cheese to the soup to make it creamy, instead we simmer it with corn tortillas until they soften and then puree everything together for an irresistibly creamy broth.

Top off with a handful of tortilla chips, shredded cheese and plenty of sour cream. 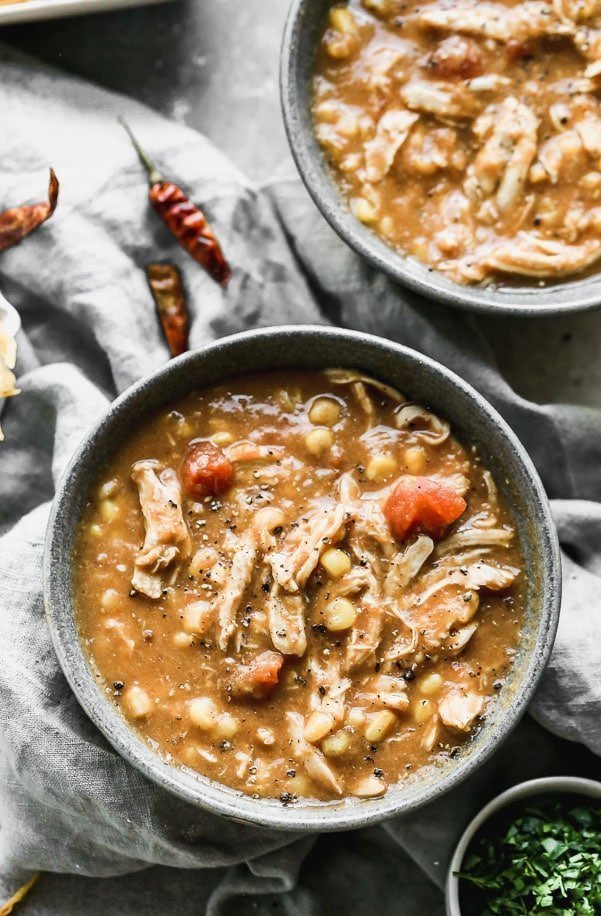 Onion, Garlic, and Olive. The base of almost all of my soups, and an essential flavor starter.

Dried Chile de Arbol Peppers. These dried peppers have a pretty intense spice to them, so a little goes a long way. I use two here, which produces a very spicy broth (which we love!). If you’re sensitive to spice, then one should do the trick. They’re typically available at most supermarkets. Remember you can always add more, but you can’t take the-ice away.

I think people are often intimidated when it comes to dried chiles, but honestly, they’re so easy to work with, especially when you blend them in a soup. All I do is de-stem them, break each one open to scoop out the seeds and then add them to the soup.

Corn Tortillas. Most chicken tortilla soups are on the brothy side, which I love, but when it’s really cold out, all I want it something creamy, so this version uses a trick from this Cheesy Turkey Tortilla Soup that has you puree the corn tortillas directly in to the soup. What this does is gives off the elusion of cream without having to actually add it in. 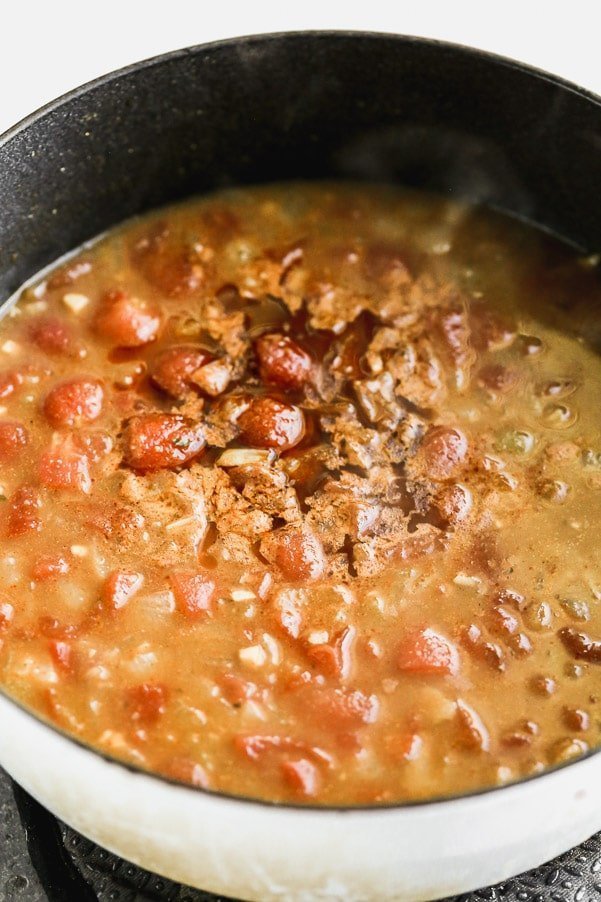 Chicken stock. Low sodium chicken broth or chicken stock is what you want to use so you can control the amount of salt that goes into our Creamy Chicken Tortilla Soup.

Chicken. Shredded, pre-cooked chicken is what I used. You can also buy a rotisserie chicken, use leftover chicken (maybe from this roast chicken), or let a few chicken tenders simmer in the soup, then shred.

Corn and Black Beans. We love a hearty soup, so I make sure to pack it with chicken AND veggies. 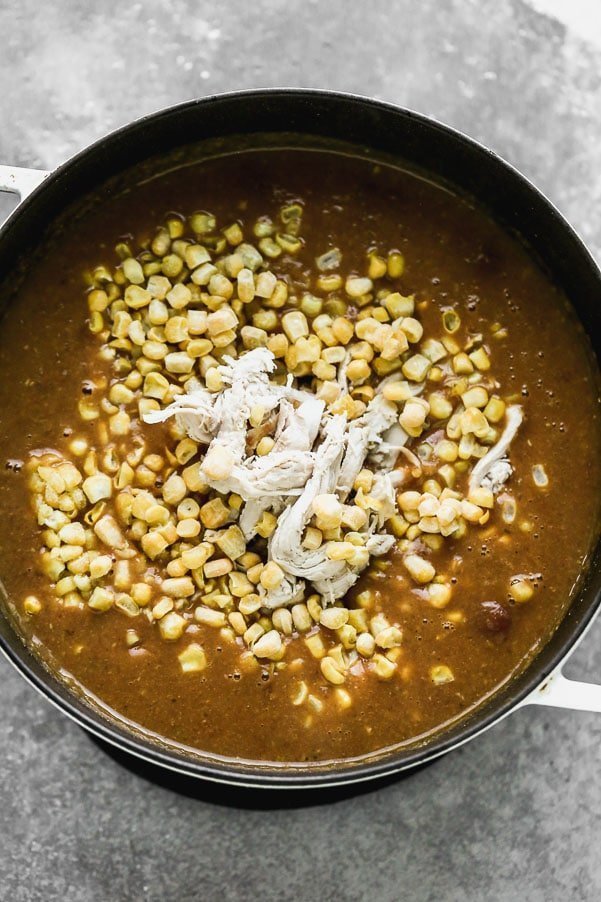 Sauté onion and garlic. I use olive oil, but you could also use canola oil or butter. Sweat veggies until they’re slightly softened.

Dump and stir. Add chicken stock, canned geen chiles, dried chiles, cumin, plenty of salt, oregano, a can of tomatoes, and some smoked paprika. Bring the mixture to  a boil and reduce to a simmer for about 10 minutes. After 10 minutes, add the corn tortillas in. Simmer another five minutes.

Blend the soup. I use an immersion blender, but you can also transfer it to a blender. I like for my soup to retain a little bit of texture so I stop blending just shy of completely smooth, but you can take it as far as you like.

Add in the rest of the ingredients. Throw in shredded chicken, frozen corn, and a can of black beans. Simmer another five to ten minutes. 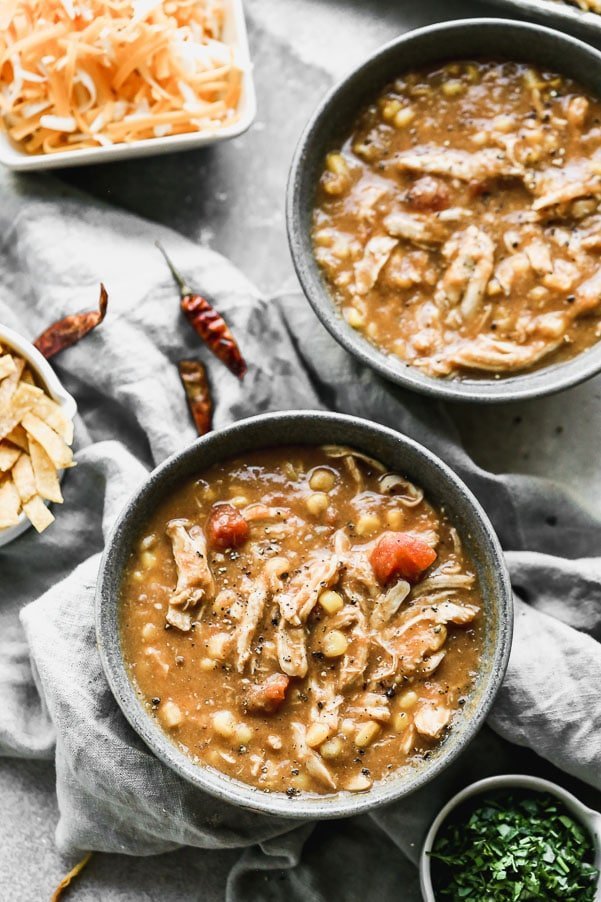 What to serve with Creamy Chicken Tortilla Soup

Can you make tortilla soup in advance?

Yes! The entire dish can be made a few days in advance. Keep garnishes on the side.

Some of our other favorite tex-mex dishes 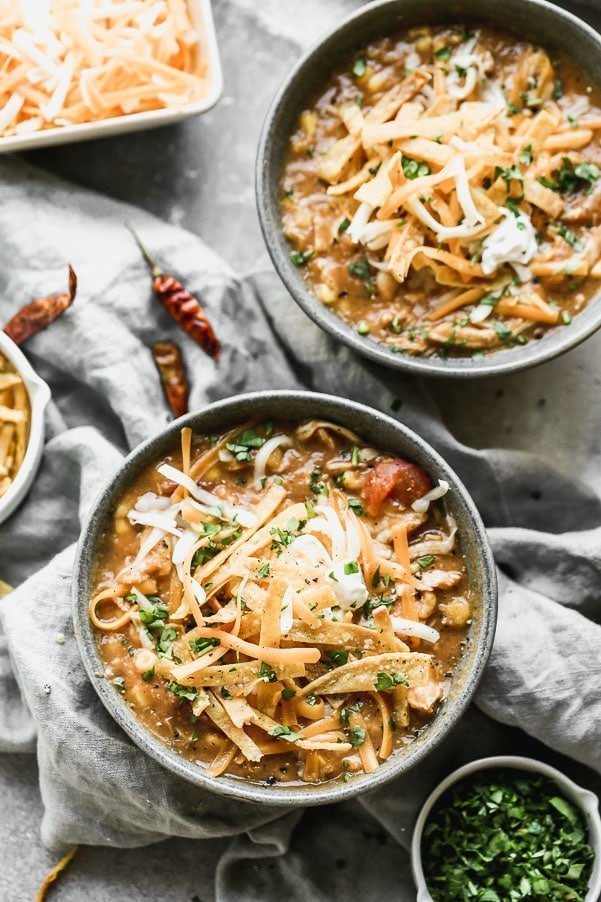 Print Rate Email
This creamy chicken tortilla soup is packed full of dried chiles, canned green chiles and uses corn tortillas instead of cream or cheese for a super creamy texture without adding a ton of fat and calories.
Prevent your screen from going dark
6 people

Recipe inspired and adapted from How Sweet Eats.