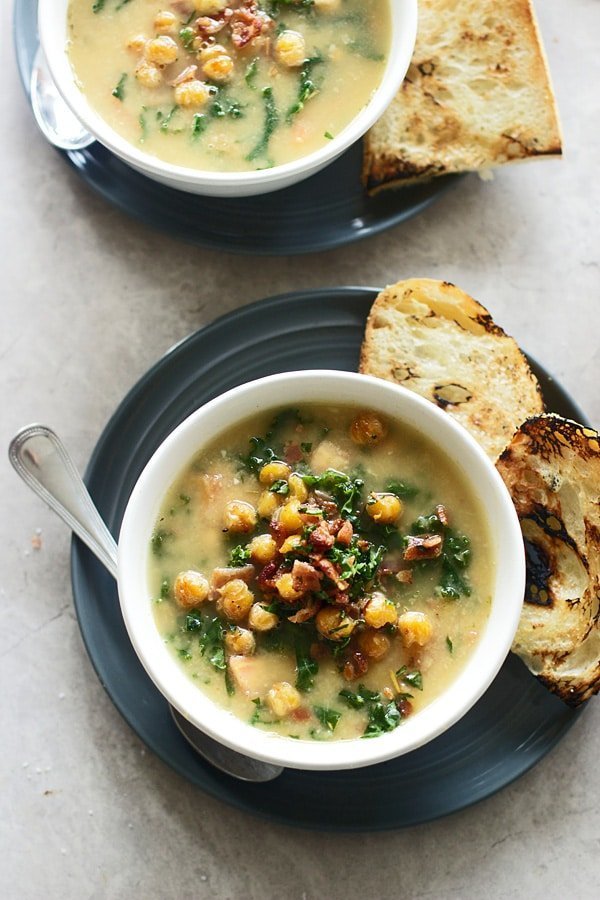 Aside from being nose-deep into the thought-provoking memoir (yeah right), The Andy Cohen Diaries, the deeply disturbing Sharp Objects and the food-filled novel, Off the Menu, my mind has had eight consecutive days of brain-less activities. I’m now convinced I’ve actually lost a few brain cells because of it, although it’s most likely a combination of the mindlessness and the daily tequila consumption. Side note, the tequila in Mexico is NOT the same as the tequila in the states, as I’m pretty confident they infuse some sort of hallucinogen or anesthesia into theirs that’s illegal here. Just saying.

Anyways, as you can imagine it’s been rather difficult to ease back into the realities of day-to-day life. I’m no longer served a breakfast of Mexican chilaquiles and lattes. Nor do I wake up to the sight of the ocean and a clear blue sky. And my favorite beach waiter is definitely not handing me my go-to hibiscus margarita at 2pm. Sigh. 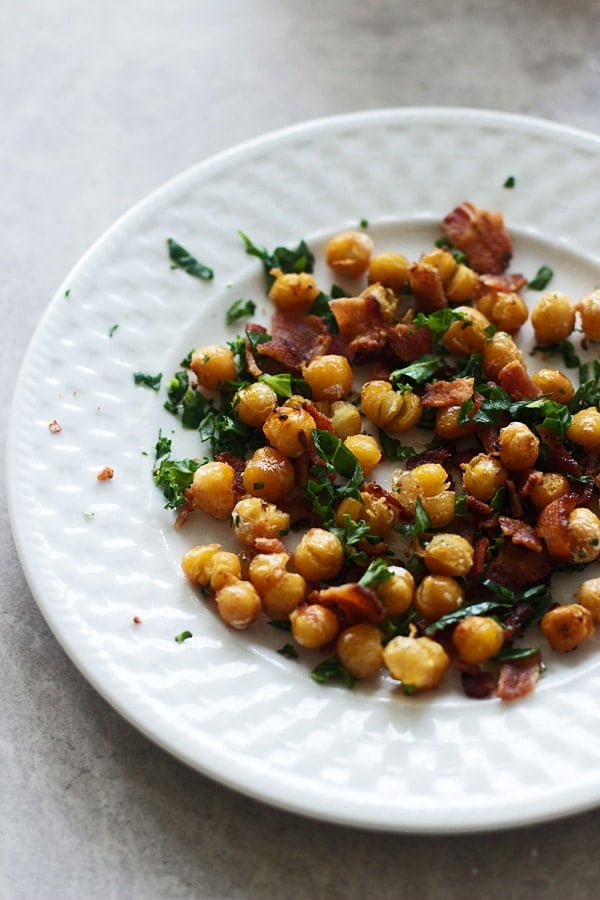 I can’t complain though, I got to come home to a sweet puppy that loves me unconditionally and missed me terribly. I get to wake up in my own comfy bed, without an aching back. And I get to do what I love most – cook to my little heart’s content.

I have a whole arsenal of recipe ideas from my trip that I’ll be sharing later on, but being out of the country and subsisting on guacamole, chips and tacos for a whole week made me crave some of my favorites from back home. Biscuits and gravy was my first craving that I tackled, followed by a crazy delicious and comforting pasta (coming later!) and now, this Chickpea Soup with Kale and BACON.

Kale because it’s healthy, and bacon because, well, it makes a soup made out of chickpeas and kale a little more appealing to my where’s-the-meat husband. 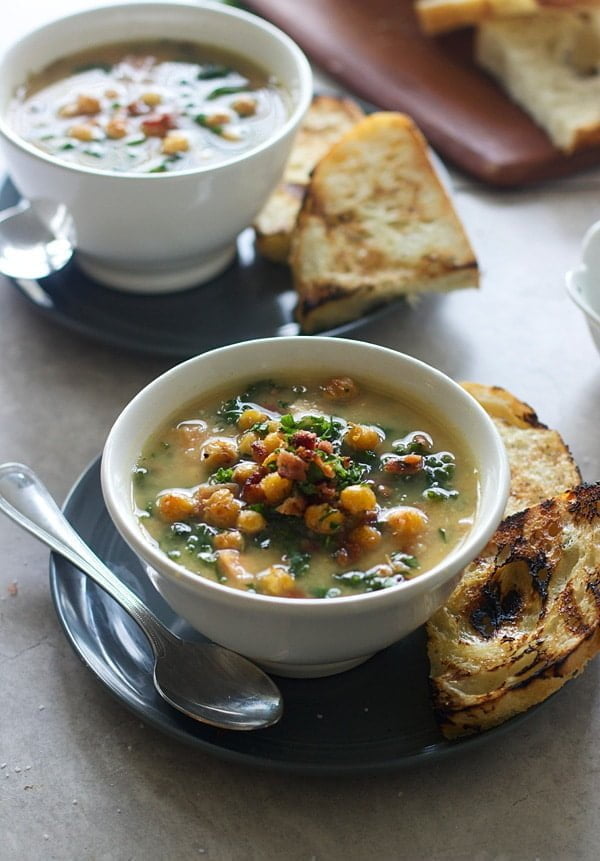 I went back and forth on creating a Tuscan-inspired chickpea soup (with bacon) and an Asian curry-inspired variation, but if there’s one thing I missed most in Mexico, it was bacon, and as previously mentioned, Kevin does not respond particularly well to a vegetarian meal.

As easy as chicken noodle soup, but with the depth of flavor of a slowly simmered stew, this hearty mostly-veggie dish comes together quickly with canned chickpeas and boxed chicken broth. I thought (briefly) about using, dried chickpeas, but decided against it because, well, to put it bluntly, I was lazy and impatient – the deciding factor in many of my decisions. 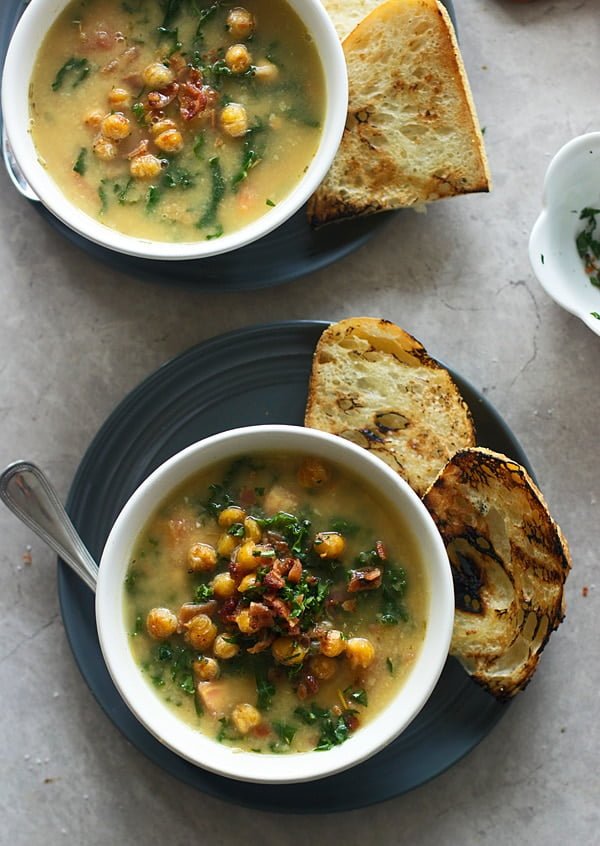 The base begins with a few slices of bacon (any kind will do), and the fat that’s rendered out is then used to cook the onions and garlic until they’re soft and fragrant. About half of the chickpeas are dumped in, sautéed for a bit and then transferred to the blender along with a little bit of chicken stock to create a thicker, slightly smooth texture.

The pureed mixture gets transferred back to the pan, and is covered in chicken stock, the remaining chickpeas, bacon, a little bit of dried rosemary, salt and the ingredient responsible for creating that hearty, depth of flavor – a parmesan cheese rind.

At the last minute a copious amount of kale is stirred in, and it’s ready to be served.

I garnish with some crispy chickpeas fried in a little bit of olive, a little bit more bacon and some chopped kale. 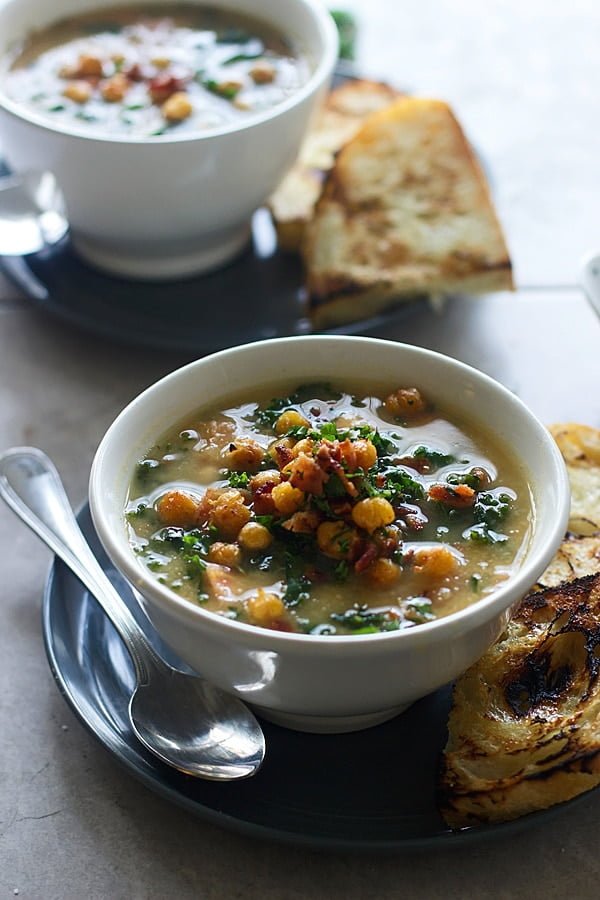