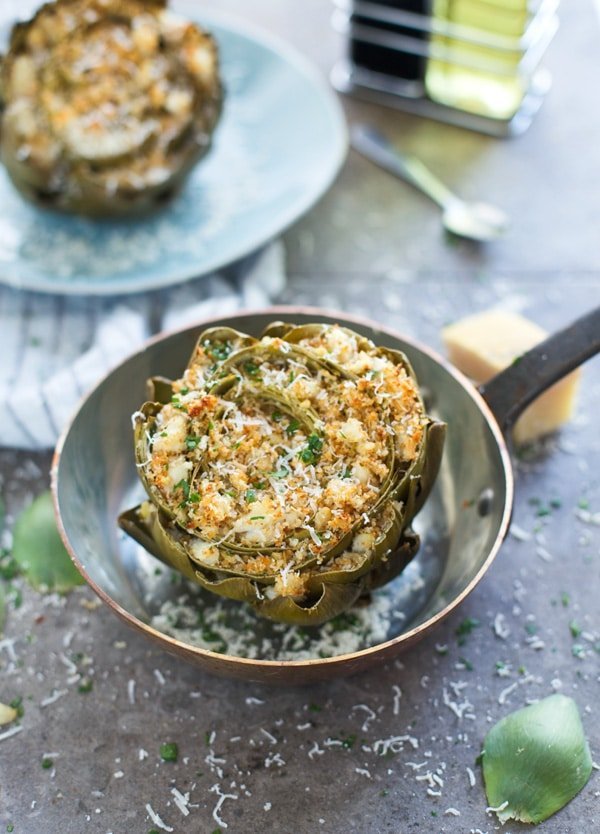 I am two very different people when it comes to restaurants. I’m the girl that wants to try a restaurant I’ve never been to with dishes I’ve never tasted, every time I go out to eat. But I’m also the girl that loves tradition, wants to return to my favorite spots over and over again, and eat the same dishes that made me fall in love with the restaurant to begin with. It’s a constant battle between not wanting to be disappointed and fear of missing out on something that could potentially become one of my favorites.

Kevin likes to joke he’s never been to the same restaurant twice with me, and I will admit, I do hightail it to the newest restaurant in town as soon as it opens (although with a one year old that’s becoming increasingly more difficult), but I also make sure to frequent our favorite spots on a somewhat regular basis.

There’s the Mexican hole-in-the-wall we can’t get enough of. The neighborhood breakfast spot that has the best mini waffles and bottomless coffees. The bakery we walk to more than I care to admit. The cozy French restaurant we go to for all our special occasions. And the old-time Italian restaurant I could eat at every day for the rest of eternity. 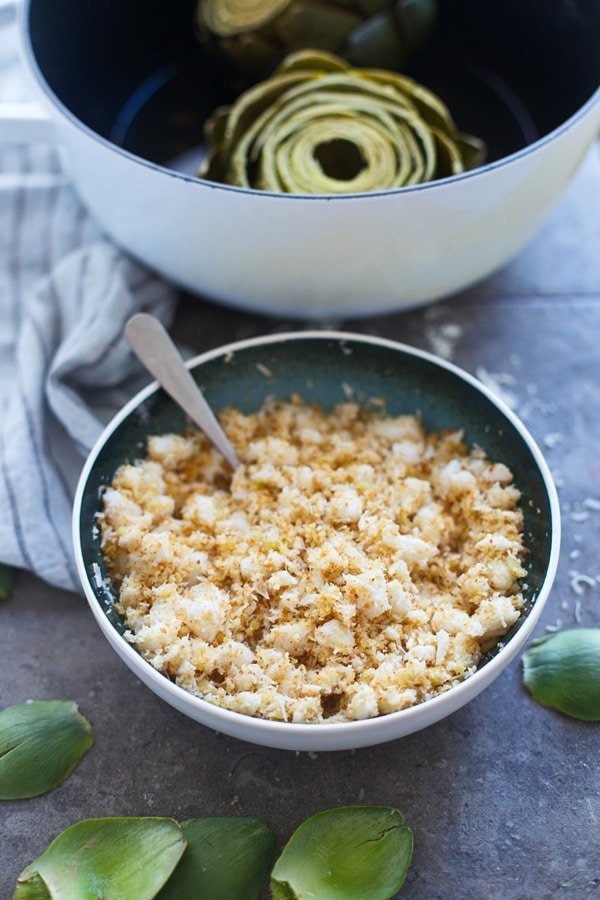 Each of these spots has a dish (or two) I order time and time again, but the Italian restaurant in particular, has a few I can’t skip over when I’m there – fettuccine alfredo for my entrée and a stuffed artichoke to start.

I’ve been going to this restaurant for what feels like an eternity, and even as young child, I vividly remember going to town on the butter, cheese and breadcrumb-stuffed vegetable. I would scrape off every bit of flesh from every single leaf of the artichoke until I got down to the fork-tender heart, which was obviously demolished as well. All that was left in the end was a shell of an artichoke heart in a puddle of butter.

It’s taken me the better part of two decades to make stuffed artichokes at home, but I can confidently attest that it was worth the wait. Instead of a strictly butter, bread crumb and cheese stuffing, I compiled the filling sort of like a crab cake with lots of lump crab meat (obviously), lemon juice, zest, a mixture of panko and plain breadcrumbs, Dijon mustard, grated parmesan cheese, and of course, plenty of butter (although not near as much as the original). 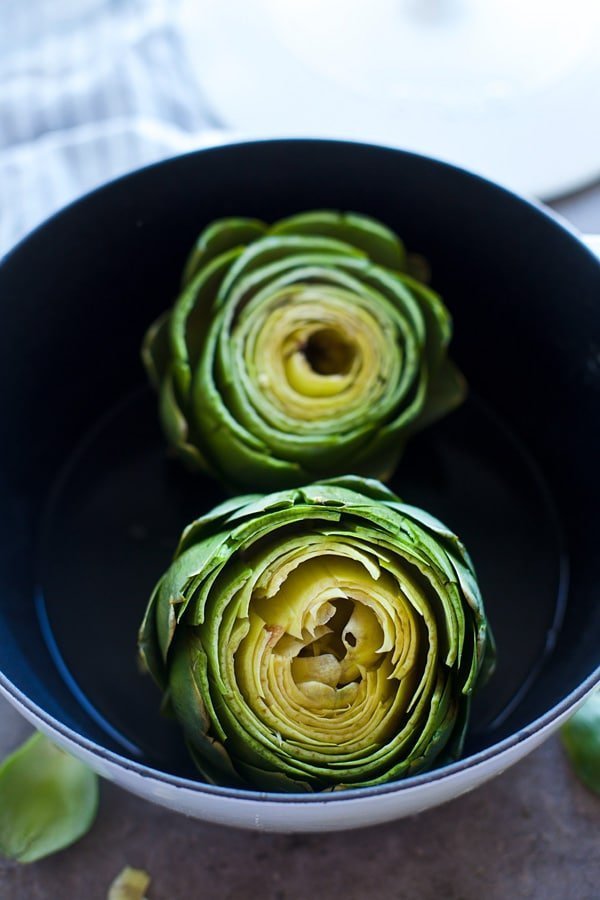 Before the filling can make it in to the actual artichoke hearts, they need to be properly prepared. I start by cutting off the top ¼ of the artichoke, and then gently scoop as much of the choke (the fuzzy part inside the artichoke) as possible. You will have to sort of gently pry the artichoke open to scoop the choke out, but it’s pretty easily done. I cut enough of the stem off so the artichoke can sit flat in the baking dish, pull the tough outer leaves off, and then use kitchen shears to cut off some of the prickly tops of the artichokes. While they’re not they easiest or quickest vegetable to cook with out there, they are one of the most delicious, so the little bit of extra effort it totally worth it.

Once all the artichokes are prepped, I pop them top-down into a pot filled with about an inch of water and some lemon juice, bring it to a boil, reduce the temperature and then let the artichokes cook in the lemon water bath. You could also steam them, but I didn’t want them to get too brown so I let them cook in the water mixture, either way works. Once they’re almost ready to go, I pry the leaves back, stuff each layer with the crab mixture, and then pop them in to a hot oven.

What happens while it cooks, is the stuffing inside the leaves, sort of adheres to the leaves, so when you pull them off, the crab mixture doesn’t come tumbling out. At the same time, the stuffing that’s exposed to the heat of the oven becomes super crispy, and almost nutty from the butter, making it almost impossible to decide which part of the artichoke is better – luckily, you don’t have to….

One artichoke could easily feed two to four people for an appetizer, but if you’re like me, you’ll want an entire guy to yourself… 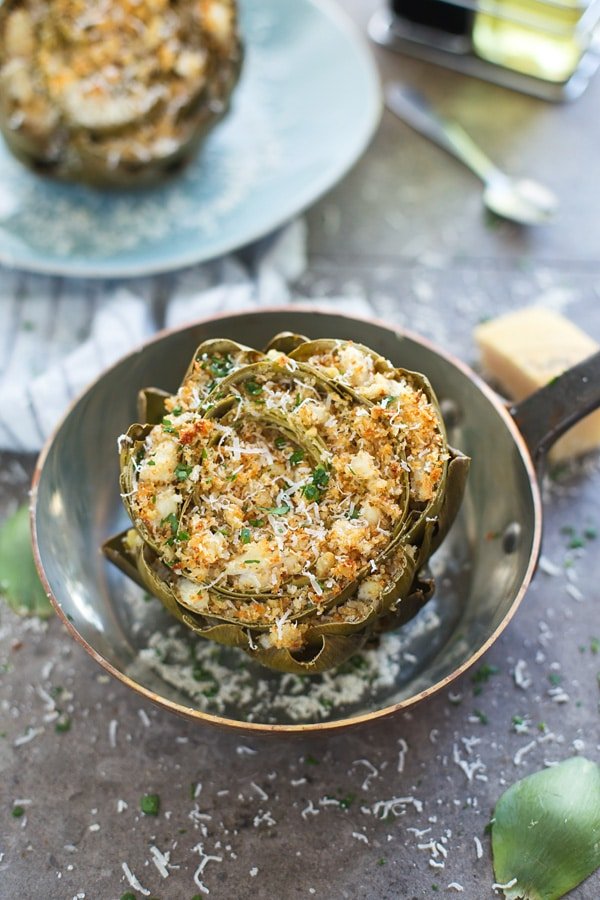