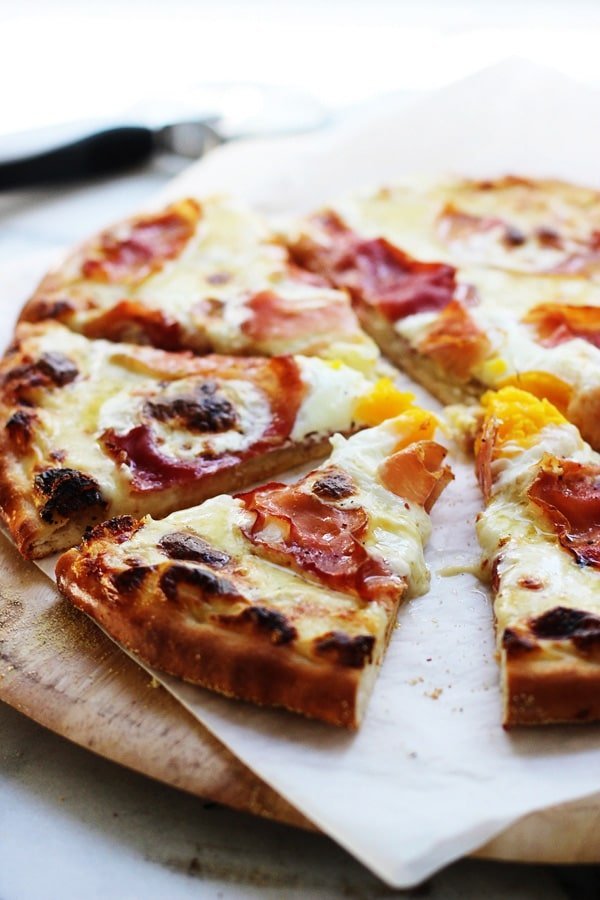 A few months ago I went through this phase where I had pizza like three times a week for three weeks straight. It was glorious and perfect, yet disgusting and shameful at the same time. After approximately one hundred slices, 5,000 pounds of cheese and a spontaneous addition of some previously non-existent love handles, I put a stop to the madness.

No pizza, no exceptions for the foreseeable future.

I did well, phenomenally well actually; although I really couldn’t confirm if it was because of my iron clad will power, or just the lack of opportunities to actually say no to pizza (there were none). Either way, it lasted…

Because now, now I can’t get enough AGAIN. It’s like I have this insatiable appetite for all things cheesy and carb-heavy. The feeling is indescribable. I’d almost equate it to the feeling I got right after my wedding day; the feeling that I’d been depriving myself for so long, I deserved to eat everything in sight. Anything I wouldn’t let myself have prior to that day was inhaled like a ravenous lion, starved for days on end in the middle of the worst famine in decades. I think it took me all of two point five seconds to put on the weight I’d spent three miserable months trying to lose.

Since the pizza consumption is coming down drastically, that leaves us with a new dilemma in and of itself. Where should it come from? What should be on it? What kind of crust? Extra cheese? 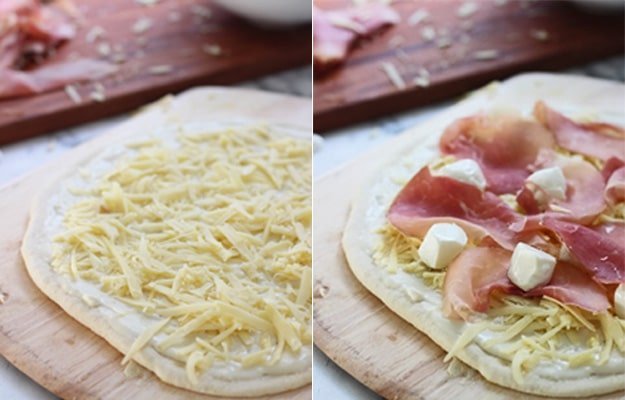 Pizza is a personal thing. Kevin prefers it from the run-of-the-mill pizza delivery shop or frozen (no thank you). I prefer it from somewhere more…refined, or at least local. He likes thicker crust. I like thin. He likes meat toppings. I like veggies. He likes to pick it up. I like it to be delivered to my door step. Although there are always exceptions to our preferences – I occasional crave a greasy pepperoni pie from Papa Johns or Pizza Hut, and he occasional wants a more New-York-style or authentic Italian style pie – for the most part, we stick to our guns.

This croque madame pizza was a perfect compromise for our polar opposite pizza tastes. Kevin was happy to have meat on his pizza, and I was happy to have something other than just plain old pepperoni. Plus it tastes EXACTLY as the name implies.

Here’s the jist – thinly sliced ham is nestled onto a slice of Dijon soaked white bread and topped with a generous handful of grated gruyere cheese, it’s then topped with another slice of bread, slathered in creamy béchamel sauce, topped with more shredded gruyere and popped under the broiler until it’s golden brown and bubbly. Last minute it’s topped with a perfectly fried or poached egg. While a sandwich typically entails the use of both hands, a croque madame is better devoured more elegantly with a fork and knife, keeping your hands, arms and face relatively cheese and sauce-free. Of course, if you prefer to look like a certified disaster mid-meal, then by all means, use those hands, just don’t blame me when you look up across the table to a horrified/disgusted look from your dinner companion. 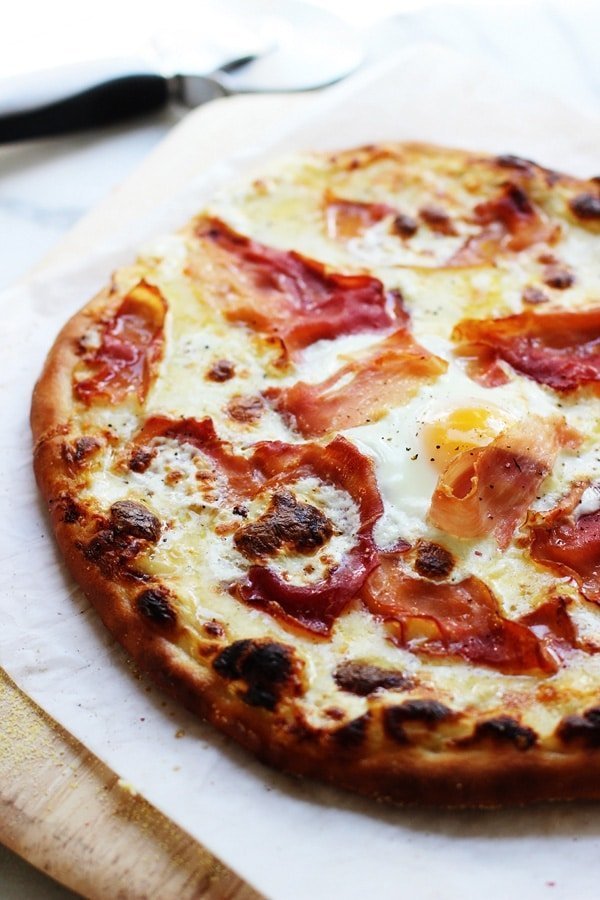 It only made sense to turn the classic, yet famously messy sandwich into something you can eat with only your hands and not look like a total disaster.

I made relatively few changes in the makeup of the pizza; Dijon laced béchamel is slathered onto pizza dough, topped with gruyere cheese, covered in salty prosciutto, dotted with fresh mozzarella cheese (for the stretchy cheese factor needed in 98% of my pizzas) and topped with a freshly cracked egg. It’s baked on a ridiculously hot pizza stone until the crust is seriously crispy, the cheese is golden brown and melted, and the egg white is cooked through. A final dusting of freshly cracked black pepper is the final touch on this French classic turned American.

Now I’m sure the French are thinking, “Leave it up the Americans to take a perfectly good French sandwich and turn it into an abomination like this….” 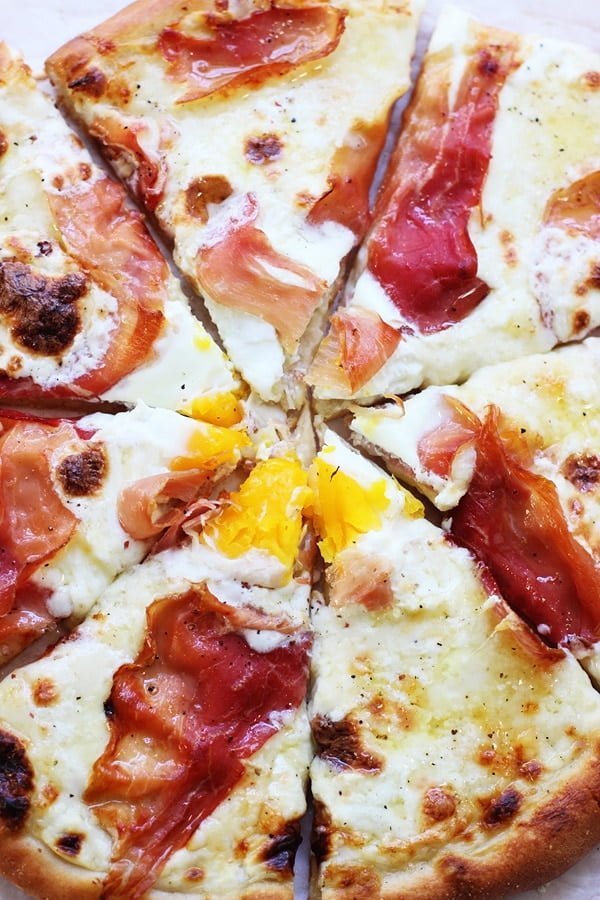 A classic French sandwich gets an American twist with this croque madame pizza.