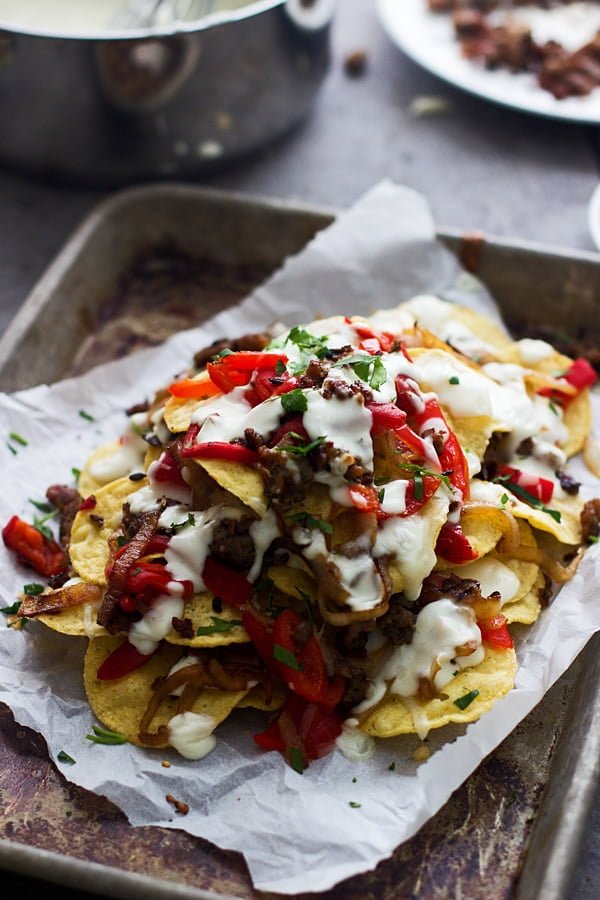 Sorry for the late post! I’ve been faced with every blogger’s worst nightmare.

Issues which had me scared for dear life that I was about to lose all 70,000 of my pictures stored on my little Mac Book, just like that. My computer has been teetering on the edge of crashing for the better part of a year, but I, being the lazy girl I am, just figured I’d start mass deleting pictures. I mean I don’t REALLY need 700 photos of Quinoa Fried Rice, do I?

So I did what any sane person would do and started to crazily delete photos like it was my job. I was extremely happy with what I’d accomplished until I realized that it didn’t clear out my hard drive out at all – weird. And then I got an email from an online magazine who needed a high-res photo of one my recipes that just so happened to be included in the deleted lot. Crap. 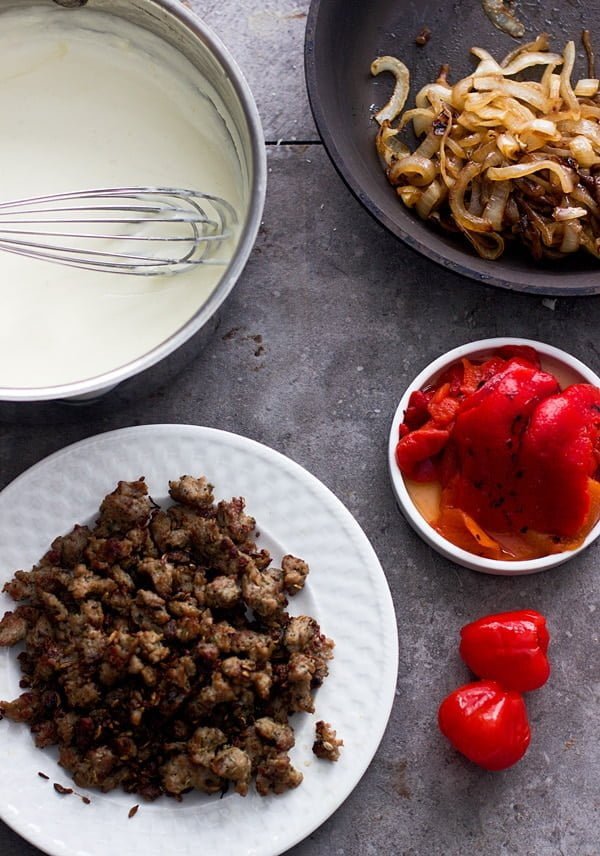 I’m sure at this point you’re thinking in your head, well you have them all backed up right?? Ummm the answer to that is maybe? I did sign up for a program a while back, but I’m pretty sure I just did the free trial, so after the first month, my photos and hard drive were most likely no longer being backed up.

I finally decided that enough was enough and spent the better part of my Saturday morning with a Genius Apple technician trying to figure out why after deleting 50,000 pictures that my memory was still almost at full capacity. Turns out, not only do you have to delete the photos from your I Photo library, you also have to delete the trash. Yep, I’m the braniac that didn’t even think to look in the trash on her computer.

Clearly, computers and technology are not my strong suit. 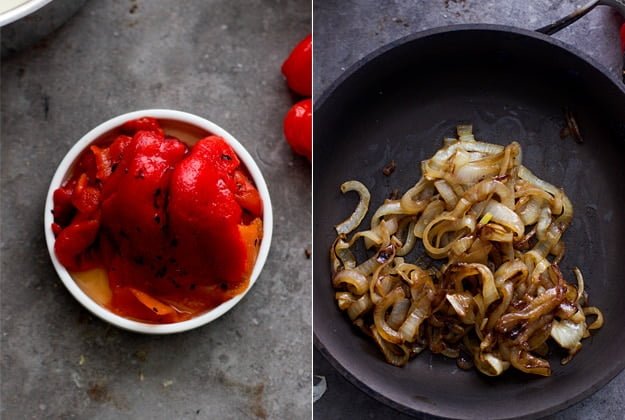 The good news is that I got every single one of my pictures back, the bad news is that I had to go through all 70,000 pictures and keep two or three photos of each recipe before I could upload any new photos for the post today. The process took me a solid 12 hours, but now I have every single picture I could ever need, and yes, I bought a back-up. I’ve learned my lesson, I’m going sort and back up as I go now, no procrastinating.

On a high note, I did feel pretty accomplished when the computer guy told me I officially had the most photos he’s ever seen on a computer…ever. So there’s that. 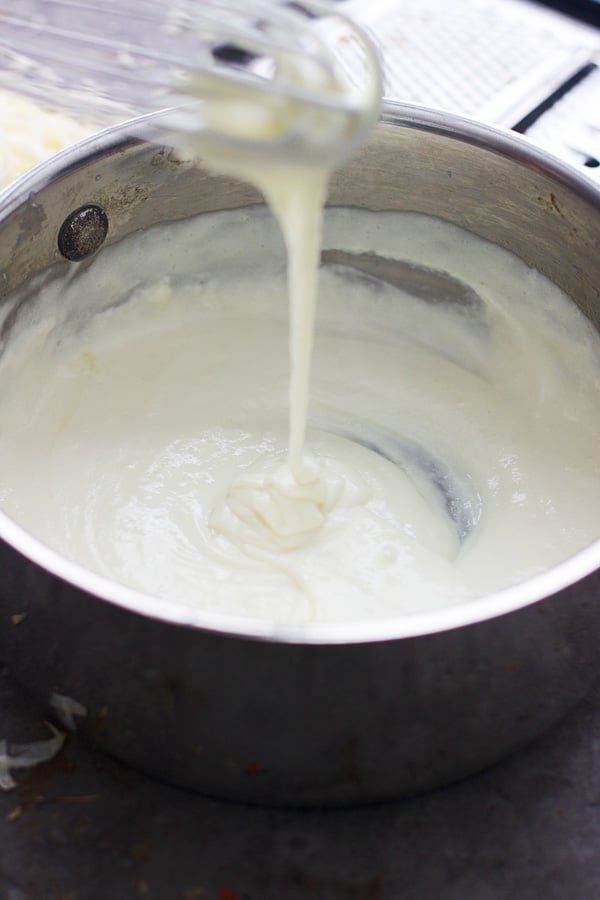 Now that I’ve explained my ineptness when it comes to computers, let’s get to today’s post.

I know we’re past football season and all, but March Madness is coming up, which is a pretty big deal around these parts, so I’m guessing we’ll be getting together with friends during each round, and I’ll need to be armed with some serious party food to accompany me.

I’m kind of a snob when it comes to nachos; I absolutely loathe the nacho cheese from a can you find at ballparks, and wouldn’t touch it with a 10 with a ten-foot pool. For me, nachos need to use REAL cheese and have so many toppings, you can barely see the chip. I also despise when you get a platter full of nachos and all of the toppings reside neatly on top. You know what I’m talking about, when all of the sour cream or all of the chicken is in one area, and everyone’s eyes and fingers make a beeline for those two or three chips that have the most toppings on them.

To me the perfect nacho encompasses two simple rules:

1. There must be layers of toppings in between each row

2. Each chip needs to be covered in cheese 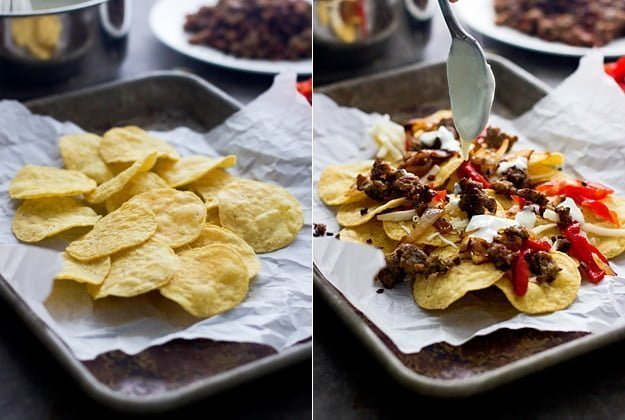 While most nachos are relatively fuss-free, these are more of an upscale version which require a bit more attention to detail, if you will.

The cheese factor for one, comes in two different forms. First in the form of a homemade provolone cheese sauce, and second, in the form of shredded provolone for sprinkling over each chip. (Again ensuring each and every chip is covered in queso.) It may seem like a lot of work to make your own cheese sauce, but trust me, it couldn’t be easier, and the liquid form of the cheese makes the nachos irresistibly messy and well, perfect.

Next, super sweet, buttery caramelized onions. These are so addictive, and while, yes, they do take a little bit of time to make, it’s worth it in every possible way. I especially love the way they taste with the nutty provolone cheese and how they’re like little magnets, adhering to each and every chip. 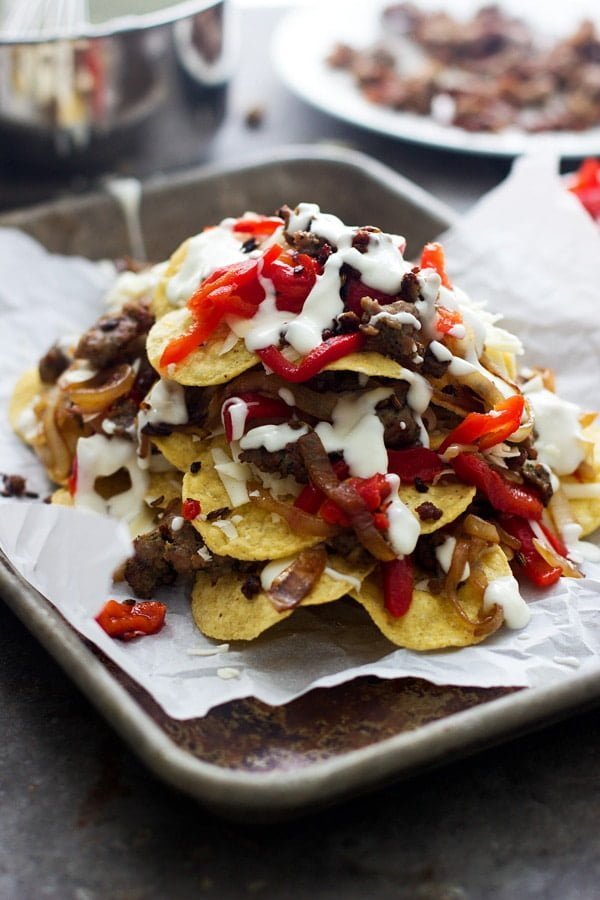 In sticking with the “Italian” themed nachos, I went with some jarred roasted red peppers I sliced up thinly, a little bit of sweet and spicy peppadew peppers and loads of turkey Italian sausage to finish the toppings off. Of course you can swap out a pork Italian sausage for the turkey, but we have a great local company who makes the best turkey sausage on the entire planet, so I use it almost exclusively in place of the full-fat stuff.

Assembly goes a little something like this. Layer of chips. Cover in shredded cheese. Sprinkle with onions, peppers and sausage. Cover in cheese sauce. Repeat three more times. 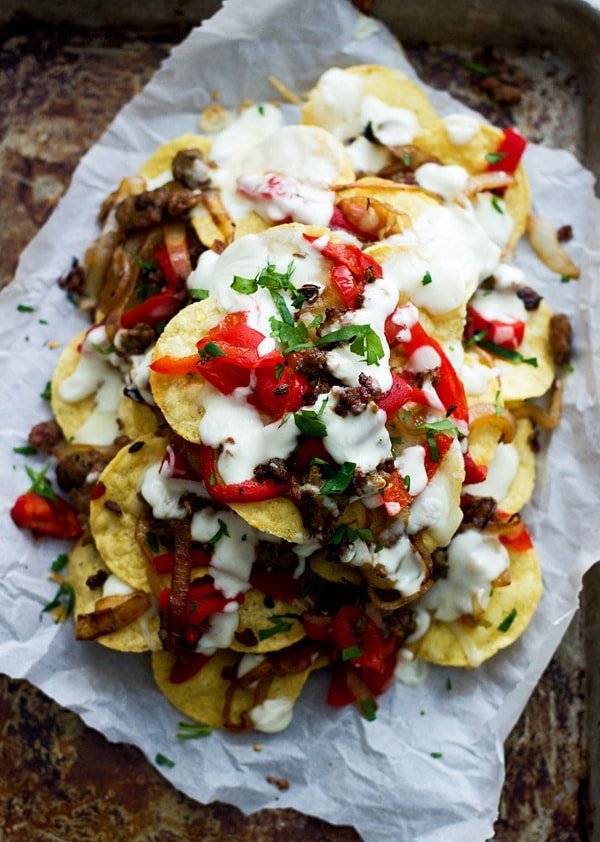