Pad Thai Salmon has all of the flavors of a classic pad Thai, but skips the noodles in lieu of sautéed veggies nestled beneath a crispy filet of salmon. Quick, easy, and healthy! 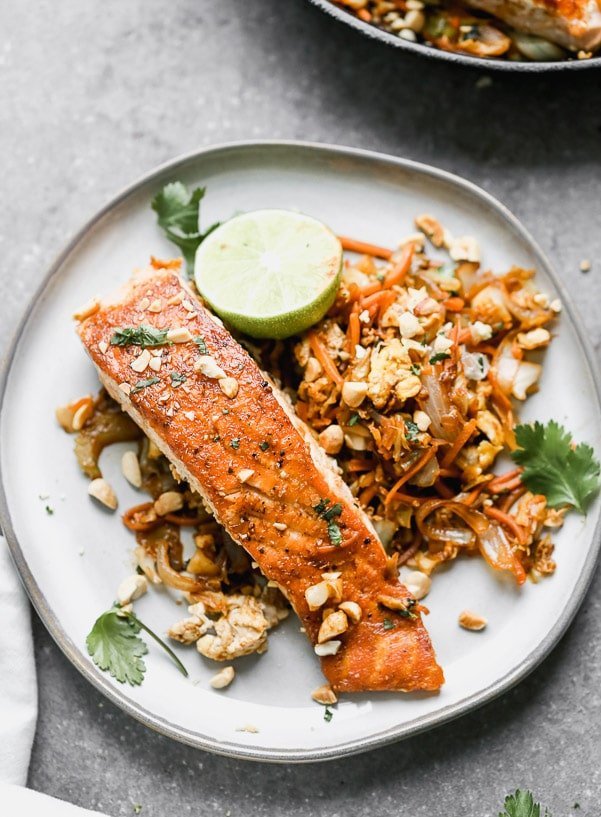 When you turn classic pad Thai into Pad Thai salmon, you take out all the guilt associated with eating a bowl full of noodles, completely out of the picture.

Because Pad Thai Salmon forgoes the copious amounts of rice noodles for a lovely blend of cabbage, carrots, and cilantro, all bathed in the same sweet, salty, and tangy sauce that comes with a traditional bowl of pad Thai.

Also happening? An irresistibly crispy filet of salmon that’s seared and then brushed with the same classic sauce. The salmon is nestled on top of the saucy vegetables, sprinkled with as many chopped peanuts as you want, and served to hunger diners. Aka. Your family.

In short, it’s basically a healthy pad Thai. And if you’re into healthy eating this new year, then you must add this to your list of light, but still delicious meals you’ve got lined up. (If you can’t give up carbs completely, I’d suggest checking out my Quinoa Pad Thai, an equally delicious version of pad Thai made with, you guessed it, quinoa instead of rice noodles.) 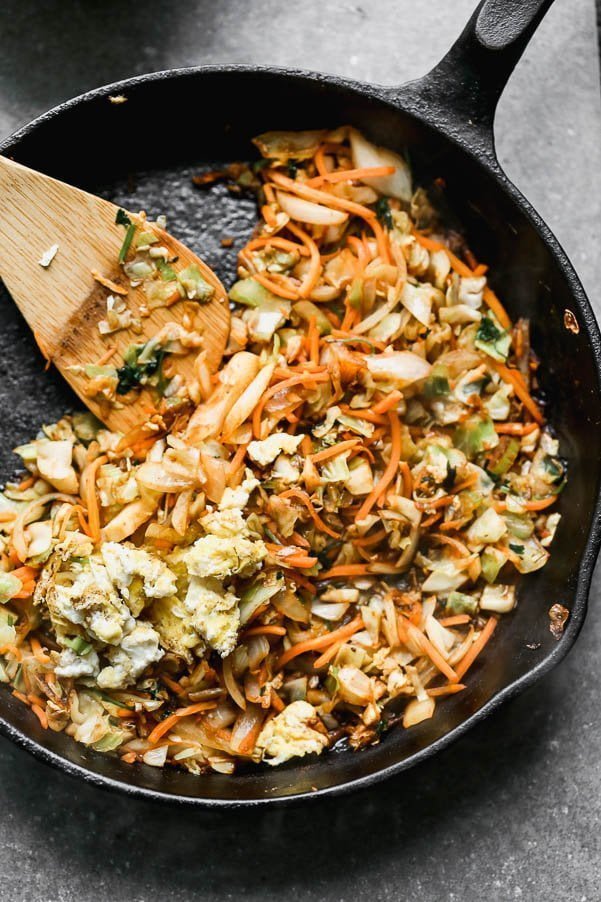 Tamarind. Ok, what exactly is tamarind? Tamrind is an essential ingredient in a traditional pad thai sauce. In this version of thai salmon, the ingredient is still necessary, but more sparingly. Tamrind itself is a fruit. The fruit is then processed and turned into a paste with slightly sour notes, similar to lime. It’s super thick in consistency, and usually needs a little bit of sweetness to heighten the flavor. It has the most unique flavor and is used in a lot of Asian cooking, but most commonly in traditional pad thai.

You can find it in most grocery stores, but if you can’t you can also order here

or at a local Asian market.

Soy sauce. Again, since this is Pad Thai Salmon and not a traditional pad thai, I use a little bit more soy sauce than a traditional recipe calls for. I have kiddos with sensitive palates, so a heavier hand of salt is usually what I need to make nudge them into eating something adventurous like pad thai salmon.

Brown sugar. Brown sugar evens out the sour notes of tamarind paste, it also helps to thicken the sauce a little bit when cooking and give it sticky-esque texture.

Fish sauce. So this is ingredient with an acquired taste. I don’t like to use enough to be able to pull out the hints of seafood, but I do like to use it to enhance the flavors of the tamarind, soy sauce, and brown sugar. It adds a savory element to the pad thai sauce you won’t be able to mimic with anything else.

Lime. A little squeeze of lime juice both in the sauce and during plating finish off the dish.

Chicken stock. I like to use just a touch of chicken stock so the tamarind, fish sauce, and soy sauce aren’t so concentrated. 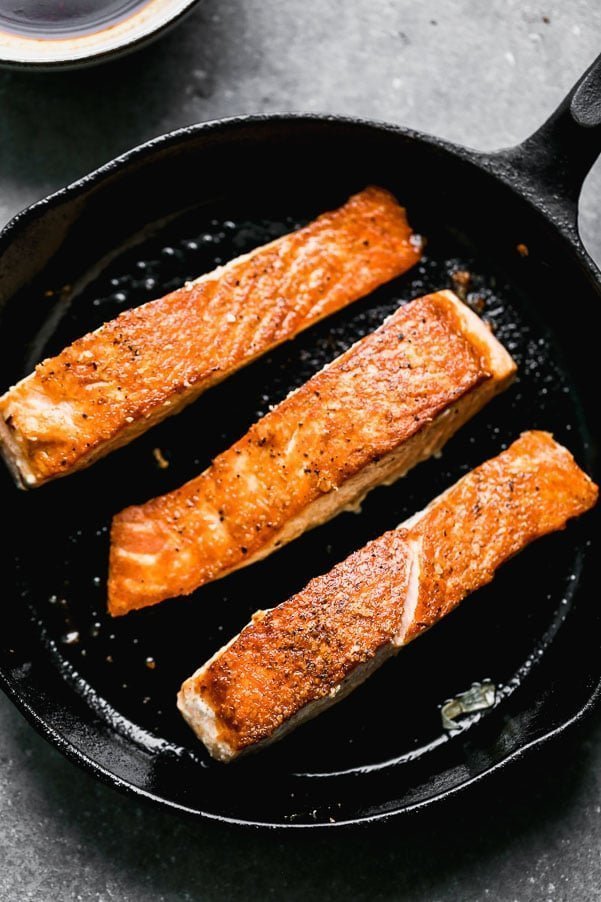 How to make Pad Thai Salmon

Sear the salmon. Pat the salmon dry. Season both sides liberally with salt and pepper. Heat a large cast iron skillet to a medium heat. Brush the bottom with two teaspoons of olive oil. Once the pan is hot, place the fish skin-side up (if it has skin) in the pan. Once the salmon is crispy, after about 3-4 minutes, flip and sear on the other side. Cook until crispy, another 2-3 minutes. Use tongs to pull the salmon out of the pan. Place on a plate, skin-side down while you cook the veggies.

Sauté the veggies. Wipe the pan clean from the salmon. Add another two teaspoons olive oil or sesame oil to the pan. Once the pan is hot, add sliced onions. Cook for 2-3 minutes until slightly softened. Add garlic, cook another minute until fragrant.

Add the salad/cabbage mix to the onion and garlic. Stir to combine. Season with salt and pepper. Saute until veggies start to soften, about 3-4 minutes.

Once the veggies are slightly soft, pour in all but 3 tablespoons of the sauce.  Stir the sauce with veggies on a medium-high heat for 1-2 minutes. Nestle the salmon around the veggies. Brush the salmon with the remaining sauce. If needed, place in a 375-degree oven until salmon finishes cooking. About 2-3 minutes.

Garnish. Garnish the salmon with lots of chopped peanuts and fresh cilantro. A squeeze of lime juice would be great as well. 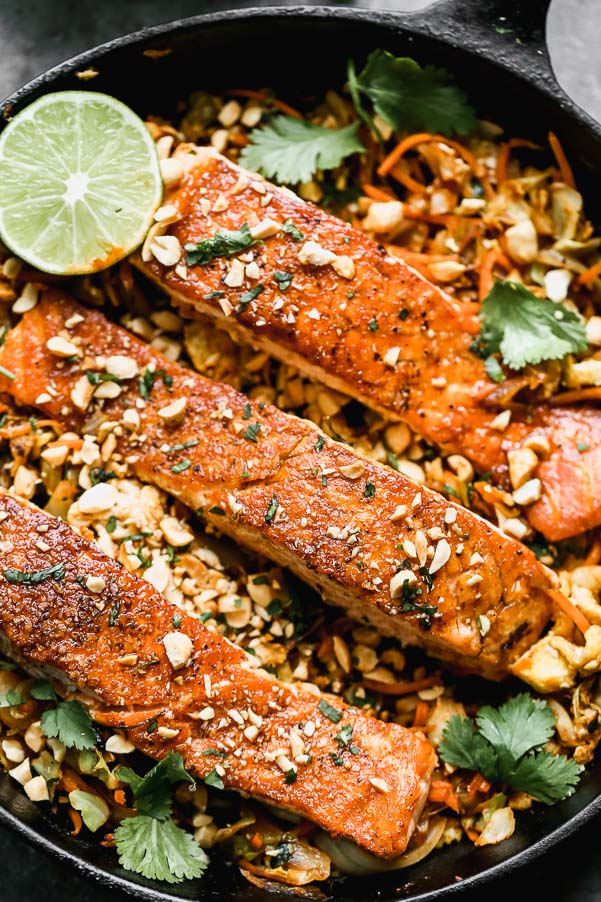 What if I can’t find tamarind paste?

If you don’t plan ahead, this is entirely possible. Whole Foods, of all places, did not have tamarind paste which really shocked me. The last time I made pad thai, I used this method for making a “homemade” tamarind paste and it worked out pretty well. I would also consider combining lime juice and molasses for a tamarin-like taste and texture.

If you love this recipe, be sure to try these! 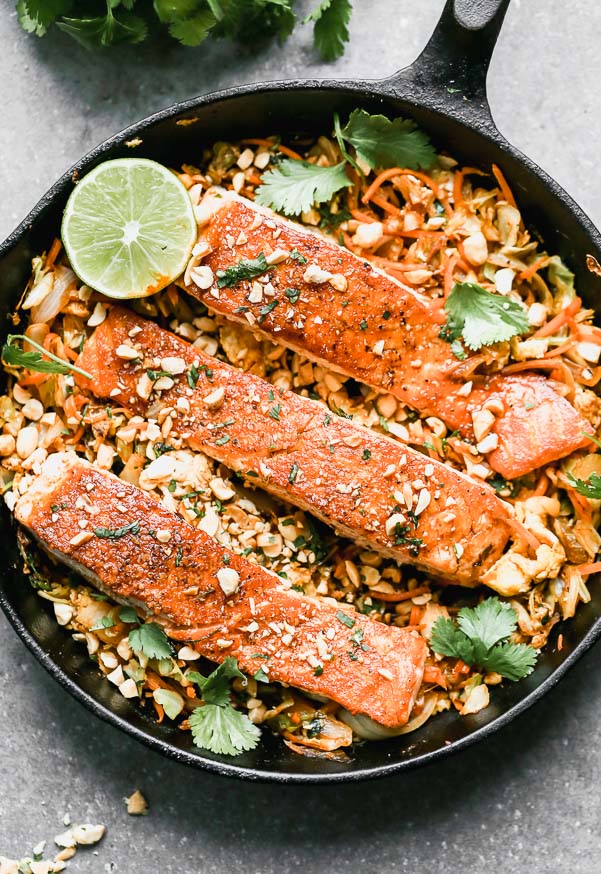 Print Rate Email
Pad Thai Salmon has all of the flavors of a classic pad Thai, but skips the noodles in lieu of sautéed veggies nestled beneath a crispy filet of salmon. Quick, easy, and healthy!
Prevent your screen from going dark
4 people