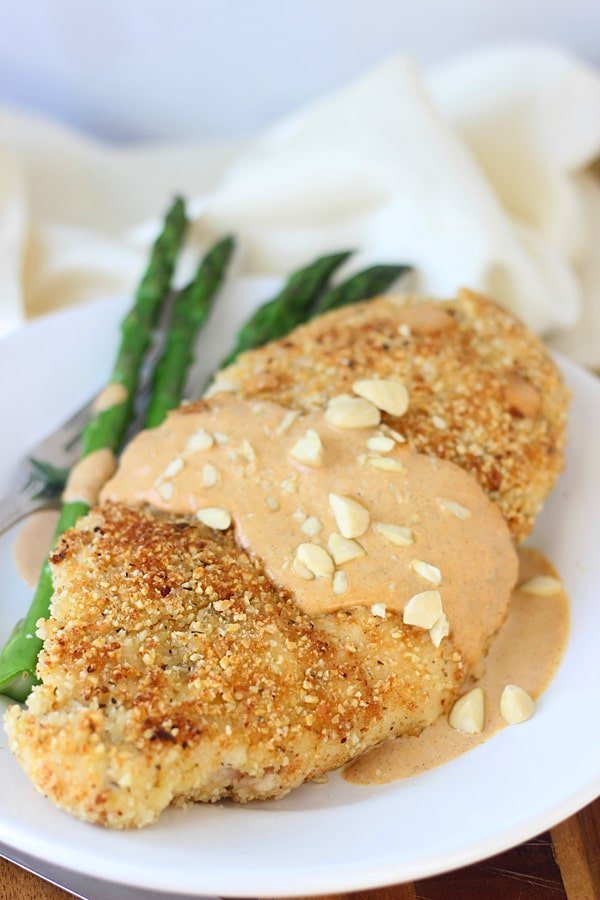 In helping to celebrate McCormick’s 125th anniversary, we’re talking about how flavor and food has (or does) impact all of our lives and I’m taking on the McCormick Go 4 Gourmet Challenge.

I think it’s safe to say that everyone has a story right? Flavor and food is something that’s universal – every family, country, state, religion, ethnicity has a different story. I have thousands of flavor stories, seeing as food and flavor was (and is) something my whole life has pretty much revolved around. Ever since I can remember I’ve bonded with family and friends over food, whether it meant I was cooking for them, they were cooking for me or we were sharing a meal together somewhere else. Some of my fondest and most distinct memories are accompanied by food.

Every time I taste my grandmother’s old-fashioned holiday dressing, it takes me back to Christmas as a child when I’d be her little seasoning tester, almost always advising her to add more salt. When I make my Mom’s spaghetti and meatballs, I’m immediately transported back to our family dining room table, where my brother and I would slurp each spaghetti noodle individually, and consequently splatter sauce all over my Mother’s beautiful placemats and napkins. Each time I smell burgers cooking on the grill, I think of the scorching Kansas summers that were filled with hot dogs and sweet tomatoes drowned in sugar. Even something as silly as seeing a box of cracker jacks evokes memories of playing in my Grandparent’s kitchen as a kid. 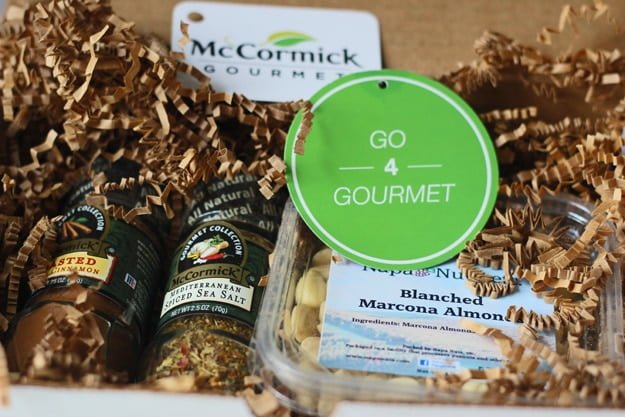 Today, as an adult, I’m still creating “flavor” memories and using food and flavor to connect with the people I surround myself with. I still go over to my parent’s house, where my Mom and I cook together, my Dad smokes meat and we eat, drink and just enjoy each other. I still make hundreds of cookies around the holidays with my Grandmother and Mother (and hopefully daughter someday). I cook meals for my husband with ingredients I’ve never used before. I have my girlfriends over for appetizers and gossip. All of it surrounded by food in some way, shape or form. It’s never ending. 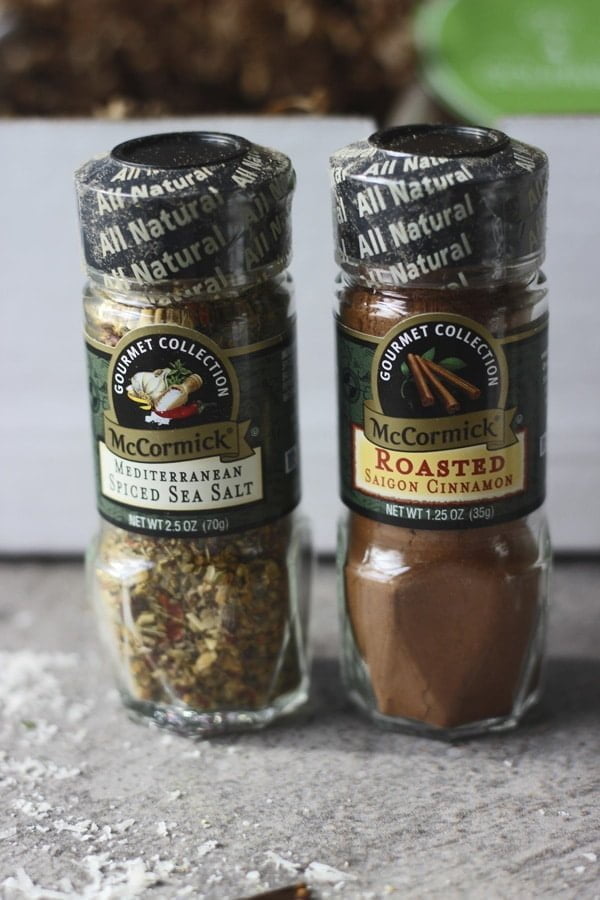 Now for the challenge. I was to come up with a recipe using the ingredients McCormick sent me from their Go 4 Gourmet program; and in my box?

I think when seeing pumpkin, most minds would gravitate towards the sweet, but seeing as I had my fair share of sweets over the holiday, my mind immediately starting churning out savory ideas. At first I was going to go with pasta, but then thought about one of my favorite go-to weeknight meals; a simple crispy chicken coated in panko breadcrumbs. I love it, because it’s super easy and quick, perfect all year round and always delicious. When I saw the marcona almonds, I thought maybe I could transform my go-to into something completely new and just a tad bit fancier, so that’s what I did! 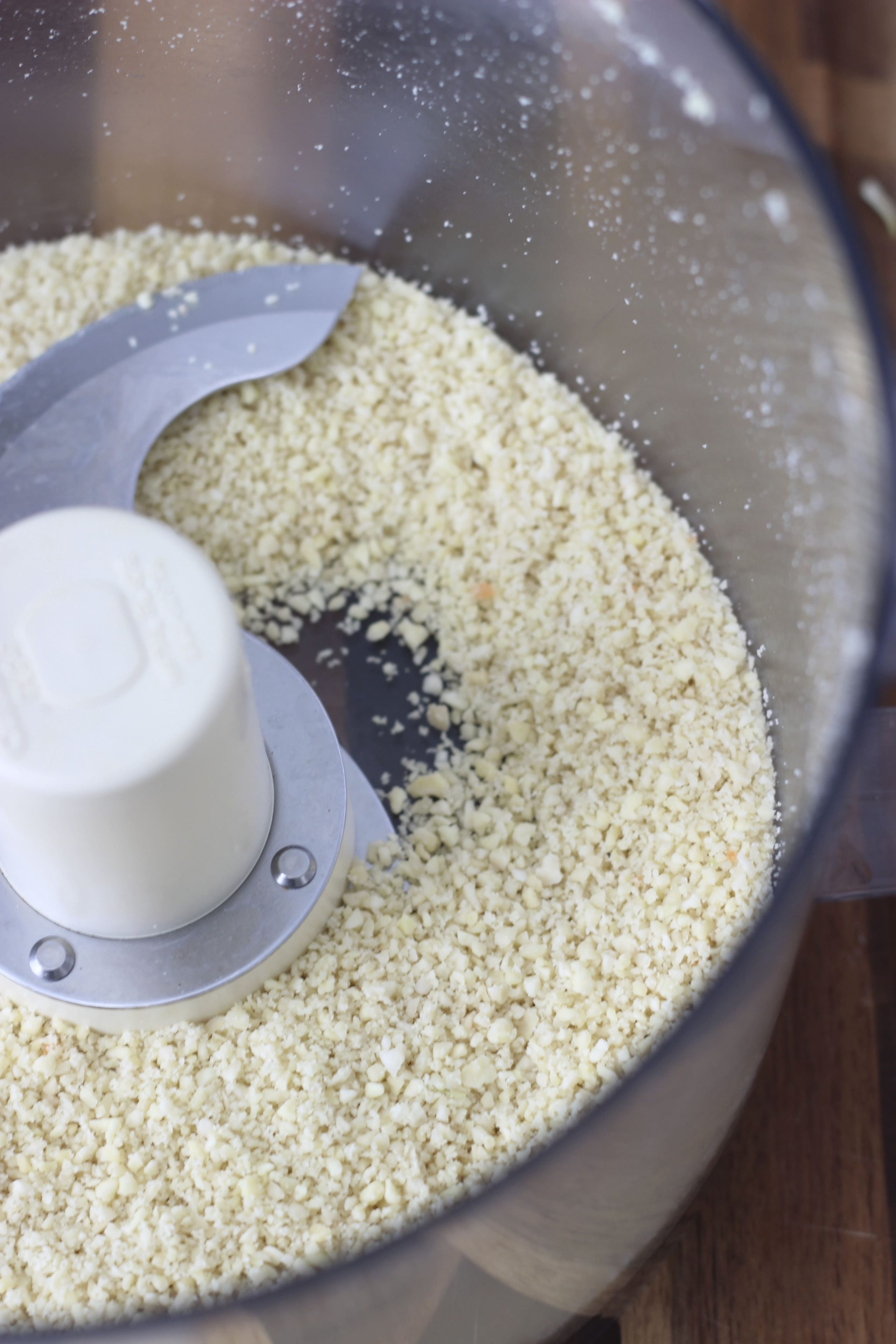 For the breading, I threw a handful of the almonds into the food processor then tossed the ground almonds with a little bit of bread crumbs and the mediteranean sea salt. The chicken gets coated in a little egg white then dunked into the almond mixture and is cooked in a little bit of olive oil and butter until golden brown and crispy. My chicken breasts were ridiculously ginormous, even after I pounded them out, so I finished them off in the oven for just a few minutes, if yours are small enough, they should finish be able to cook through on the stove.

Typically when I do my crispy chicken, I’ll do a quick lemon butter sauce or throw together an easy vinaigrette of some sort to drizzle over, but this time I knew the chicken would pair perfectly with the pumpkin and cinnamon; so I whisked the pumpkin puree with a little bit of cream (you could also substitute half and half), the Saigon cinnamon and a little bit of parmesan cheese.

And wowza, is this sauce to die for. Creamy with a subtle warmth from the cinnamon, just a hint of pumpkin flavor and a tad nutty from the parmesan cheese. The cinnamon really adds a depth of flavor that I love, it’s almost too subtle to even distinguish what the spice is, but you know something is there in the background. 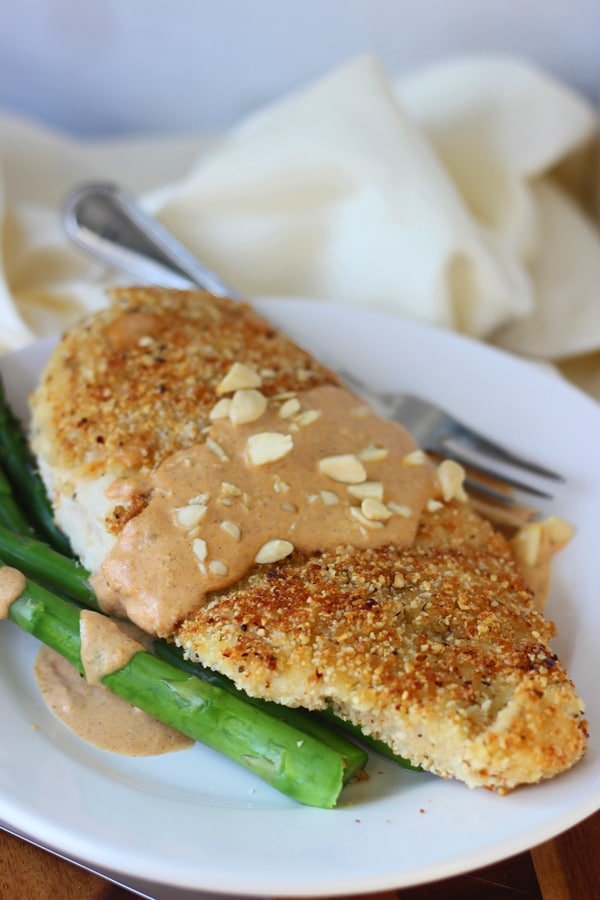 I see a cinnamon pumpkin lasagna in Cooking for Keeps’ future…..

Be sure to check out all of the other flavor stories and entries on the McCormick’s anniversary site, everyone’s story is different! 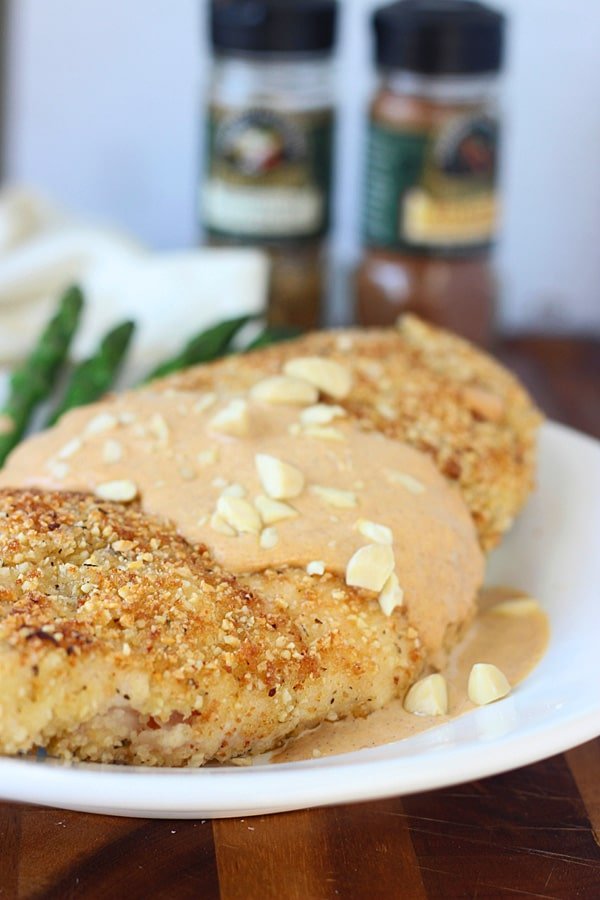 5.0 from 1 reviews
Almond and Sea Salt Crusted Chicken with Cinnamon Pumpkin Cream Sauce
Print
Author: Nicole ~ Cooking for Keeps
Serves: 2
Ingredients
Instructions
3.2.1263
This post was kindly sponsored by McCormick Gourmet as a part of their 125th anniversary and Go 4 Gourmet Challenge. All opinions and thoughts, of course, are my own.
(Visited 2,113 times, 1 visits today)
Quinoa Pad Thai Polenta Bites with Sherried Mushrooms, Asparagus and Parmesan