If I closed my eyes and pictured what the ultimate plate of comfort food would look like, something very similar to this Beer & Balsamic Braised Pork Cavatappi would pop into my head. 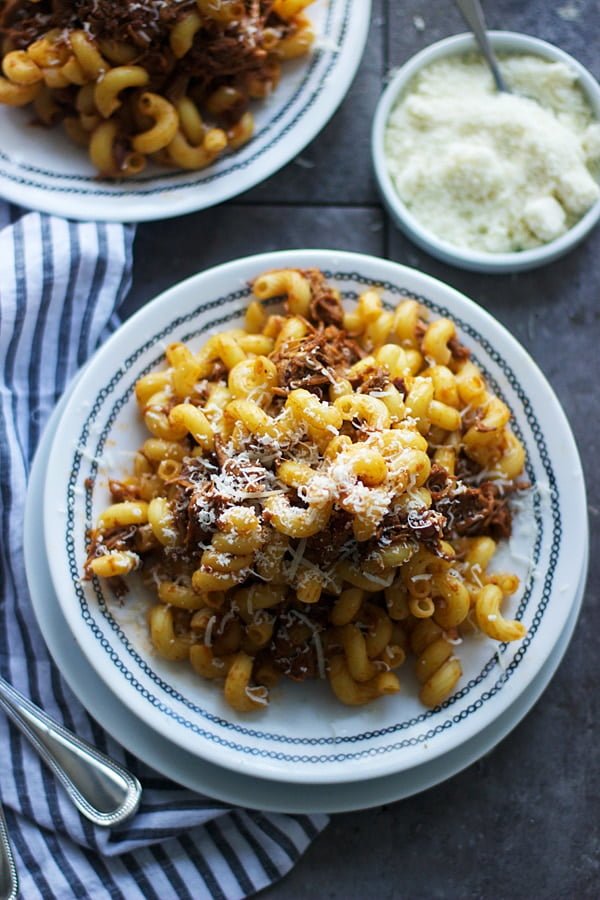 Which is kind of ironic, because I’ve never really been one to blindly order a meat-heavy sauce; in most cases when given the choice between strands of fettuccine smothered with creamy alfredo and a mountain of spaghetti and meatballs, I’ll choose the cream sauce without even so much as giving a second glance to the latter. Contradictorily, when asked what the more comforting meal of the two is, I’d choose the meat-based sauce – go figure.

Does that even make sense?

It’s not that I don’t like meat sauces, I do. In fact one of my favorite meals of all time is this spaghetti and meatballs, and clearly it’s all about the meat. I think I just tend to gravitate more towards cream-based sauces purely out of a childhood habit. As a kid, alfredo sauce was typically reserved only for special occasions, so now that I’m an adult, the inner-child in me is going wild knowing I can have it whenever I want, wherever I want, and no one can tell me otherwise. 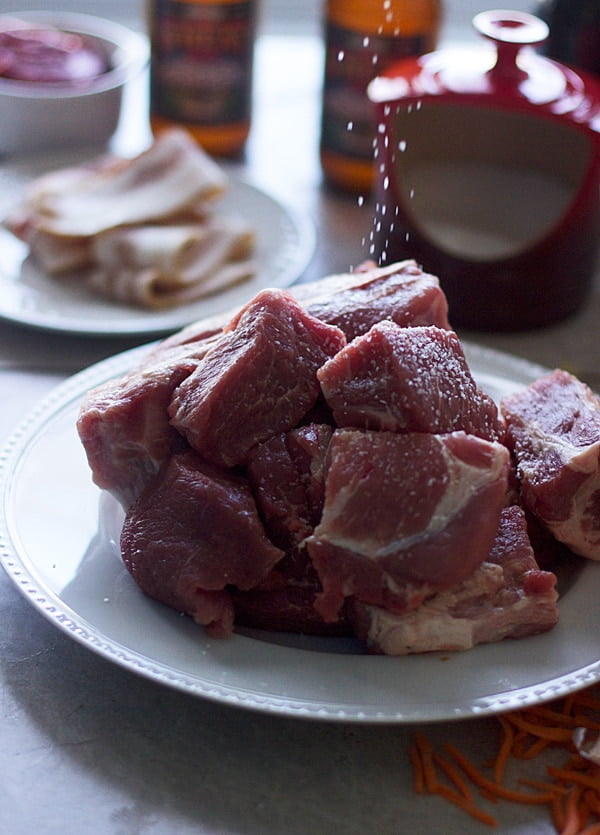 But, also because I’m now an adult, I appreciate and adore a good meat sauce, even if I have to pry myself away from the alfredos and carbonaras of this world. There’s just something to be said about a sauce that’s been simmered all day long and lovingly prepared from the instant you sear the meat, to the moment a fork easily breaks it up into tender melt-in-your mouth pieces. 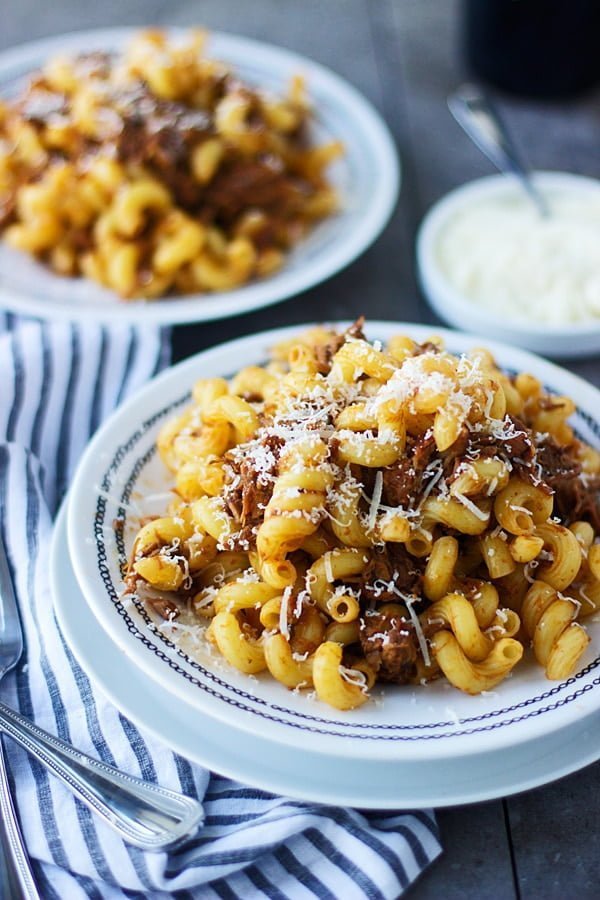 Of course the first (and essential) step in a braise is to get that nice crust on the meat, but instead of using a canola or olive oil, I browned up a few slices of bacon, and used the rendered fat to get the job done. When in doubt, use bacon, right?

The next flavor base comes from a mixture of onion, garlic and carrot that’s pulsed in the food processor to become a sort of paste – a little trick I learned form miss Lidia Bastianch. Puréeing the mixture, helps to evenly break down the veggies, ensuring the meat is what shines through in the end, but also contributes loads of flavor to the end product. 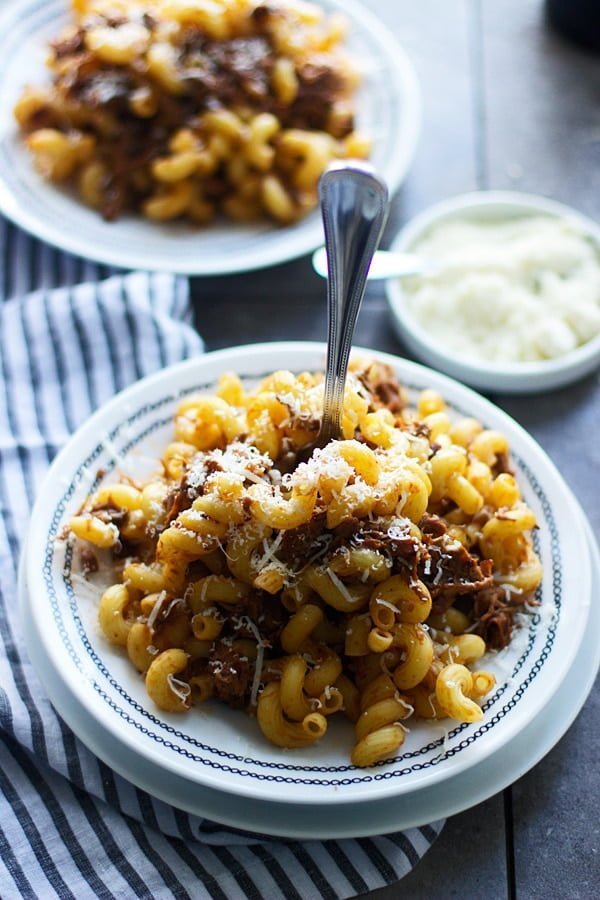 I wanted this particular meat sauce to have a slightly different flavor profile than a typical meat ragu, so instead of using red wine and crushed tomatoes, I went for a sweet, but acidic balsamic vinegar and pungent wheat beer. As I slowly poured the beer into the pot covering the balsamic vinegar and vegetables, I wasn’t entirely confident the flavors would work together (cue panic mode, and the sick feeling of having to throw out four pounds of perfectly succulent pork). It’s not often that you see balsamic vinegar and beer paired together, so I was – to say the least – relieved when I tasted the sauce post-braise and the flavors turned out perfectly. Whew.

Once it’s removed from the oven, the pork is shredded and the hearty sauce is tossed with one of my favorite pastas, cavatappi. I like to cook the pasta until it’s just slightly under aldente, since it finishes cooking in the sauce. And as I do in all my pastas, once the pasta is done cooking I reserve a cup or so of the pasta water, just in case I need a little bit to loosen the sauce up. A sprinkle of parmesan cheese finishing the whole thing off.

Now, I will forewarn you, this makes an obscene amount of pork. You’ll probably need two pounds of pasta noodles, so if you’re feeding a crowd, perfect. If not, you can do what I did and divide the sauce evenly, serve the first half and then cool and freeze the second half in a freezer zip lock baggie, so you can have a comforting pasta dinner in a jiffy down the road. 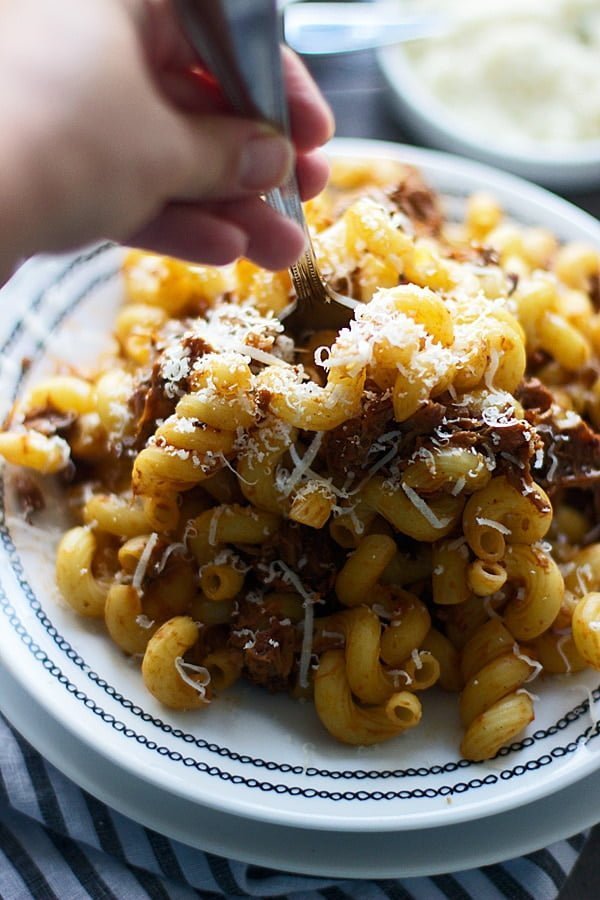 If that doesn’t scream comfort, I don’t know what does.