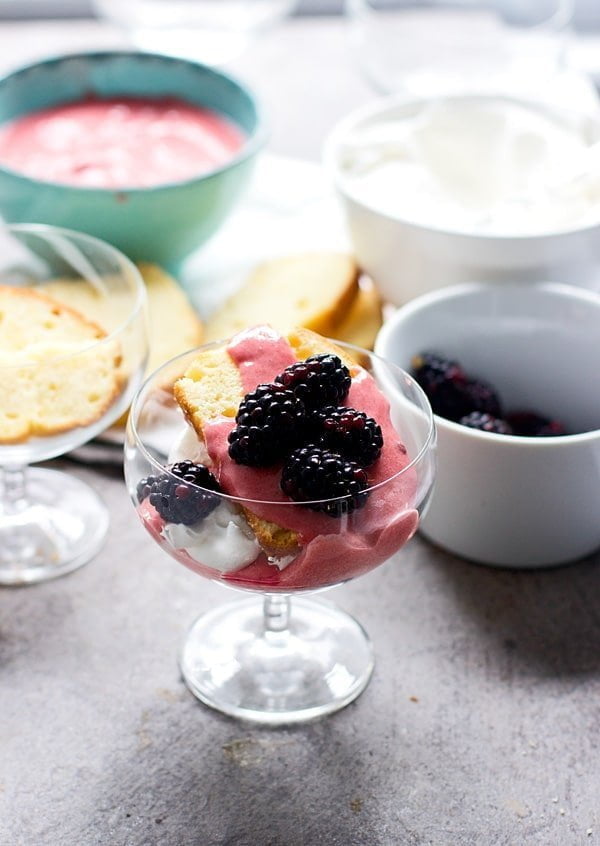 Whether it’s a ripped pair of jeans with a fitted white t-shirt and a dainty gold necklace.

A humble cup of black coffee.

Or a seemingly modest, but seriously flavor-packed tomato sauce with spaghetti, the simple things in life always seem to be what come out ahead – at least for me.

The same goes for desserts. When it comes to sweets, sometimes all it takes to satisfy my sweet tooth, is a small piece of dark chocolate, a scoop of plain vanilla ice cream with hot fudge sauce or a bowl full of berries slathered in store-bought cool whip – not the most swanky of desserts, but it works for me.

Today’s blackberry curd trifles are the perfect example of simplicity at its finest, but to the naked eye, appear to be the opposite. 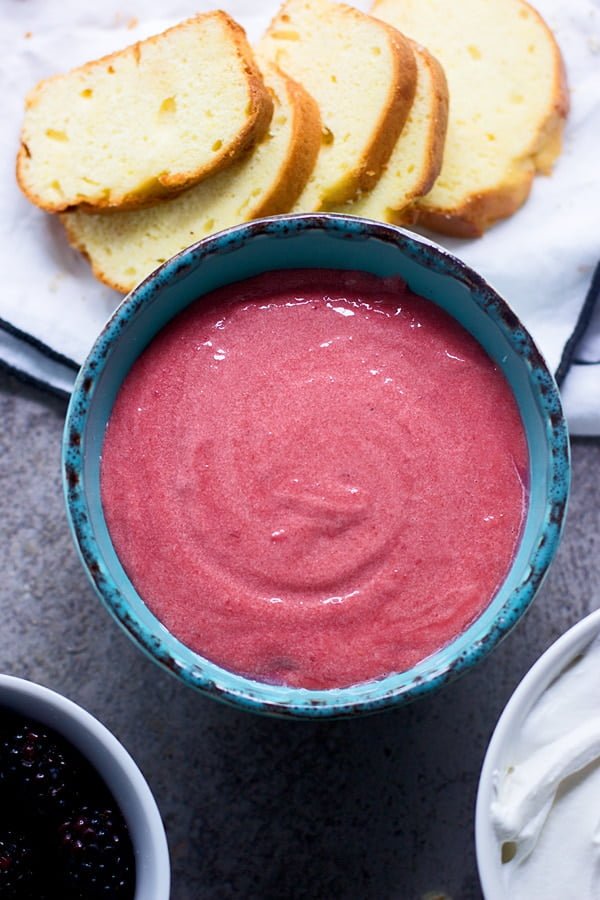 As a self-proclaimed savory food enthusiast as opposed to a sweets fiend, I’ve found in the last six months, I’ve been increasingly more into sweets. In the cooler months chocolate was my go-to, but as the spring roars on and the days become warmer and warmer, I find myself craving lighter, citrus and fruit based desserts. I’ve been craving a lemon dessert for the last couple of weeks, but when I spied black berries on sale for 99 cents, I knew immediately I wanted to make a hybrid lemon and blackberry dessert.

Since lemon can be a little too pungent for some taste buds, I thought the combination of blackberry and lemon in a curd would be the perfect compromise of sweet and citrusy without forming a permanent pucker on those less than enthusiastic about the robust flavor of lemon. 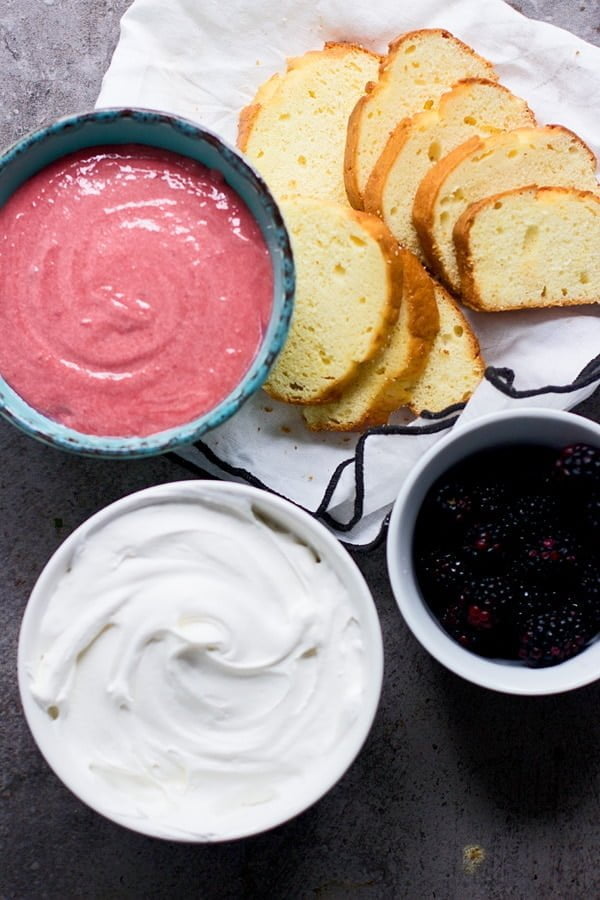 Curd is one of those “sauces” that throw people for a loop, but couldn’t be easier to put together as long as you have a little bit of patience. For a simple lemon curd you basically just throw all of the ingredients together, and cook them over a double broiler. To make this a blackberry curd, I started out by cooking down a cup or so of blackberries in a little bit of water. Once the juice were released, I pushed the pulp through a fine-meshed sieve and then combined the juice with egg yolks, lemon juice, and plenty of sugar.

Just as a traditional curd is made, all of the ingredients go into a heatproof bowl and are cooked over a double broiler until the mixture has thickened and the egg yolks are cooked. You want to be sure to not overheat the mixture, otherwise you could end up with scrambled eggs; slow and steady wins the race here. Once the mixture coats the back of a spoon it’s removed from the heat and finished off with a couple pats of butter.

The curd is transferred to an airtight container, popped into the fridge until its chilled and its ready to go. 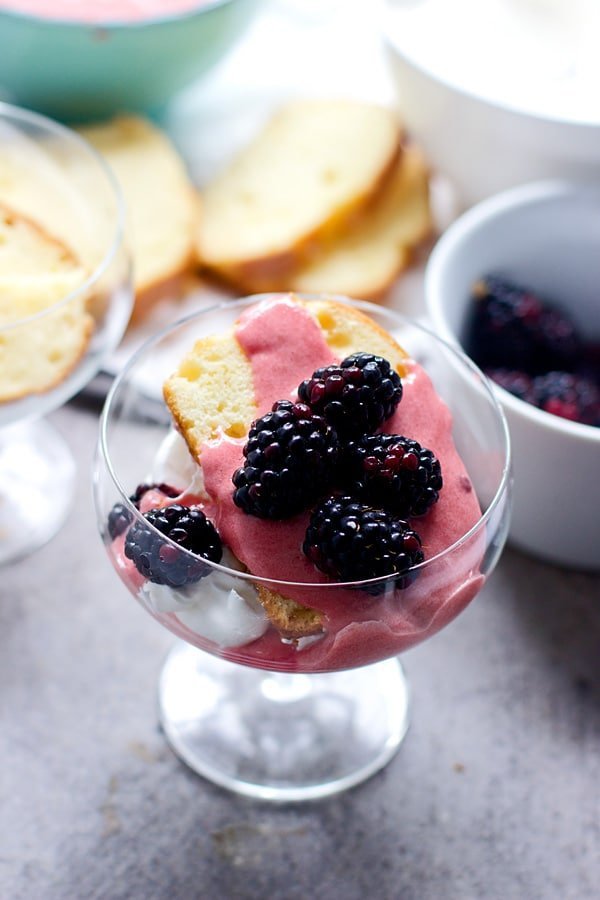 For today’s particular dessert, I took some major help from the market, with store-bought pound cake and frozen whipped topping (it’s a nostalgia thing), but if you’re not feeling as lazy as I was, you could absolutely make your own whipped cream; in my opinion whipping up your own pound cake would be a waste of time as my grocery store seems to have perfected it.

I was originally going to layer all of the ingredients in one giant trifle bowl, which would be lovely to serve for a crowd, but since it’s just Kevin and I, I thought I’d individualize them and use pretty dessert cups instead.

A dollop of whipped topping gets put in the bottom of the cup, followed by a slice of pound cake and a generous slathering of blackberry curd. The process is repeated one more time and the desserts are ready to be served.

These guys are sweet and slightly sour. Decadent, but light. And stunningly beautiful to look at.

Simplicity at its finest. 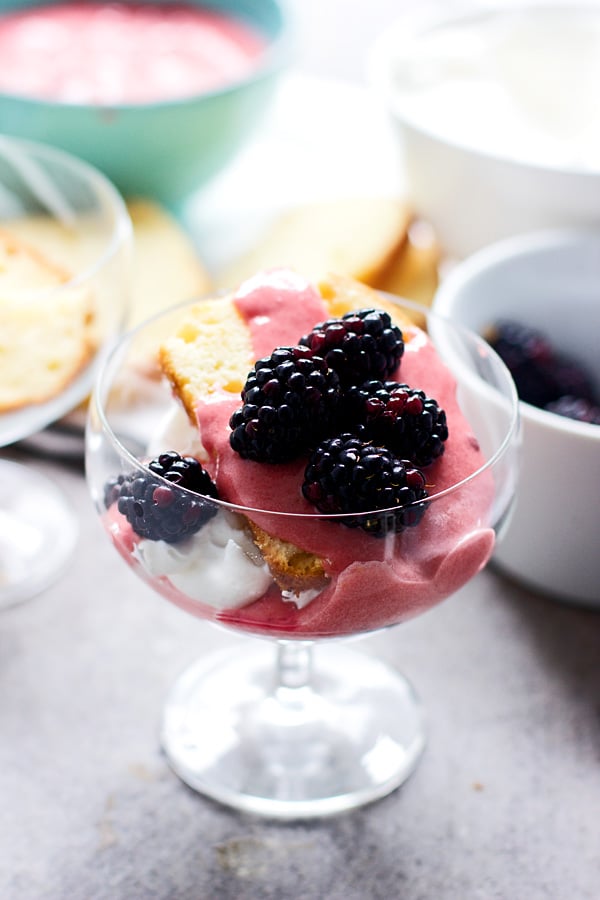