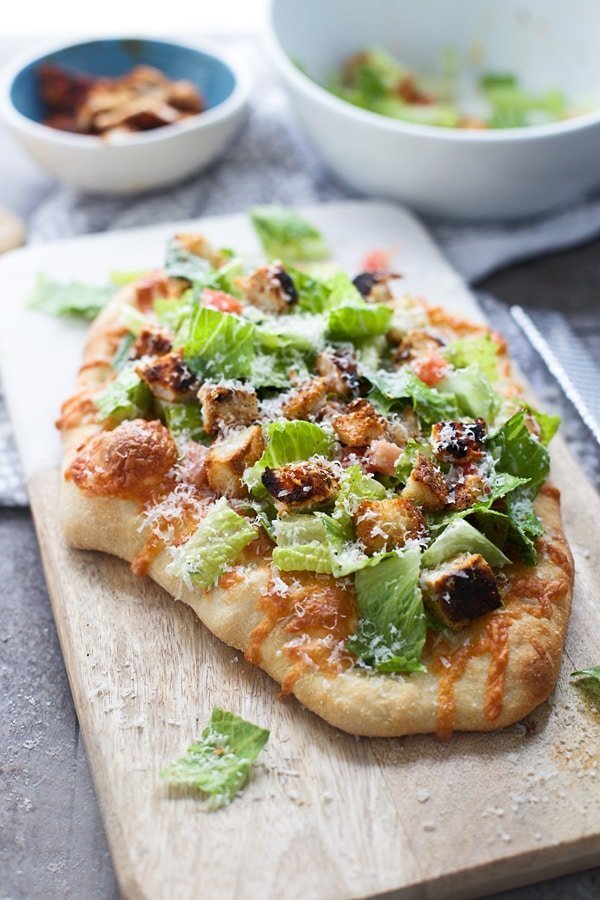 I feel like the classic Caesar salad has been neglected in recent years for swankier, more complicated salads with kale, figs, pancetta, goat cheese, and a million other fancy ingredients. I’m not complaining or anything, because I adore a four-star salad packed with only the best ingredients, but every once in a while, I crave a classic. Something simple I can whip in just a few minutes, with a little bit of lettuce, and only the contents in my fridge. 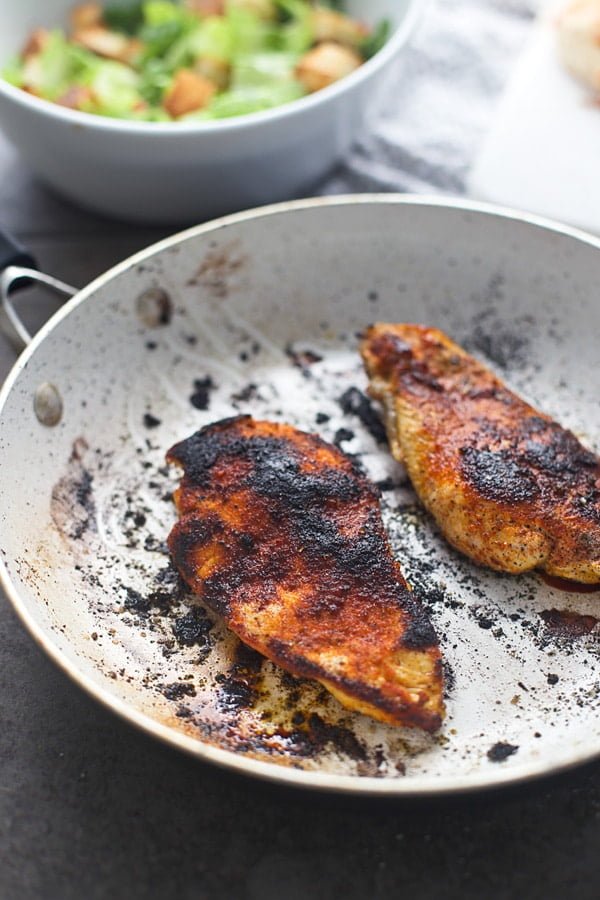 I would guess I break out the Caesar salad as a side about once week, except this time, instead of making it an afterthought to our meal, I decided to make it the main feature by adding a ton of blackened chicken to the mix, and nestling the entire thing on a hot, pizza base covered in gooey mozzarella and parmesan cheese. Because if there’s anything that can make salad a meal, for us, it’s bread and cheese.

The base is simple; store-bought pizza dough (from Trader Joe’s), is halved, rolled out, and brushed with olive oil and a generous hand of salt and pepper. Next, it’s covered in shredded mozzarella cheese, and sprinkled with a little bit of freshly grated parmesan. For me, when making a pizza, a pizza stone is an absolute necessity, because it’s the only thing that can mimic a restaurant-quality pie without a $5,000 pizza oven. The trick is to heat the pizza stone in screaming hot oven for at least 15 minutes, and then to use a pizza wheel covered in flour or cornmeal to transfer the dough seamlessly on to the stone. 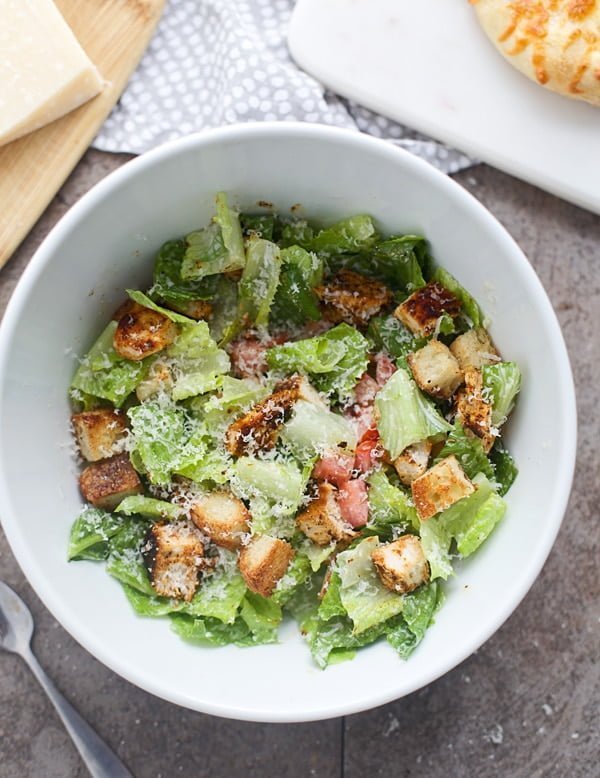 While the pizza cooks, the chicken gets covered in a spice mix of paprika, oregano, garlic powder, onion powder, salt, and cayenne pepper and then gets seared in a hot skillet until the flesh is almost charred and the inside is cooked through. 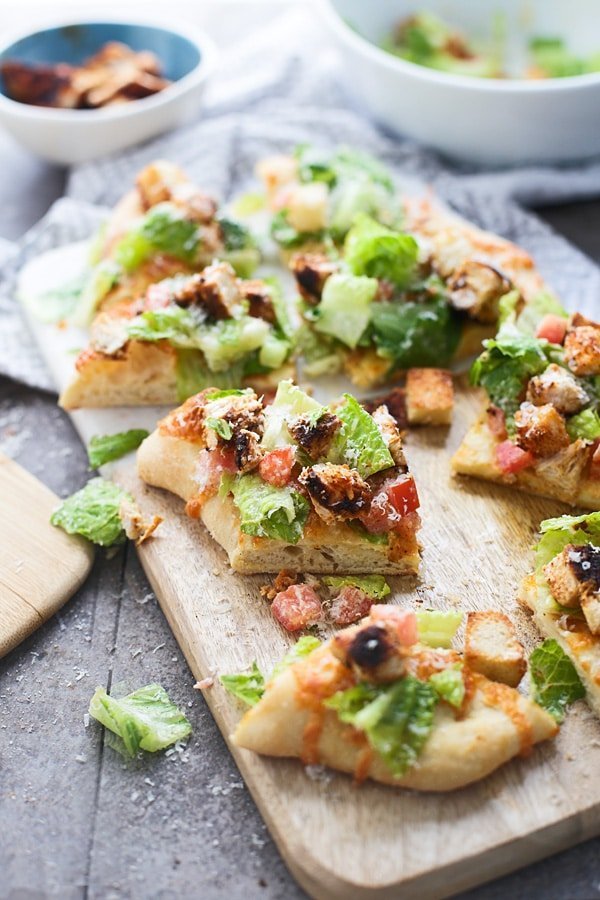 As the chicken cools, and the pizza finishes up, a quick homemade Caesar dressing is thrown together with a little bit of light mayo, lemon juice, fresh garlic, salt, Worcestershire sauce and parmesan cheese. The dressing is tossed with some chopped romaine lettuce, more parmesan cheese, and fresh croutons. Of course, if you stopped here, this would be the perfect salad, but since this is our main meal, the chicken gets tossed in as well, and then all of it is evenly divided between the two cheese pizzas.

I cover it with even more parmesan cheese, cut it into pieces, and then dive in directly on the pizza wheel. 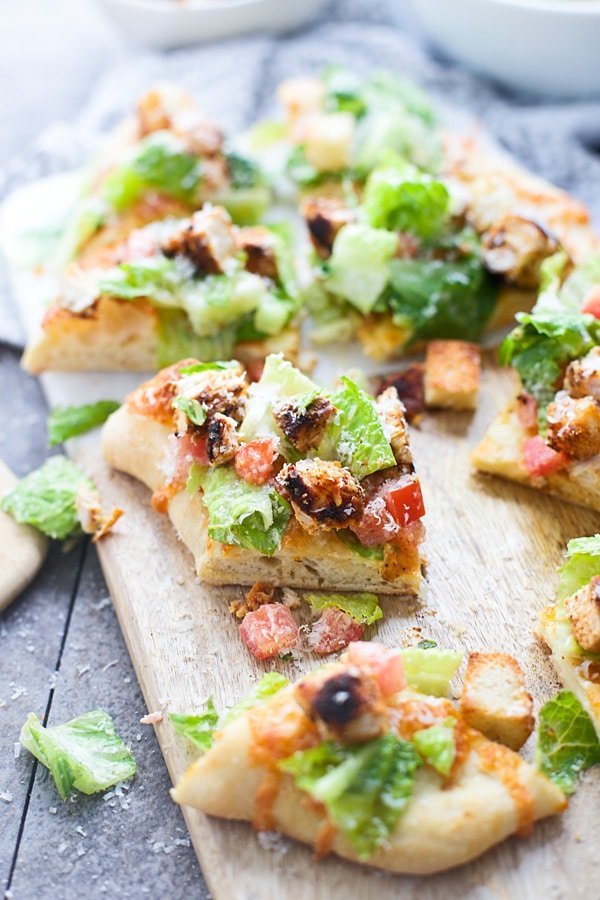