If you want a little taste of vacation,  try out our Blackened Fish Sandwich Recipe. This easy fish sandwich is pan-seared until crusty and blackened on the top and flaky inside, nestled into a brioche bun, and topped with a lime and cumin Brussels sprout slaw. 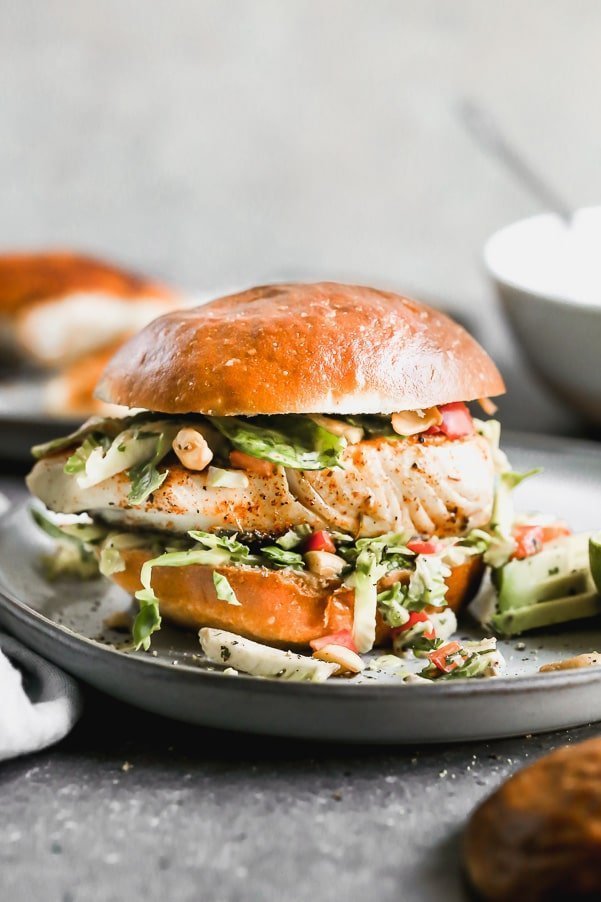 Gosh, there really isn’t anything better than a spicy, pan-seared piece of flaky, moist, perfectly-tender fish tucked into a buttery brioche bun and covered in zippy Brussels sprout slaw.

Unless that buttery brioche bun is slathered with mayo. (This Fish Reuben is pretty close up there as well.)

The choice of mayo or no may is up to you, you can follow my lead on the rest.

While the lime and cumin-laced dressing is working its magic on the shredded Brussels sprouts, you cook your fish – we’re using halibut – in a little bit of butter or olive oil, toast the buns, and then sandwich everything together. From start to finish, you’re looking at a mere 30 minutes of prep and cook time, and that is reason enough to whip this up on a toasty summer night. 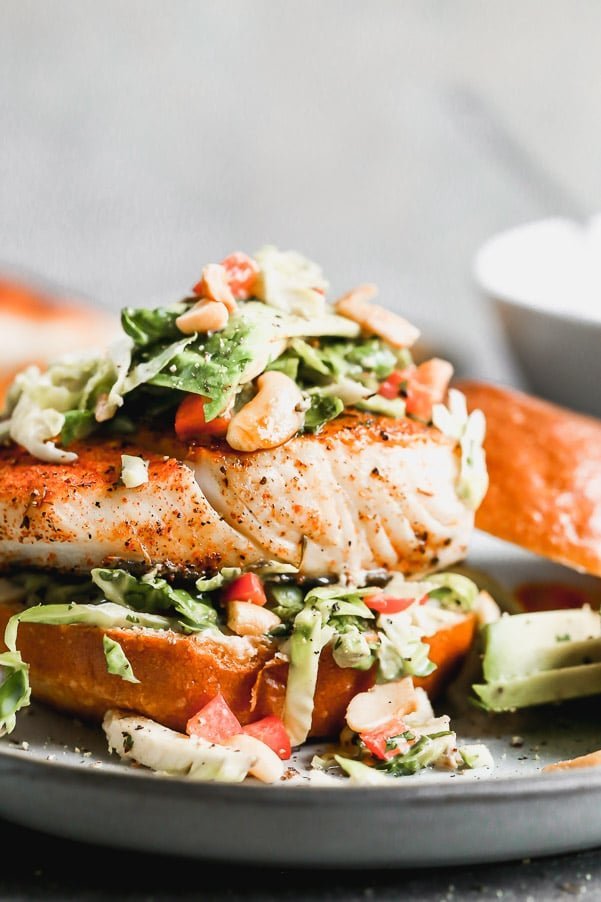 Cumin. I love the smokiness of cumin, and find that it works really well in a slaw. A little goes a long way here, so while I usually use a generous amount, in this case, I hold back a little bit.

Mayo. No proper slaw is complete without mayo, but we use a scant amount, and always use a light version to keep calories down.

Honey. Any time I make a dressing, I almost always add a little bit of honey. It balances out the acid from the lime juice and adds just a hint of sweetness.

Salt and Pepper. A given.

Cilantro.  We’ve got lime, cumin, and spiciness, so there must be cilantro. And if you’re anything like me, there’s  lots of it. Feel free to add as much or as little as you would like. 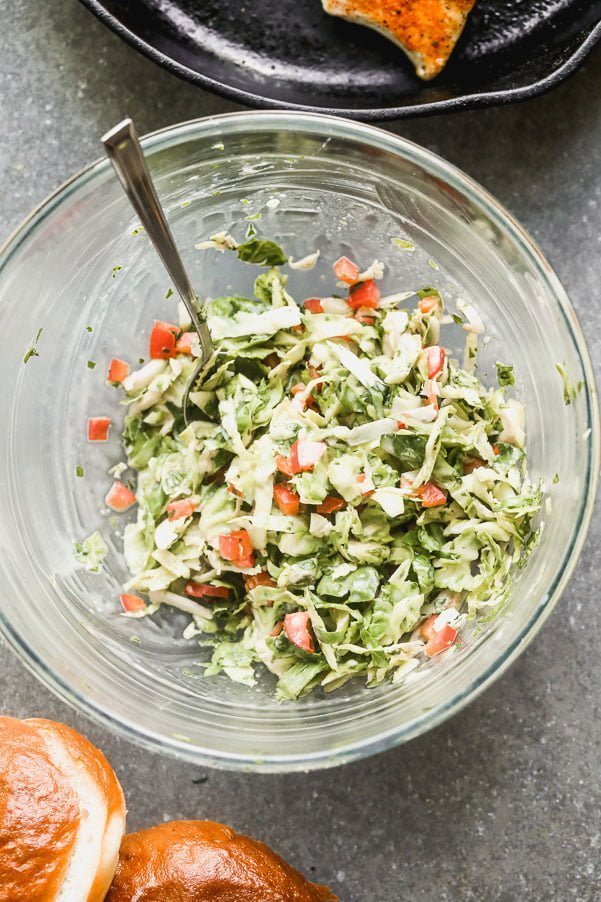 Fish. To make a great fish sandwich, you want a great piece of fish. We used halibut, which is a slightly firm, flaky white fish, but mahi mahi or grouper would be good substitutes. You also want to make sure to buy center-cut filets since they are uniform in size throughout the piece of fish. They also tend to be thicker which works better for a sandwich.

Blackening spices. Normally I throw together my own blackening spices which include paprika, oregano, garlic powder, onion powder, black pepper, cayenne, and salt, but I actually had a jar of blackening seasoning on hand, so that’s what I used.

Olive oil or butter. For the fish to truly be blackened, it needs to be seared in butter, but I often swap out the butter for olive oil so it’s a little more heart-healthy.

Bun. The bun is a big deal on a good fish sandwich, let alone any sandwich. You don’t want it to overpower the delicate fish, but you also want it to be sturdy enough to hold everything together. Our bun of choice is a brioche bun since it’s a little bit more dense than a classic hamburger bun, but still light and super flavorful.

Mayo. I am a sucker for mayo-slathered buns, and this sandwich is no exception. It may seem like an excessive addition, but it’s pretty darn good. Feel free to leave it off.

Avocado. Because avocado is delicious on everything. 🙂

Nuts. Even though the red pepper and the Brussels sprouts have a nice crunch to them, I like to add even more texture with chopped cashews. They’re sweet, buttery, and gosh, they’re good. 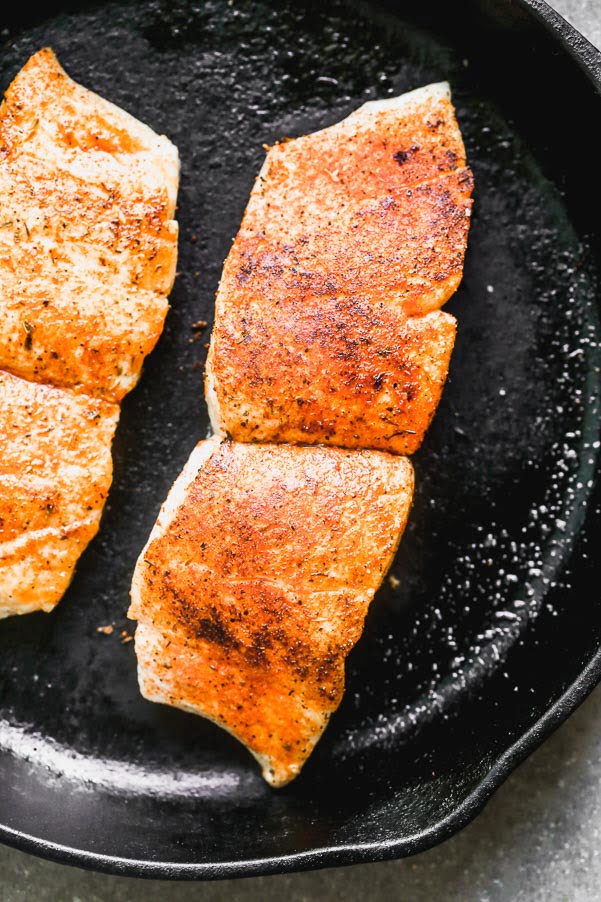 Make the slaw. We make the slaw first, so it has time to soak up all the dressing. Whisk the lime juice, mayo, cumin, salt, and honey together in a medium bowl.

Add in the Brussels sprouts, chopped red bell peppers, and cilantro. Stir to combine. Let it set while you cook the fish.

Sear the fish. Sprinkle the halibut filets with blackening spice on both sides. Heat a large cast-iron skillet to a medium-high heat. Add enough oil or butter to lightly coat the bottom of the pan. Once the oil is hot and shimmers, turn the pan so it’s evenly coated.

Gently nestle the fish into he hot pan, cook 3-4 minutes, flip and cook another 3-4 minutes until cooked all the way through. You will know it’s done when it flakes easily and is white throughout the fish.

How to make your own blackening seasoning

If you have the spices on hand, you may as well make your seasoning. Use the recipe from our Blackened Tilapia with Watermelon Salsa, you’ll need:

Substitutions and Tips and Tricks for Recipes

If you love a good sandwich, don’t miss these other favorites! 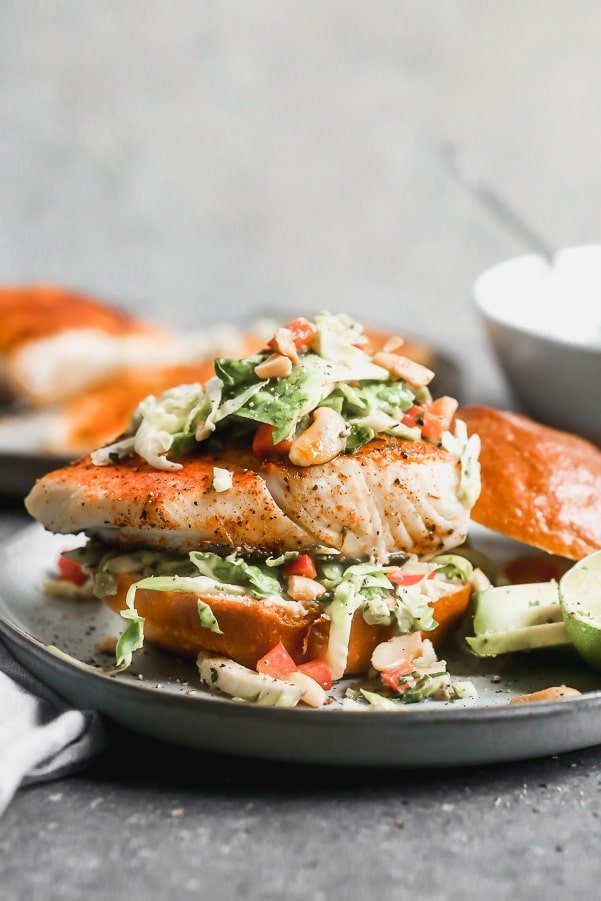 Print Rate Email
If you want a little taste of vacation,  try out our Blackened Fish Sandwich Recipe. This easy fish sandwich is pan-seared until crusty and blackened on the top and flaky inside, nestled into a brioche bun, and topped with a lime and cumin Brussels sprout slaw.
Prevent your screen from going dark
4 sandwiches