Blackened chicken breasts are nestled on to everything bagel buns, topped with an easy spinach artichoke dip and crispy bacon for the perfect Game Day bite. 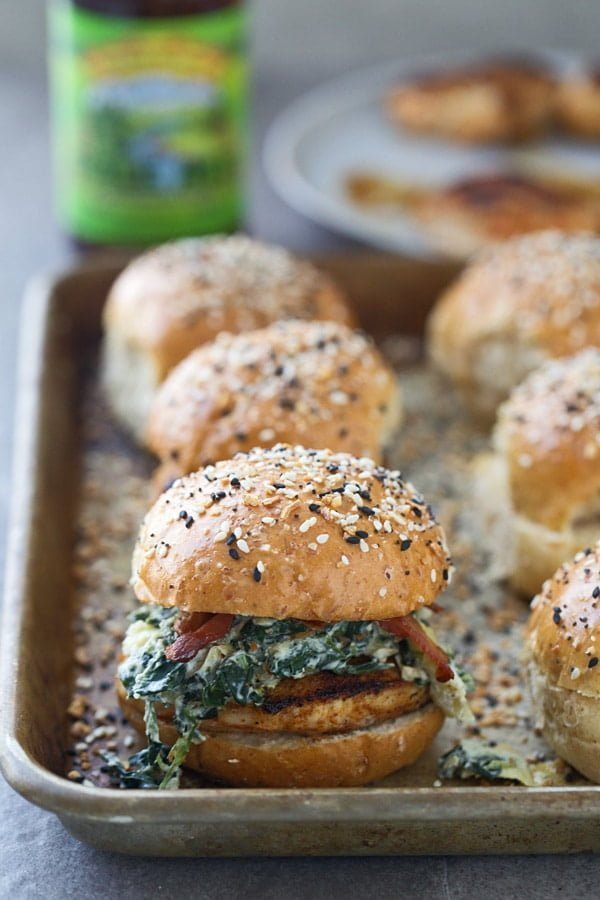 When January rolls around, healthy eating becomes what seems like the one and only thing most people have on their minds. We stick to our resolution of less carbs and less sugar and wish away those extra few pounds we packed on over the holidays for a solid few weeks, and then something else happens. Game day.

Yep. That lone day when men, women and children come together, yell at the TV, drink beer and eat their weight in fried wings, cheesy dips and pigs-in-a-blanket.

What a glorious day – for football lovers and indifferent folks alike. 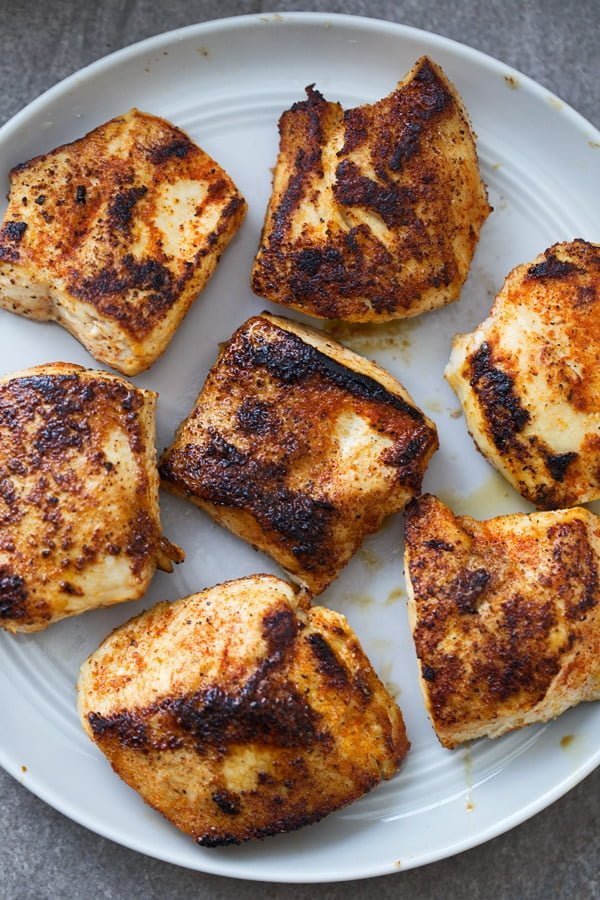 For me, it’s usually the kick-start of yet another bout of indulgent eating with Valentine’s Day right around the corner, so this year, I’m striving to keep things a little bit lighter and indulge in a more responsible way.

If you call these Blackened Spinach Artichoke Chicken Sliders responsible…

While I wouldn’t call these “healthy” by any means, they are put together in a more mindful manner. Instead of using beef as the meat component, I used lean chicken covered in a simple blackening season of garlic powder, onion powder, paprika, salt and oregano for ample flavor.

This version uses the breast, but chicken thigh would also work great and be even more flavorful. You can also add a little bit of cayenne pepper to the seasoning, but since we have a young toddler, I opted to keep it a bit milder in hopes that he’d eat it – he didn’t. 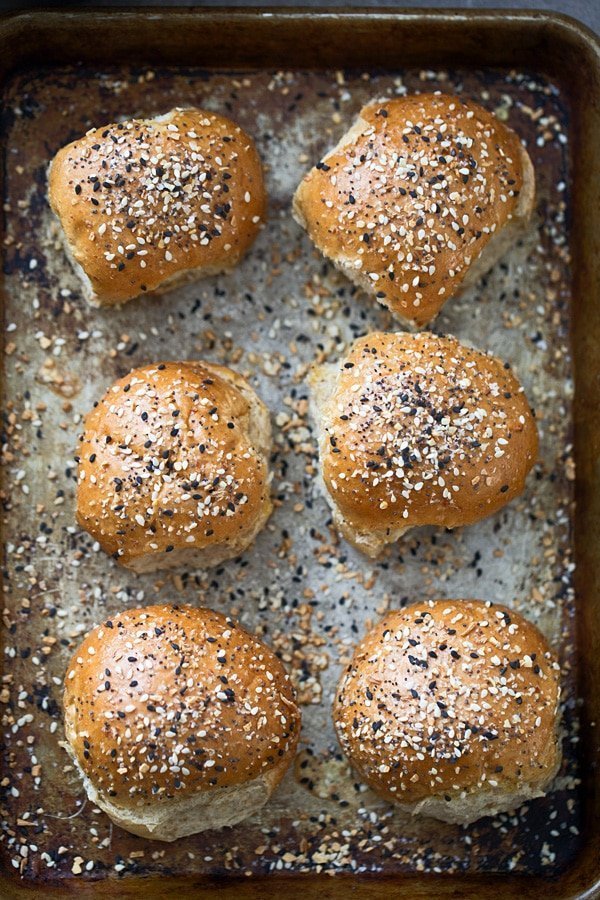 Because the spinach artichoke topping needs some structure to prevent all of it from falling off the slider, I made the mixture pretty thick which in turn cuts down on the things that make spinach artichoke dip so fattening. So instead, there’s just a touch of low-fat cream cheese, sour cream (also low-fat) and light mayo to bind everything together.

Because parmesan cheese packs such a pungent flavor, I only needed to use a scant amount for maximum flavor, along with a little bit of dried mustard and just a hint of nutmeg to compliment the spinach. 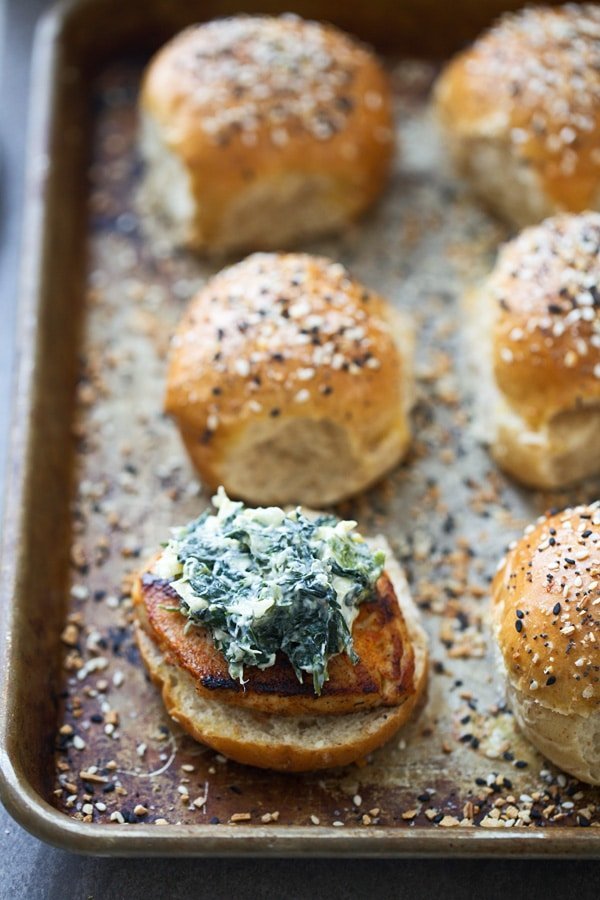 For me a slider isn’t complete without a little bit of texture, so I baked some center-cut bacon to sprinkle on top before nestling the chicken and spinach dip on each bun. If you’re a little weary of center-cut bacon, don’t be. It’s one of the lower fat items I swear by, because it tastes exactly the same as full-fat bacon. It still comes from the pork belly portion of the pig, but as the name implies, it comes from the center instead so it has about 25% less fat. It’s pretty much all I buy unless I really want a thicker cut bacon.

Now, you could nestle all of the ingredients on to a plain slider bun, but again, I was trying to make more mindful choices, so I used a whole-wheat roll and just brushed the top with egg wash and sprinkled it with some everything bagel seasoning I had on hand. If you don’t have any, you could also just sprinkle it with flaked sea salt and some dehydrated onion and garlic for a little more flavor.

Even though these are sliders, I’d say two is the equivalent of a full meal since they’re not super small and are pretty filling.

Pair them with some nachos, a plate of wings and you’ve got yourself a full-on game day spread. 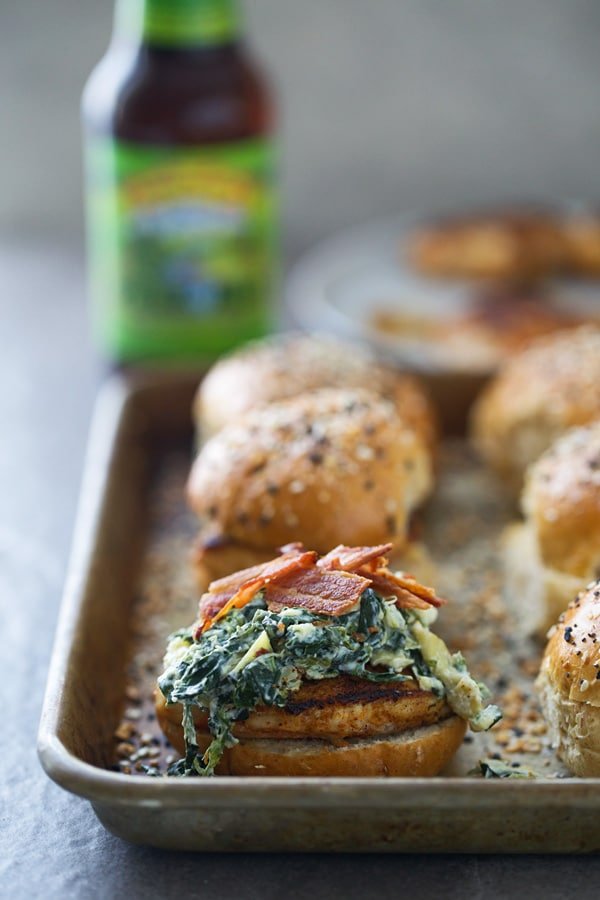 Print Rate Email
Blackened chicken breasts are nestled on to everything bagel buns, topped with an easy spinach artichoke dip and crispy bacon for the perfect Game Day bite.
Prevent your screen from going dark
8 sliders