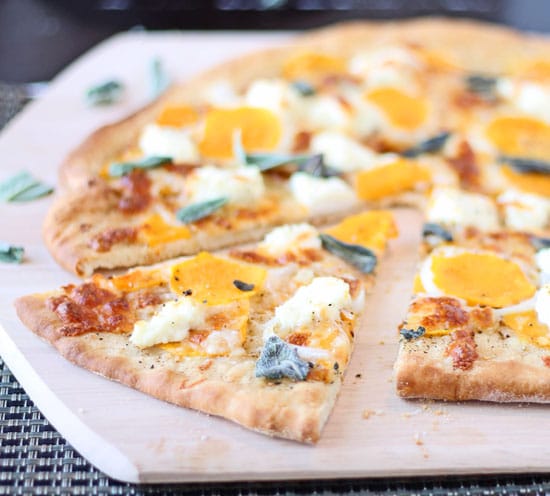 Have you ever heard of that show on the Food Network, The Best Thing I Ever Made? It’s (surprise) a bunch of celebrity chefs describing (duh) the best thing they’ve ever made. I bet you couldn’t infer that from the title.

For those of you that have never seen it, be warned, you’ll be dying of hunger by the end of the short 30 minute episode and consequently want to eat/cook everything in sight – much like every other show on the Food Network.

Side note. I actually use all of the cooking shows on Saturday and Sunday mornings to perpetuate hunger pains strong enough to get me out of bed to make breakfast for Kevin and I. True story. 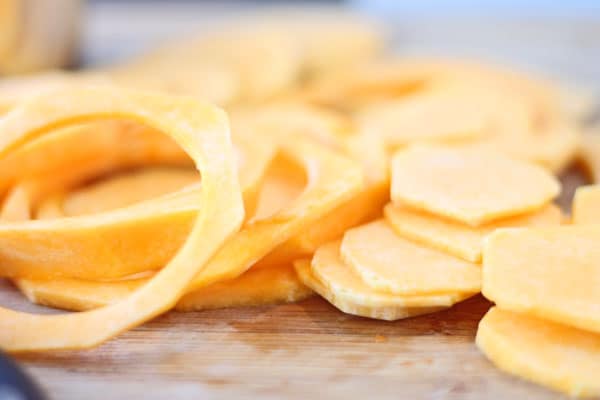 Anyways, there’s always a topic for each episode; it could be breakfast, sandwiches, pasta, comfort food, or pretty much anything under the sun that pertains to food categories.

Well, IF there ever was a pizza addition (which there very well could be), and IF they ever asked me what the best pizza I ever made was – because obviously the Food Network knows who I am – then I would have to say that the best pizza I’ve ever made by a mile was this butternut squash amazingness.

I realize that amazingness is not technically a word in the English language or any language for that matter, but for today it is. 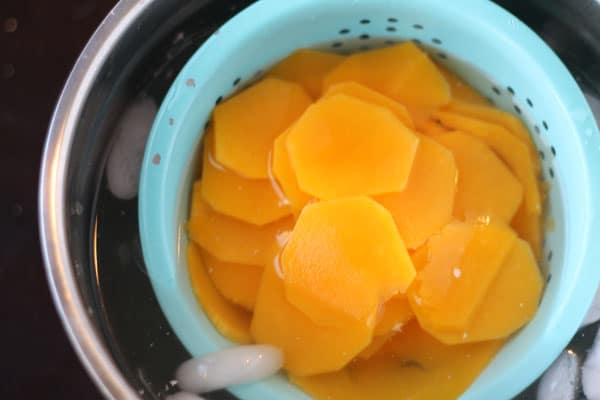 So …I spent my Saturday afternoon making this to-die-for butternut squash pizza with brown butter sauce while simultaneously belting out Celine Dion’s greatest hits. Yeah that happened, just in case you wanted to know.

I’m pretty sure Celine and myself were singing loudly enough for the neighbors to wonder if there was an actual concert going on in the house next door, although they might have also completely forgot about the intensely loud music once they smelled what intoxicating flavors were also coming out of that house. 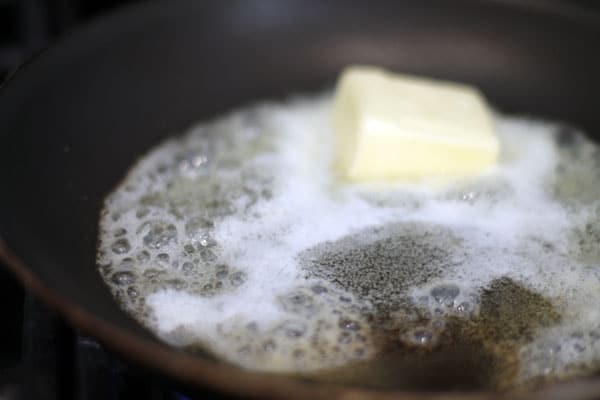 I mean fresh pizza baking in the oven smells amazing on its own, no matter the flavors, but swap out your typical red pizza sauce for a brown butter base and the smells alone will make you weak in the knees and lose all of your willpower to patiently wait for it to be ready.

Now, I’ve talked about brown butter here, here, and here. I guess it’s safe to say that I like the stuff. A lot. I put it on pastas, use it in salad dressings, drizzle it over vegetables, and now I put in on my pizza. Makes sense right?

Next thing you know, I’ll be putting brown butter on my cereal….

Just kidding, I’m not that crazy. 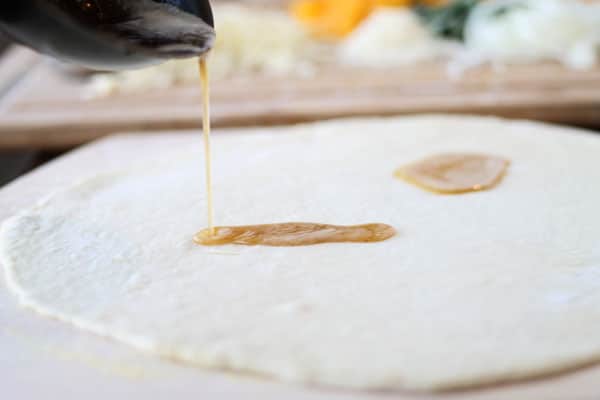 I’ve had this pizza conceptualized for quite some time; I originally created in my head a few years ago to enter a pizza recipe contest and it’s actually a riff on my favorite butternut squash ravioli. I never actually got around to trying the recipe out and therefore didn’t submit it to the contest, but I’ve been thinking about it ever since and finally decided to give it a whirl over the weekend.

Boy, do I wish that I had found the time to enter that contest since I’m fairly certain that I could have been amongst the top recipes. Seriously the best pizza I’ve ever made. 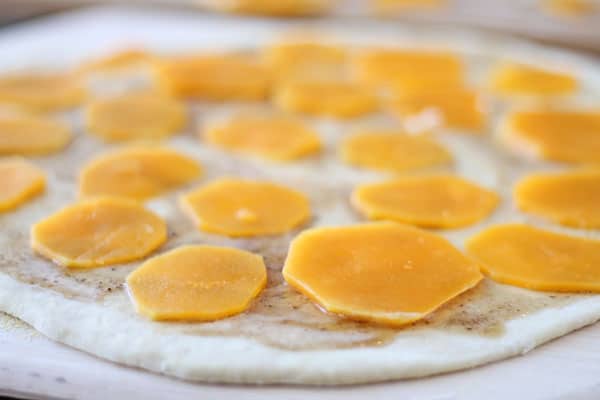 Brown butter is smeared across a thin crust pizza dough, seasoned with a little salt and then topped with thinly sliced sweet butternut squash and yellow onions. Shredded mozzarella and parmesan are scattered across the pie and then dotted with creamy ricotta and fresh sage. It’s then baked in a scorching hot oven, until it’s brown, bubbly and perfuming the entire house. (I swear you could smell the brown butter in every single room in our house.) 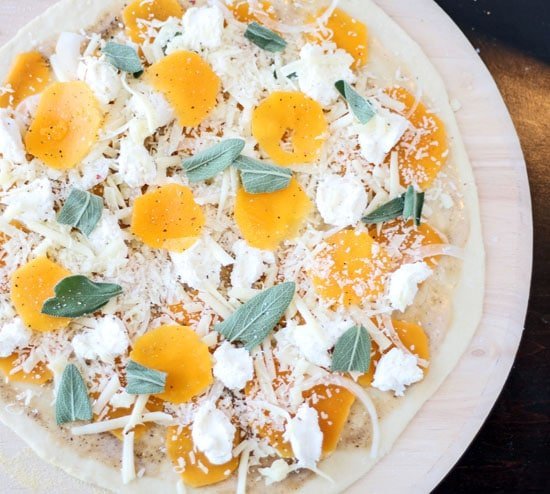 I propose that you hightail it to the closest grocery store to pick up the necessary ingredients and immediately head home to prepare this before it’s out of your head. If this is a little out of your comfort zone, and you can’t fathom straying from the typical idea of a pizza, may I suggest giving a try anyways? Trust me, you won’t be disappointed. 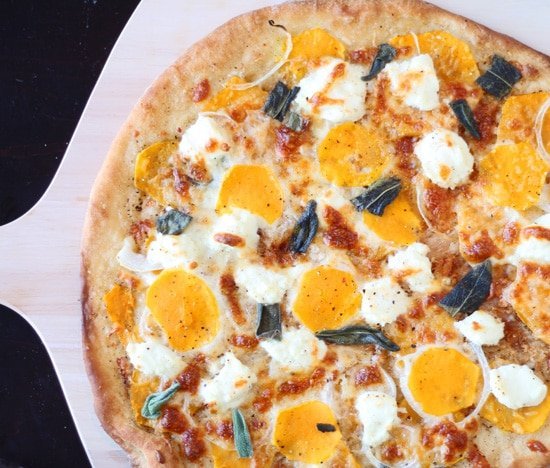 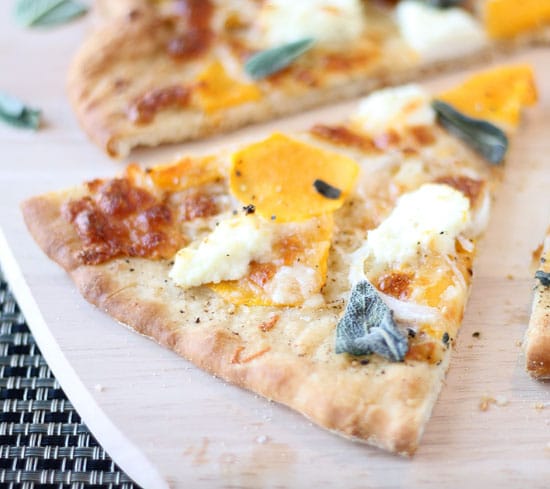 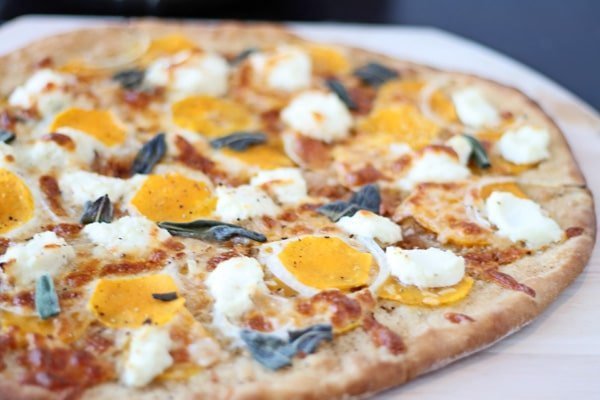 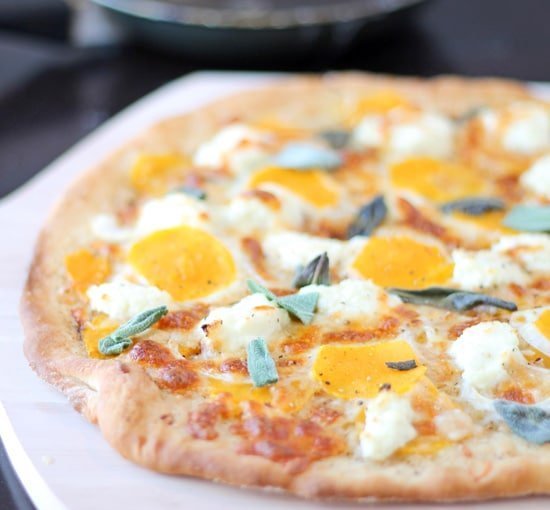