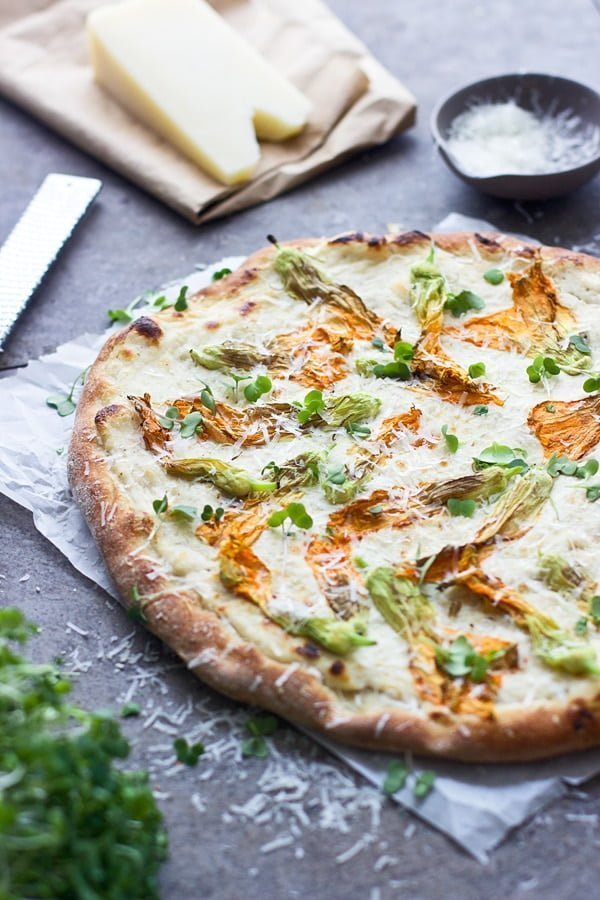 I have a new infatuation. It’s called brown butter ricotta, and I want to slather it on everything. Except yesterday, I skipped the slathering and just went straight to eating it out of a bowl with a spoon. Who knew that pairing homemade ricotta with a few tablespoons of brown butter would yield such ridiculous results?? Although, I should have guessed because when has there ever been a time when brown butter didn’t make something exponentially better??

Why is it that the simplest things are almost always the best things – especially when it comes to food? Of course, I relish in my five-course-tiny-portion-frou-frou food that comes from the highest-rated restaurants, but most times, simplicity is where my heart lies, and my heart definitely lies in this brown butter ricotta.

As aforementioned, I could definitely slather this stuff on just about anything, however, today’s choice of canvas is in the form of pizza. A simple, light, and quintessential summer pizza. One in which my meat-loving husband scoffs at, but one which I adore. 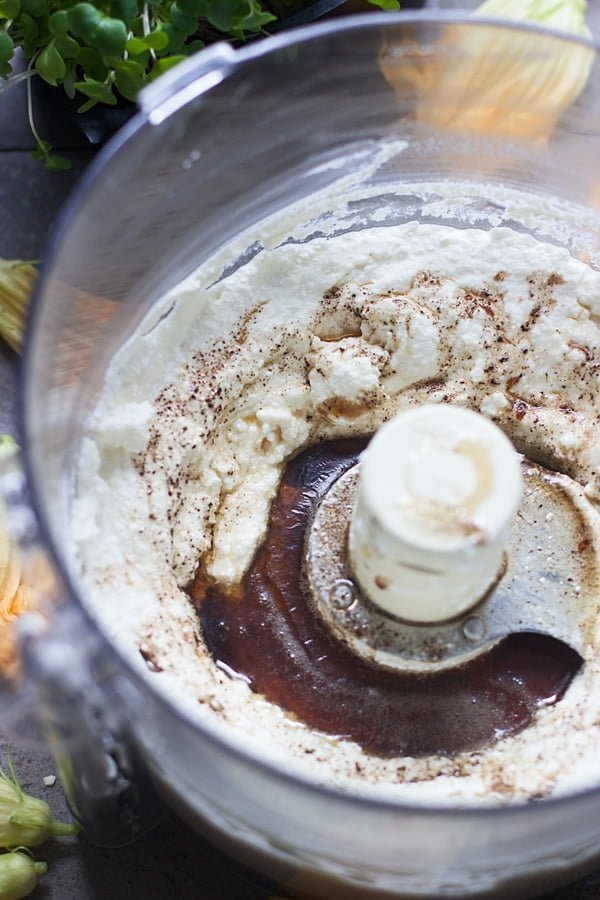 Teddy and I made our first run to the farmer’s market a few days ago, and while I was definitely tempted by all the juicy looking peaches, giant squash, and colorful cherry tomatoes, I settled on a two dollar bunch of zucchini blossoms and the most delicate microgreens I’ve ever seen in person.

After a quick jaunt to two different pizza places for fresh dough – because the first place decided they weren’t selling dough at the moment, due to the enormous influx of children running around the joint –the pizza making began.

I’m going to reiterate this again, this pizza is simple, which I guess is what you want in a pizza, because no one wants to spend hours or too many dollars making homemade pizza. However, did I mention that the ricotta is homemade? The from-scratch factor takes the easy part down just a touch, but it’s still something you can throw together in under an hour. 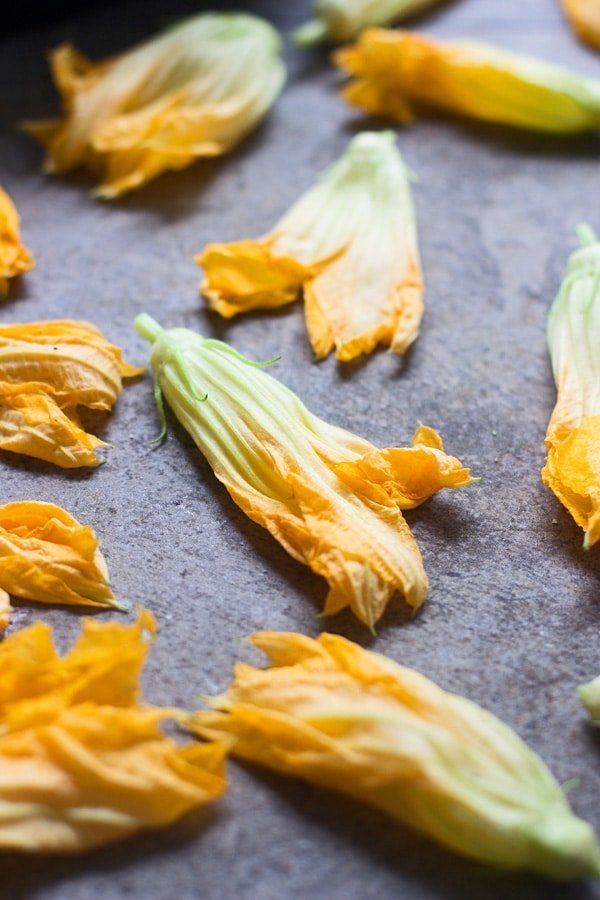 These days, I never buy ricotta, I find that the store-bought stuff is more times than not, geared towards sweet desserts, so it always has this underlying sugary taste that turns me off when using it in savory form. Instead, I just pick up a container of half and half, a half gallon of milk, and make it myself with a little bit of apple cider vinegar. I’ve gone the process a few times here, but rest assured, it’s one of the most fool-proof foods to make I’ve ever encountered.

Once the ricotta is whipped up with a few tablespoons of brown butter and some salt, it gets slathered on a store-bought pizza crust (more points for you if you make your own), sprinkled with grated parmesan cheese, and is then covered in zucchini blossoms.

It gets popped into a 550-degree oven, until the crust is crispy and brown, and when it comes out, it’s covered with even more parmesan, drizzled with a little bit of olive oil, and sprinkled with microgreens.

For a complete summer meal, serve it with sliced farmer’s market tomatoes, a little bit of basil, and some chilled rosé. 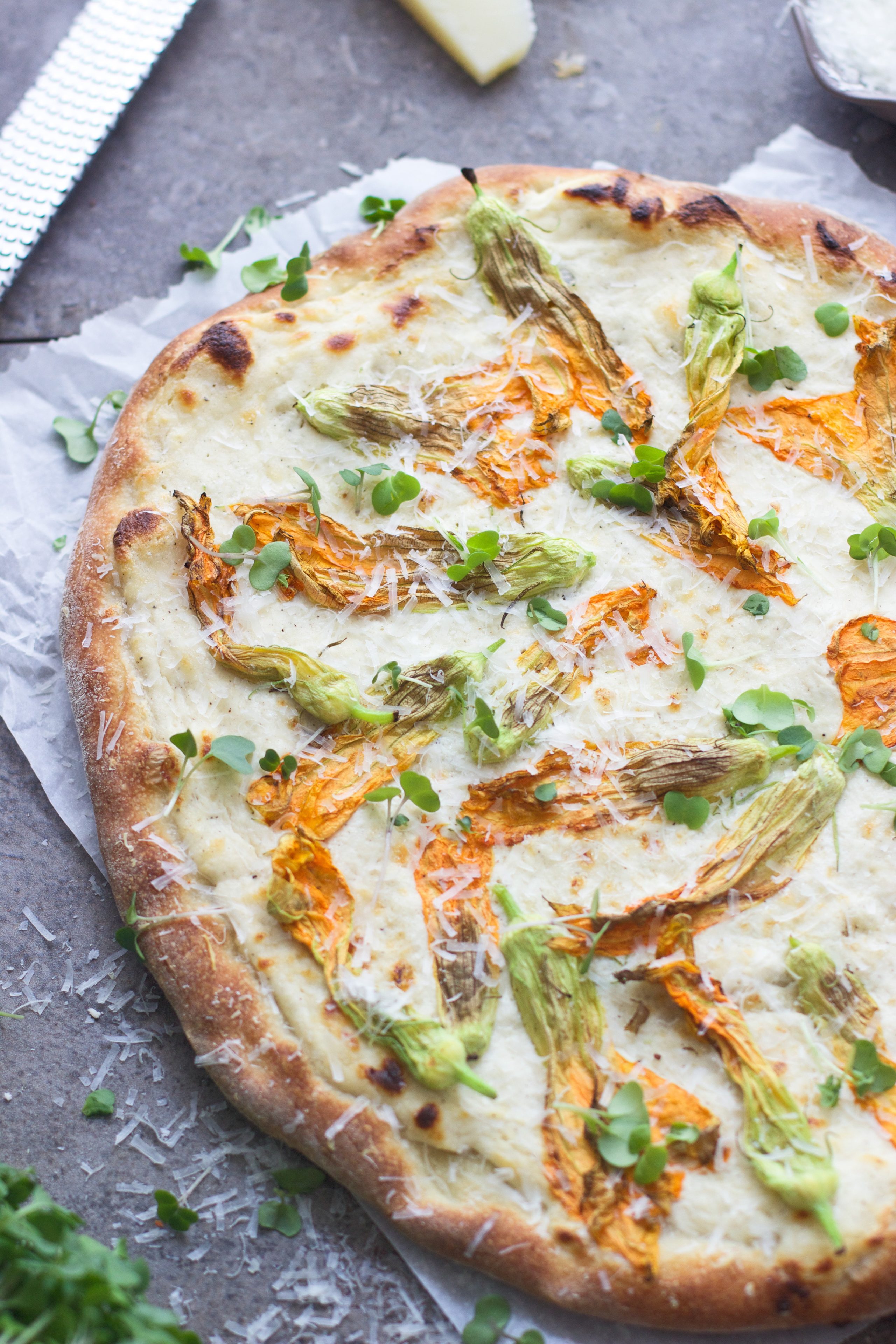