This ultra cheesy, creamy, completely indulgent Potatoes Dauphinoise Recipe is the perfect side for your Thanksgiving table. It’s also perfect served alongside beef, pork or chicken any time of year! We simmer yukon gold potatoes in cream and milk, layer them up in a casserole dish, cover them with nutty gruyere and parmesan cheese, and bake until golden brown and bubbly. They are HEAVENLY. 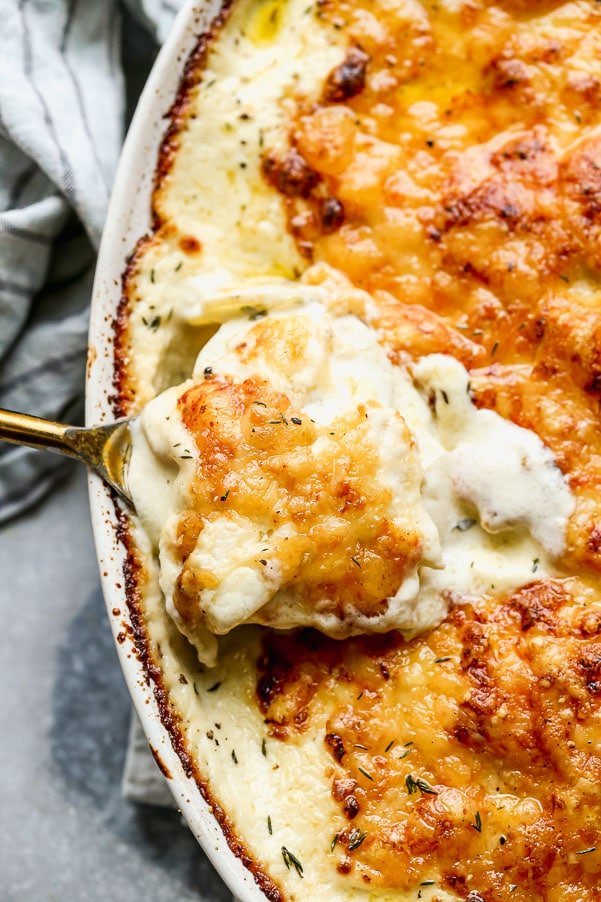 I didn’t think I’d ever find another Thanksgiving potato recipe that would rival our Creamy Dreamy Mashed Potatoes, but our Potatoes Dauphinoise Recipe? This is the one that’s about to give those mashed potatoes a run for their money.

Because when you take buttery Yukon gold potatoes and simmer them in a luxurious mixture of cream and milk, layer them in a casserole dish and practically smother them with nutty gruyere and parmesan cheese until they’re irresistibly golden and cheesy and creamy, well, it doesn’t get much better than that.

What are Potatoes Dauphinoise?

At its simplest, potatoes dauphinoise are thinly sliced potatoes cooked with cream and milk. Essentially it’s the French version of a potato gratin. It’s not typically made with cheese, but hey, we’re here to beak the rules. And why oh why, wouldn’t you want to add cheese?

Let’s get into the details. 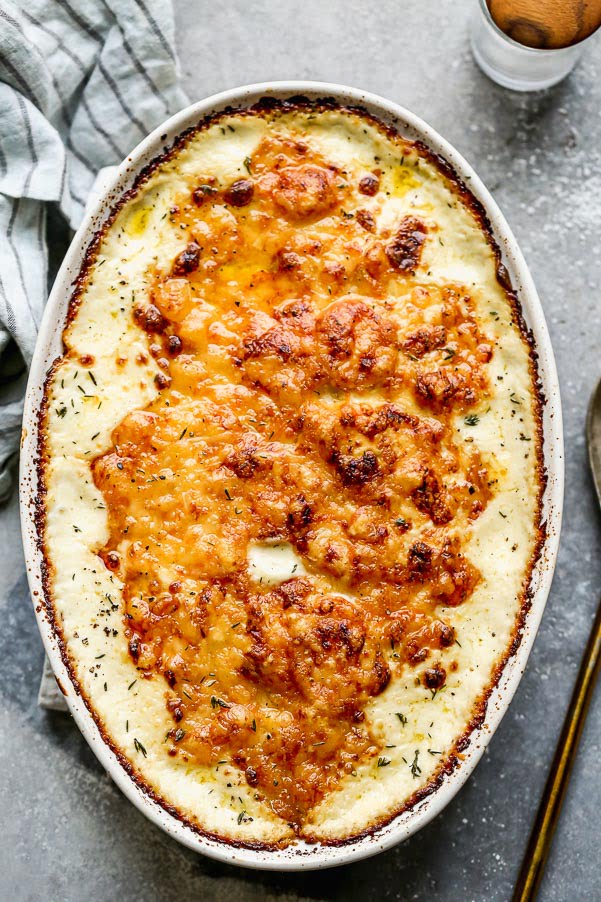 Ingredients in our Potatoes Dauphinoise Recipe

Potatoes. For any potato gratin or potatoes dauphinoise recipe, I recommend Yukon gold potatoes. They’re soft, buttery and so delicious. The skin on a Yukon gold potato is super thin, which means you can leave it on, reducing ample prep time.

Cream + milk. A classic Potatoes Dauphinoise Recipe uses a combination of milk and cream. I’ve used all cream before and it works well. However, I wouldn’t recommend using all milk, as you really need the fat in the cream to create a super luxurious sauce. The combination of the two is what I’ve found to work best.

Cheese. You could use any cheese you want, but I’m partial to a really nutty, aged gruyere. I also like to throw in a little bit of parmesan cheese, but if you only want to pick up one, go with the gruyere. Try to find a good quality gruyere that’s aged a long time and hard versus soft. The harder the gruyere, the nuttier it will be, which translates to major flavor in the final product.

Herbs. While the combination of gruyere, cream and milk is definitely flavorful, I like to infuse some herb notes in as well. My herbs of choice are fresh rosemary and thyme, but any combination of herbs works great.

Garlic. While I don’t love distinguishable pieces of garlic in my potatoes, I do love the flavor, so we grate a few cloves of garlic directly into the cream mixture.

Salt. Like any dish, salt is a really important factor when working with so many blank canvases such as potatoes, cream, and milk. We use a whole teaspoon, but I encourage you to taste the milk and cream and see if it needs any more. Remember, this is seasoning A LOT of potatoes and cream, so we don’t want to be shy. 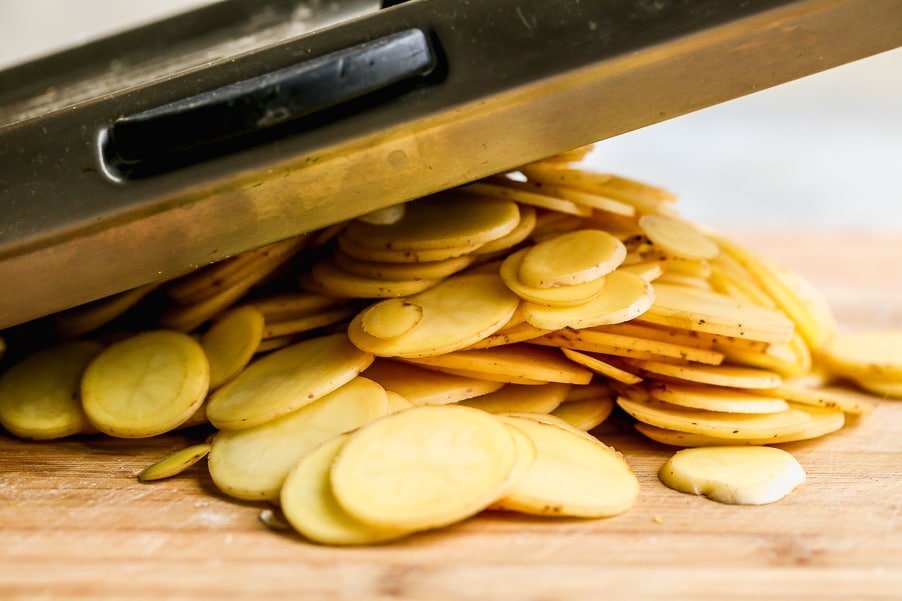 How to make Potatoes Dauphinoise

A really important step in creating the perfect layered potatoes dauphinoise is to evenly cut the potatoes. I do this with a mandolin, which ensures I have perfectly thin even slices of potato. It’s a tool I actually find myself using quite often for things like fennel salad or thinly sliced fruit. I highly recommend having one at your disposal. Most of them fold up and store quite compactly.

If you don’t have a mandolin, you’ll want to use a VERY sharp chef’s knife to cut the potatoes into 1/8-inch slices. It’s okay if they aren’t perfect, you just want to make sure they are very similar in size so they all cook in the same amount of time.

It may seem silly to cook the potatoes before you um, cook the potatoes. However, cooking the potatoes in the cream beforehand is an essential step to the perfect potatoes dauphinoise recipe. Not only does it ensure the cheese doesn’t get too brown before the potatoes are done cooking, but it also helps to transform the sauce into a thick, creamy oblivion, which would take too long in the oven.

It also gives us a chance to adequately flavor the cream and milk with the thyme, rosemary, garlic and salt. If the liquid isn’t seasoned enough, you can add a little bit more salt and pepper and we can dispose of the thick stems on the herbs.

Add the heavy cream, milk, garlic, herbs, and salt to a large pot. Transfer the potatoes to the pot. Bring to a boil and then reduce to a simmer. Simmer for 10 minutes and then remove the stems of the herbs. Set aside. 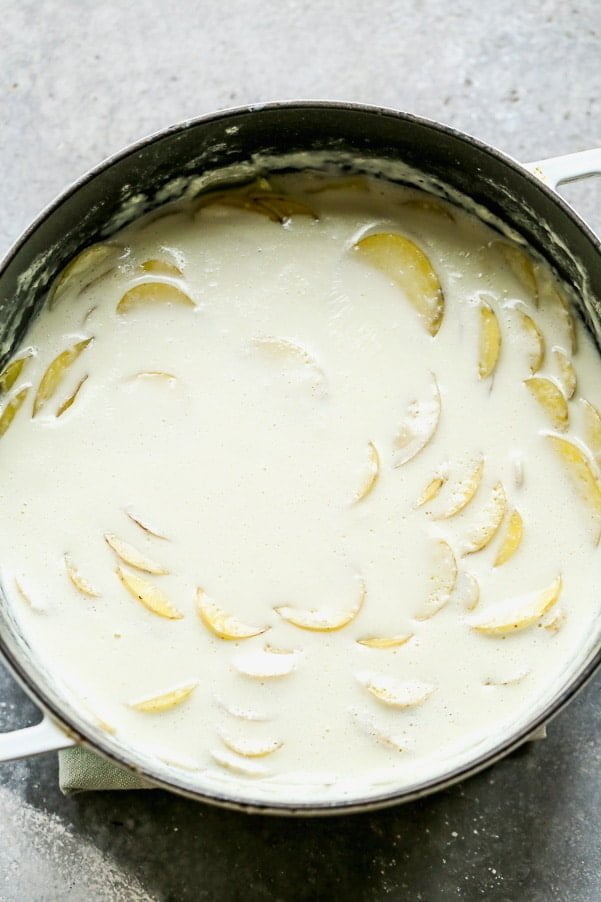 Before I add the rest of the liquid on top of the second layer of potatoes, I like to gently push them down so they are compact. Finally, sprinkle the rest of the cheese one top.

Place the casserole dish on a large sheet pan (covered with foil if you really want to be careful) just in case the liquid boils over. Bake until the the cheese is golden brown and bubbly. The potatoes should be easily pierced with a sharp knife.

It’s crucial to let the potatoes rest after the bake. This helps the sauce to settle and thicken up perfectly. If you dig in to them too fast, it’s likely to become a sloppy mess. Luckily, at Thanksgiving, no dish is every ready at the same time, so you can pull these out while everything else finishes cooking. 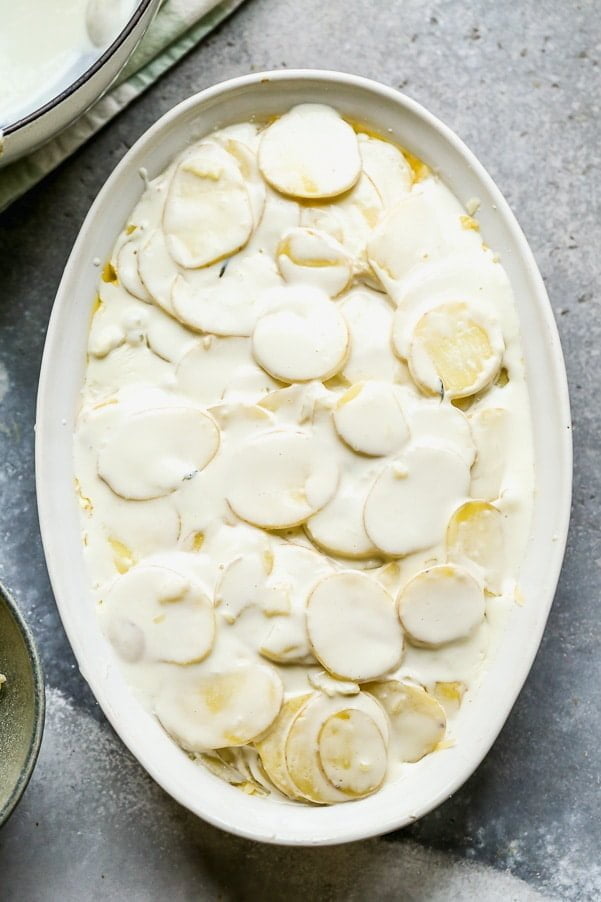 Can you make these ahead of time?

Potatoes Dauphinoise are best served the day of. Because the cream and milk rely on the heating process on the stove AND in the oven, it’s hard to prep them in advance.

If you really want to make them in advance, I would suggest making them from start to finish up to a day in advance. Let them cool completely, cover with foil and keep in the fridge.

When you’re about 30 minutes from eating, pop the potatoes into a 350 degree oven. Let them bake until they are hot all the way through, about 25 minutes. Pull the foil off and let the cheese brown up a little bit more.

You could also make these earlier in the day of your dinner, and let them sit at room temperature for up to three hours. Let them warm up in a 325 degree oven. 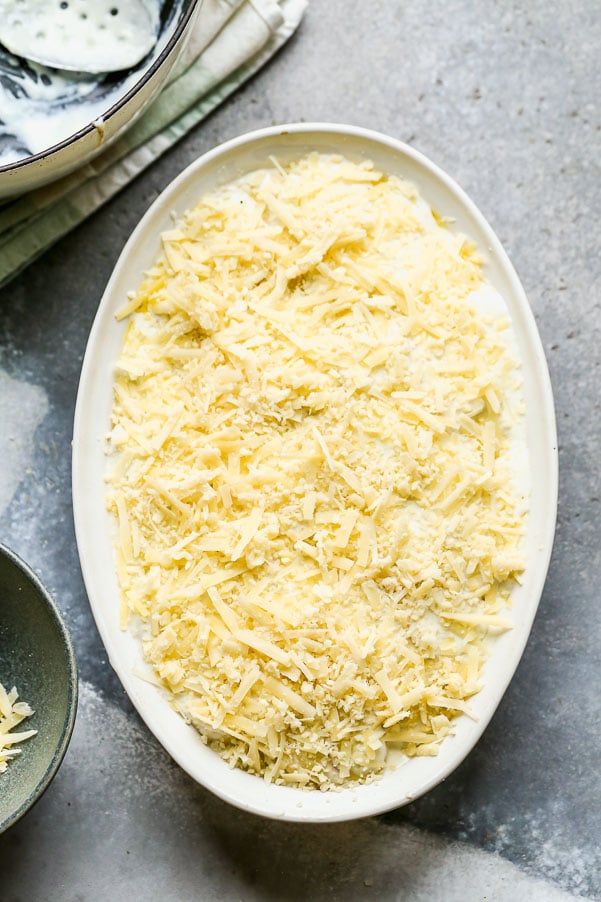 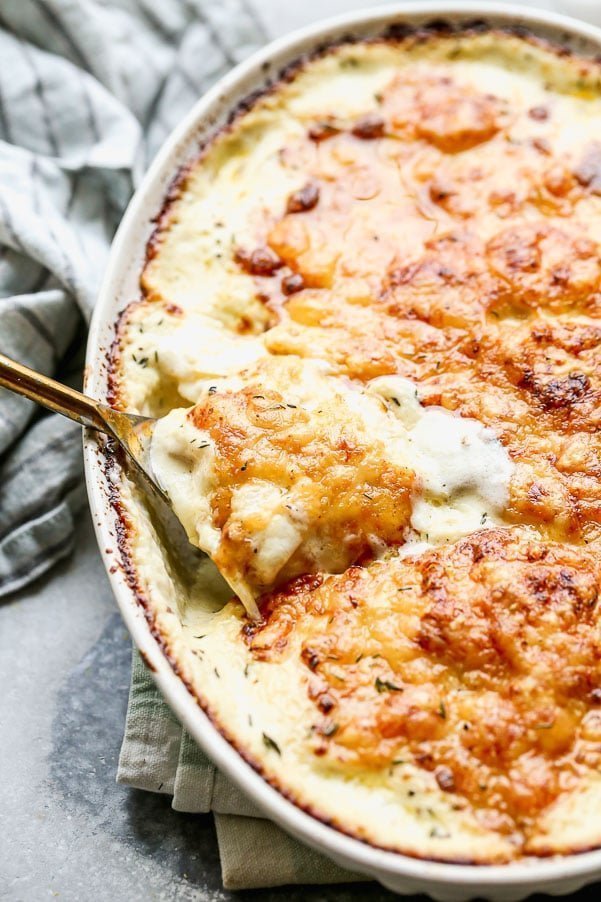 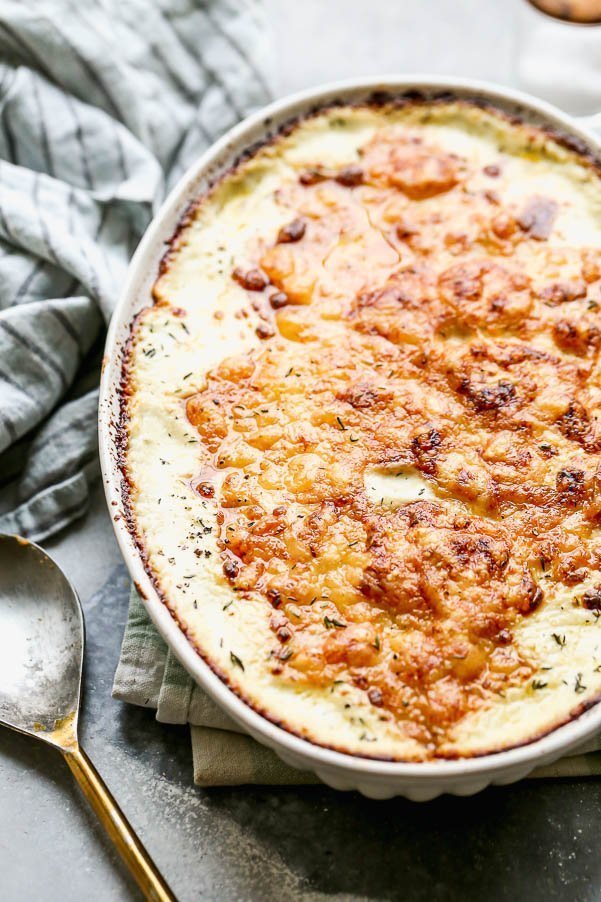 Print Rate Email
This ultra cheesy, creamy, completely indulgent potatoes daupinoise recipe is the perfect side for your Thanksgiving table. It's also perfect served alongside beef, pork or chicken any time of year! We simmer yukon gold potatoes in cream and milk, layer them up in a casserole dish, cover them with nutty gruyere and parmesan cheese, and bake until golden brown and bubbly. They are HEAVENLY.
Prevent your screen from going dark
8 people