This Chicken Gyro Salad with Crispy Pita combines all our favorite components of a classic Greek sandwich and transforms them in to a healthy salad. Every bit as delicious and satisfying as the original! 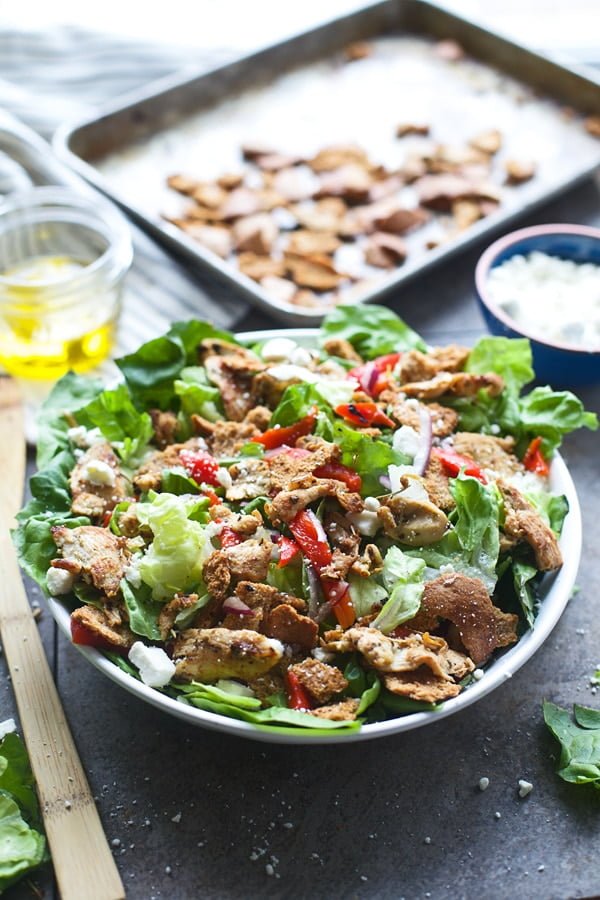 Oh hi! Is it Monday already?? How is it that each week flies by faster than the last? And more importantly, how is it the weekend flies by so quickly, it’s merely a blur of a couple fleeting moments? I hosted a bridal shower yesterday, so the entire day I kept thinking it was Saturday and I had Sunday to recover, and as I sipped on my never-ending mimosa, I suddenly was hit with the epiphany that my weekend was about four hours shy of being a distant memory –reality sucks. 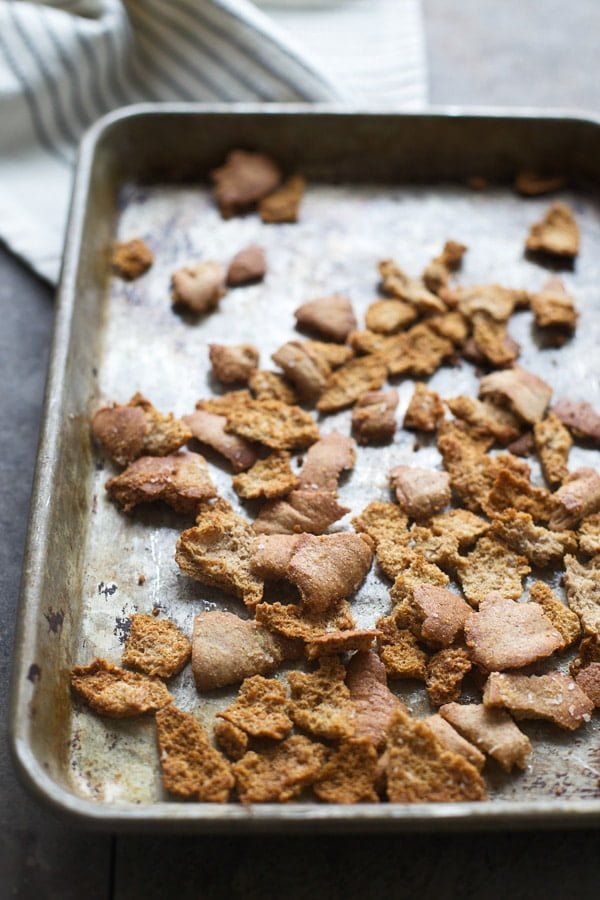 This weekend also marked an obscenely gluttonous two days, because when you make whipped ricotta, too many shortbread cookies and the most delicious pimento cheese and ham biscuit sammies, they must all be tested, multiple times, and at different times of day, to confirm they’re suitable for public consumption. I have no excuse for the pizza, pizza rolls, popcorn, pasta salad, and copious amounts of bread that were also casualties…

The consequence to my excessive eating habits is a life full of smoothies, salads and hard-boiled eggs to fill the week ahead of me. Although, I’d hardly call this Chicken Gyro Salad with Crispy Pita, a consequence, it’s the opposite in fact. 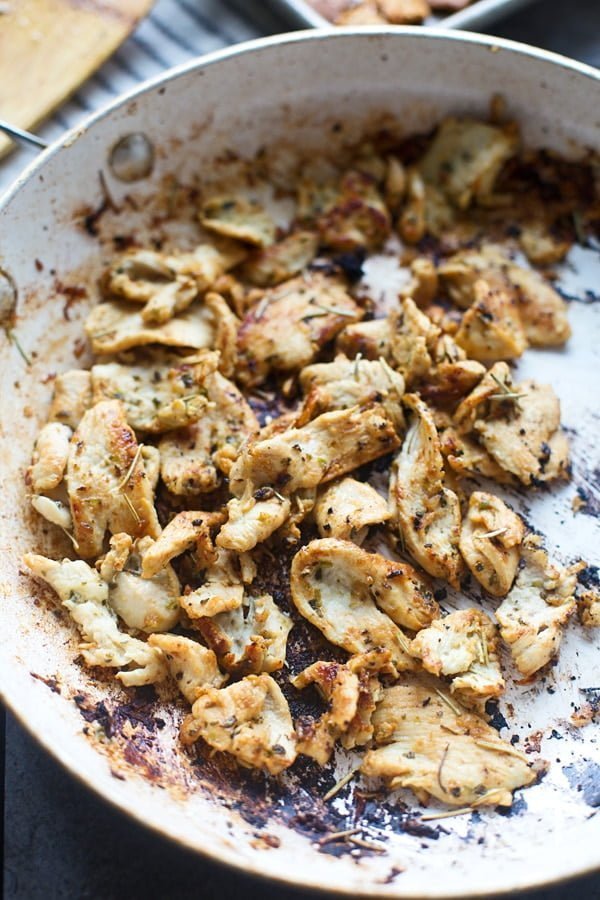 I’ve said it before and I’ll say it again, for me, a salad cannot replace a meal, UNLESS, it’s full of protein and enough accouterments to ensure I get full and stay full well until my next meal (or piece of chocolate) – this checks all of those boxes.

Thinly sliced gyro-seasoned chicken is tossed in an easy Greek-inspired vinaigrette, lots of crispy pita bread, roasted red peppers, red onion and plenty of crumbled feta cheese. It’s a fairly easy salad to throw together, but does take a bit of prep and a light amount of stove and oven time. In short, it’s not something you just chop and throw together, but it’s also not something that’s going to keep you in the kitchen for hours on end.

Also, keep in mind, you aren’t confined to the toppings I listed above, chickpeas, kalamata olives, artichokes and tomatoes would also be perfect additions, but really, the sky is the limit.

The two non-negotiable items? The chicken and the crispy pita. 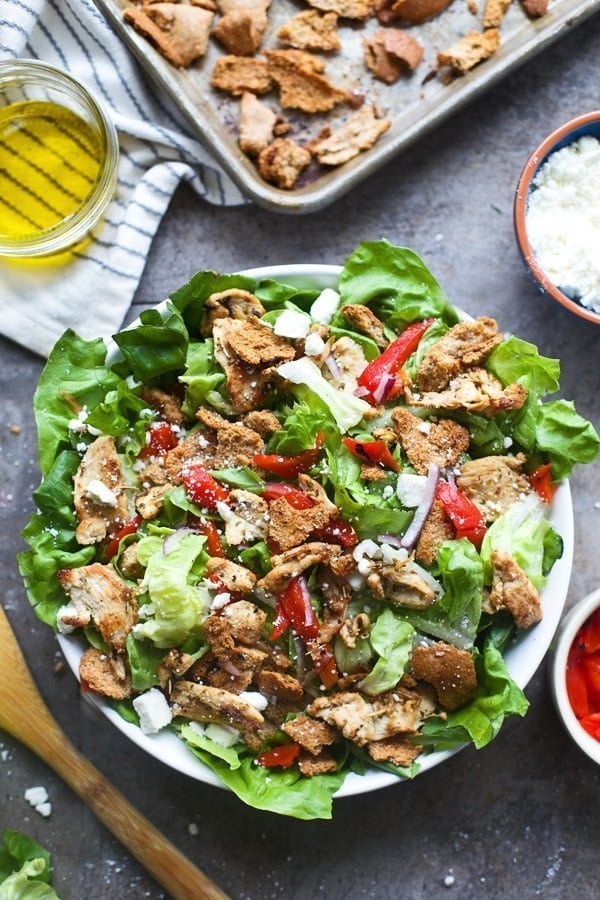 I am slightly obsessed with gyros, I love the way the meat is seasoned, and of course, I love the meat itself, but since it isn’t exactly practical, or healthy to make at home, I just took all of the flavors – rosemary, oregano, garlic and onion – tossed them with some thinly sliced chicken, lemon juice and olive oil, marinated them for a few hours, and then threw them in a screaming hot pan until they were golden brown and almost crispy.

While the chicken marinates, some torn pieces of pita bread are seasoned, toasted in the oven until crisp and then everything is ready to be assembled.

I like to dress the leaves first, season and then add the remaining ingredients so the pita and the chicken don’t get too saturated in the dressing. Once everything is tossed together, it gets dusted with feta cheese and it’s ready for the table. 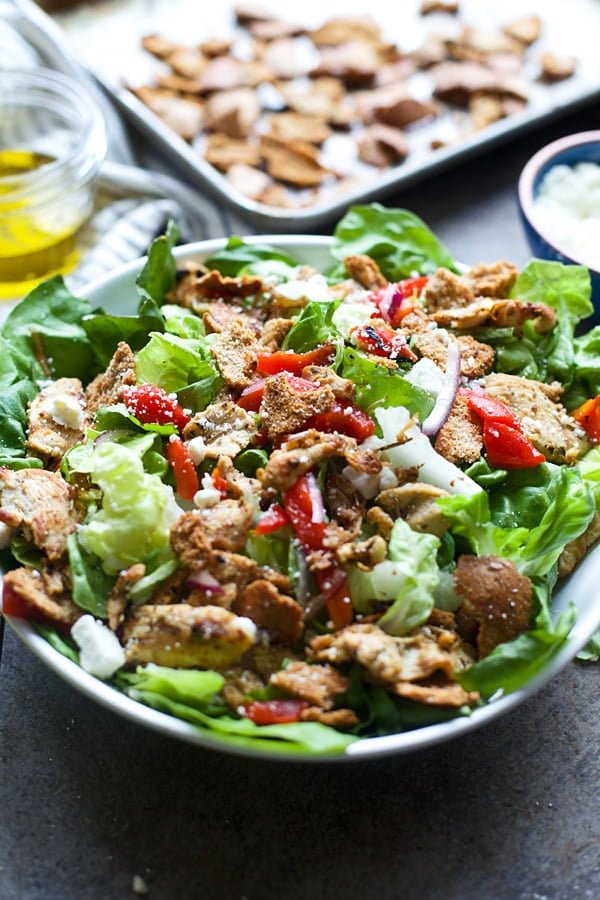 5.0 from 1 reviews
Chicken Gyro Salad with Crispy Pita
Print
Prep time
1 hour
Cook time
30 mins
Total time
1 hour 30 mins
Author: Nicole ~ Cooking for Keeps
Serves: Serves 4
Ingredients
Dressing
Instructions
For the dressing: Add all ingredients into a mason jar. Tightly secure the lid and shake until combined.
Notes
*Put the whole chicken breast in the freezer, until it firms up, but is not frozen, about 10-15 minutes. This will help you cut it super thinly!
3.3.3077