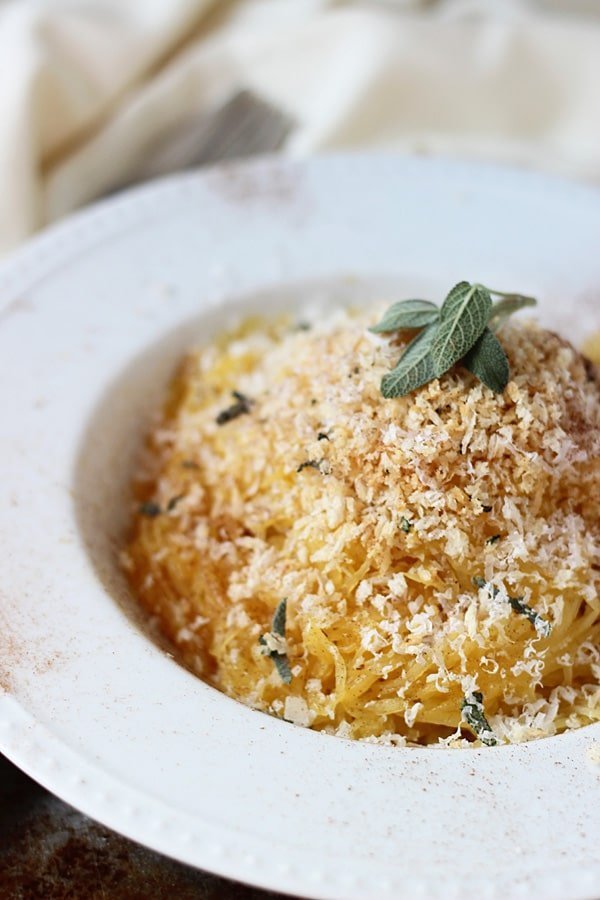 Ok. Let me preface this post with this: In no way, shape or form am I suggesting you replace pasta with spaghetti squash, zucchini or any other kind of vegetable masked as noodles on a regular basis. I happen to love veggies, so it doesn’t irk me out to replace pasta with a veggie every once in a while, you know when I’m feeling a little…um… over served on the carbs. Because believe you me, I can’t live in a world without fettuccine and rigatoni and papparadelle and ravioli and tortelloni and and and….. I just can’t.

BUT with that said, when I do cut back on the pasta and bread a little bit, I can see an almost immediate shift in my weight, it’s the number one way I lose weight for any upcoming event. Since I have a beach vacation coming up pretty quickly, I’m trying to swap out bread and pasta once or twice a week with something a little healthier – so so hard to do this time of year. 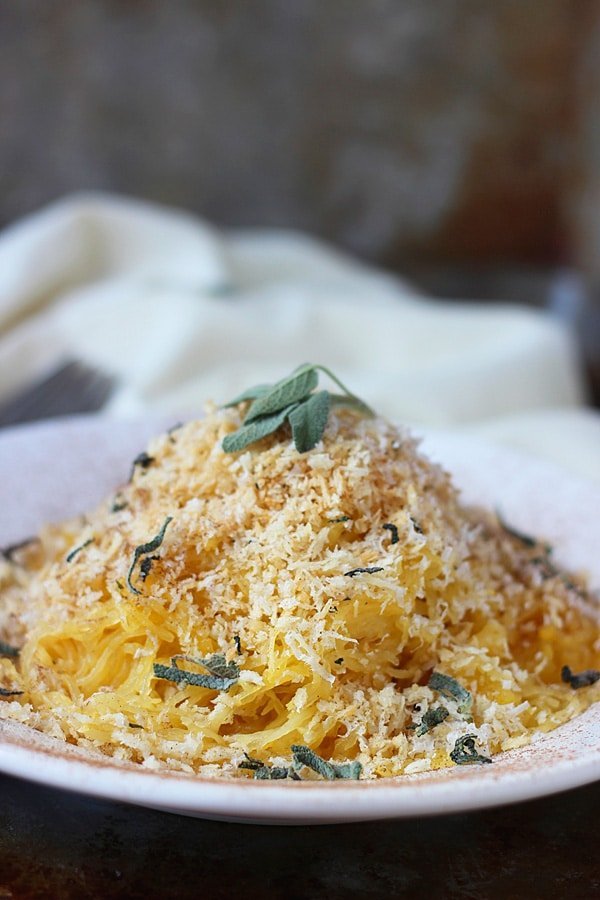 Enter: Spaghetti Squash. I always subtly rolled my eyes and muttered under my breath when I’d hear people rave about spaghetti squash and exclaim, “You can’t even tell the difference between it and pasta!”

Totally wasn’t sold, and I’m still not sold on the fact that it tastes identical to pasta. It doesn’t. But it is absolutely delicious, fills me up, and does, in fact, slightly curb my craving for the less healthy stuff.

I think it’s safe to say, I think I’m totally into it. 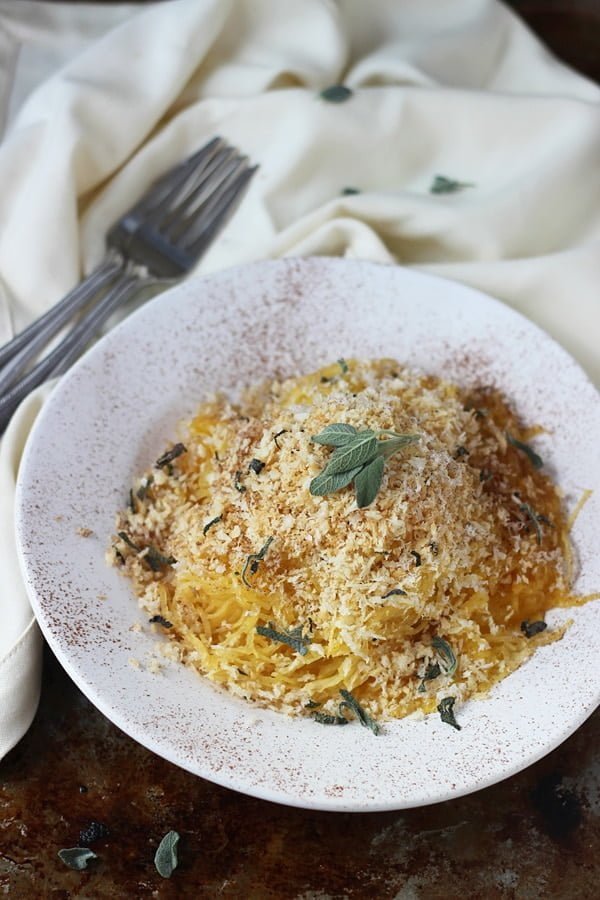 When I made this Crispy Chicken with Cinnamon Pumpkin Cream Sauce, I totally fell in love with the savory play on two normally sweet ingredients. I had big plans to turn the sauce into a pasta dish, but when I saw spaghetti squash on sale at the store, and simultaneously had flashes of bursting out of my bikini and tank tops on vacation, I decided to see if I could make the sauce work in a more healthy, beach ready, spaghetti squash “pasta.” 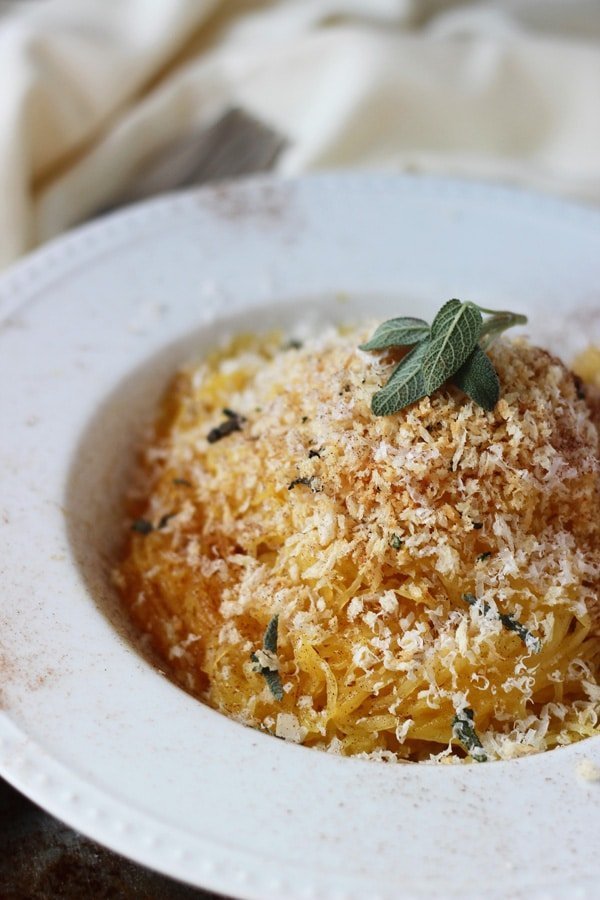 Instead of using a full on cream sauce, I decided to go with a carbonara style sauce made with egg yolks, half and half to lighten it up even more, and of course, a big handful or two of freshly grated parmesan cheese.

Spaghetti squash is already slightly sweet, so the cinnamon and pumpkin compliment it fantastically with a barely there sweet undertone. If you’re not into the spaghetti squash you can of course, swap it out with regular pasta, which is what I did for Kev. The taste isn’t exactly the same (obviously), it’s a little more savory, but still ridiculously delicious. 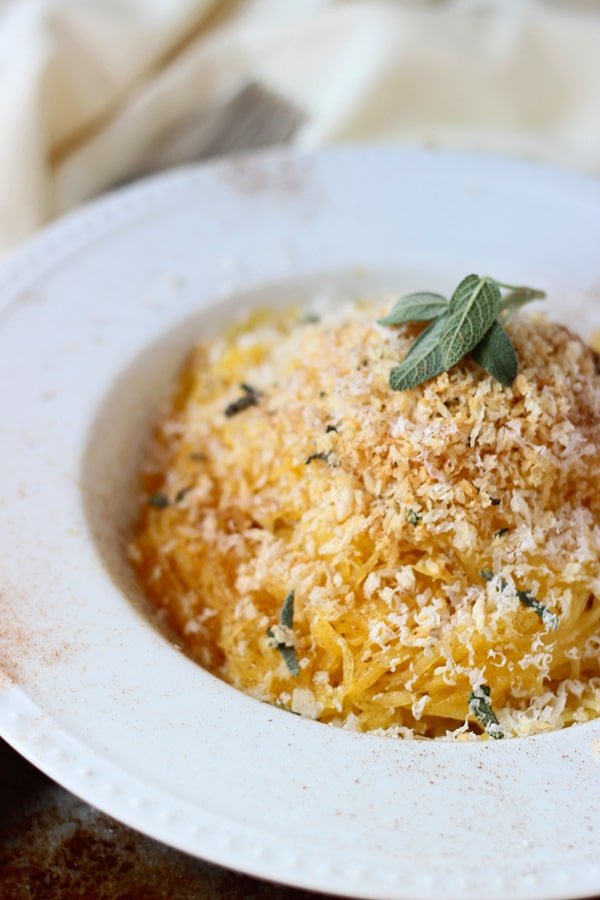 Who knew this pasta obsessed girl could get on board with spaghetti squash as a legitimate meal?? Certainly not me.