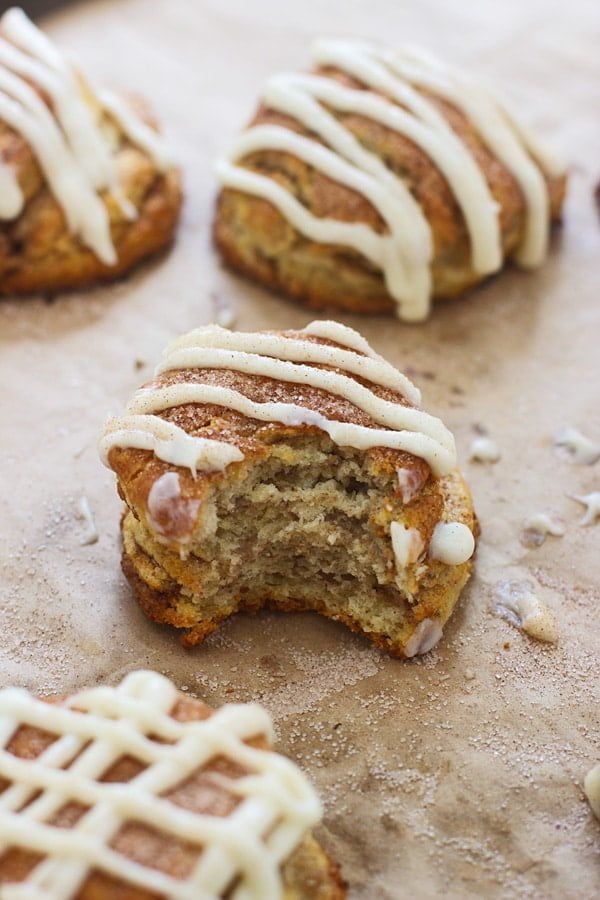 I cook and bake a lot. Obviously, my job title is pretty implicit of that fact, so you can imagine the sheer quantity of delicious (and sometimes not-so-delicious) items that come out of my kitchen from day to day. And while I have a special place in my heart for all of the recipes I create, sometimes I make something that kind of knocks my socks off. Something I can’t believe I thought of, and that actually turned out pretty phenomenally and didn’t end in complete and utter failure – which sometimes happens. 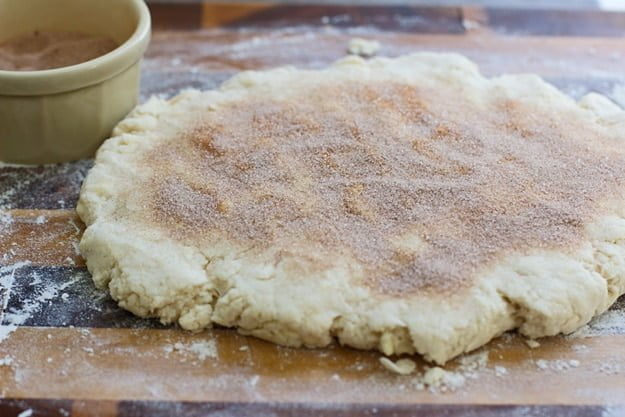 These cinnamon roll biscuits are just that.

I dreamed these guys up a few weeks back when I had a full weeks worth of recipes on my to-do list to cook and photograph, and while usually I’d just jot the idea down in my recipe notebook and come back to it at a later date, something told me to push all the other recipes aside and get to this one STAT, and I’m so glad I did. 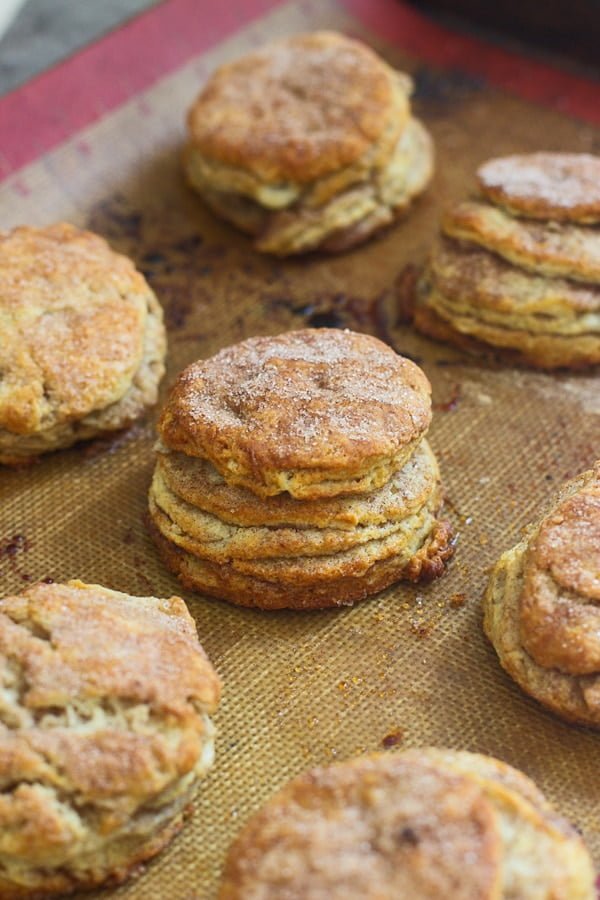 Usually I can pinpoint what the inspiration behind a certain recipe is, but these are the one instance where the idea literally materialized out of nowhere. Although I will say, I’ve made it somewhat of a mission to come up with as many biscuit preparations as possible, because they are, after all, one of my favorite ways to consume carbs (besides pasta), and one of the easiest baked breads to throw together – perfect for someone like myself that doesn’t consider themselves to be an “expert” baker – so my mind is always churning with some sort of new biscuit idea.

In my head I wanted these biscuits to have all of the flavors of a classic cinnamon roll, but still retain that flaky, buttery, crispy-on-the-outside-soft-on-the-inside composition of the perfect biscuit. I started with what I believe is the perfect biscuit dough – a mixture of flour, baking powder, salt and baking soda and a 5 to 3 ratio of butter to shortening. I know that an all-butter dough is typically the way most people prefer their biscuits, but I find that the addition of vegetable shortening adds a sort of flakiness and lightness to the biscuits you can’t get with all butter. 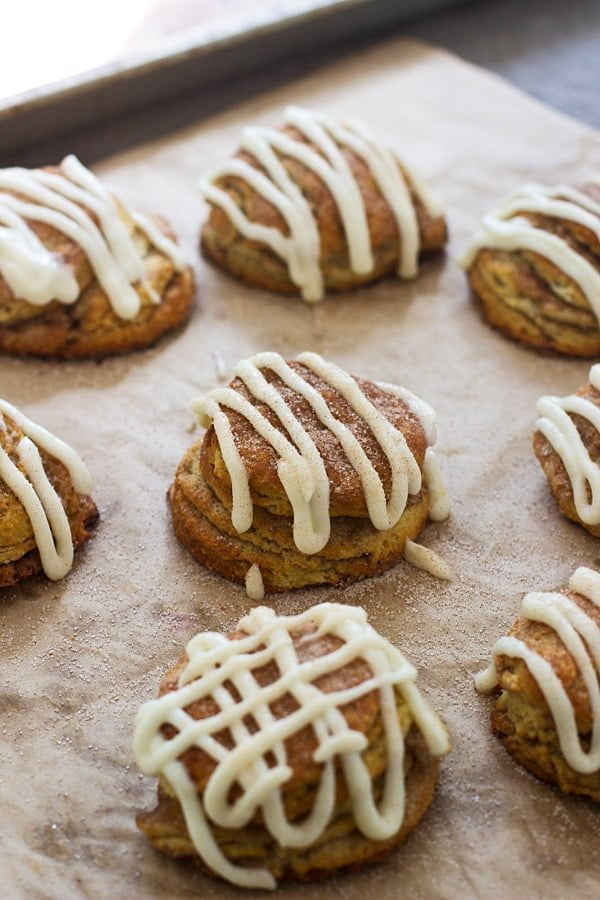 You can do everything by hand, and most times I do, but here, I really wanted to make sure that the butter stayed super cold, so I let the food processor do most of the work for me. If you find the food processor is a huge hassle, you can definitely go the classic preparation method and just use a fork or pastry cutter to blend the butter and shortening in with the flour mixture.

This process not only ensures tall, flaky biscuits, but it also laces each layer with the perfect amount of cinnamon and sugar essence. 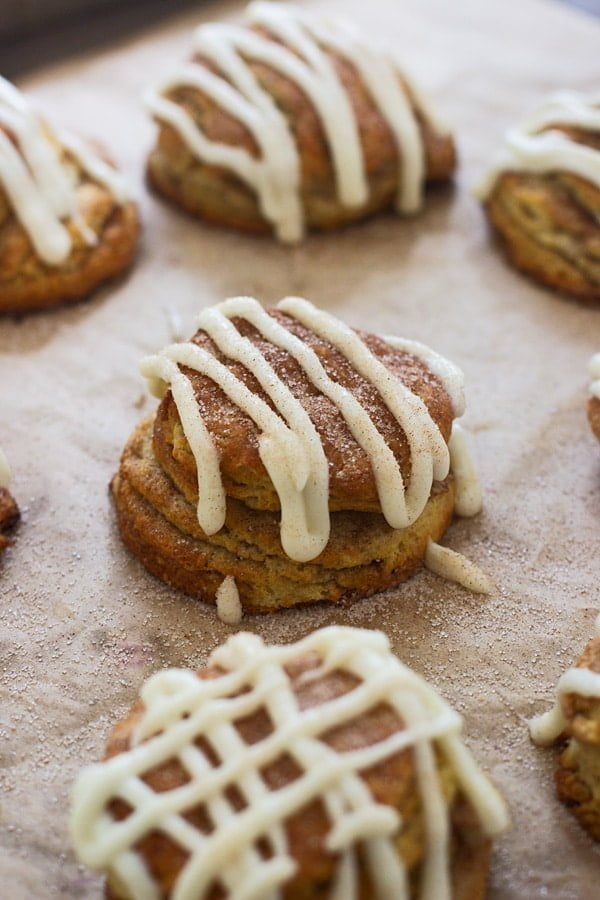 Now, during the cooking process, the biscuits layers might slide around a little bit, but fear not, it’s perfectly fine if they do, plus I think it adds a sort of rustic quality to the biscuits. Once they’re out of the oven, they’re either drizzled artfully in the cream cheese icing, or, copiously slathered with it – either way, these guys taste exactly as I wanted — a cinnamon roll turned biscuit…. 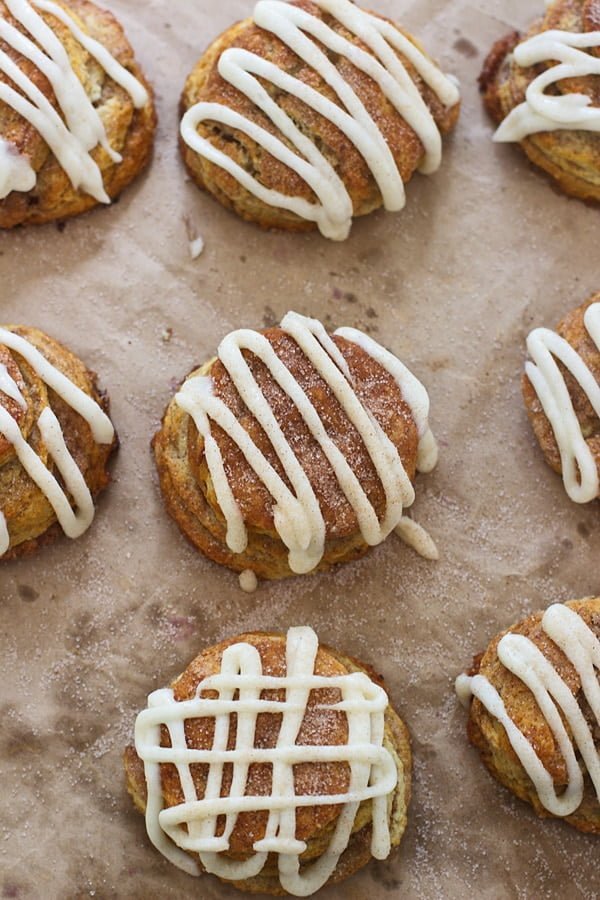 A quick note. These are best served either immediately out of the oven, or a few hours (at most) later at room temperature. They do not store well, so make sure there are enough people around to consume these pretty shortly after baking, otherwise, you might have to eat them all yourself before they become less than perfect…

Although, that might not be the worst thing in the world….