END_OF_DOCUMENT_TOKEN_TO_BE_REPLACED

Creamy Beef and Hatch Chile Enchiladas are probably my favorite enchilada recipe on the planet. We combine flavorful ground beef with roasted hatch Chile peppers, and pepper jack cheese, then wrap it up in flour tortillas, smother them in a spicy hatch pepper cream sauce, more cheese, and then bake. Heaven on this earth! 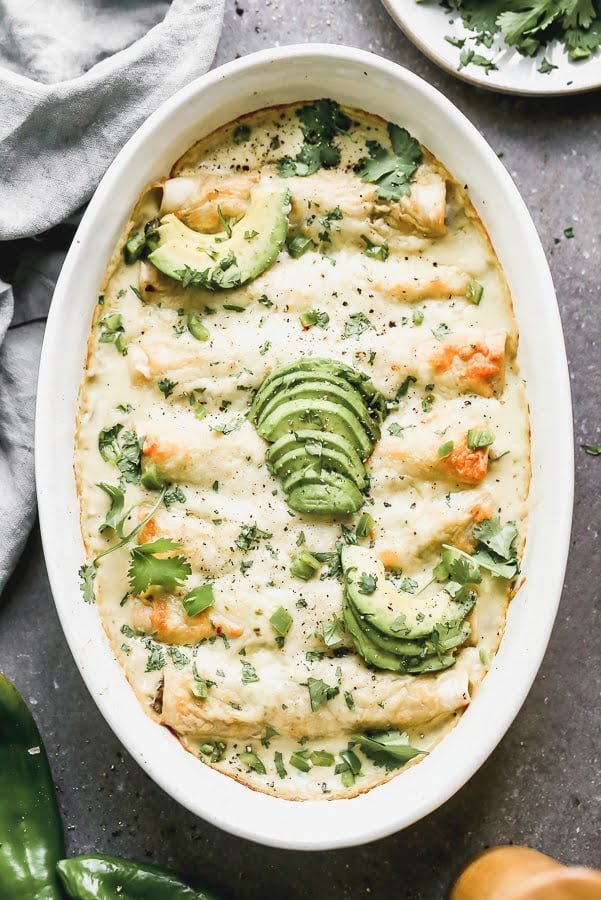 Most of the time, I like to think I’m a good wife. I try not to control, encourage him to hang out with his friends, attempt to understand when he’s speaking accountant language, and most nights, I have a decent dinner on the table when he gets home.

But, like any person, sometimes, I’m not so great. I’m horrible at laundry (Thanks for picking up the slack dear.), the kitchen looks like an animal ransacked the place come 5pm (#foodbloggerproblems), oftentimes the messy, unorganized girl in me wins and there are shoes and mail strewn about. I’m stubborn, rarely admit fault, and occasionally, dinner doesn’t get on the table.

However, no matter what happens, good wife wins when Creamy Beef and Hatch Chile Enchiladas are on the dinner table.

I feel like I say this every single time I come up with a new recipe for enchiladas, but these Hatch Chile Enchiladas…..are they best enchiladas I’ve ever made. (Although it is VERY hard to compete with our Classic Chicken Enchiladas and our ridiculously delicious Shredded Beef Enchiladas with Ancho Sauce.) 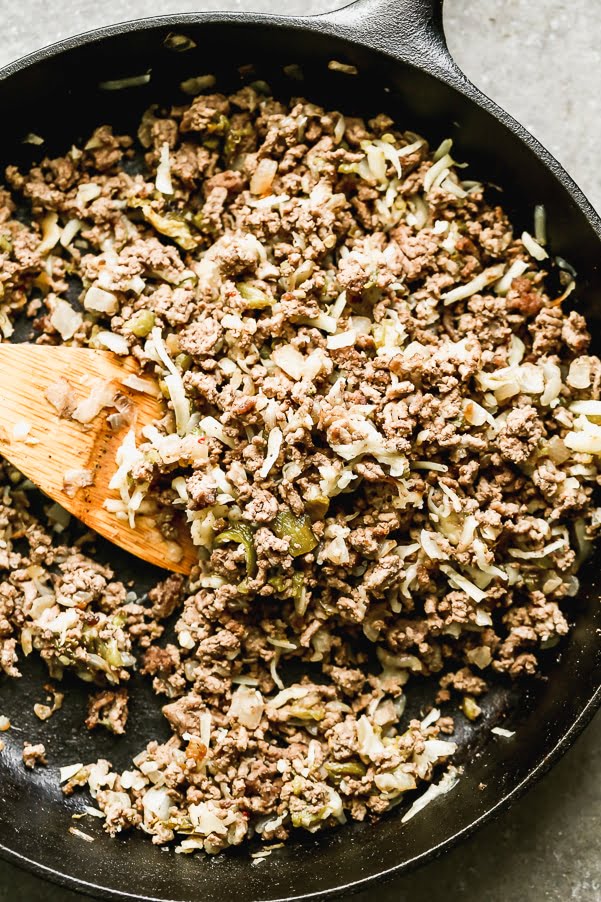 Both the sauce and the filling are pretty simple their ingredient lists, but I promise, they are quite complex in flavor.

We roast the hatch peppers and them pulverize them with some chicken stock. That smoky, spicy broth gets turned into a creamy sauce with a little bit of butter, flour and sour cream – that’s it.

Typically when making a sour cream sauce for enchiladas, I’ll forgo the full-fat sour cream and go with Greek yogurt, but on this particular day, I was really craving something rich, so I ultimately decided to go the full-fat route, and goodness gracious, am I glad I did. I literally licked every single morsel off the bottom of the pan and spoon after assembly, so hopefully that admission of guilt might give you a little bit of an indication of how ridiculously good the sauce is – simple, but ridiculous.

The filling mimics the same vibe with only lean ground beef, onion, garlic, chopped, roasted hatch peppers and a cup or so of shredded peper jack cheese making up the cast of characters.

While you’d think the sour cream and beef would make these guys overly heavy, they’re actually surprisingly light, allowing you to easily shovel at least two into your stomach.

What is a hatch Chile?

There are a lot of chile peppers out there, so it can be kind of confusing to decipher the difference between them all. A Hatch Chile is a seasonal Chile typically only available in mid to late summer. It’s bright green (a little bit lighter than a jalapeño) and long, tapering off at the end to form a point.

They’re actually named for the region they’re grown in – the Hatch region of New Mexico. They’re VERY similar to an Anaheim Chile, but typically a little bit more spicy, which we love. A lot of times, you’ll find one batch of mild or hot, but sometimes you can find a mild version and hotter version at the same store, so it’s really important to taste them before making any recipe.

Like a lot of other chiles out there, they will turn from bright, almost lime green to a reddish color. A general rule of thumb is when the Chile starts to turn reddish, it’s HOT, so be careful.

When roasted, hatch chiles have a wonderful spice to them, but also a slight smoky sweetness we love. 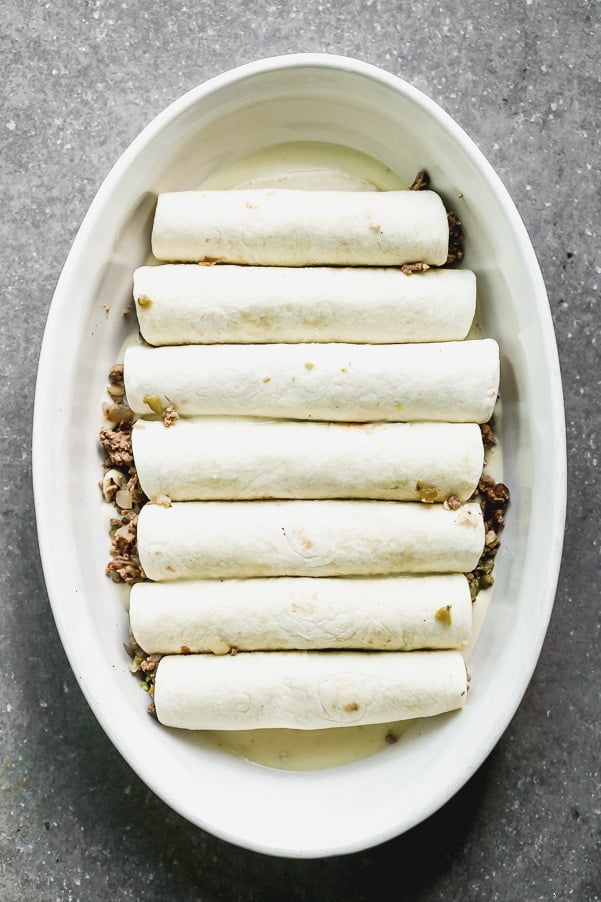 Hatch chiles. For the whole recipe, we’re going too take the raw chiles and roast them (more on that later). For the filling, we chop up the peppers to distribute them throughout the beef filling.

Ground beef. I like to use a lean ground beef here. If I’m not making burgers or meatloaf where the beef really needs to stand on its own, it’s really not necessary to use a full-fat ground beef.

Onion + garlic. Because isn’t that the base of all great tex-mex dishes?

Cheese. We like to reinforce the spice factor in our hatch Chile enchiladas with pepper jack cheese, but Monterrey jack will also work great. If you’re trying to watch calories and fat, mozzarella will also work.

Butter + flour. Butter and flour are classic ingredients for a roux, which is what we use to thicken our hatch Chile sauce.

Hatch chiles. Because these enchiladas are all about the hatch Chile, we also use the chiles in the sauce.

Sour cream. Sour cream is such a great way to add creaminess to sauces while also adding a nice tanginess to the dish – something that compliments the smoky hatch chiles really well. 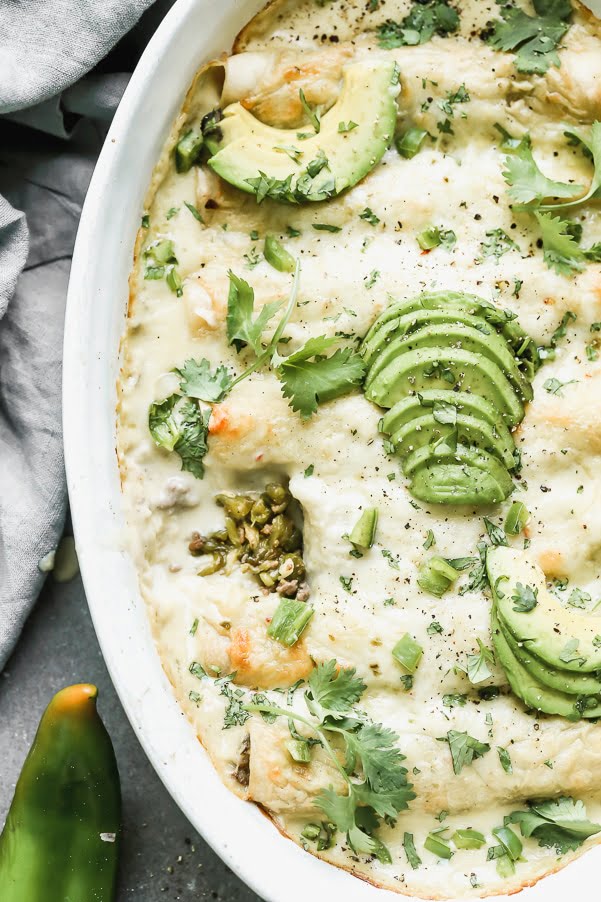 Put them in a plastic bag or a bowl covered with plastic wrap. Let them steam. Peel and take out all the seeds and stems. Chop.

Make the filling. Add the beef, onion, and garlic to a large skillet. Saute until the meat is brown and the onions are soft. Add a little bit of salt and some of the hatch peppers. Stir everything together, remove from the heat, and mix in a little bit of pepper jack cheese.

Make the sauce. Add some of the peppers and about half of the chicken stock to a blender. Blend until smooth.

Now, make a roux. Melt the butter in a medium sauce pan and whisk in the flour. Remove from the heat and slowly whisk in the chicken stock. Next, the chicken + the peppers. Bring to a boil and simmer until thickened. Stir in the sour cream. Season to taste. Done!

Roll! Place a little bit of the filling, about 1/4 cup on to tortillas. Roll and place seam side-down in the pan. Pour the sauce over the enchiladas and bake. 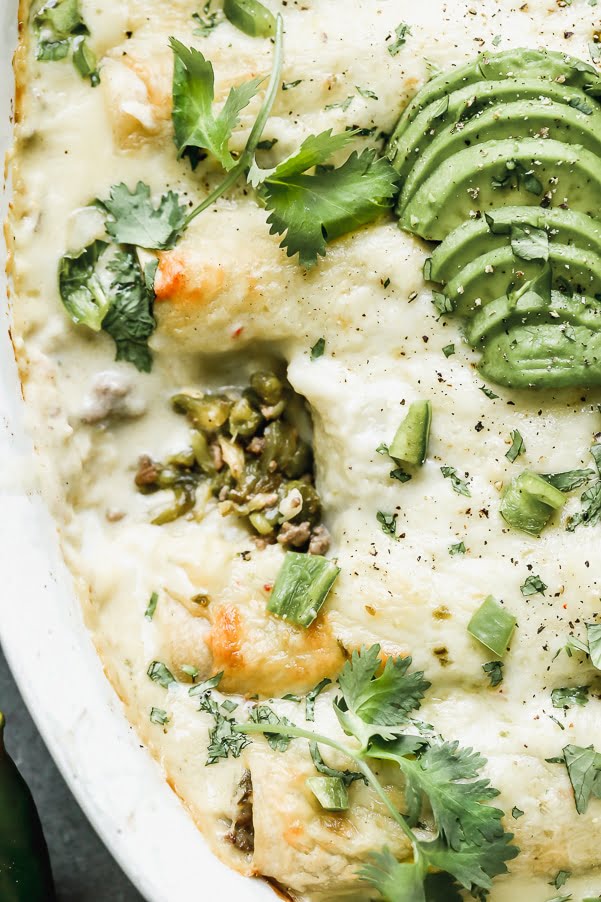 Print Rate Text Email
Creamy Beef and Hatch Chile Enchiladas are probably my favorite enchilada recipe on the planet. We combine flavorful ground beef with roasted hatch Chile peppers, and pepper jack cheese and then wrap it up in flour tortillas, smother them in a spicy hatch pepper cream sauce, more cheese, and then bake. Heaven on this earth!
Prevent your screen from going dark
8 enchiladas