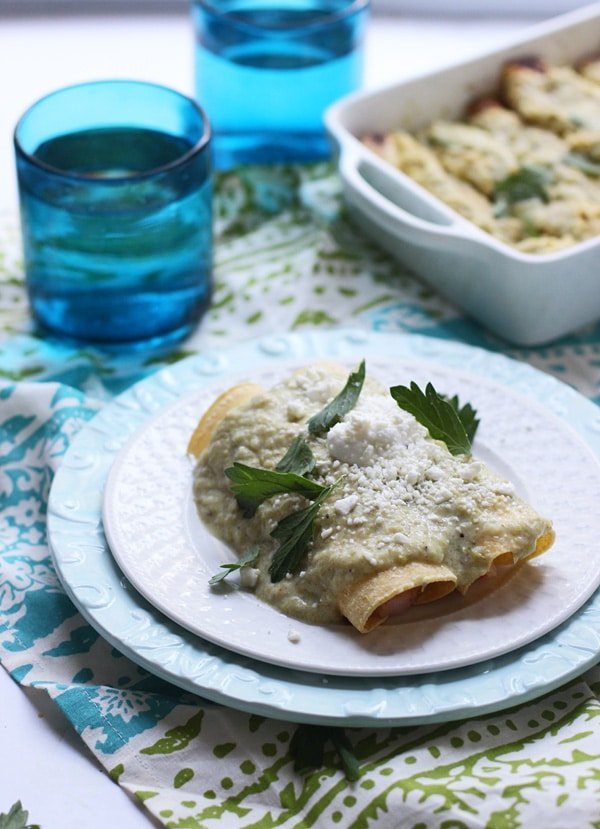 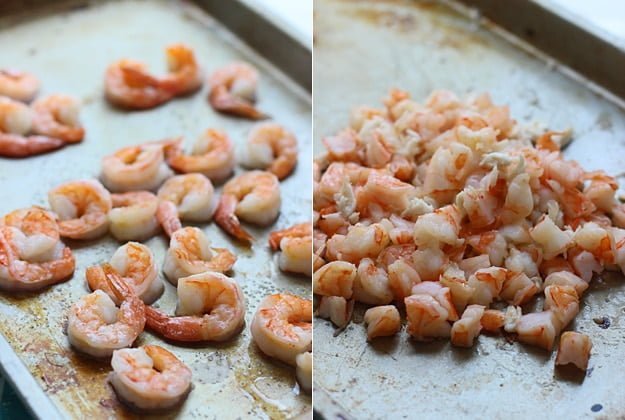 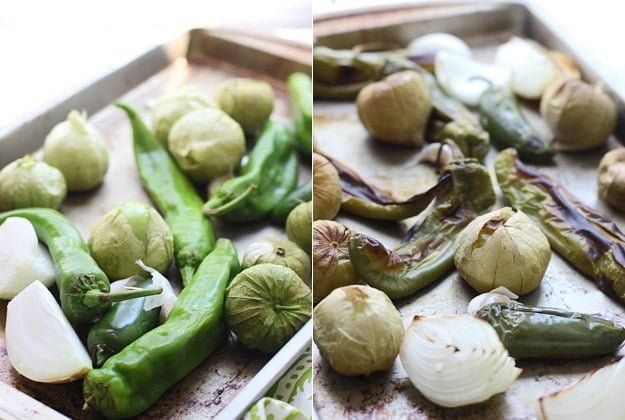 But first, can we talk about my crazzyyyy baby fever? I feel like everyone on the face of the planet, has a baby, is expecting a baby or trying to have a baby. And I love babies. I’ve always known I want to be a Mom at some point, but ever since I got married a little over a year ago, I have a one-track mind to all things baby. I casually peruse Pottery Barn Kids online while my husband is sleeping. I’ll “accidently” walk through the baby section at Target. Linger on my friends’ registries a little longer than usual. Read through the boards on Baby Center. And worst of all, I have a secret Pinterest board on all things baby.

BUT, just because I have baby fever doesn’t mean I’m actually having a baby, we’re still waiting a while longer on that one; so for now, I need things like vacations, happy hours and foods like these enchiladas to keep me distracted. 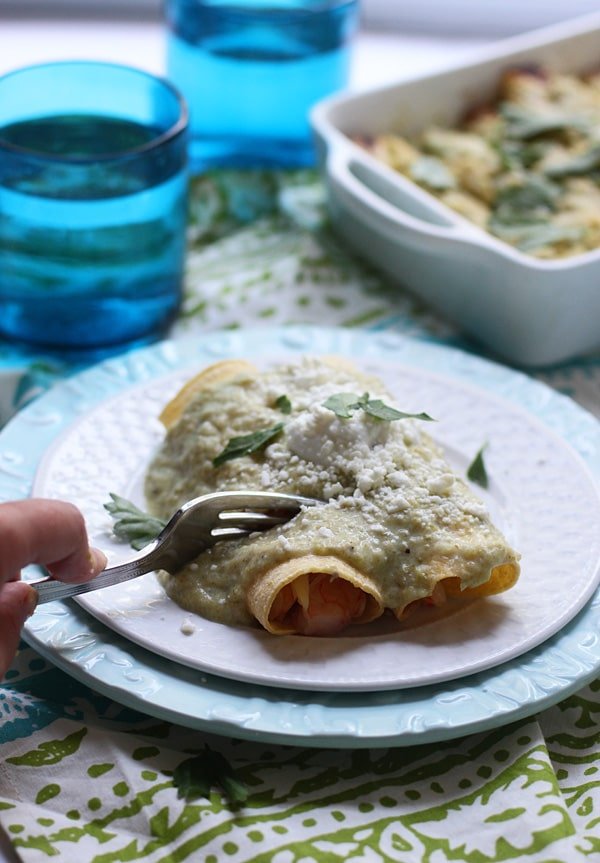 Of course you all know by now, that my love for enchiladas is mountain-high and river-wide – I could never get sick of them. And now that hatch pepper season is underway, what better way to showcase those skinny little chilies than in a giant batch of enchiladas? (Well if I’m technically speaking, it was a small batch.)

This is probably one of the simplest enchilada recipes I’ve made to date; every single component of the enchilada (besides the tortillas) is roasted under the broiler making for a super easy and mess-free preparation. The roasting is done in two batches, the first, a handful of hatch peppers, some jalapeno, onion, garlic and tomatillos; the second, a pound of shrimp tossed with a little bit of olive oil and salt.

Once the peppers are slightly charred, I take the skin off, throw them into the food processor, along with a little bit of Greek yogurt and salt, pulse away, and the sauce is done. When the shrimp come out of the oven, they’re cut into bite-sized pieces and tossed with jumbo lumbo crab meat and just a touch of salt – sauce done. 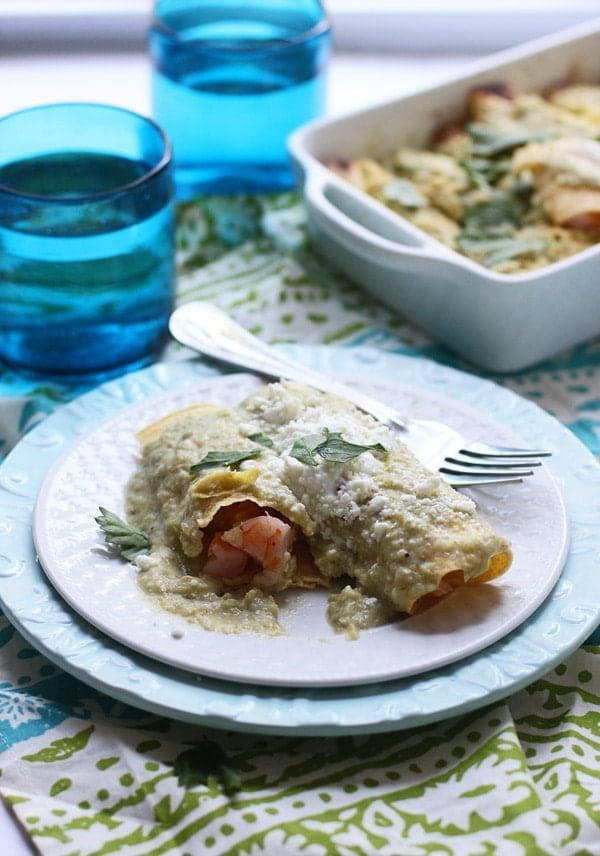 Told you this was simple.

The filling is tucked into pliable corn tortillas, put into a baking dish, covered in sauce and popped under the broiler just until everything is heated through and the tortillas begin to blister.

I like to serve the enchiladas with extra greek yogurt, some cilantro and a little bit of queso fresco (or feta cheese). 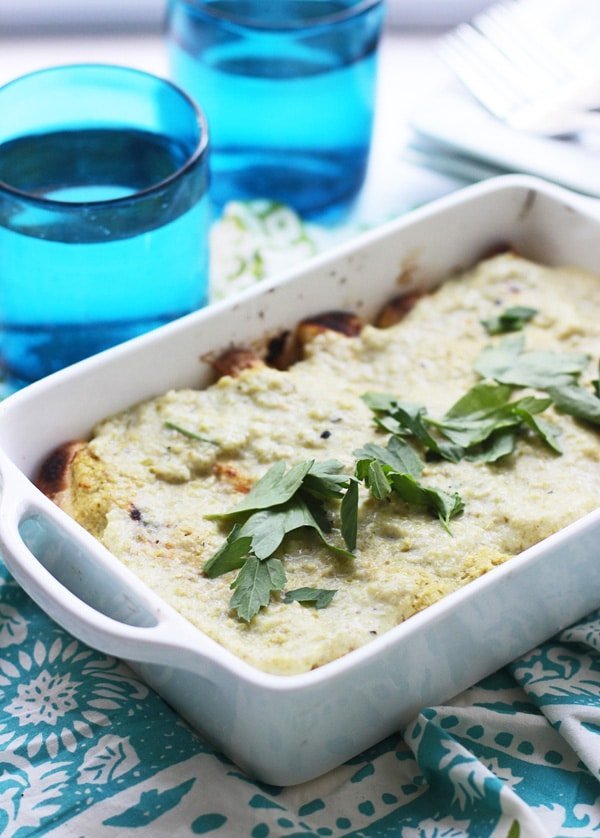 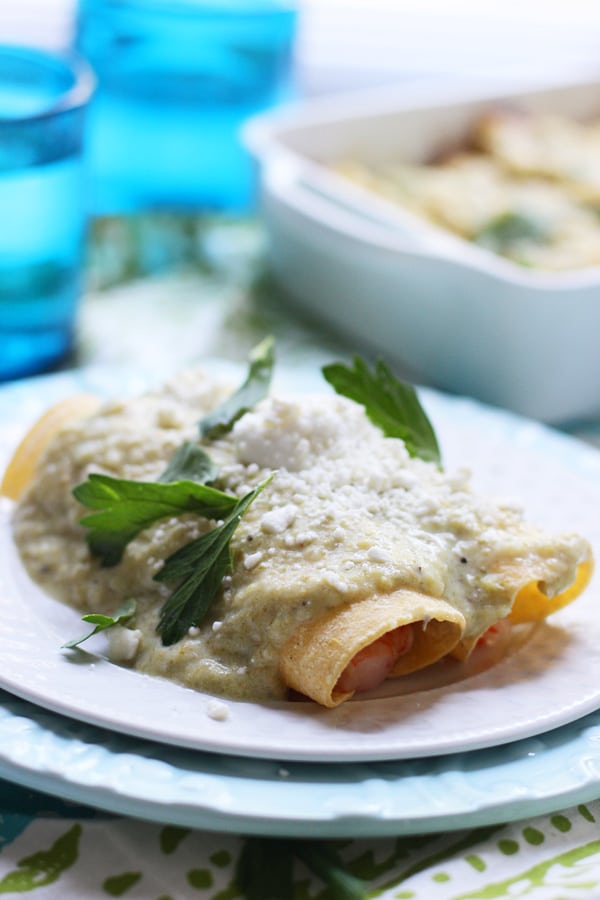 These shrimp and crab enchiladas are smothered in a spicy hatch pepper and tomatillo sauce making for a healthy AND gluten free Mexican dinner.