This Creamy Tuna Pasta Salad with Pineapple is one of my favorite lunches to make when I need to throw something together quickly from the pantry. Aldente penne noodles are tossed with flaked tuna, pineapple, crunchy celery, and creamy American cheese. Everything is then tossed in a super light mayo-based dressing that won’t weigh you down. 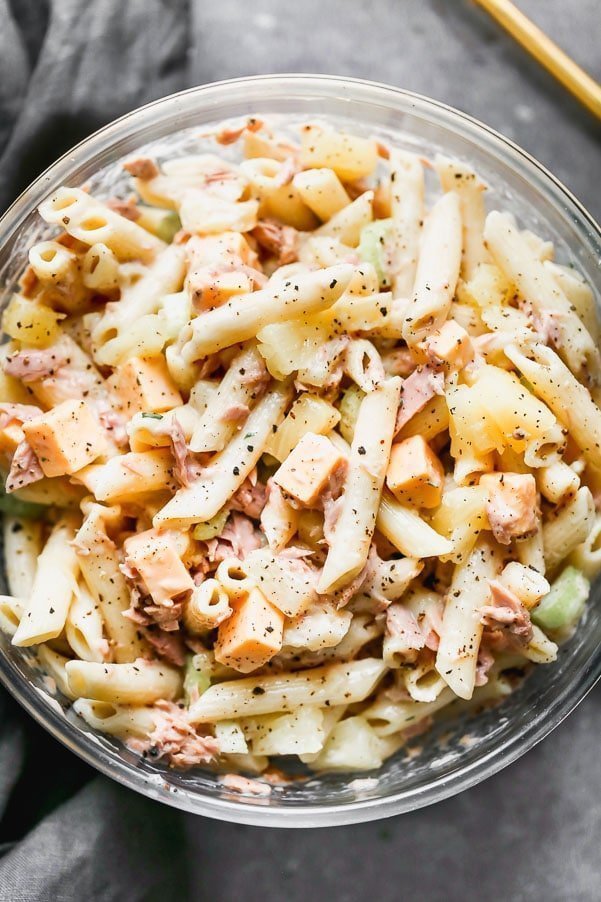 Creamy Tuna Pasta Salad with Pineapple is one of those old-school, simple recipes that just makes you feel GOOD. Unlike Grandma’s version of a classic Tuna Pasta Salad, this one is not drowned in a heavy dressing that will steal a day’s worth of your allotted calories and fat. Ours is indeed wrapped in a mayo-based dressing, but only uses just enough low-fat mayo to ever-so-slightly coat all the ingredients and give you the creaminess we all crave in a classic pasta salad.

Now, I’m guessing you may be doing a double take right now- pineapple and tuna together? In a pasta salad?

Yep. Your eyes did not deceive you. It’s true, flaked tuna plus sweet pineapple is surprisingly, so so good.Like, I can’t get enough of it.

It makes sense though, some of the most popular warm fish preparations are paired with fruit of some variety. Just here on the website, we have two of our favorites, Tilapia with watermelon and Chipotle Tacos with Mango Salsa. It’s the same idea with anything sweet and savory – it just works.

I grew up eating this sort of tropical take on a classic tuna salad, and to this day, it’s still one of my favorite lunches to throw together when my fridge has run dry and I only have a few pantry ingredients. Coincidentally, I actually made this Creamy Tuna Pasta Salad before all of the craziness in our world began, so because this is made with almost all pantry and shelf-stable items, this is a great one to have in your repertoire for lunches over these next few weeks.

In addition to the pasta, flaked tuna and pineapple, there’s also creamy diced American cheese scattered about (see notes), crunchy celery, and if you’re into it, a handful or so of chopped red onions.

My very favorite way to eat this Creamy Tuna Pasta Salad is straight out of the bowl, while standing, trying to get the perfect bite every time. A few penne noodles, some bits of pineapple, tuna, a crunchy piece of celery, and that gooey, ultra-creamy American cheese. 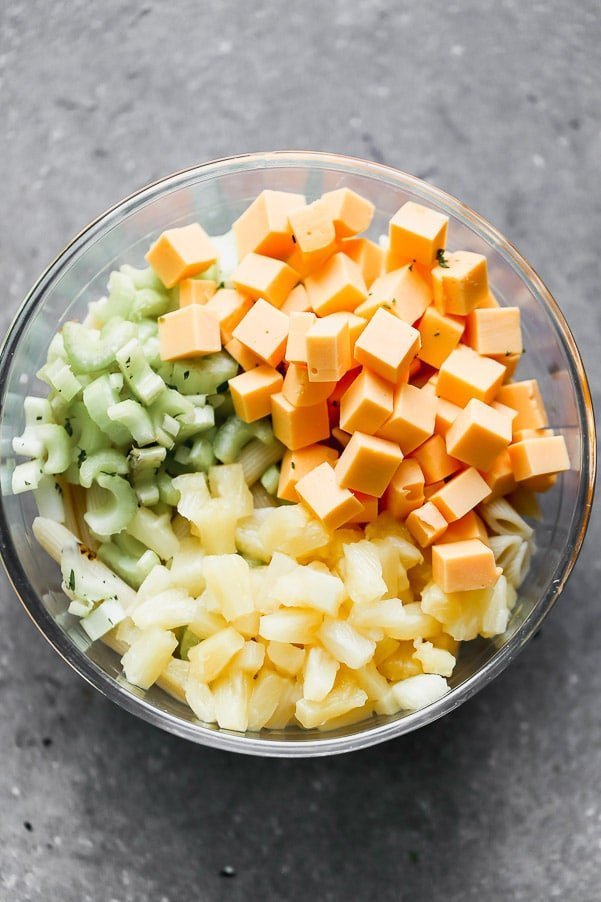 Pasta. There are a number of pastas that could work here, but my favorite to use for this tuna pasta salad is penne. I love how the sweet and savory dressing gets inside the nooks and crannies of the noodles, how the tuna sticks to the outside, and how the creamy American cheese basically melts into it.

Tuna. Your favorite canned or packaged tuna will work great here. Mine was packed in water, but if you only have tuna packed in oil, that’s fine as well. Just make sure to drain out as much as you can.

Pineapple. Canned pineapple in 100% juice is what I use here. Because we use the pineapple juice in the tuna pasta salad dressing, it just makes sense to use canned pineapple. Plus we’re trying to use shelf-friendly items here! 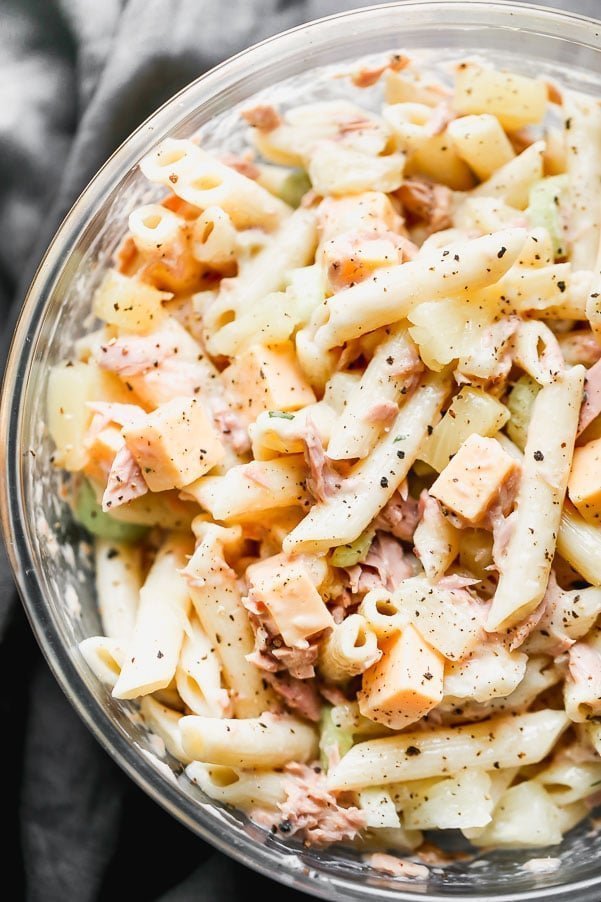 Cheese. Ok, so American cheese doesn’t have the best rap. But you’re going to go to the deli counter and have them cut you a big piece of their best yellow American cheese. It’s essential for this recipe.

After the American cheese gets tossed with the other ingredients and dressing, it becomes irresistibly creamy and it adds the most lovely, mild cheese flavor you just can’t get with anything else. Trust me on this one.

Mayo. I never ever use full-fat mayo. And whether it be in my tuna salad sandwiches, chicken salad sandwiches, or anything of that nature, I almost always have a minimal amount of mayo compared to other recipes. I firm believe low-fat mayo and real mayo taste the exact same, and all you need it a little bit to get that creamy texture we’re all after.

Pineapple juice. Yep. There’s just two ingredients in this tuna pasta salad dressing. TWO! Well, four if you count salt and pepper, which doesn’t count. Pineapple juice not only adds a lovely subtle sweet flavor to the tuna pasta salad, but it loosens up the mayo so you do’t have to add as much.

Remember though, you need 100% pineapple juice, not syrup. 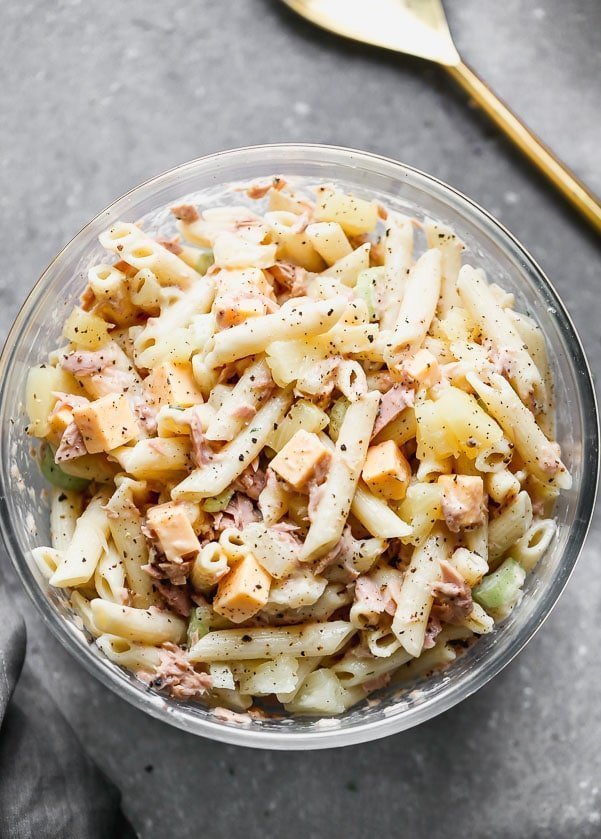 How to make Tuna Pasta Salad

Ok you guys. This is going to be the simplest explanation for a recipe, maybe ever. And not only is it simple, it’s quick. Like really quick. Here’s how it goes down.

Cook the pasta. Bring a large pot of water to a rolling boil. Add in a handful of salt. It should be as salty as the sea. Just like any pasta recipe, it’s extremely important to cook the pasta only until it’s aldente. You want it to be soft, but still have a nice bite to it. Unlike most pasta recipes, you want to rinse the pasta under cold water until it’s cool to the touch,

Toss everything together. Add the cooled pasta, tuna, pineapple, celery and onion to the bowl with the dressing. Toss until combined. Season with salt and pepper.

Absolutely. In fact, I actually think this tuna pasta salad is even better after it’s sat in the fridge for an hour or so. I eat it throughout the week, and every time I take a bite, I think it tastes better than the day before. I think it’s because as it sits, the American cheese just gets creamier and creamier. It’s pretty great. 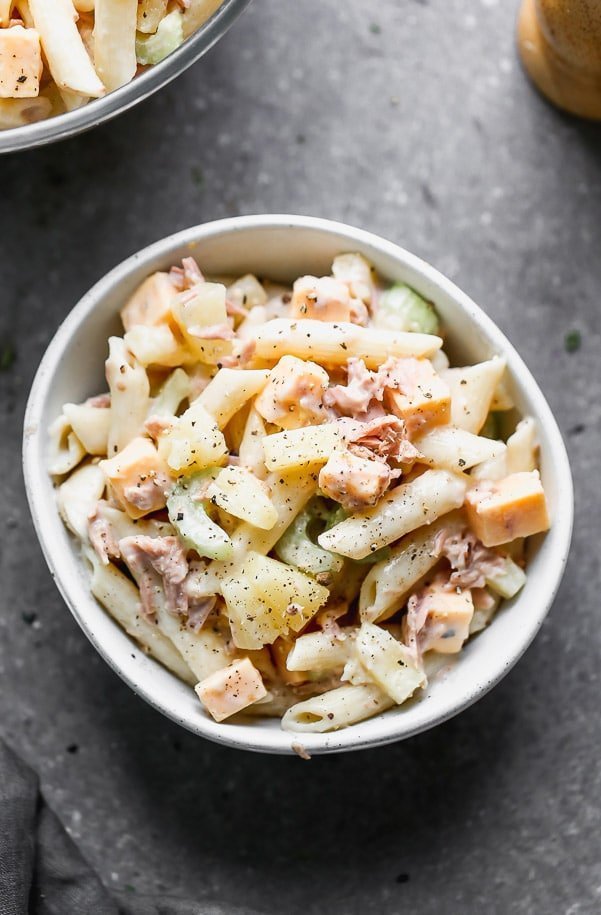 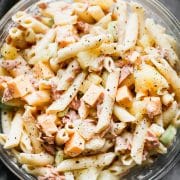 This Creamy Tuna Pasta Salad with Pineapple is one of my favorite lunches to make when I need to throw something together quickly from the pantry. Aldente penne noodles are tossed with flaked tuna, pineapple, crunchy celery, and creamy American cheese. Everything is then tossed in a super light mayo-based dressing that won't weigh you down.