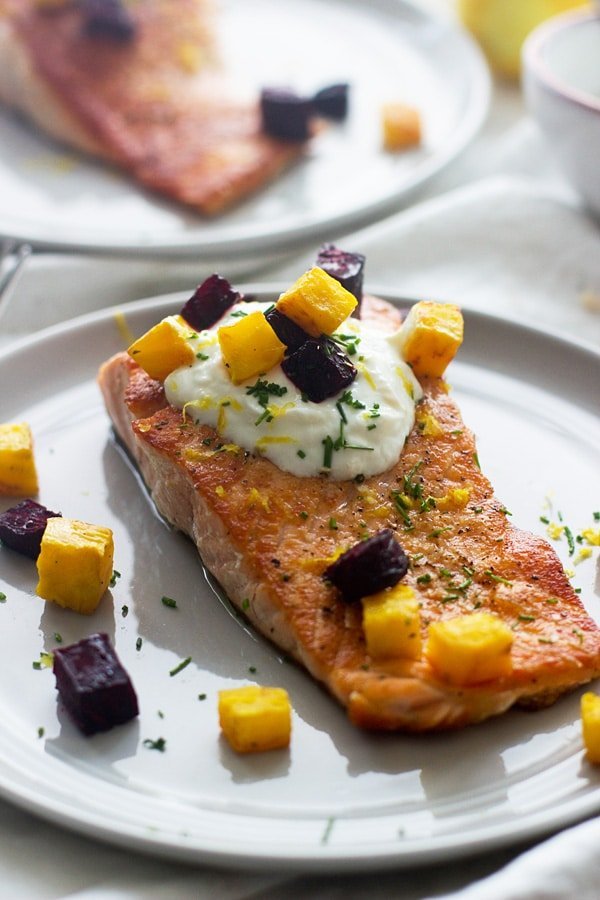 I could eat salmon every day for the rest of my life and be completely satisfied. It used to be a fish I could only tolerate every once in a while, both for its potent flavor and its inherent richness, but as I’ve gotten older, I’ve come to appreciate that it actually has a prominent flavor unlike tilapia or cod which are pretty much just blank canvases.

While occasionally I do like a blank canvas, which gives me the ability to transform a mild fish into whatever crazy concoction my heart desires, there’s something to be said about just letting the fish be front and center. Because salmon does have a more distinguished taste, when cooking with it, I like to keep things relatively humble when it comes to the ingredients and preparation. 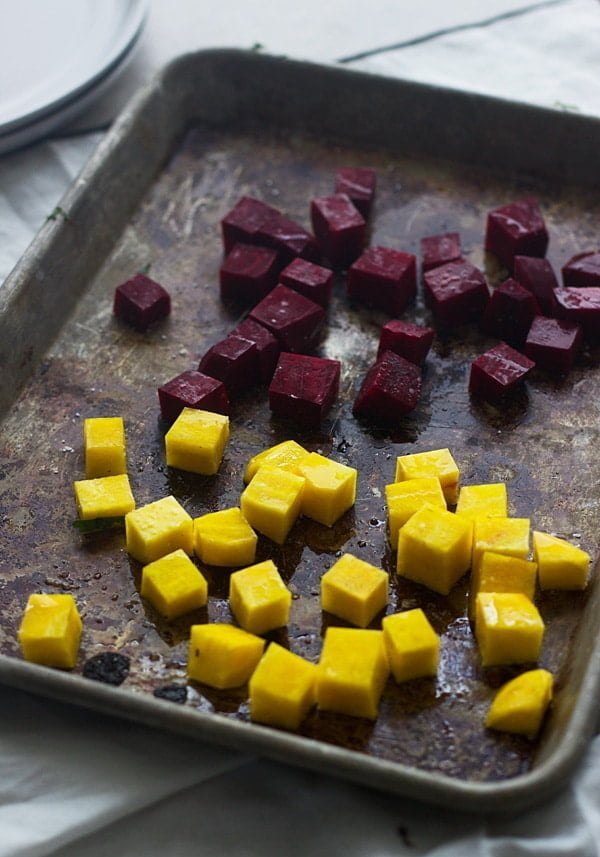 Most of my simple, weeknight preparations don’t warrant a recipe as I usually just simply season it with a bit of salt and pepper, pan-sear the filet and then serve it with a side of roasted asparagus and rice of some sort – not exactly blog-worthy. So while I would definitely categorize today’s recipe as “simple” in the sense that it doesn’t take much time, effort or ingredients to put together, the flavor is anything but.

Each salmon filet is sprinkled simply with a little bit of salt and pepper and then pan-seared in a super hot cast-iron skillet skin side up until its super crispy. I highly highly recommend using a seasoned cast-iron skillet, it gives this irresistibly crispy crust hard to achieve in any other cooking vessel, plus if seasoned properly (the skillet), you barely have to put any oil in the pan. 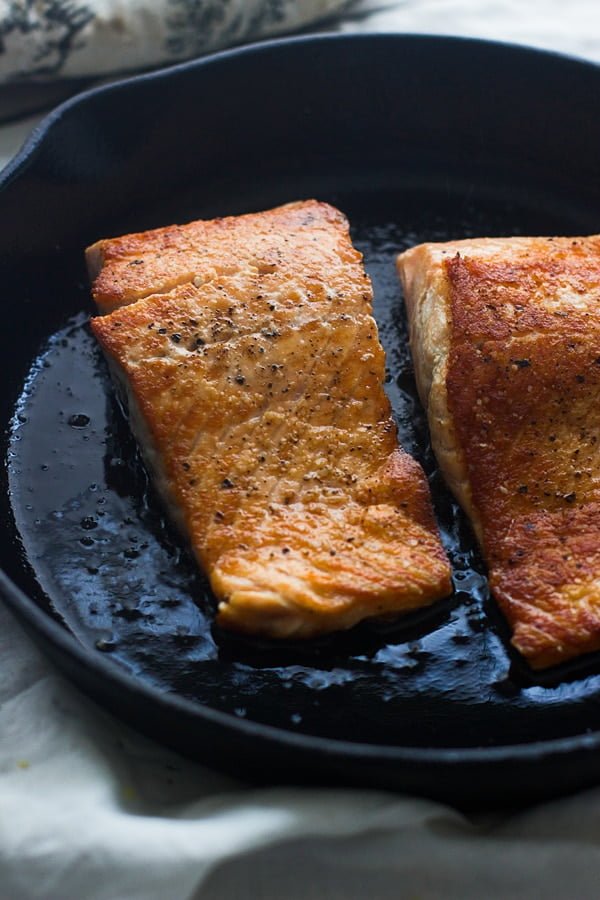 I get a lot of questions and concerns about cooking salmon, most people steer far away from it because they’re too scared, but honestly, to me, fish, salmon in particular, is even easier to prepare than any other type of meat. Because salmon has such a high fat content, even when overcooked the meat stays extremely moist and palatable. So while I do prefer my salmon to be more on the medium-well side, it’s really not the end of the world if it gets past that level.

Also a big tip that helps me out a lot and doesn’t just apply to fish, is to not mess with it once you set it down in the pan. If you try to flip the fish before its ready, all it will do is stick to the pan. Once you can see the edges start to brown, gently use a spatula and try to flip it, if it releases easily, its ready, if you still feel a little resistance, let it cook just a touch longer. 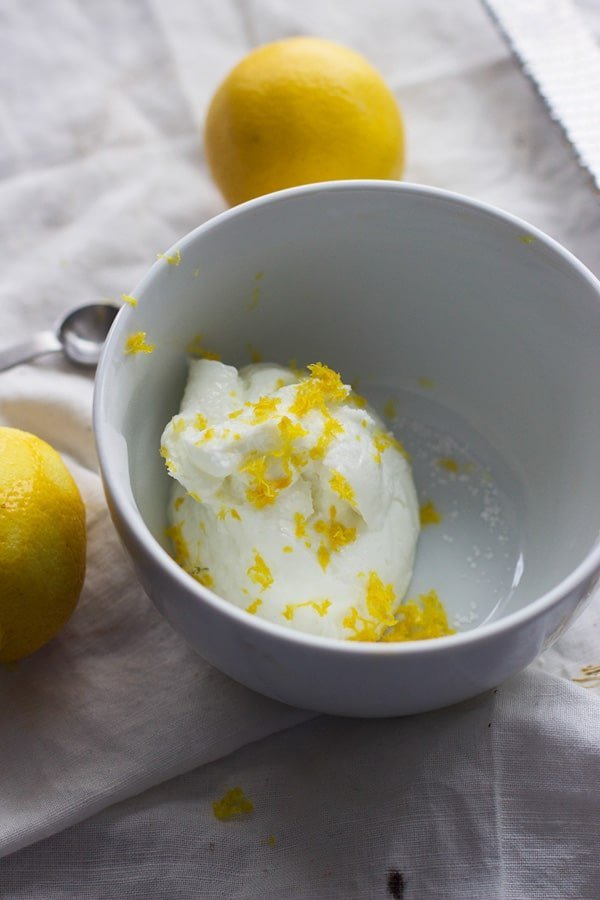 I’ve always loved the pairing of beets with salmon, and even more so, the pairing of citrus with beets and salmon. There’s just something about the sweetness of the beets, the zippy acidic flavor of the lemon and the butterniness of the salmon that I just adore.

Here I (again) simply roasted a few fresh beets with some olive oil, salt and pepper. I went with a combination of red and golden beets purely for aesthetic reasons, but you can use any combination you prefer, I just knew I wanted a pop of yellow to make it feel more spring-like.

The citrus factor comes in the form of a “sauce” made up of non-fat plain Greek yogurt, lemon juice, lemon zest, garlic and salt. Super simple, but so so good.

Once the salmon comes out of the hot pan, it’s transferred to your serving plate, dotted with the chopped beets and a dollop of lemon sauce.

I served it with a simple side of quinoa, but really anything goes – rice, pasta, couscous…

This is the kind of dinner I really love, something super simple, but also something that has that “wow” factor when plated and later, when consumed.

Did I convert you to a salmon lover?? 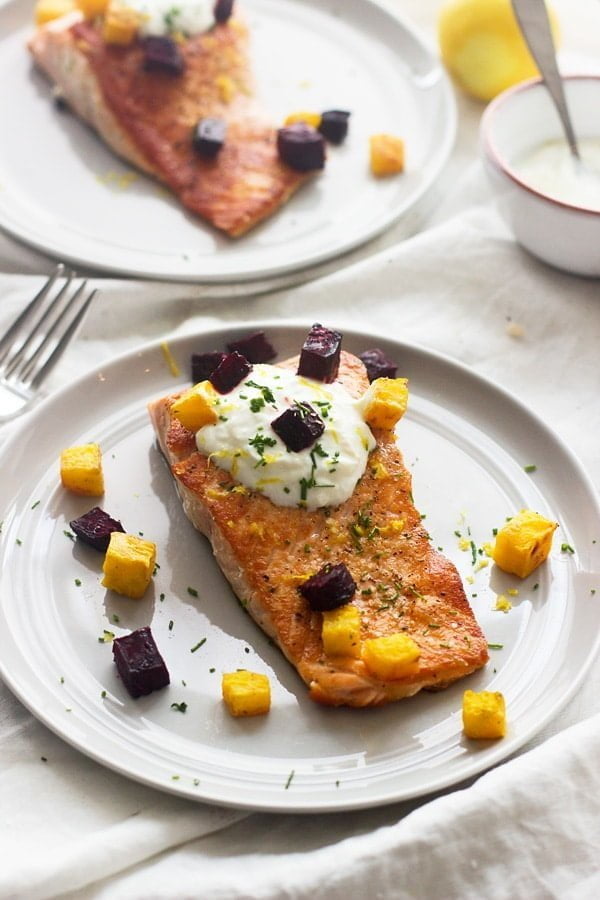