This Truffle Pasta with Triple Truffle Cream Sauce is the perfect way to make Valentine’s Day (or any day!) a little extra special! Homemade spaghetti is twirled with heavy cream, and not one, not two, but three different forms of truffle – truffle butter, truffle gouda cheese and truffle salt. 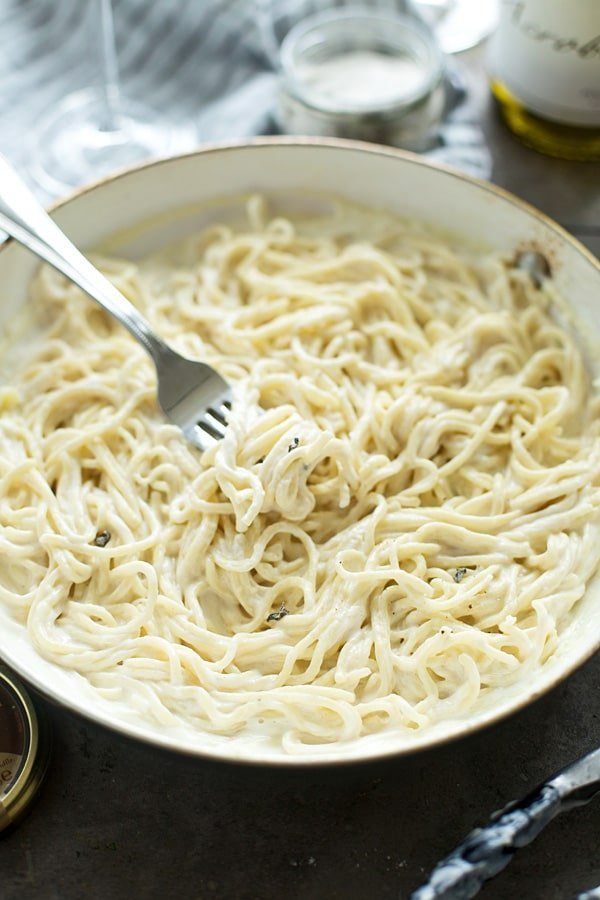 Have I told you how much I love Valentine’s Day??

And it’s not just because I’m married and my husband is basically obligated to take me to dinner and buy me a gorgeous arrangement of flowers, although that doesn’t hurt.

I love it because it’s an excuse to wear obnoxious amounts of red and pink unapologetically.

I love it because I can dress Teddy up in a red shirt that says heartbreaker on it, and Kevin can’t argue that he doesn’t look “manly” enough.

But most of all, I love it because I get to spoil my family with the most decadent meal, and this year, that’s this Truffle Pasta with Triple Truffle Cream Sauce. We have:

Our version of truffle pasta includes not one, not two, but three different forms of truffle goodness. It’s all wrapped up in a luxurious cream sauce, a little bit of butter and the most perfect chewy homemade spaghetti noodles.

Guys, if heaven were ever on a plate. It would be this. 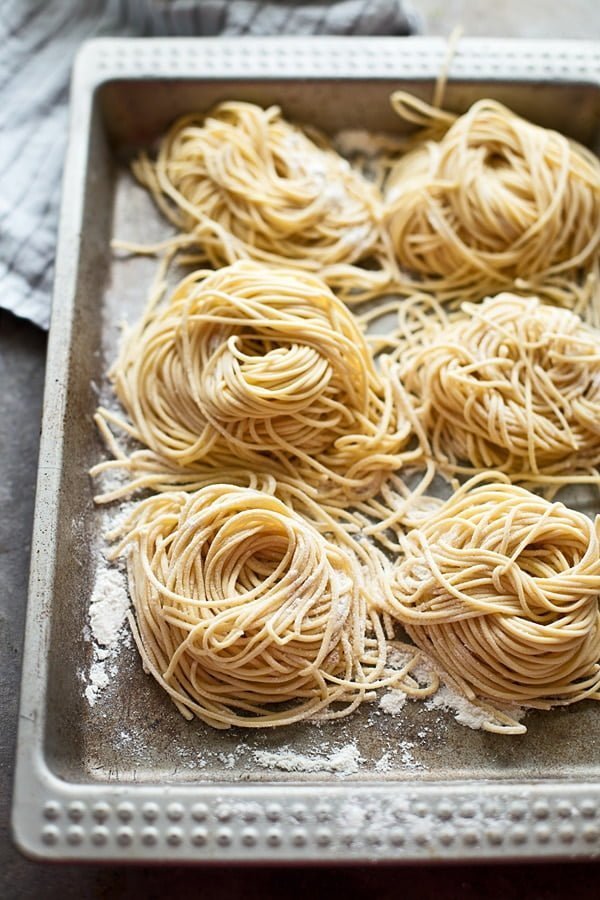 How to make homemade spaghetti

So, first things first, fresh spaghetti. Before my first was born, I made homemade pasta all the time, and while it’s not too terribly difficult or time consuming, I haven’t made it nearly as much since he’s been born. So! I decided I needed to stop making excuses, and find the time, because there is nothing on this earth that makes me happier than eating a big bowl of fresh pasta I’ve made myself.

Obviously is you want to skip making your own pasta, you can do that.

The recipe for the pasta dough, is sort of a hodgepodge between a Lidia’s Bastianich recipe from this cookbook (which is one of my favorites BTW) and the recipe that comes with the attachment.

Now, the sauce. Oh my gosh, the sauce. Basically, I like to call our truffle cream sauce is an Alfredo sauce on steroids. It has all the components of a classic Alfredo, but it’s taken up a thousand notches. It first starts out with truffle butter, which you can find pretty easily these days, but if you can’t, there’s always good Amazon

to come through for you. You’ll need:

Truffle butter. You can use black or white truffle-infused butter, I used black here, but I’ve used white before and it’s just as delicious. It’s pretty easily accessible these days and actually pretty affordable. My favorite place to get it is at Whole Foods, but I believe Trader Joe’s also sells it.

Heavy cream. An essential ingredient to a true cream sauce.

Truffle cheese. There are a variety of different truffle cheeses out there these, days, but I really like to use a truffle gouda. An truffle cheddar will also work great.

Parmesan. Because a soft truffle gouda doesn’t have a super sharp flavor (unless it’s aged for a long time), I like to add in a little bit of parmesan as well.

Truffle salt. Like truffle butter, this is pretty easily accessible these days. We use it to do add another layer of truffle to the finished product. Keep in mind, that it is typically VERY salty, so use sparingly and then add more as needed. 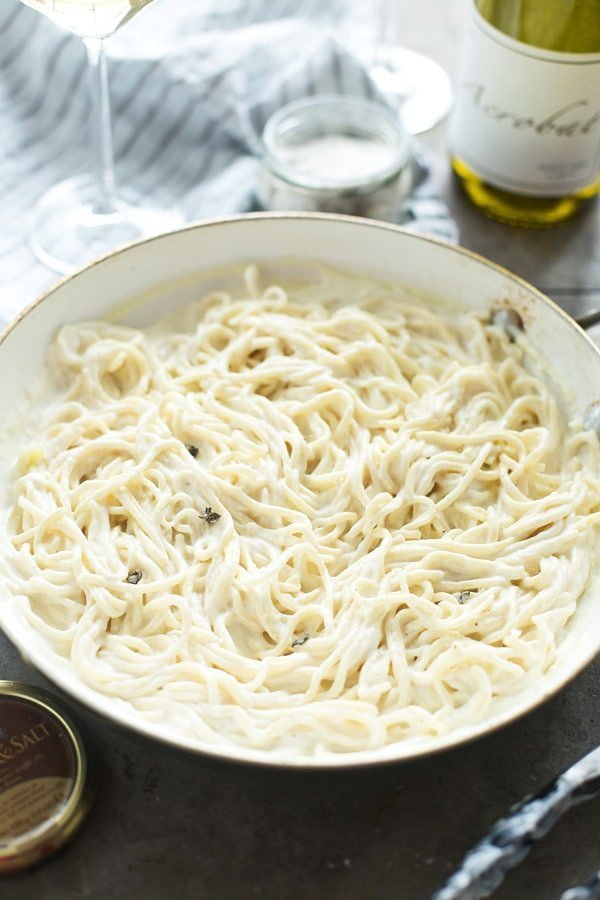 Cook the pasta. We’ve already talked about making, the pasta, but what you’ll need to do next is cook. Bring a large pot of water to a rolling boil. Season with salt. If you’re using fresh pasta, you’ll only need to cook it for 3-4. minutes.

While the pasta water comes to a boil, but before adding the pasta, make the sauce. Melt truffle butter over a low heat and then whisk in cream. Bring to a boil and reduce to a simmer until thickened.

Slowly whisk in the cheeses, continue to whisk until the cheese has melted. Simmer until thickened, about 5 minutes.

Toss the pasta and truffle cream sauce together. Once the pasta cooks, use tongs to transfer the pasta to the sauce. Add truffle salt. Toss to combine. Season with more truffle salt and black pepper.

What to serve with truffle pasta 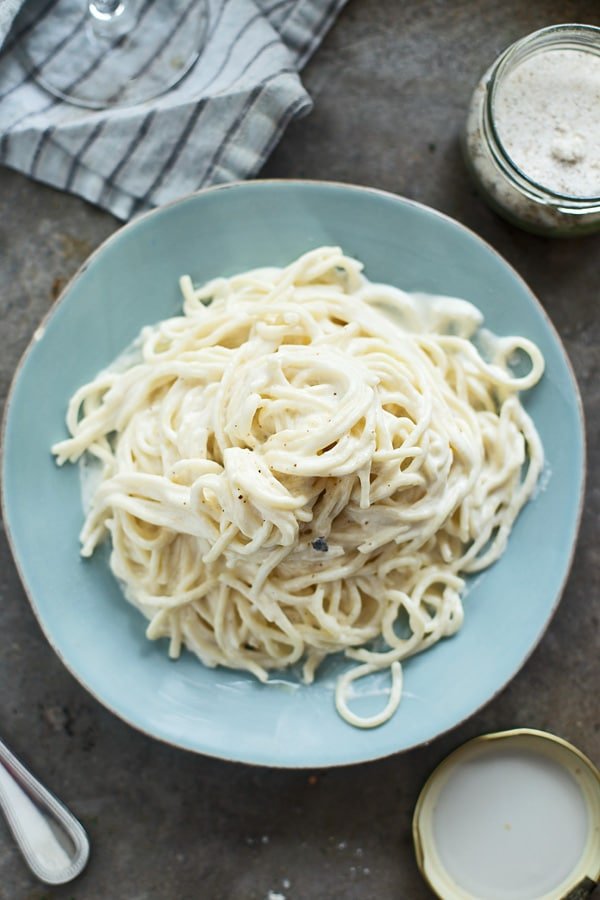 Print Rate Email
This Fresh Spaghetti with Triple Truffle Cream Sauce is the perfect way to make Valentine’s Day a little extra special! Homemade spaghetti is twirled with heavy cream, and not one, not two, but three different forms of truffle – truffle butter, truffle gouda cheese and truffle salt.
Prevent your screen from going dark
4 people