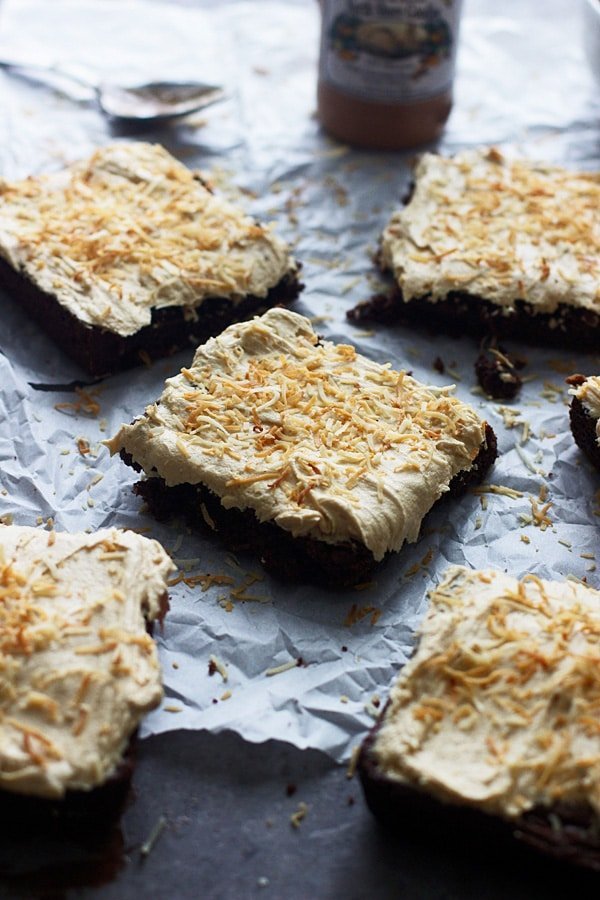 Technically these brownies are called Coconut Oil Brownies with Coconut Peanut Butter Frosting, but what they really should be called are The Most Delicious Indescribable Coconut Oil Coconut Brownies with The Most FLUFFY Luscious Macadamia Honey Coconut Peanut Butter Frosting. But that would have been a heck of a mouthful and a total train wreck in Google. So the name is simplified.

At first glance these look like a sort of fancified version of an ordinary brownie, but after the first bite – and the following are not my words – your palate gets hit with the most wonderful “flavor explosion” of chocolate, peanut butter and coconut. Whoever deemed peanut butter and chocolate the mother of all flavor combinations clearly hasn’t tasted it with the addition of coconut. Seriously, so good. 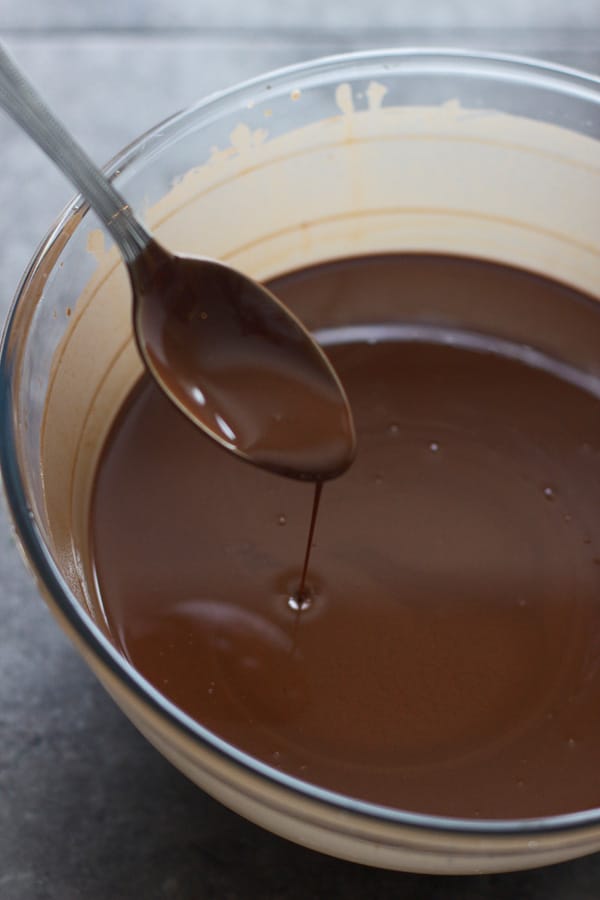 The base of the brownie is purely chocolate – no cocoa powder involved – and is actually an adaptation of Ina Garten’s outrageous brownie recipe. I first fell in love with her recipe years ago, when my Mom was a caterer and preparing boxed lunches for a variety of businesses around town. Ina’s brownies were always a dessert that made an appearance in the packages and of course they were met with rave reviews and praises. If I was lucky, there would be a few left over for us to snack on at home…. and most of the time, I was a very lucky girl. Since then it’s been my go-to recipe whenever I’m craving a little chocolate indulgence, although as I do with most recipes, I’ve tweaked some of the directions and ingredients over the years to better suit my taste.

I’ve always cut back on the amount of butter she uses, (I find it doesn’t need it all) but in the last year or so, probably every other time I make them, I swap out the butter for more heart-healthy coconut oil. It gives the brownies the most perfect coconut-y essence, and while it doesn’t necessarily cut down on the amount of fat included in each bite, it does make you feel a teensy bit better about eating three giant brownies one right after the other (which you will). 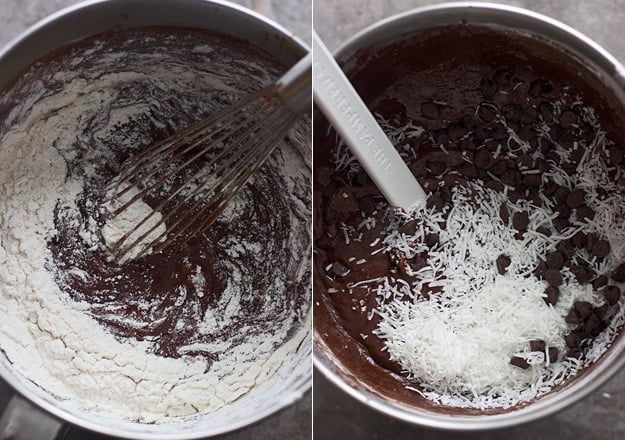 Two different kinds of chocolate in three different uses make an appearance in the batter; first semi-sweet chocolate chips are not only melted into the coconut oil, but they’re also sprinkled throughout the batter in the end; and second, bittersweet baking chocolate is also melted into the oil and other chocolate. While most recipes will advise you to melt the chocolate and fat in a double broiler, I find that it’s a big waste of time and dirties up more dishes than necessary. Instead, I use the microwave. Which may sound kind of weird, but trust me, it’s the quickest and easiest way to melt chocolate without sweating over the stove and constantly worrying about burning said chocolate. All you do is dump everything into a microwave-safe bowl, pop it into the microwave and melt it in 30-second increments. After each 30-second blast, pull the entire bowl out of the microwave, give it a stir and repeat. Once the chocolate has few stray pieces that haven’t melted yet, pull the bowl out and keep stirring until everything melts. Perfect silky-smooth chocolate every time.

The rest of the ingredients are pretty standard when it comes to a brownie batter – flour (not much of it), sugar, eggs, baking powder, salt (I add an extra ½ teaspoon) and vanilla. The batter gets poured into a giant sheet pan (this makes A LOT of brownies) and baked off for about 25 minutes.

I want to make this clear, DO NOT OVERBAKE the brownies. Brownies are easily overcooked, so err on the side of caution; you’d rather have them too gooey, than too dry. Ina says to pull them out when a tooth pick is stuck in the middle of the brownies and comes out dry, but I actually like to see a few crumbs attached to the pick when it comes out. Also, be sure to let the brownies cool completely (Be strong!), or they will be an absolute nightmare to get out of the pan. 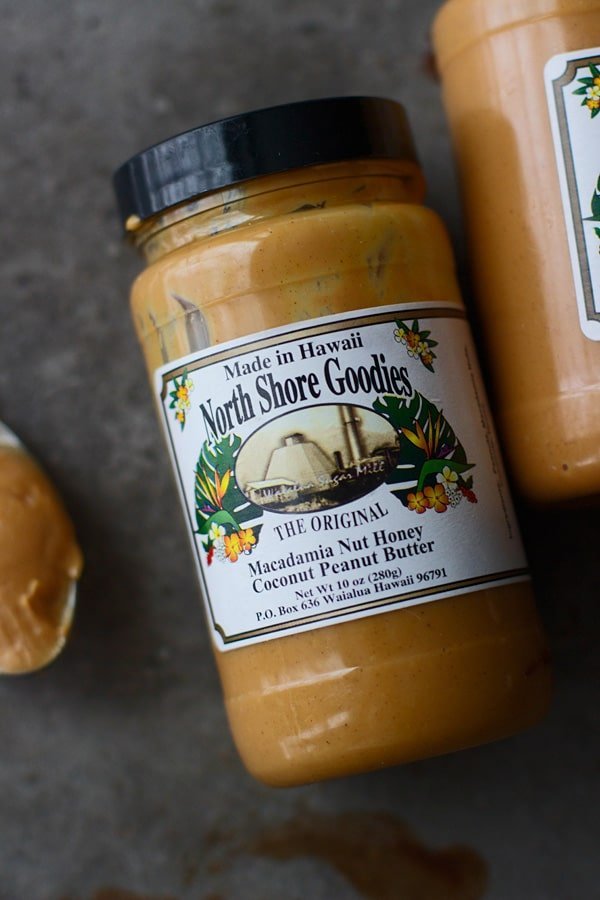 Oh! I forgot to tell you there’s also quite of bit of actual shredded (unsweetened) coconut in the batter as well. You can omit if you like, but I really like the added element of coconut flavor and texture if gives the final product.

SO! Now, for the frosting.

The most perfect, fluffy, silky-smooth coconut peanut butter frosting. This stuff is serious.

Although first, I want to share a disclosure with you; you will probably not be able to find the peanut butter that I used for this recipe. My girlfriend Katie, happens to live in Hawaii, so whenever she comes back to KC to visit she brings me Hawaiian treats (aren’t I lucky) and one the more recent items she gifted me with was this gourmet peanut butter made from a local company down there. Now of course you can buy the peanut butter straight from there, but I’m pretty sure the shipping costs are outrageous, so if you can’t find a similar peanut butter at your local grocery store (I’d recommend Whole Foods), I found what I think to be a comparable variety here. If you can’t find any of that, or just don’t want to look, you could also just use regular peanut butter and add in a couple tablespoons of honey and ¼ cup or so of solidified coconut oil. 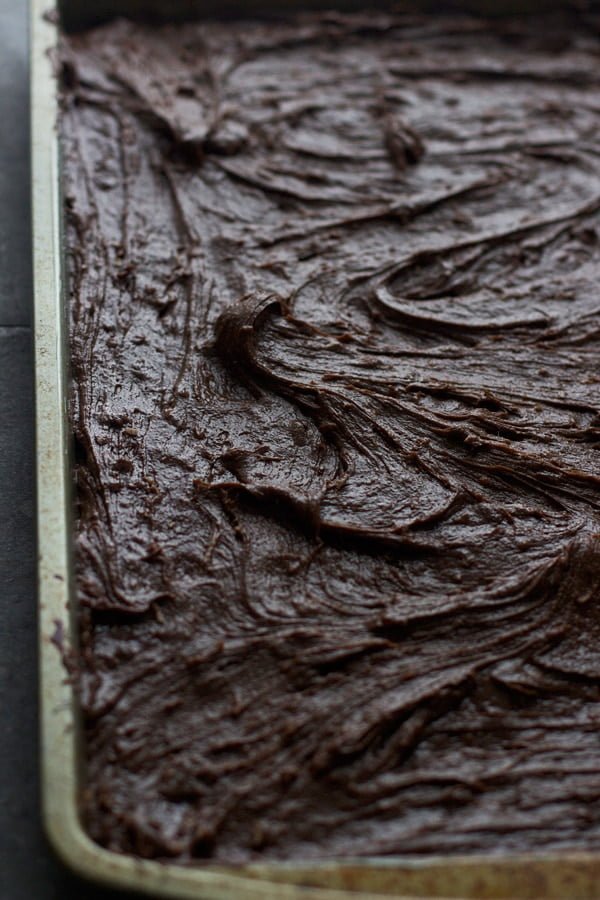 With only four ingredients in the frosting – butter, peanut butter, powdered sugar and milk – this is one of the simplest frostings I’ve ever made and literally foolproof. No slowly adding the butter in one pellet at a time. No melted sugar. No whipping up egg whites. Just a straight-forward-comes-together-in-five-minutes frosting.

Basically the only thing you need to be careful of is to make sure your butter is actually softened, otherwise the frosting will be lumpy – everything else just falls into place.

If you feel extra fancy, a little sprinkle of fleur de sel would be the perfect finishing touch.

Once the brownies are cooled the frosting is slathered across them all, and then sprinkled with a little bit more toasted coconut. It’s just my personal preference to use unsweetened coconut; because desserts are very easily “too sweet” for my taste, unsweetened coconut gives the brownies more coconut flavor without adding an additional sweet note, but if love the sweetened stuff, no worries that’s absolutely acceptable to use.

As previously mentioned, this makes a TON of brownies, so be prepared to share. And if you’re making them for the big love holiday coming up, which I’d recommend, you could easily half the recipe
and just use a standard-sized baking pan. 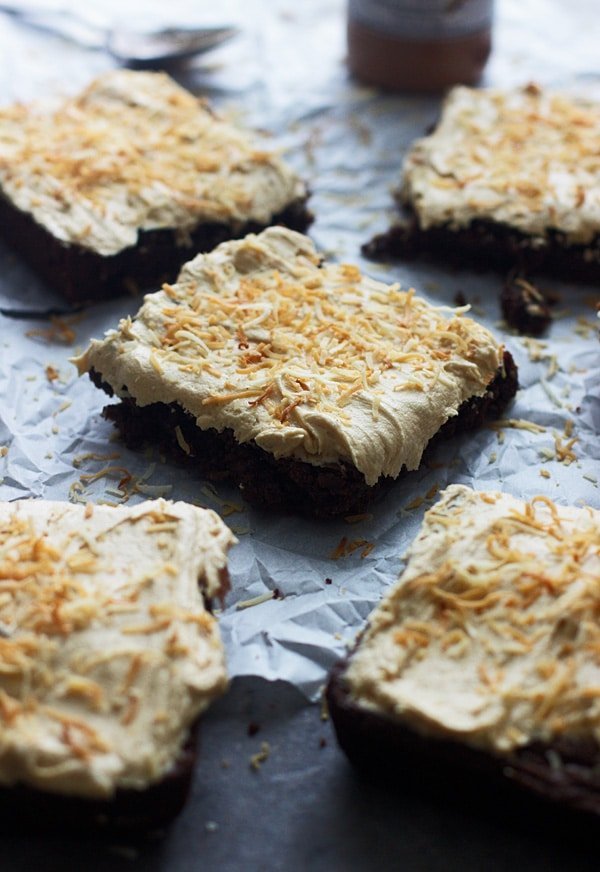 Now if you’ll excuse me, I think I’m going to eat one of these bad boys with my coffee for breakfast.