The day has come! The six tomato plants we (and when I say we, I mean Kevin) harvested back in May are finally producing bright red, juicy, and irresistibly sweet tomatoes. We’ve had them on BLTs, but today’s Greek Panzanella with Fried Goat Cheese Balls is officially the first recipe to utilize them. 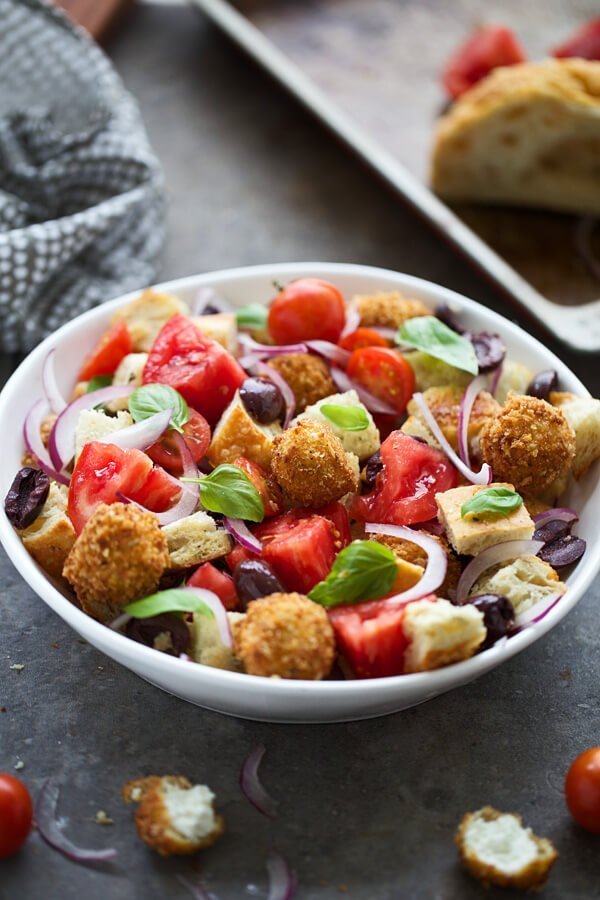 Have you heard of panzanella??

If you haven’t here’s the lowdown: At its core, it’s a classic Italian salad made with almost-stale bread, fresh summer tomatoes and some type of oil and vinegar mixture. What happens is the juice from the tomatoes and the vinaigrette trickle into the stale bread, making it super soft and crazy flavorful.

It’s one of my favorite easy salads to throw together, and I love that it it’s hearty enough to suffice for a meal. 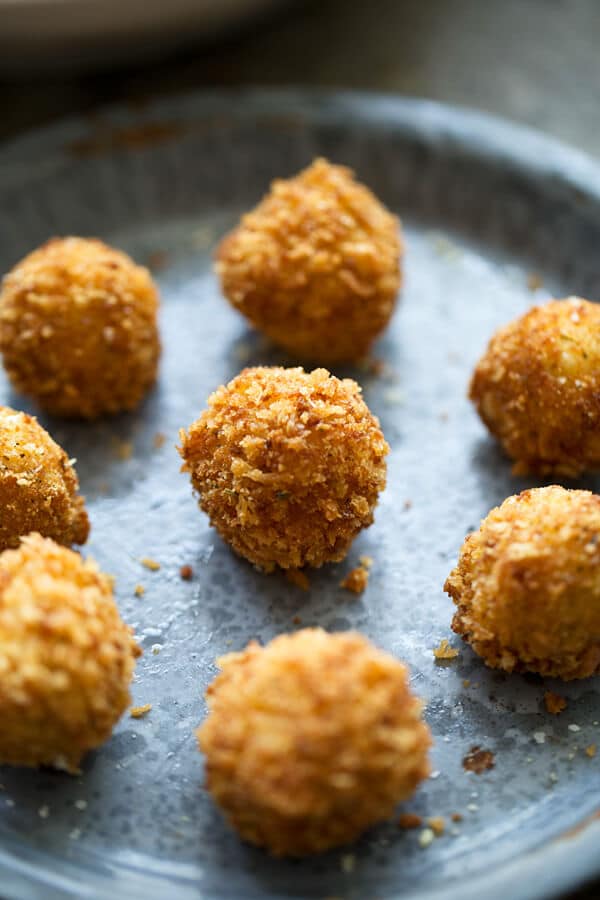 What’s also great about panzanella is it’s completely adaptable to what you have on hand or what season you’re in. Since we’re in the midst of summer, I stuck to a classic preparation with a Greek twist, but in the fall, I love to toss the crispy bread with roasted butternut squash, blue cheese and a balsamic vinaigrette. In the winter, it’s lovely with roasted mushrooms, pecorino cheese, sage and sherry vinegar.

Basically, if you have bread and some seasonal ingredients, you can make a panzanella salad.

While I typically try to use up old artisan bread as it’s intended, this time I saw an asiago ciabatta at the grocery store I had to have, and thought it would be the perfect compliment to the summer tomatoes and Greek-influenced ingredients. So instead of tossing stale bread with tomatoes and a vinaigrette, I cut the bread into cubes, tossed them with a little bit of olive oil and some salt, and then toasted them in a 350 degree oven until they were slightly crisp and just barely golden brown. 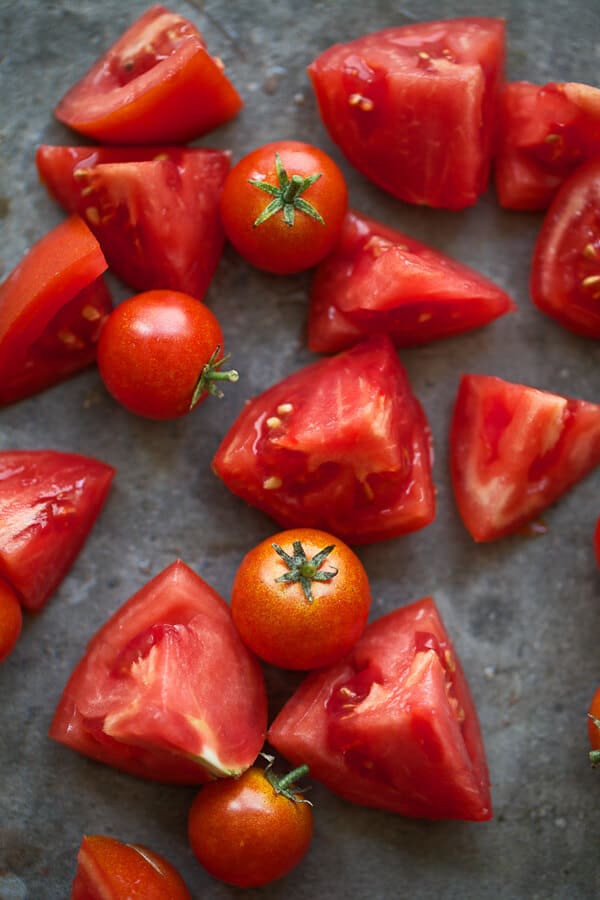 For the Greek piece of the puzzle, I threw in pitted and halved kalamata olives, plenty of thinly sliced red onion and then tossed everything in a super easy red wine vinaigrette.

Now, you could stop here, serve as is, and be none the wiser, but I love to add a cheesy element to all of my panzanella salads, so to take this over-the-top, I decided to whip up some fried goat cheese. It adds this wonderful creamy counterpart to the crisp bread and soft tomatoes, and I love how that it also adds a hint of tanginess to the finished product. 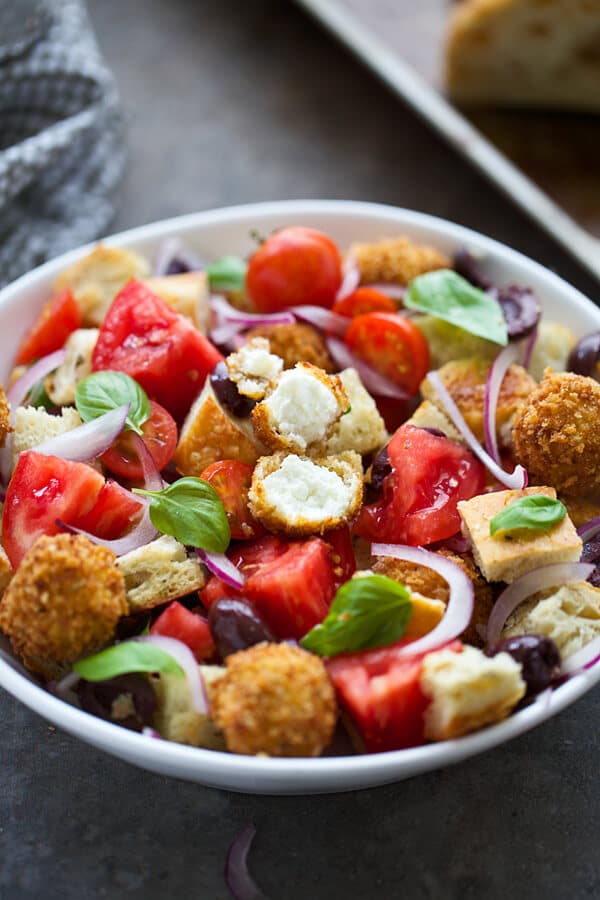 For a little bit of color and extra freshness, I finished the salad off with plenty of fresh basil. You can serve this right away, but sometimes it’s even better when it’s left to sit and soak for an hour or so.

Any other tomato recipes you’d love to see before summer is over?? 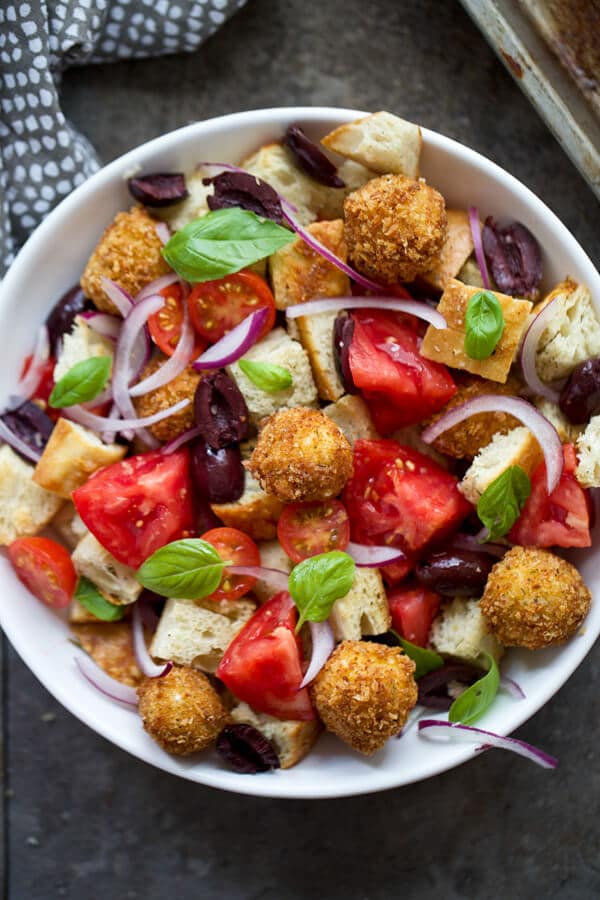 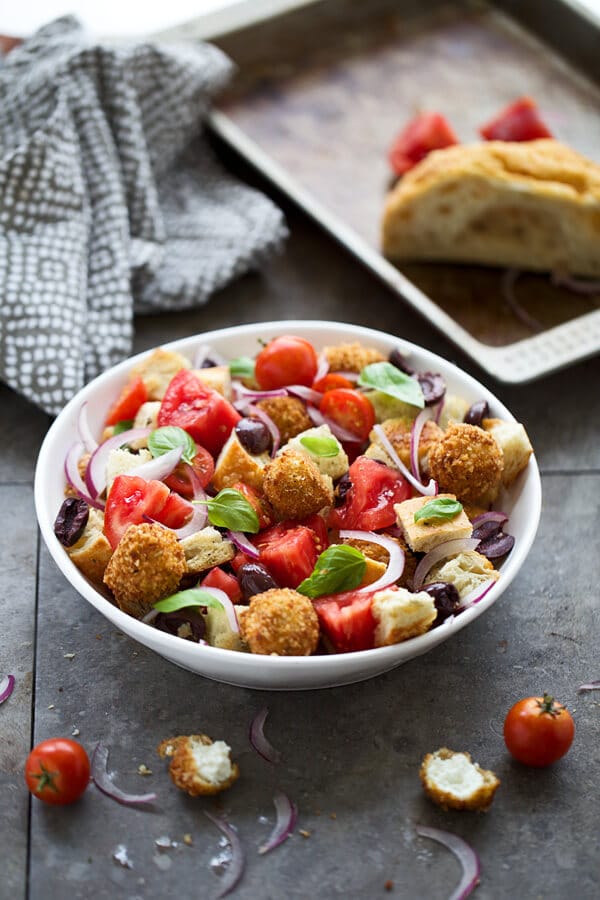