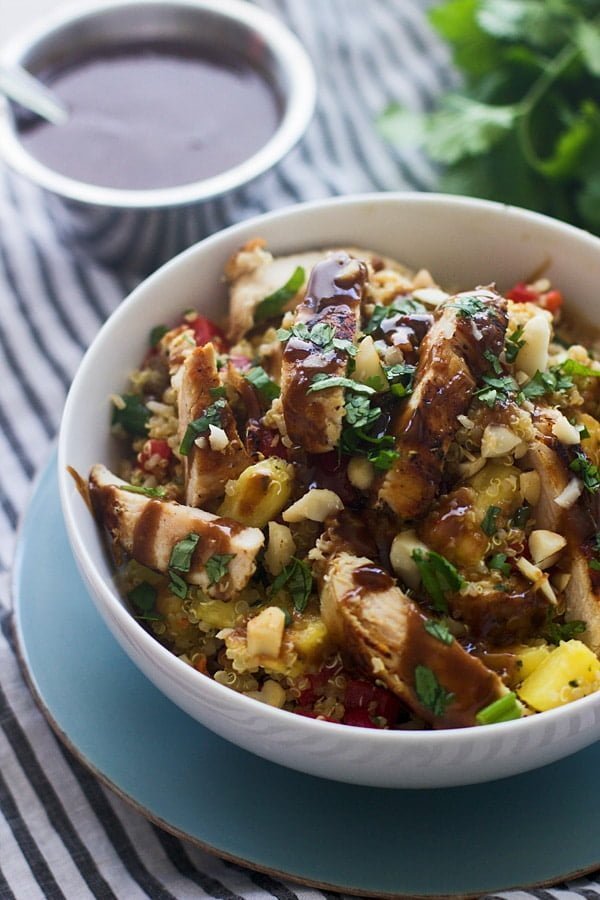 Healthy eating is easy when meals like these Hawaiian Quinoa Bowls are on the table. 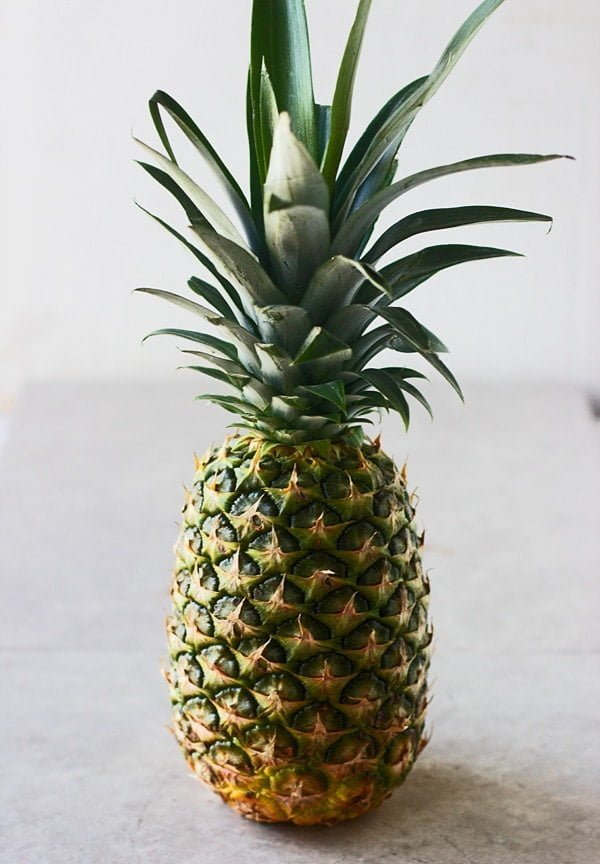 Keeping a healthy lifestyle is a constant battle for me, not because I love a few unhealthy foods, but because I love ALL the unhealthy foods. The pastas. The chips. The cheese. Pizza. Anything fried. All carbs. There is literally not one bread basket I’ve said no to in the last year, and of course where there’s bread there’s butter, and that’s really something I can’t say no to.

But, starting today I’ve made a conscious decision to only indulge a tiny bit until I get those extra winter pounds off my body.

No more giant cheeseburgers. No more fried shrimp and hushpuppies. No more pizza. And no more (gulp) midnight cheese snacks. (That one is gonna hurt.)

I’m hoping it only takes a few weeks. Wishful thinking? 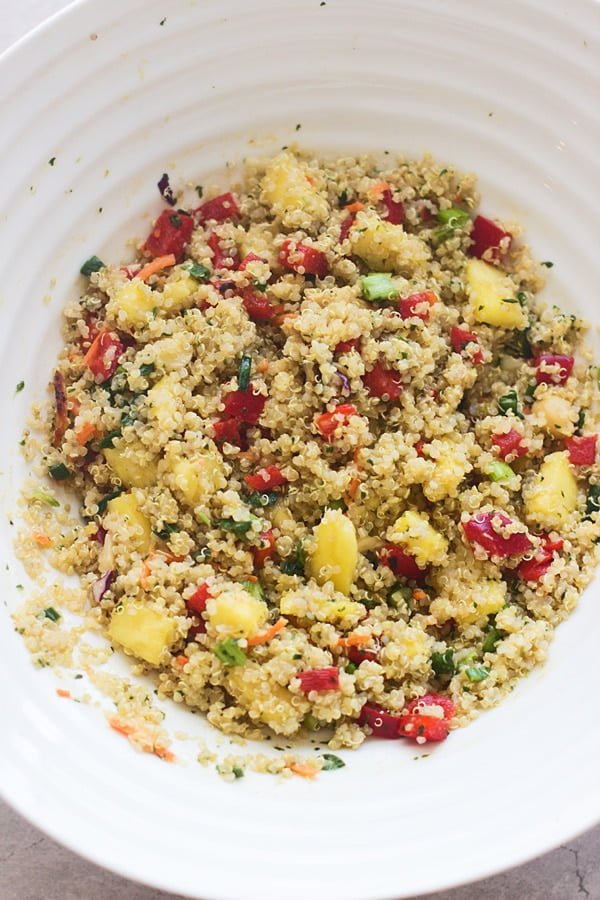 I’m not really proud of this, but I tend to go balls to the wall when dieting, I don’t starve myself by any means, but I have no problem swapping out either lunch or dinner for a smoothie. Much like most of my generation, I kind of have the “want it now” mentality and have a hard time waiting patiently for things to just happen, so I think that’s where my crazy weight loss strategies come in.

For breakfast I’ll have an apple with peanut butter or oatmeal, and then lunch I’ll have something similar to these bowls and then for dinner I’ll just have a smoothie, or vice versa; it might not be the best idea to swap out a meal for a smoothie, but it tends to work for me. 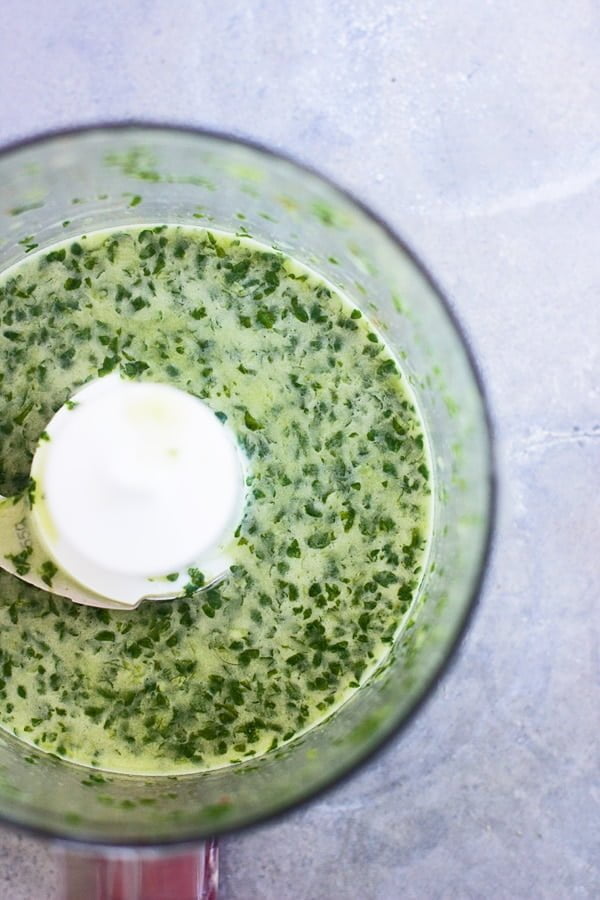 I call these quinoa “bowls,” but really it’s more of a quinoa salad. Everything is cold, which makes it the perfect meal to make ahead; I actually prepared almost everything the night before and then tossed everything together right before my girlfriend came over for lunch. 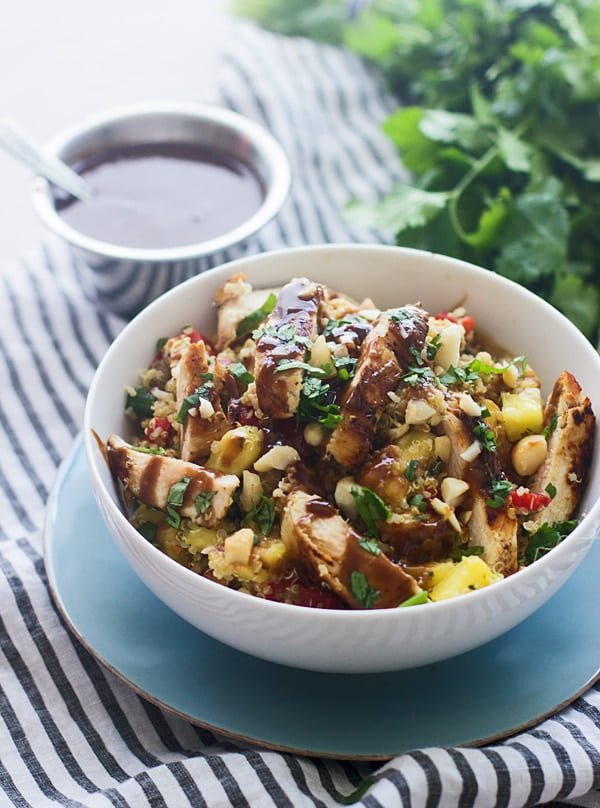 I’ve been on kind of a pineapple kick lately, due mostly to my eagerness to welcome summer, but also because it’s the perfect compliment to savory and spicy foods. I’ve been throwing it in everything from stir-frys, to layering it on sandwiches and even sprinkling it with a little bit of cayenne pepper and brown sugar, grilling it and eating for a snack, similar to what I did for these fish sliders. (Which would even be perfect for dessert with a little bit of ice cream.)

Here, I skipped the grilling and combined it with cooked, cooled quinoa, sliced red peppers, toasted macadamia nuts, shredded carrots and thinly sliced green onion. I tossed it all in a seriously addictive cilantro honey vinaigrette (that has quickly become my new favorite salad dressing) and a little bit more chopped cilantro. This combo alone would be the perfect side salad, but I wanted it to be a little more filling and exciting, so I topped it with some spicy grilled chicken and drizzled everything in my go-to spicy peanut sauce which I slather on pretty much anything I can.

A final sprinkle of chopped cilantro and macadamia nuts finish it off. 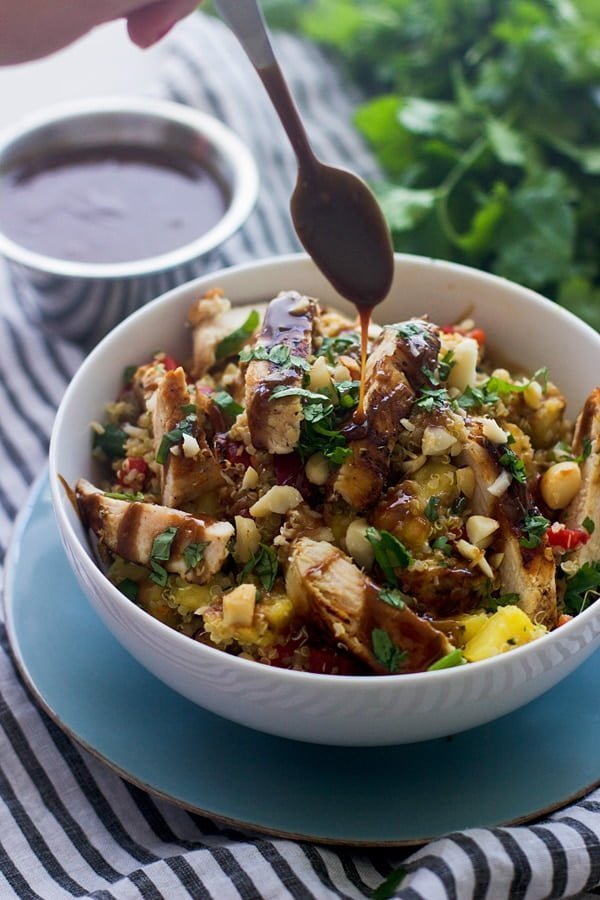