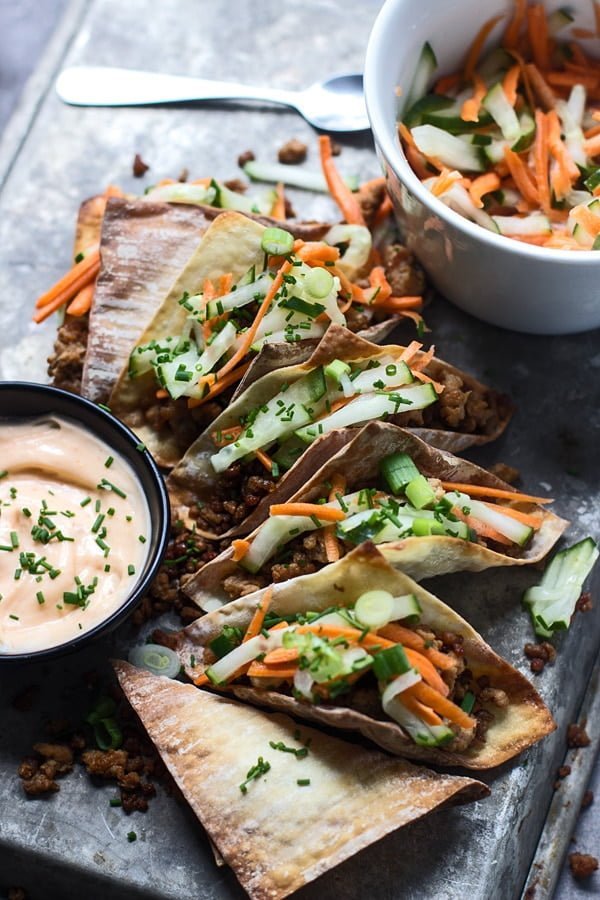 I have a slight obsession with all things banh mi. And all things mini. 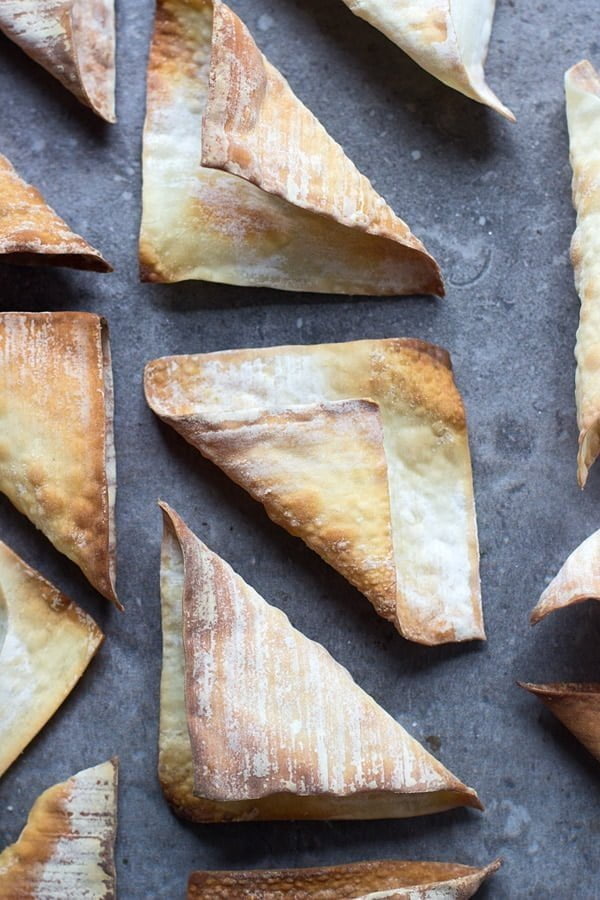 Of course banh mi purists might roll over in their grave when they see my version of a banh mi, since it’s doesn’t include the typical sliced pork or crispy baguette, but almost all the other flavors – pickled veggies, spicy mayo and briny fish sauce – remain constant.

In this miniature version, I used wonton wrappers to create a taco “shell” of sorts, easily done by draping the raw dough gently over a baking dish and then popping them into the oven for just a few minutes until they’re golden brown and crispy. 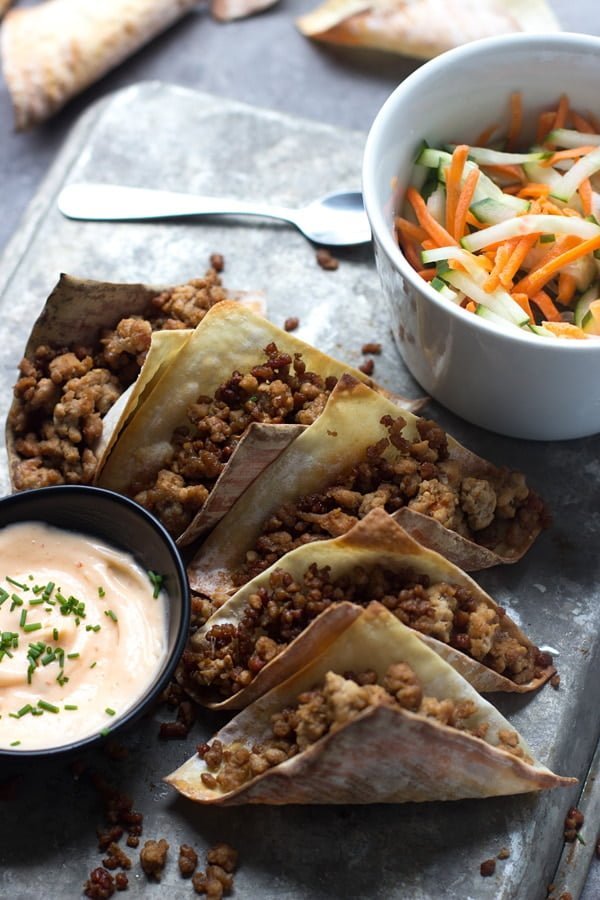 For the meat filling, I browned up a pound or so of ground pork in a little bit of sesame oil, then hit it with a generous splash of soy, fish sauce, brown sugar and sirracha. I’ve also substituted ground turkey or chicken before, but I just love the way that ground pork crisps up in the hot oil, and of course, it has a touch more flavor than either of the previously mentioned proteins. 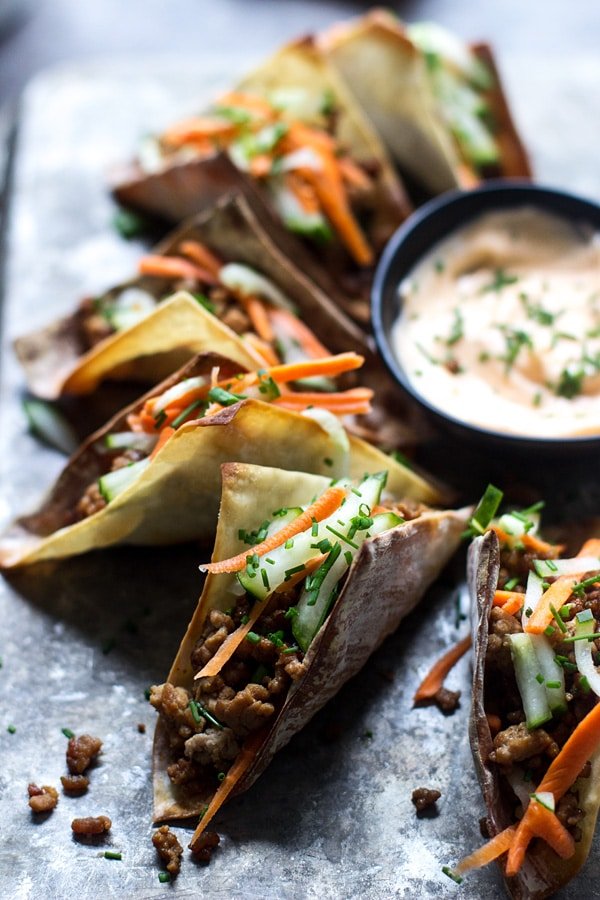 The pickled veggies are sort of cheater version, doused in rice vinegar and a little bit of sugar; they really only have a slightly acidic, sweet taste to them instead of being fully pickled. If you happen to have the time to think ahead, you could quick pickle them by heating the rice vinegar and sugar up and then letting the mixture soak for an hour or so before assembly, but it’s not necessary, in my opinion.

The “sauce” if you will is just a combination of low-fat mayo, spicy sirracha, sesame oil and just a touch of rice vinegar – another “cheater” version as the typical sauce is usually made up with spicy chili oil, if you’ve got that on hand (I doubt you do), go for it, but sirracha works great in a pinch, and I know you’ve got that in your fridge.

Assembly is simple. A little bit of mayo gets spread on the bottom of the “taco” shell, a generous spoonful of the pork filling get layered on top, followed by the pickled veggies and then a sprinkle of green onion (or chives). A traditional banh mi included spicy jalapeno as well, so if you like a kick, you can sprinkle that on, I didn’t have it on hand at the time so I skipped it, and all was just as well.

Of course these are perfect as a party app, but Kev and I just had them as a side to this sweet and sour chicken the other night and it was the perfect departure from the typical egg roll or crab rangoon side. 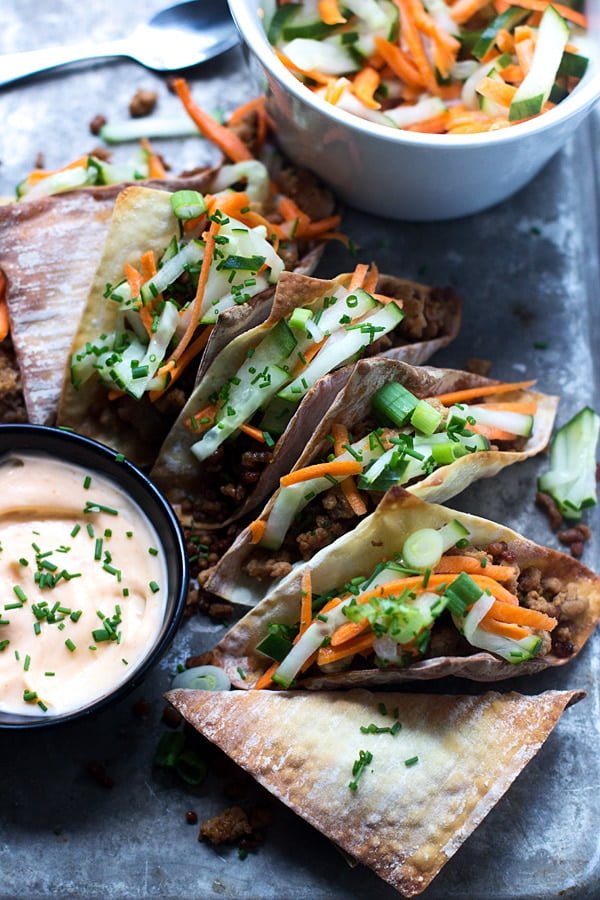