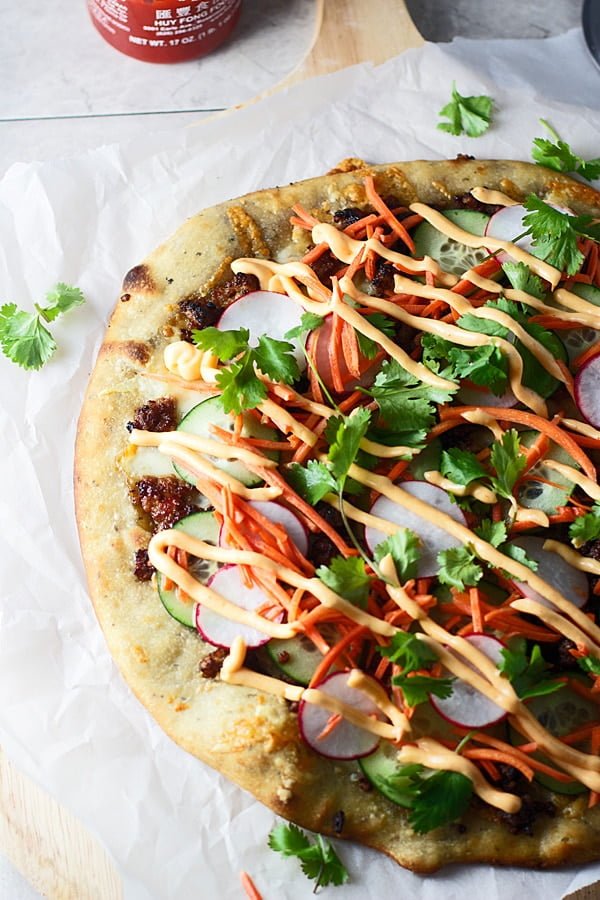 One of my favorite pastimes is to see just how many dishes I can turn into a pizza.

The possibilities are endless, so I don’t think I’ll have a hard time achieving hundreds of combinations in the years to come. I just need to remember to pace myself; although, I do have to mention, a blog devoted entirely to dishes turned into pizzas sounds like a brilliant business idea to me. (Note to self.) And I digress.

Gone are the days when the only choice of pie was cheese, pepperoni, the elusive anchovy or any of your other run-of-the-mill toppings. These days, you’re only limited to your own – or a restaurant’s – creativity. You want your favorite breakfast turned into a pizza worthy of breakfast, lunch or dinner?? Easy. Feeling like a cheeseburger, but don’t feel like pulling the grill out? No big deal. Want to shave $100 worth of freshly grated truffles on top of a crispy crust, gooey fontina cheese and crisp prosciutto? Done. (By the way, I need to try THAT pizza.) 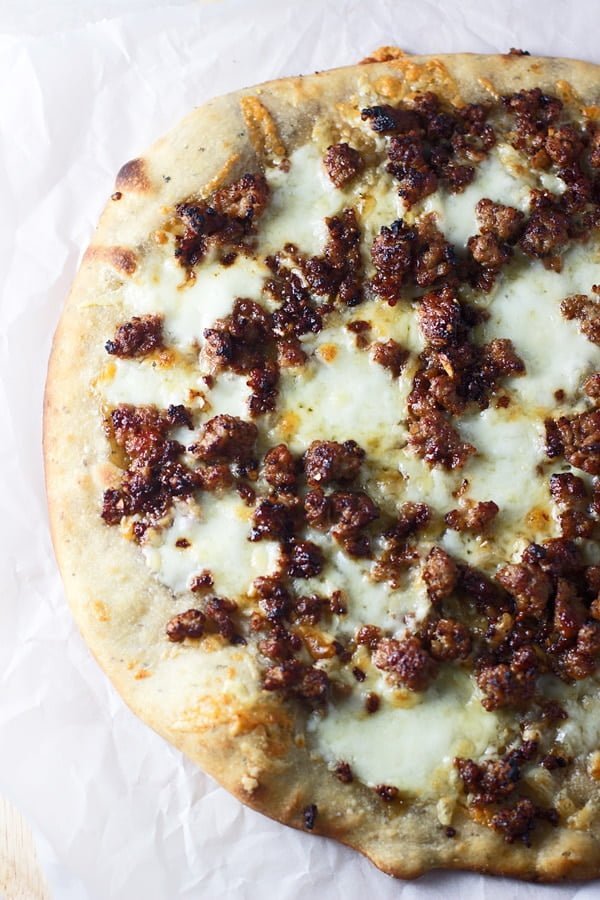 This week’s installment of turn whatever-your-craving-into-a-pizza, takes one of my newly found favorite sandwiches – the bahn mi and turns it into an irresistibly delicious mouthful of chewy dough, crispy ground pork and copious amounts of pickled vegetables. Oh, and cheese of course.

I first tried a bahn mi sandwich at a tiny restaurant down the street from my house. I’d heard rumblings of how tasty they are, and had even seen it pop up on a few menus around town, but I’d never really been intrigued enough to actually order it. The only thing that convinced me to order it from this particular menu, was the blackened cauliflower mash offered up as a side. So basically I ordered the sandwich with no intention for it to be the focus of my meal…plus it was a vegetarian variation, which I wasn’t too thrilled with.

Fast forward to the meal delivery; the cauliflower mashed potato hybrid was – as expected – phenomenal, but imagine my surprise when I bit into the bahn mi sandwich, and was, for lack of a better word, dumbfounded by how much I loved this sandwich. The crusty, yet soft bread enveloped around a tempura sweet potato topped with the most sweet, sour, spicy and delicious pickled vegetables. A drizzle of spicy sauce and loads of cilantro sent my taste buds in an official tizzy. Everything I love in one bite, and pure sandwich perfection. I’ve had a few variations since that inaugural sandwich, but I have to say, there’s just something about your first love – sandwich love that is. 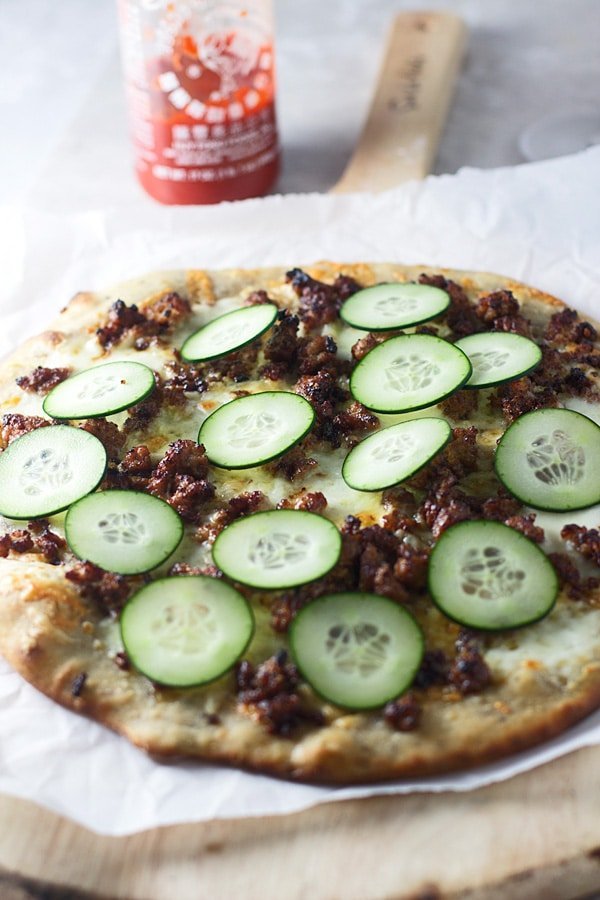 I would have preferred to keep this pizza vegetarian, as it’s how I know and love bahn mi (even though I know that’s totally untraditional and probably blasphemous to bahn mi purists), but the hubby is a pizza traditionalist and I try to pick my battles when serving him up anything other than pepperoni, meat lovers or supreme pies. So meat it was. And what a good battle that was to pick.

Before assembly happens on the pizza, a handful of shredded carrot and radish (daikon is traditional, but my store didn’t have it) is tossed in a quick pickling liquid of rice vinegar and sugar, and left to pickle while you assemble the rest of your ingredients and the pizza cooks. 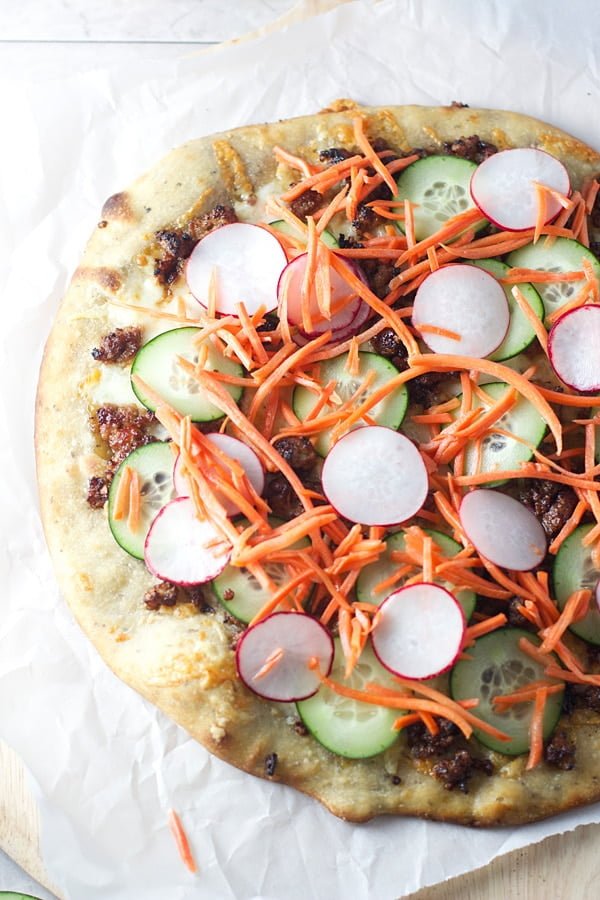 The base of the pizza begins with your favorite pizza dough, I was in the midst of having a mental breakdown trying to get things in order for our upcoming trip, so my favorite pizza dough consisted of Trader Joe’s store-bought dough, a close second to making the real stuff from scratch. A slather of sesame is the only ingredient needed for the “sauce.” (We’re piling so many toppings on here, the last thing we need is a heavy sauce.)

Next, shredded cheese. And I say cheese without the actual name of the cheese, because I basically just used what was left in our fridge, which happened to be an interesting assortment of mozzarella, fontina, truffled fontina and a smidge of sharp white cheddar. Clearly, as you can tell by my smorgasbord of cheese, I don’t like to waste good ingredients. I’m going to recommend that you use a rather mild, easy melting cheese like mozzarella or fontina. 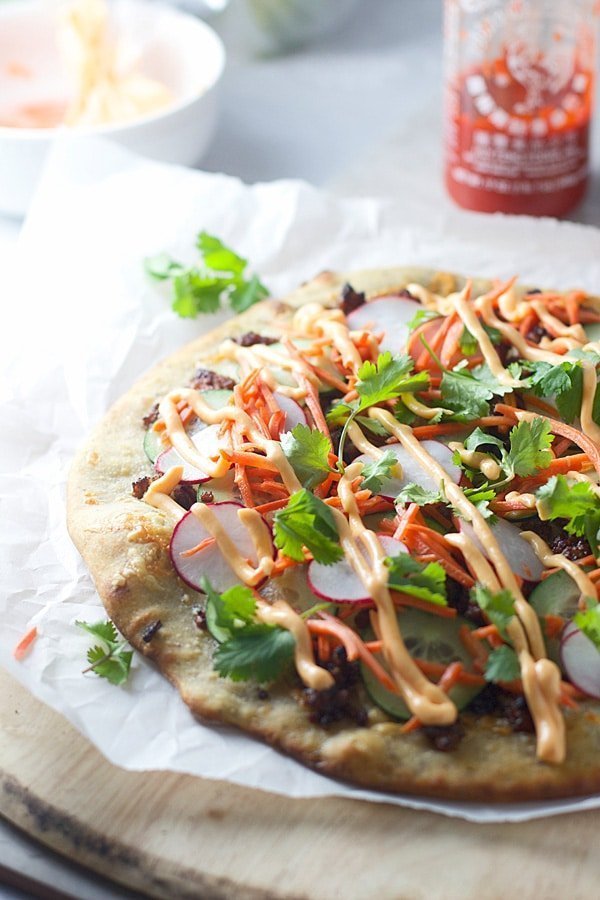 Now, for the meat. In a little bit of olive oil and sesame, I browned up about ½ pound of ground pork, and when I say “browned,” I mean it; you want the edges to get nice and crispy. It takes a little while, but this is the only portion of the pizza making process that requires a touch of patience. Once you’ve reached that crispy point, the meat is hit with a touch of hoisin sauce, soy sauce, fish sauce and sirracha for spice.

The meat and cheese are sprinkled evenly over the sesame oil coated crust, and the whole thing is shimmied on into a screaming hot (500 degree) oven until the crust is crisp and the cheese is melted and slightly golden.

Of course I’d be remiss not to mention that having a pizza stone, in my opinion, is essential for at-home pizza baking. And said pizza stone must heat in the oven for at least 20 minutes before baking. Trust me. Your crust will be crisp, but chewy with an ever-so subtle char on the edge. Your cheese will melt, and later, brown perfectly. 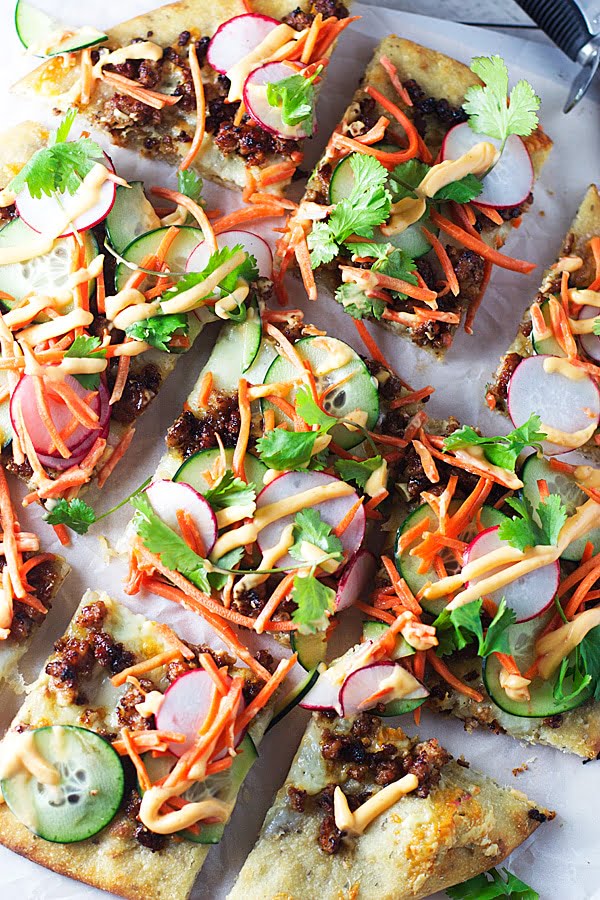 While the pizza is in the oven, a quick, spicy sauce is thrown together with a little bit of mayo, sirracha, sesame oil and rice vinegar. Try not to dip pickled veggies in sauce. Addictive. OR! Make extra pickled veggies and sauce, and dip while pizza cooks.

Once the pizza is out of the oven, the pickled veggies are artfully scattered over the bubbling cheese, copious amounts of fresh cilantro is sprinkled across and the whole pie is drizzled with the spicy sirracha mayo.

Easily in my top five favorite pizzas of all time.

Although I think I say that about ALL the pizzas. 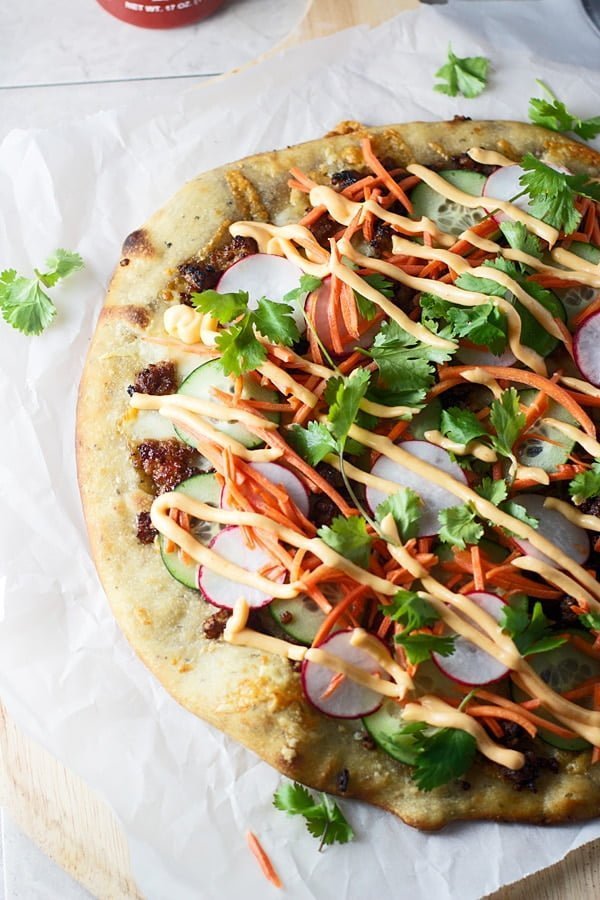