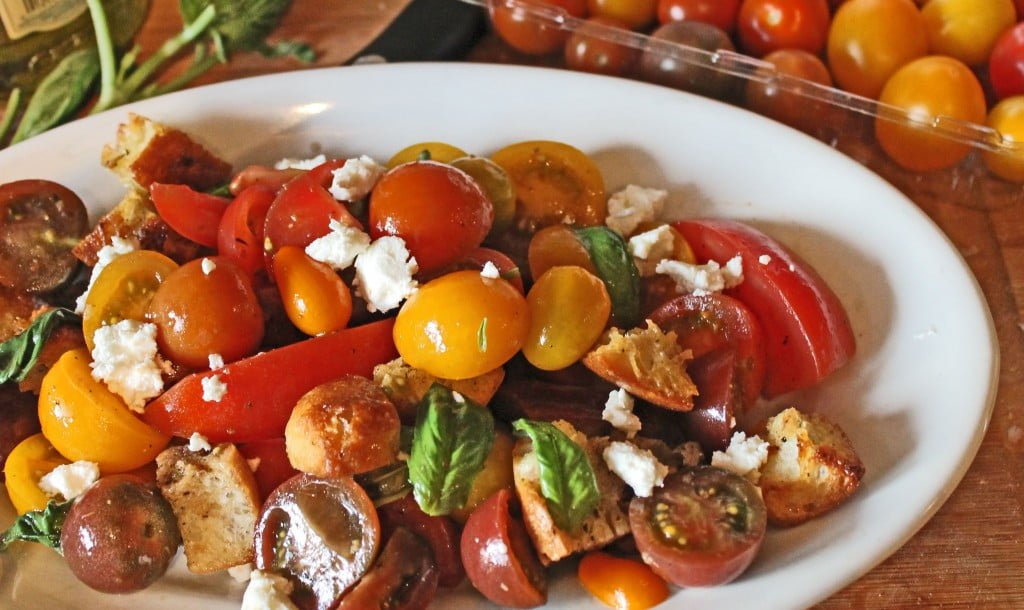 It’s incredibly important to me to have a few recipes in my back pocket that are very budget friendly.  After all, I’m a 25 year old, only out of college for four years and let’s just say I’m not rolling in the dough.  I usually still buy expensive ingredients like Parmigiano-Reggiano, good olive oil, and the occasional good cut of meat but some weeks I just can’t stomach to spend more than $50 or so at the grocery store.

Take this week for example: my car payment was due (only three more left!), my car insurance was due, and my rather large credit card bill was also due. All common expenses, but I also just so happened to have added another large expense in there by smashing into my third car in the last two years.  This time it was a brand new Mercedes; last time it was a brand new Lexus. I’m not sure why, but apparently I’m just drawn to hitting expensive luxury cars.    Needless to say it’s going to a tight couple of weeks ahead of me and I need to be frugal in my grocery shopping expenditures.

This recipe is not only a great way to cut back and prepare something inexpensive but it also utilizes the amazing tomatoes that this time of year brings us.  Panzanella was originally what peasants from Florence ate in the summer time in the 16th century.  Nothing went to waste back then and bread and tomatoes were some of the most accessible ingredients to those that were underprivileged.

Classically, day old bread was soaked in liquid, squeezed, and then combined with tomatoes and a little olive oil and vinegar. Personally, I don’t like to completely submerge the bread in liquid; it just turns into a big soggy mess that isn’t very appealing to the eye and in my opinion, not to the taste buds either.  Instead I like to toast the day old bread cubes to get them a little crispier, toss all of the ingredients together, and then let the whole mixture set for 20 minutes. The bread softens up a little bit but still has that crispy texture that is so delicious with the tomatoes and basil.

If I have some type of cheese already in my fridge like mozzarella or goat cheese (as I did in this instance) then I’ll add it in, if you don’t no biggie, it will be just as tasty. 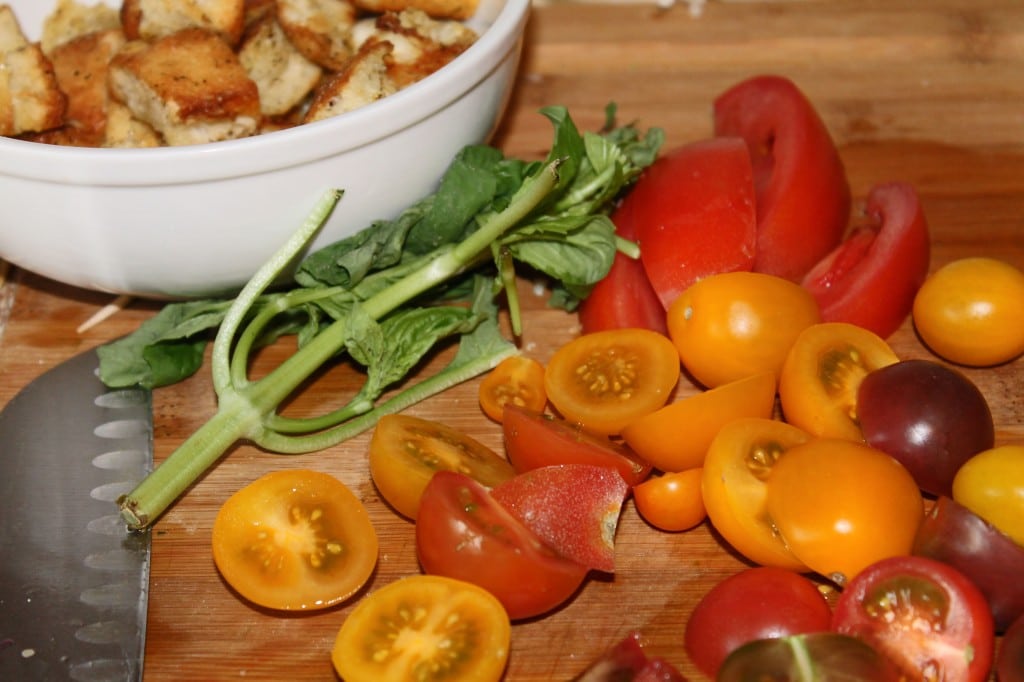 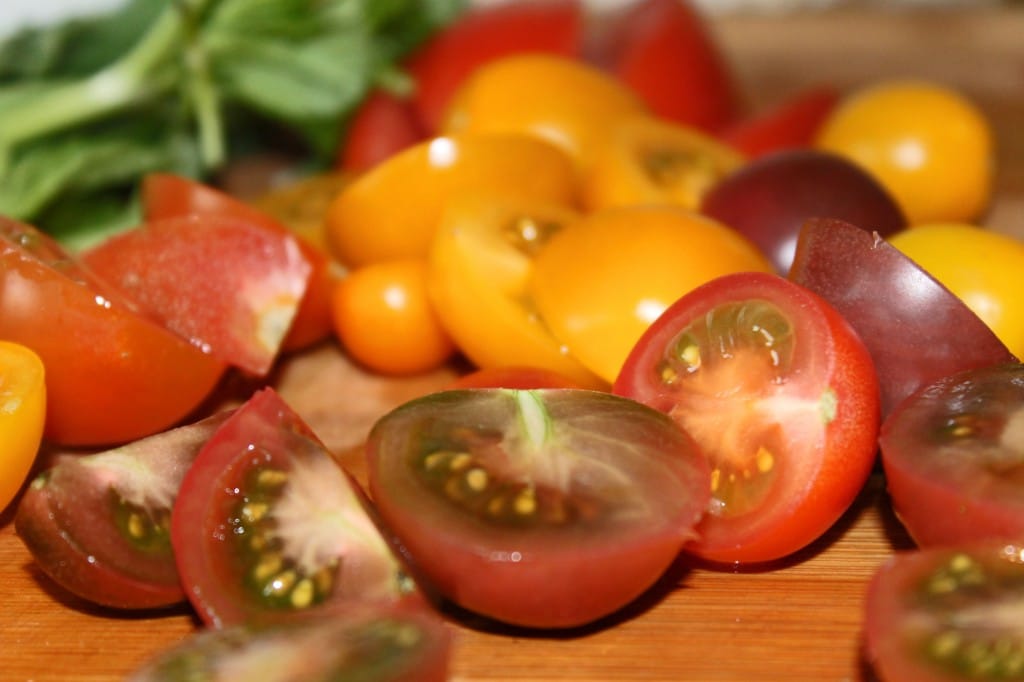 Aren’t these heirloom tomatoes gorgeous?  Use all different colors and sizes of tomatoes; the more variety there is the prettier the salad is going to look! Some of my favorite tomatoes are the craziest looking things that that don’t look the most appealing but taste ah-mazing.  Chop them up any which-way you choose, symmetry is not the goal. Fresh basil is also great in this, again if you don’t have it in your backyard or don’t want to buy it fresh from the store, leave it out.  The star here is the bread and the tomatoes. 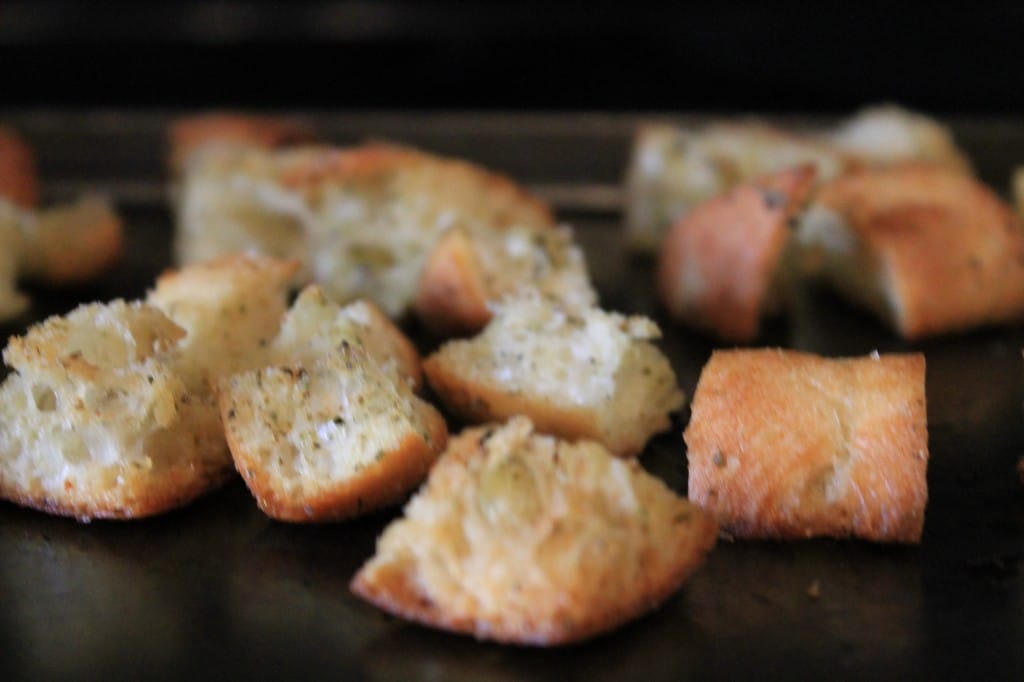 Toss day old bread with a little bit of olive oil, salt, and pepper. Bake in a 350 degree oven for about ten minutes.  Just enough time to crisp up a bit. 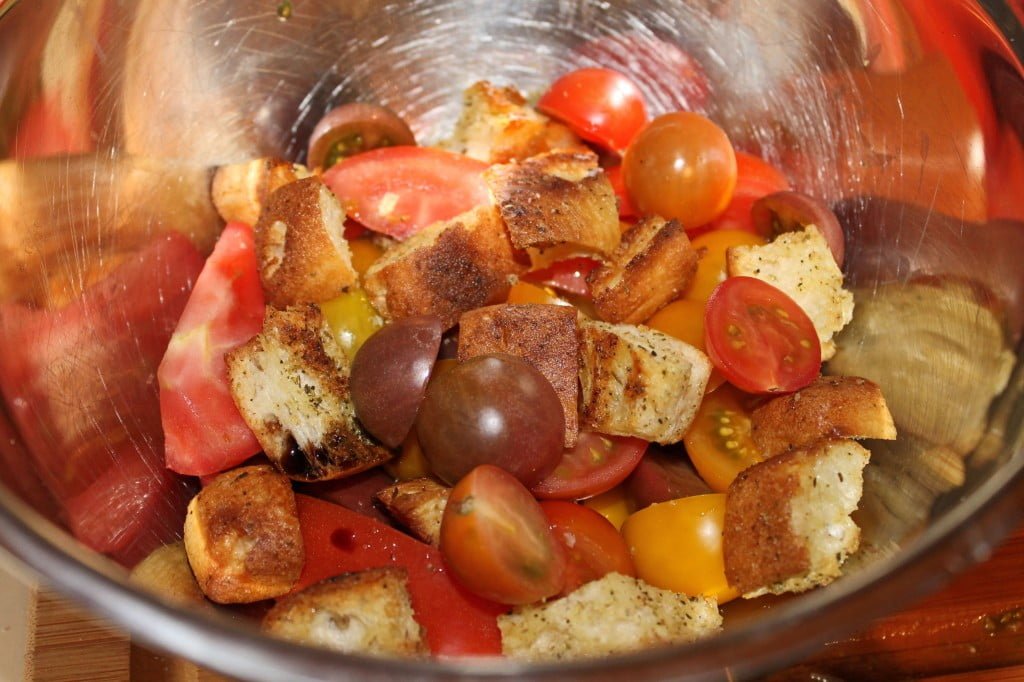 Toss tomatoes and bread together with a little bit of extra virgin olive oil and balsamic vinegar. Let set for about 20 minutes or until the bread starts to soften up. Season with salt and pepper.

Transfer tomatoes and bread to a large serving platter.  If you have any fresh herbs or cheese, sprinkle over the top of the salad. Serve with a nice crisp glass of white wine! Ahh, the perfect summer combo…

Toss bread cubes with ½ tablespoon olive oil, season with a little bit of salt and pepper.  Bake at 350 degrees for ten minutes. Toss bread and tomatoes  in a large bowl with oil and vinegar. Season with salt and pepper. Let set for 20-25 minutes or until the bread has started to soften. Spread artfully onto a large platter. Top with basil and crumbles of goat cheese. 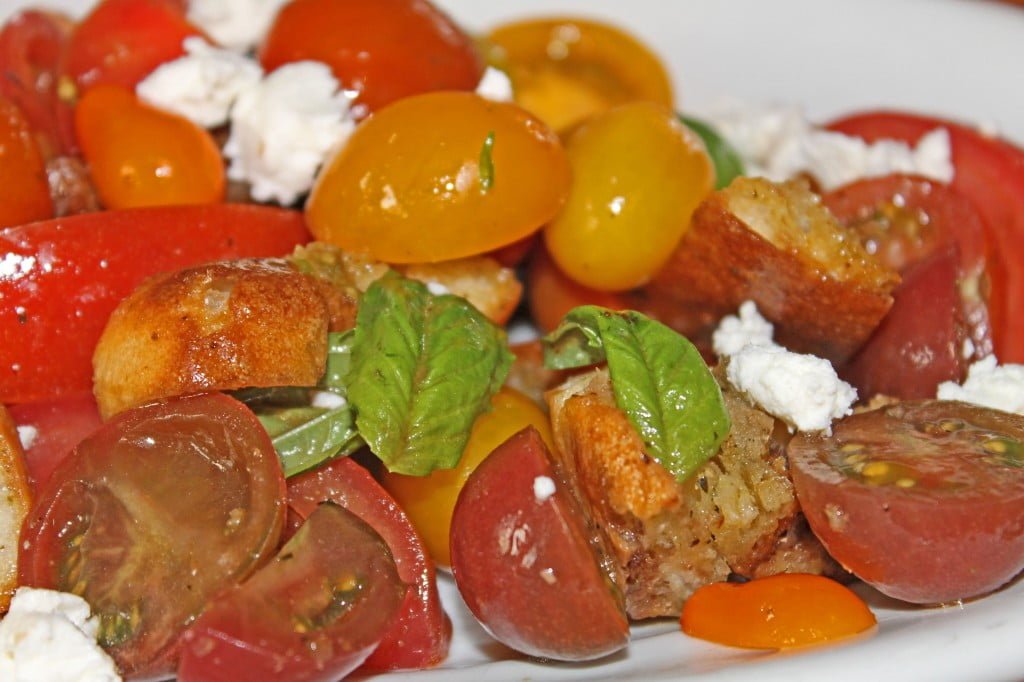