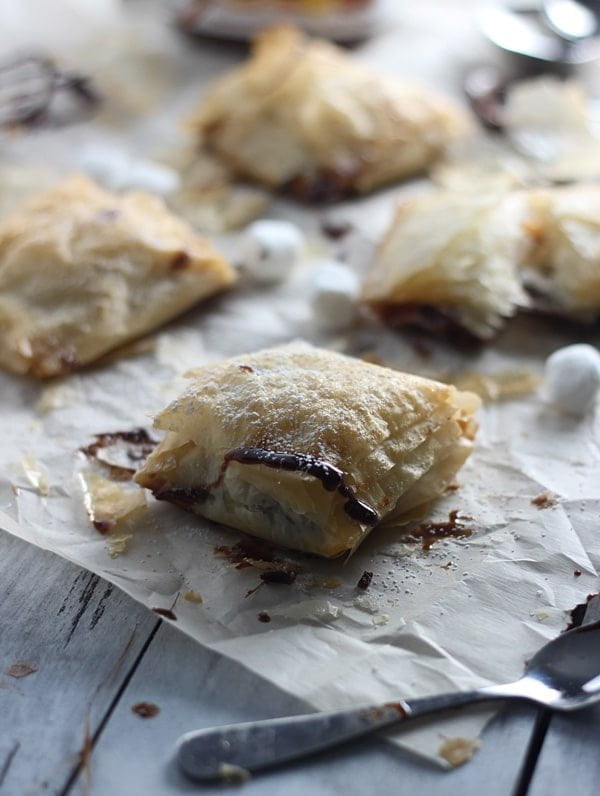 I don’t do desserts here often, and when I do, they aren’t overly complicated or include a gazillion of intricate steps. It’s not because I don’t like baking, because I do, it’s just when given the choice of sweet or savory, I’m going with savory nine times out of ten.

Because I am more of a savory gal, my dessert choices are all over the board. Some days the only thing I crave is a piece of dark chocolate, other days I can’t stop thinking about a warm apple crisp with obscene amounts of crumbly topping. And call me crazy, but some days, I don’t want dessert at all and would much rather have another serving of pasta or glass of red wine. 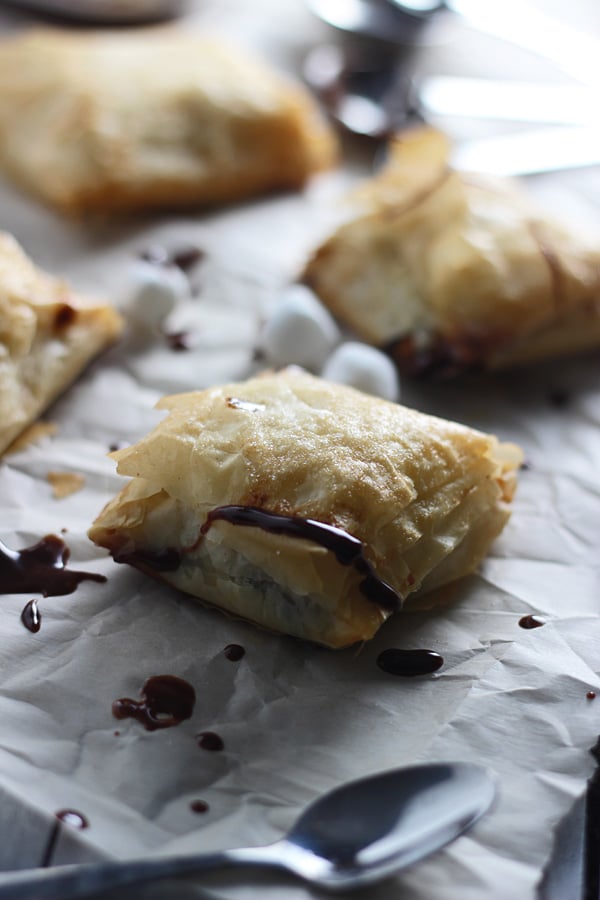 Every once in a while I’ll get inspired and come up with a brilliant dessert idea like this Pumpkin Coconut Cream Pie with Chocolate Ganache or this Brown Butter Pear Upside Down Cake, but most of the time my sweet thoughts manifest themselves in desserts like these phyllo pockets. Simple, but not boring. Sweet, but not overly sweet.

Loaded with Nutella, peanut butter and marshmallows, these are kind of a grown up take on a s’more, but better. The peanut butter and nutella get all melty and warm inside the crisp phyllo dough, and the marshmallows ooze out the sides just touch, creating that toasted marshmallow flavor we all love. Even though I had originally planned for these to be semi mess-free, do not eat one over your couch, or your floor or your dog, little phyllo pieces will go flying everywhere and you’ll have a big fat paper-like mess on your hand – although it’ll be worth it. I would also classify these as easy, but that comes with a disclosure – phyllo dough can be tricky to handle. The key is to move quickly so the dough doesn’t dry out, and only use what you need, keep the rest of the dough covered until it’s ready to be used.. Now, I don’t usually have too much trouble with it, but this time I was a little bit impatient when it came time for the phyllo to defrost, which apparently takes five hours – ummm yeah I don’t have that kind of time. Long story short, I tried to speed up the process, it failed and ended up causing the sheets to stick together and break into pieces. Luckily, broken phyllo is easily fixed with a little bit of melted butter. But for your sanity, may I suggest you plan ahead and pull the dough out in plenty of time to defrost naturally.

You can make these two different ways, the first way is to wrap everything up similar to a spanakopita. Familiar? If not, that’s ok, what you do is place the filling at the bottom of your phyllo strips, fold over to form a triangle and keep folding until it’s completely wrapped up. Not sure if you can picture that or not, so here’s a good tutorial. The second method is to take two strips of dough and place the filling in the middle of two strips of dough and fold over the sides. I’d actually lean towards the spanakopita route, because the filling stays put a little bit better than it does in the method I have shown here.

I served them with a sprinkle of powdered sugar and simple dipping sauce of more Nutella mixed with a little milk to loosen it up. 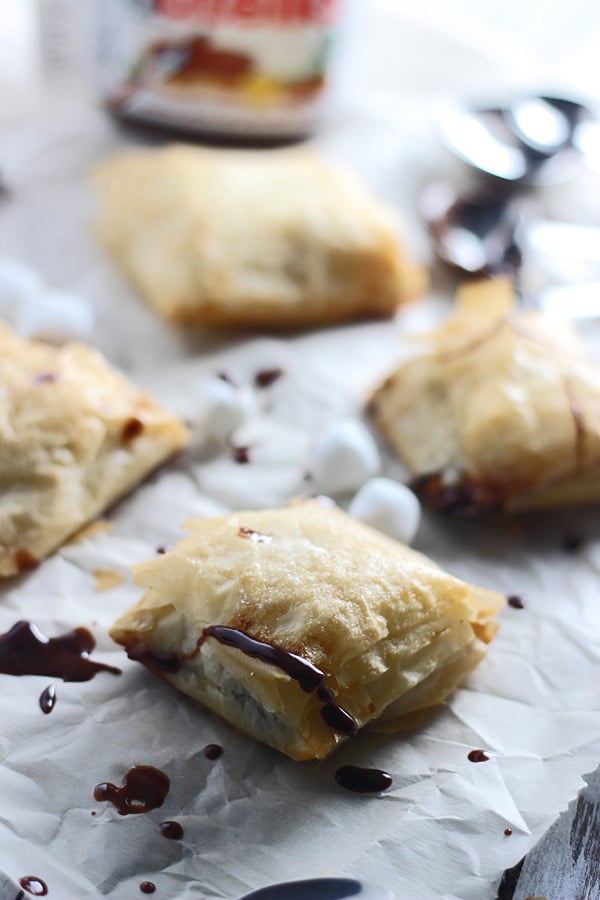 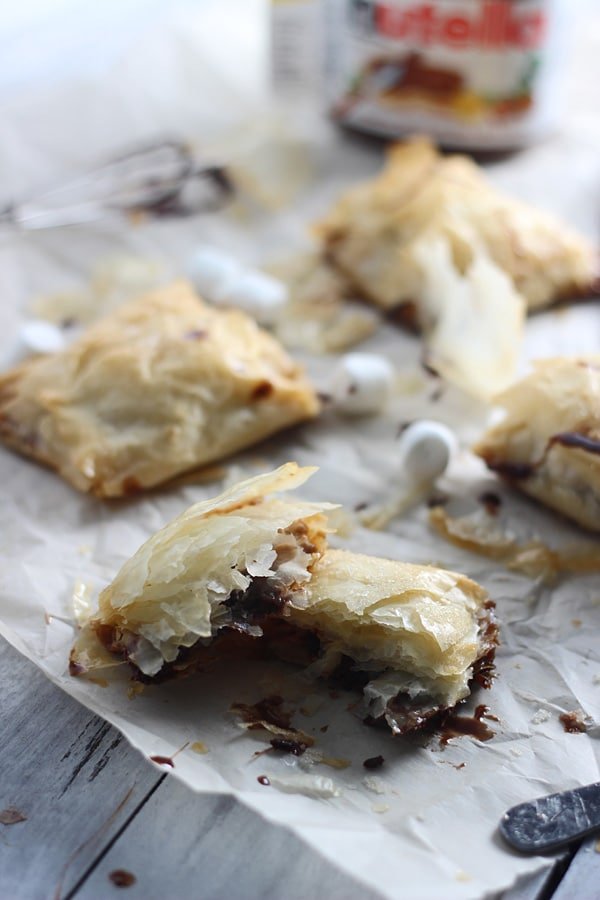 Now this is my kind of dessert. 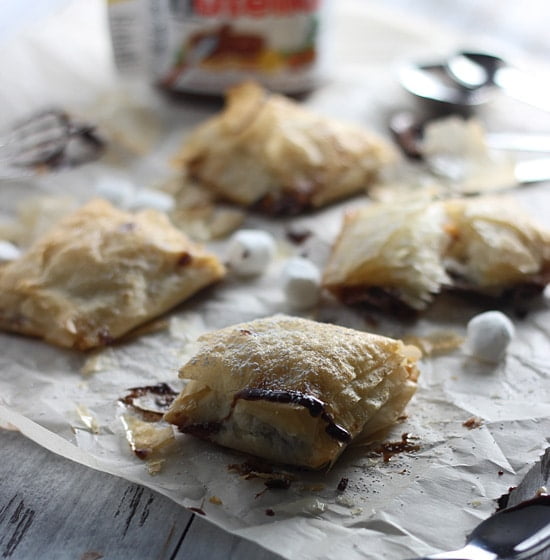