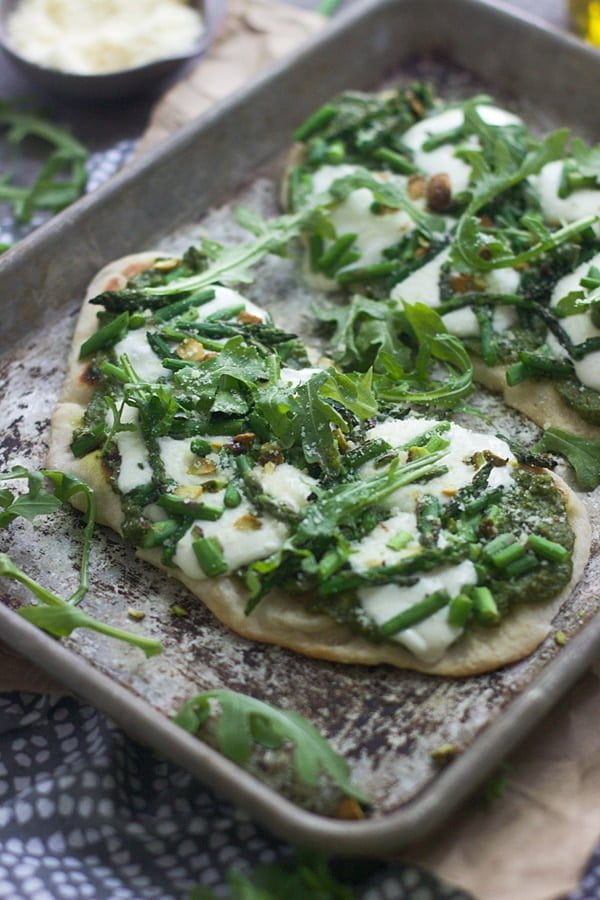 If you had any doubts that a new season has emerged, just take a look through my last handful of posts. Most have some sort of seasonal ingredient, and none of them lack a bright, colorful makeup reminiscent of spring and summer.

I think the plethora of seasonal recipe ideas that flow through my brain is my favorite part about the warmer months – aside from the fact that they’re, well, warmer. Because I do have so many ideas coming to me, I try to not be overly redundant in my recipe developing, but sometimes, a recipe is good enough to post about twice. 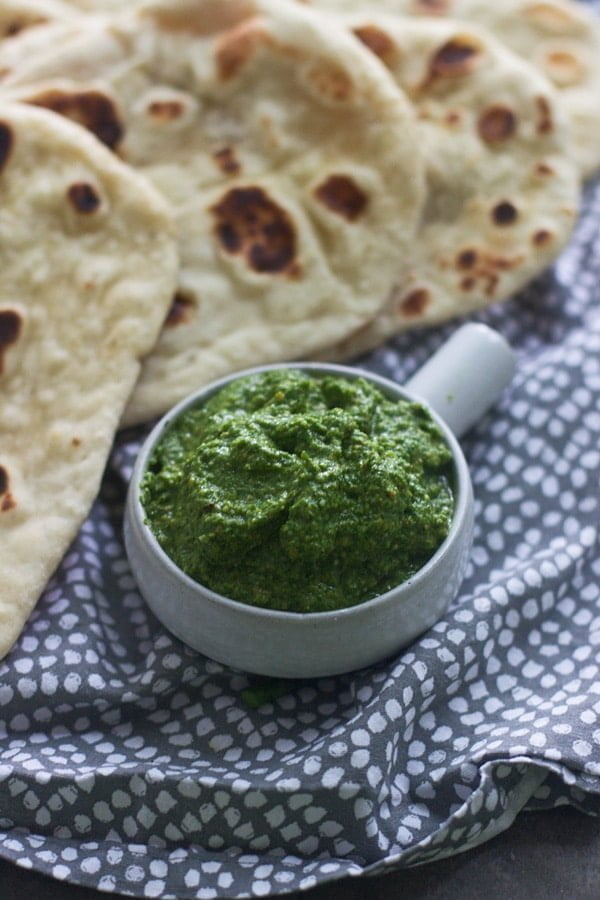 Ever since I made this pistachio and arugula pesto roasted chicken, I haven’t been able to get the pesto piece out of my head. At the time, I was content consuming it solely with the chicken, but after taste testing it several dozen times, I knew it needed to find its place in a few other dishes.Of course, it would and did go perfectly with some orrecchiette pasta, which Kevin had for lunch one day, but it also makes the perfect base for a spring-inspired flatbread pizza. 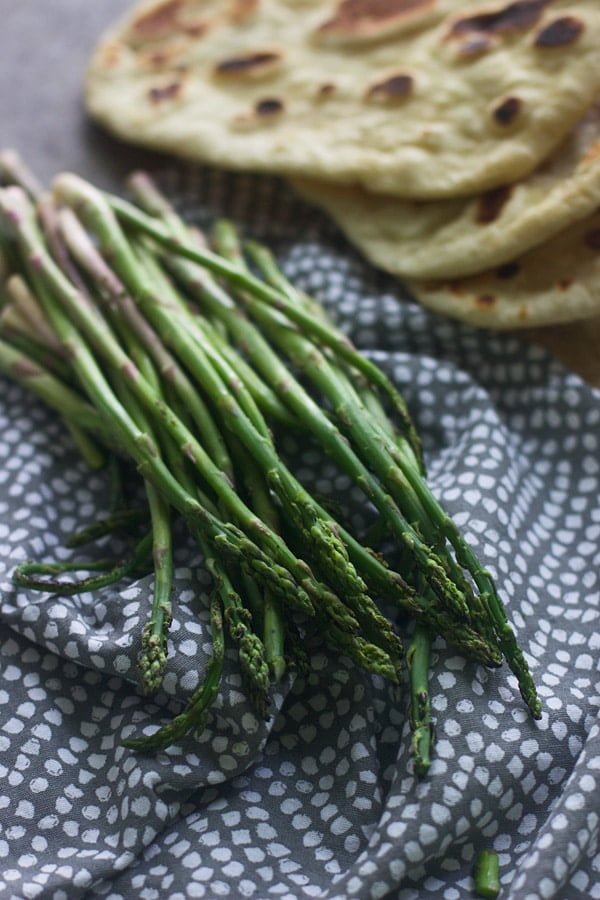 These days I find myself gravitating more towards pestos that don’t have any basil in them, which started out partly because basil wasn’t in season yet and also because the amount of basil, pesto requires, means you have to fork over an arm and a leg in cash to make a decent-sized batch. I’ve found that cheaper alternatives like arugula, spinach or even kale are just as good, if not better than the original, so that’s what I’ve been using instead.

In this version, I used about four cups of packed, peppery arugula, a small handful of roasted pistachios, garlic, plenty of parmesan cheese, lemon juice, zest, salt, and twice as much olive oil as the recipe for the roast chicken calls for. The reason I used more olive oil in this version is because I wanted a more loose sauce that closely resembled the consistency of a classic pizza sauce, instead of the more dense texture needed to stuff under the chicken’s skin. 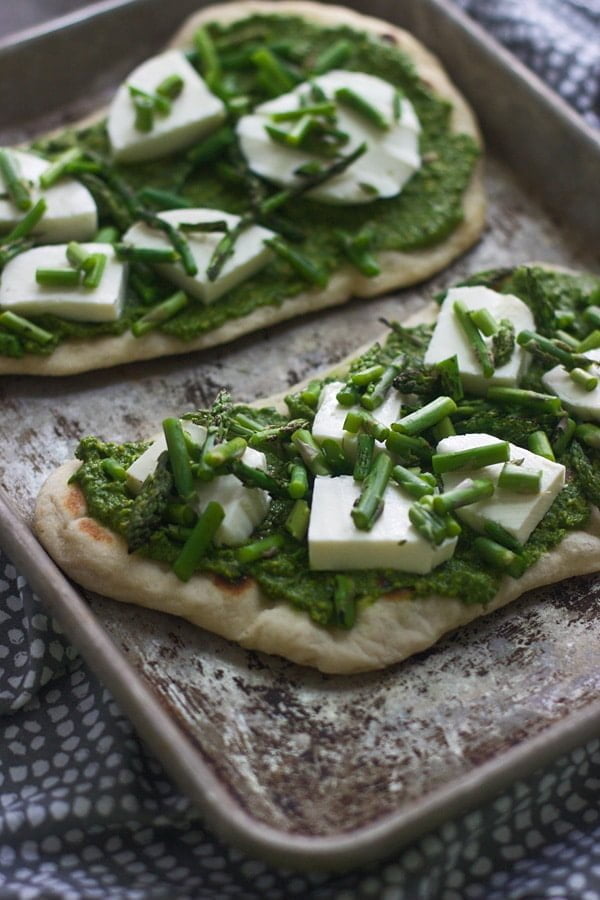 Because I never make things easy on myself and can’t bring myself to spend nine dollars on two pieces of flatbread, I whipped up a batch of Half Baked Harvest’s homemade naan bread, an extra step I highly recommend. This was the first time I’ve made my own naan, and I’ve now vowed to do it every time for here on out, because its infinitely better than anything you can find pre-made at the store. The dough not only comes together in under 15 minutes, but it cooks up so easily in a cast-iron skillet. The end result is a crispy on the outside, soft on the inside, melt-in-your-mouth piece of flatbread that really doesn’t even need anything to go with it, although I’ll pile the ingredients on anyways.

Once the bread is all cooked, I slathered the homemade pesto across the top of each one, dotted it with fresh mozzarella cheese, and then sprinkled chopped asparagus on top. Each flatbread is drizzled with a little bit of olive oil, salt, and pepper, and popped into the oven just until the cheese is melted.

When the hot flatbread comes out of the oven, it’s sprinkled with chopped pistachios and fresh arugula, and then covered in grated parmesan cheese. 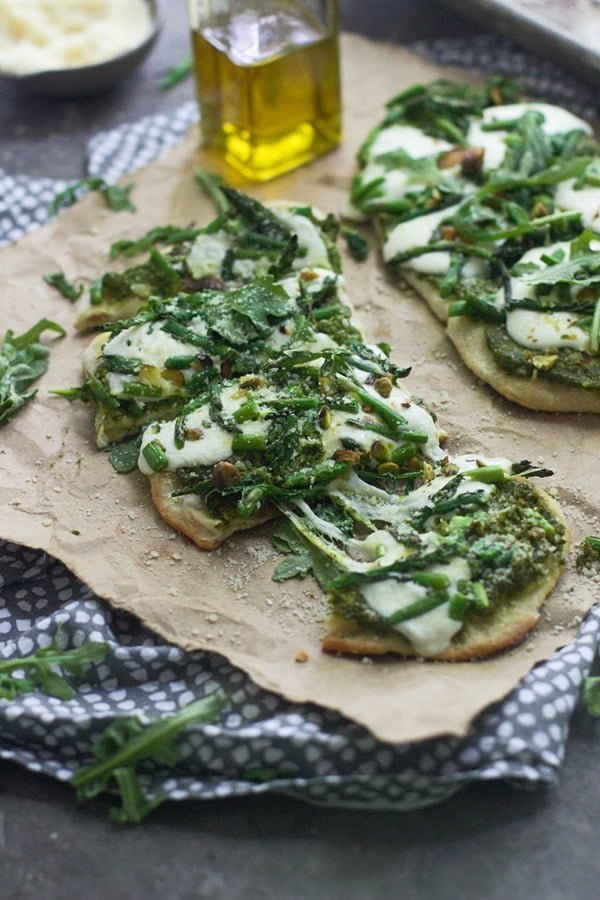