Our version of Spicy Dan Dan Noodles retain all the tangy sesame-chili flavor, saucy ground meat topping, and chewy noodles we adore in the classic version but we use more pantry staples and give it a boost in the health department. By swapping out ground pork for ground chicken and  whole-wheat noodles instead of white-flour Chinese noodles, we make this a dish you don’t have to feel guilty enjoying. Let’s eat all the Spicy Dan Dan Noodles, but let’s make them healthier, more pantry-friendly, and a little bit easier to make. Deal?

Our version of Spicy Dan Dan Noodles include aldente whole-wheat noodles coated in a make-your-eyes-teary sesame/chili sauce infused with hints of cinnamon, star anise, and warm cloves. We take the noodles and top them with an equally tear-inducing ground chicken mixture swimming in the same addictive sauce, but with an extra kick of garlic, ginger, and chili oil. It’s the perfect combination of spicy, tangy flavor, and texture.

Which brings us to….What are Dan Dan Noodles??

We hit on most of the key points of spicy dan dan noodles above, but if you’re not familiar, they’re a classic Chinese Sichuan noodle dish. Typically it’s made with ground pork coated in a spicy chili and sesame-infused sauce that’s served over chewy white noodles. Most versions use Sichuan peppercorns or peppers, Ya Cai (pickled mustard greens), and five spice powder which can be very difficult to find in most grocery stores.

This means, that in trying to replicate my favorite Dan Dan Noodle dish at home, I came to a sad conclusion: They’re just not that practical to make. However, with a few pantry swap outs, I think we’ve managed to stay true to the classic flavor and preparation of Spicy Dan Dan Noodles, and there’s no doubt the flavor in general, out-of-this-world delicious.

(For an even quicker and easier Asian noodle option, check out our Simple Chili Garlic Noodles and our 5-Ingredient Peanut Noodles.) 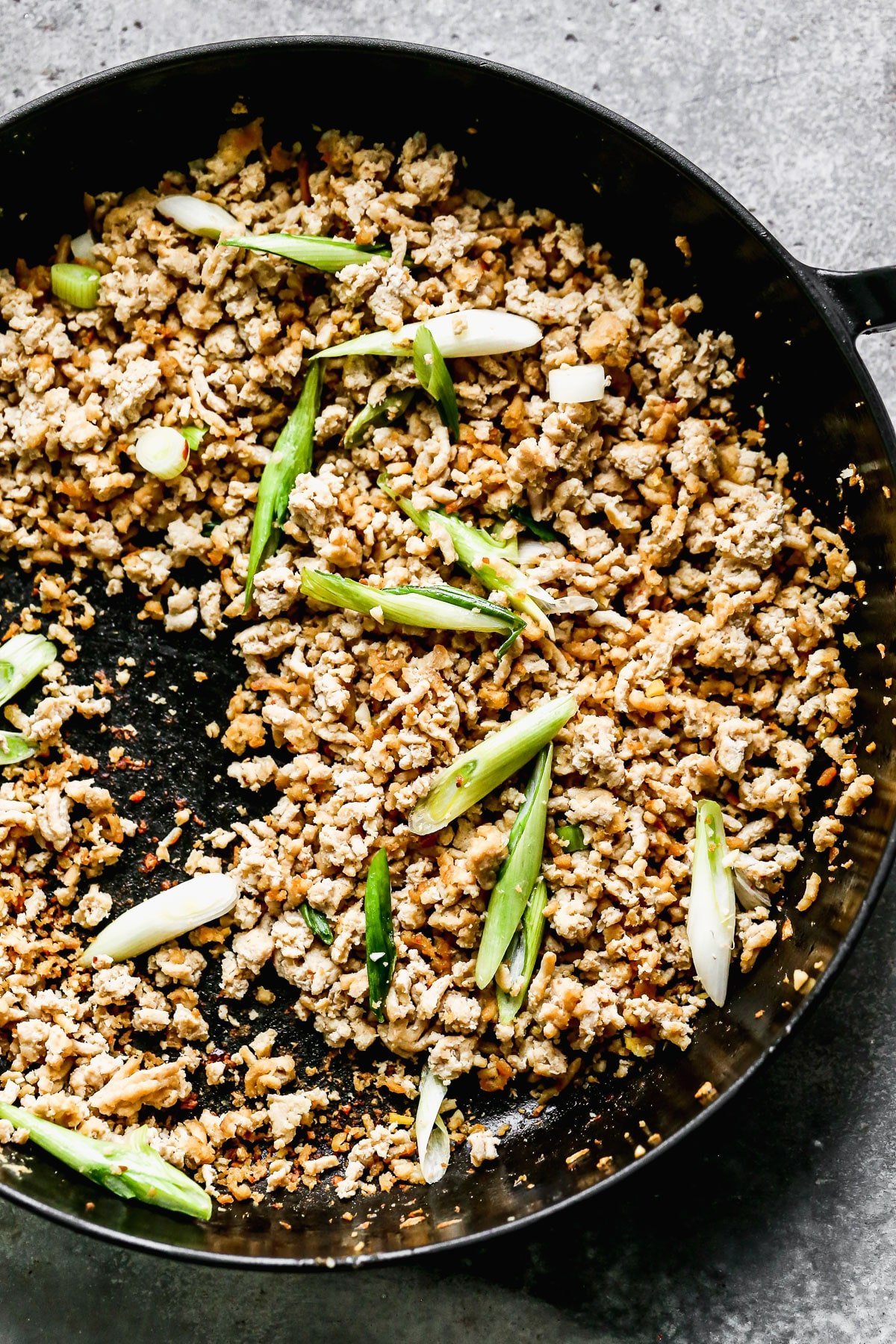 We split the sauce up into two different bowls – the dan dan noodle sauce for the meat and the dan dan noodle sauce for the noodles. In many Dan Dan Noodle recipes you’ll see across the internet and restaurants, the noodles are left plain, and the saucy meat is spooned on top. I’m a more is more kind of person, so we toss the sauce with the meat AND the noodles. Both versions of the sauce have the same ingredients, so we will list them that way below, although they are in different quantities for each purpose. Here’s what you’ll need:

Hoisin. Hoisin is something I always have on hand, since it’s a one-stop-shop kind of ingredient that adds infinite flavor and complexity to Asian dishes. It’s a compound of many ingredients, including fermented soy beans, soy sauce, sesame oil, garlic, chili, honey, and chili peppers. It has a lovely balance between sweet, salty, and almost sour which is perfect in our spicy dan dan noodles.

Soy Sauce. As we’ve mentioned before, we have switched from soy sauce lover to full-time tamari enthusiast. Tamari is slightly less salty than soy sauce, and I find it has a more well-rounded savory flavor as well. Of course, any kind of soy sauce will work.

Tahini. This ingredient was a surprise to me when I first started making Dan Dan Noodles. It’s subtle, so it’s not something I initially picked out when trying it out at various restaurants, but now it makes sense. It adds a lovely undertone of sesame and nuttiness to the dan dan sauce, and now I want to throw a little bit into all of my favorite Asian noodle dishes.

Honey. With every spicy/acidic dish, you need a little bit of sweetness to balance it out. Nine out of ten times, I’ll go with honey and today is no exception.

Spices. In a true dan dan noodle recipe, you’ll usually find Chinese Five Spice Powder and Sichuan Peppercorns. Because these are ingredients that aren’t commonly found at your average grocery store, I swapped them out for some things you won’t have trouble finding. Star anise is a lovely spice that adds a little bit of sweetness along with an very subtle anise flavor. We also use a cinnamon stick and a few whole cloves for a bit of warmth.

Ingredients you way have to find elsewhere

Chili paste. The particular chili paste we used is the one ingredient you may have trouble finding in your average supermarket. For this recipe, we use Doubanjiang (the same ingredient we use in our Ants Climbing a Tree), a Chinese chili paste made out of fermented broad beans. It’s extremely spicy, in the best way possible, and has the most amazing tang from the fermentation process. If you don’t have access to it, you could easily swap out  Gochujang (I get mine at Whole Foods) or the even more accessible, Sambal Oelek.

Dry sherry. Traditionally you’ll want to use an authentic Chinese cooking wine in place of dry sherry, but in a pinch, this works. The sherry really adds to the overall flavor of the finished product, so I don’t recommend skipping it. Because it’s a cooking wine, the best quality stuff is found at a liquor store, but you can also find non-alcoholic ones at the grocery store as well. 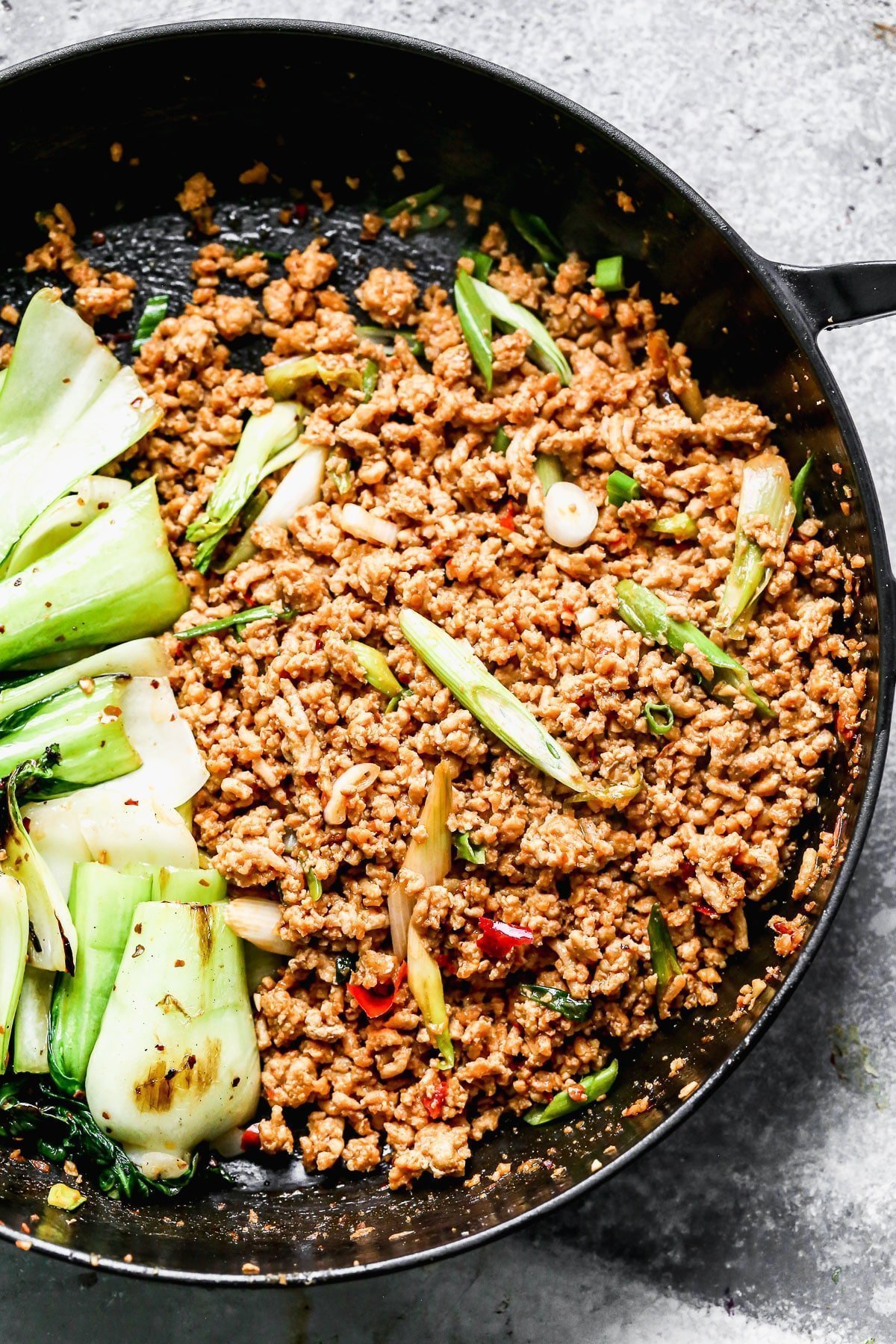 Ingredients in everything else

Noodles. Dan Dan noodles typically use a white medium-sized Chinese noodle, but today since we are sticking with pantry items, and also trying to stay relatively healthy, we are going with a whole-wheat spaghetti. The circumference of the noodle is about the same size, but we’re also going to get a lot of fiber and nutrition as well.

Chili oil. Instead of using a neutral oil such as canola to cook with, we add more flavor and spice with chili oil. I can usually find this pretty easily at any grocery store. If you can’t find it, no big deal.

Garlic + ginger. No surprise here, both the noodles and the meat get started with aromatics of ginger and garlic.

Chicken. The first place to cut fat and calories is in the meat. Ground pork, which is traditionally used in classic Dan Dan Noodles, is not known for it’s figure-friendly attributes. We go with a more lean ground chicken, which I think is just as good.

Bok choy. I like to have a little bit of green or veggie with any Asian dish, but here I didn’t want anything to overshadow that saucy chicken, so we go with a simple stir-fried bok choy to pepper throughout the dish. 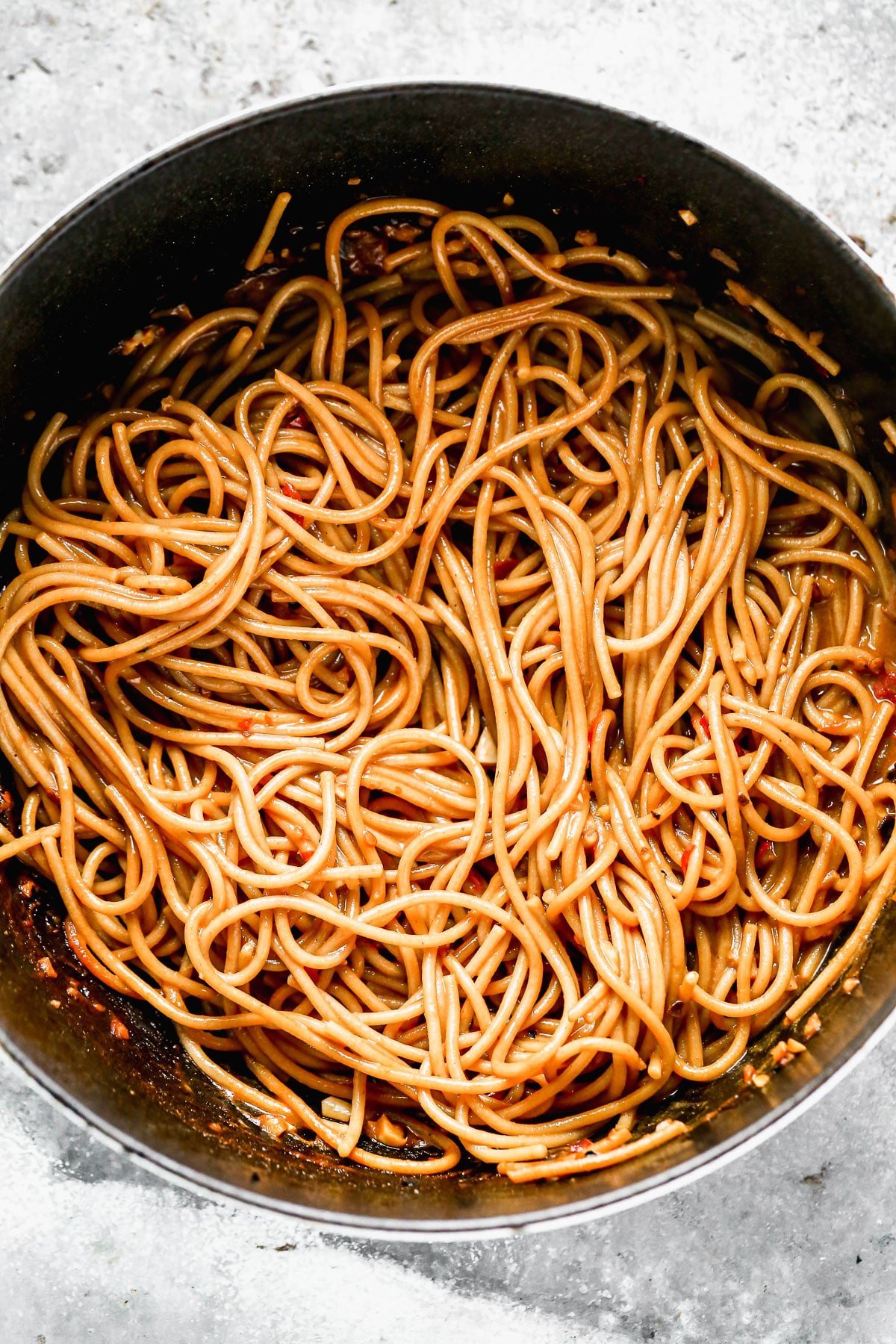 How to Make Dan Dan Noodles

While the ingredient list is admittedly long, the process is not. You will have to dirty up a few dishes, but the instructions are written to make it all very streamlined and quick moving.

Make the sauce. While the water comes to a boil for the noodles, add all the ingredients for the respective sauces into two different bowls. Whisk until combined.

Cook the noodles. Once the water comes to a boil, drop the noodles in the water to cook. Once they are aldente, drain and rinse under cold water. I know this seems counterintuitive to everything I’ve ever said about pasta, but in this case, I like to wash off the starch and stop the cooking process.

Saute aromatics. Heat some chili oil in a large skillet. Add the ginger and garlic. Saute for about a minute until fragrant and then add the chicken. It’s really important for the chicken to be in very small pieces, so use a wooden spoon to break it up as much as possible. When the chicken is fully cooked, our sauce goes in. Simmer until the noodles are ready.

Assemble. Transfer some noodles to a shallow bowl. Top with a generous amount of the ground chicken mixture. Arrange some bok choy around. Sprinkle with green onion. Enjoy. 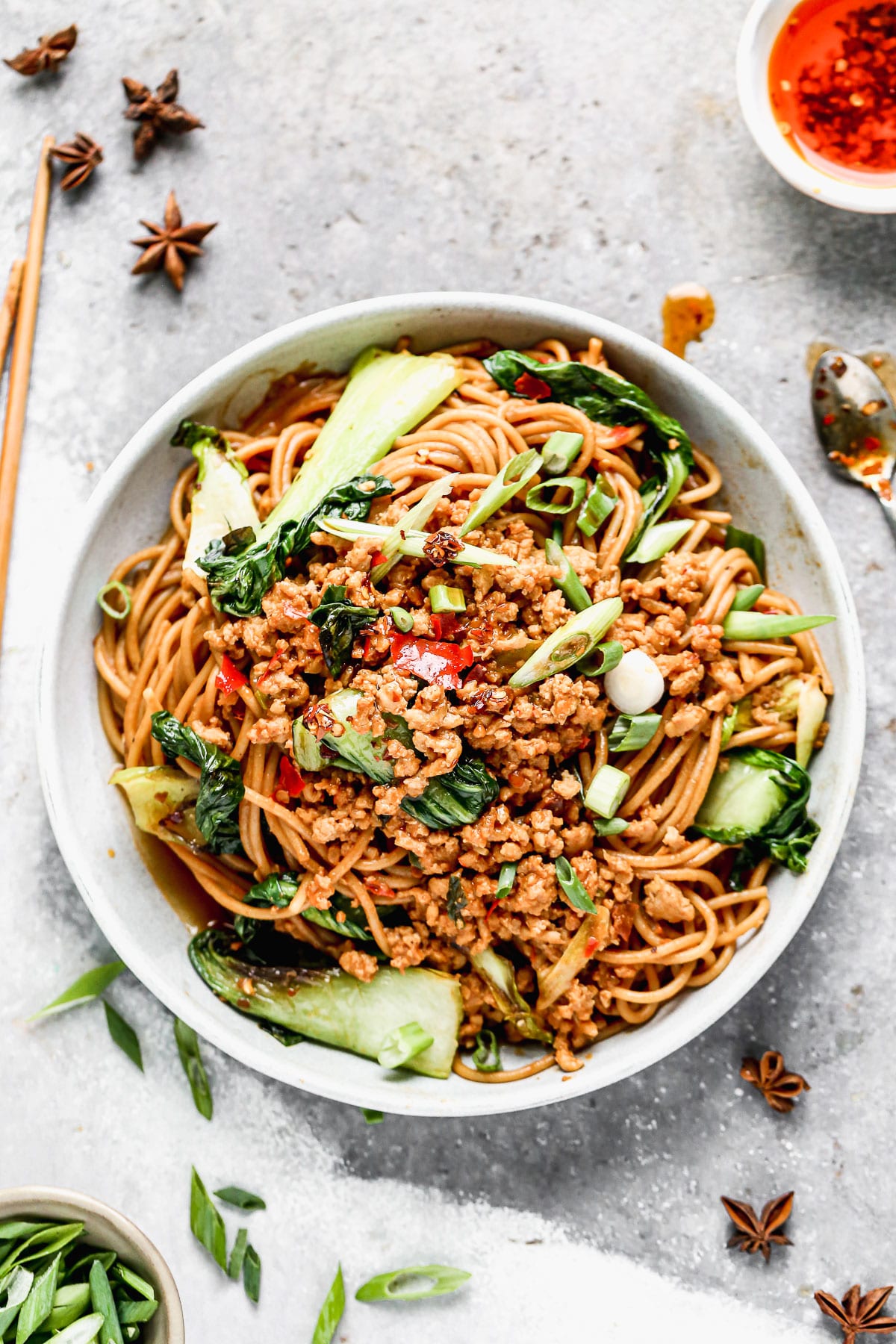 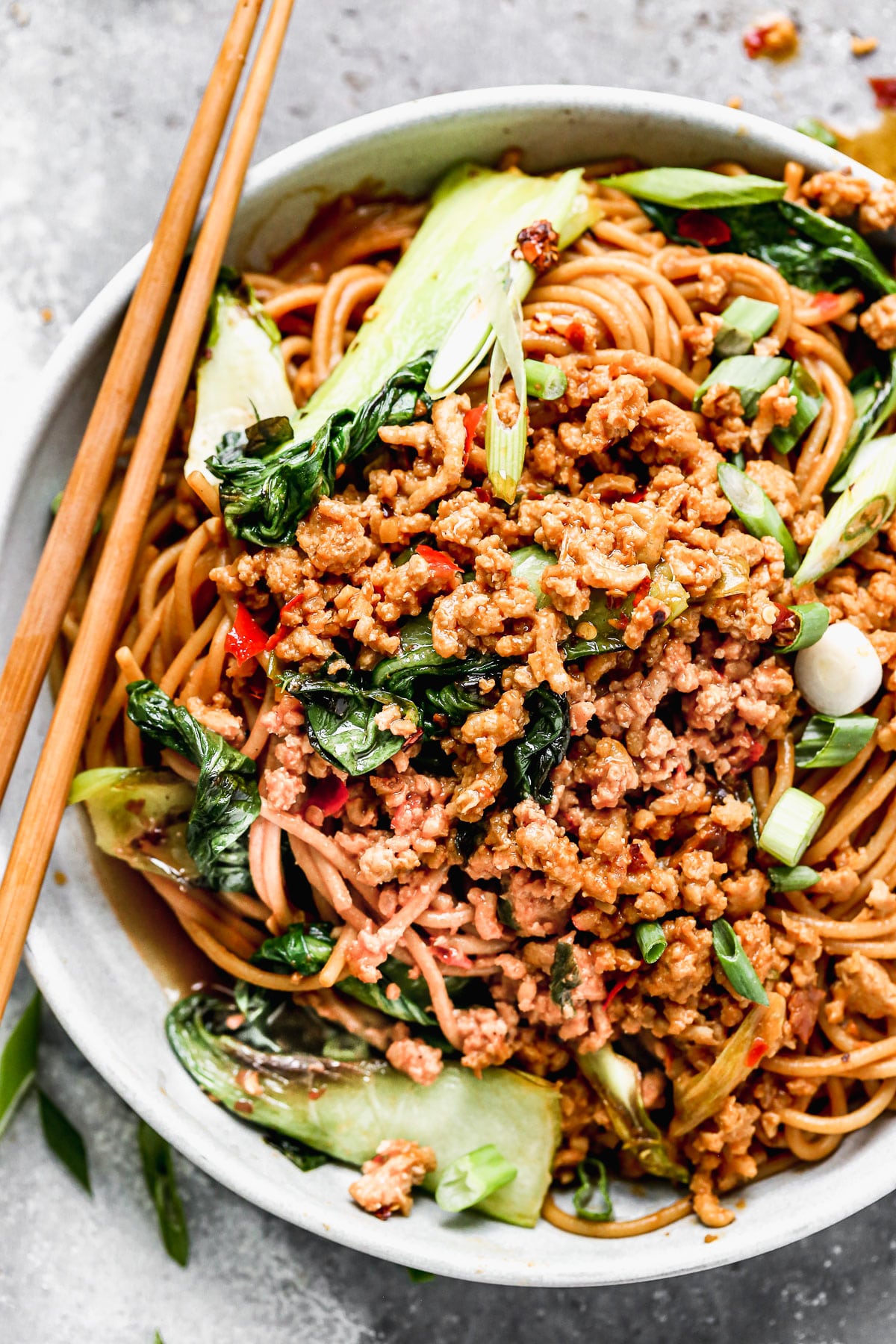