Wasabi Edamame Hummus is a spicy, refreshing take on classic hummus. Packed with hearty edamame, tahini, chickpeas, nutty sesame oil, plenty of garlic and of course, hot wasabi, this is not only healthy, but seriously addictive. 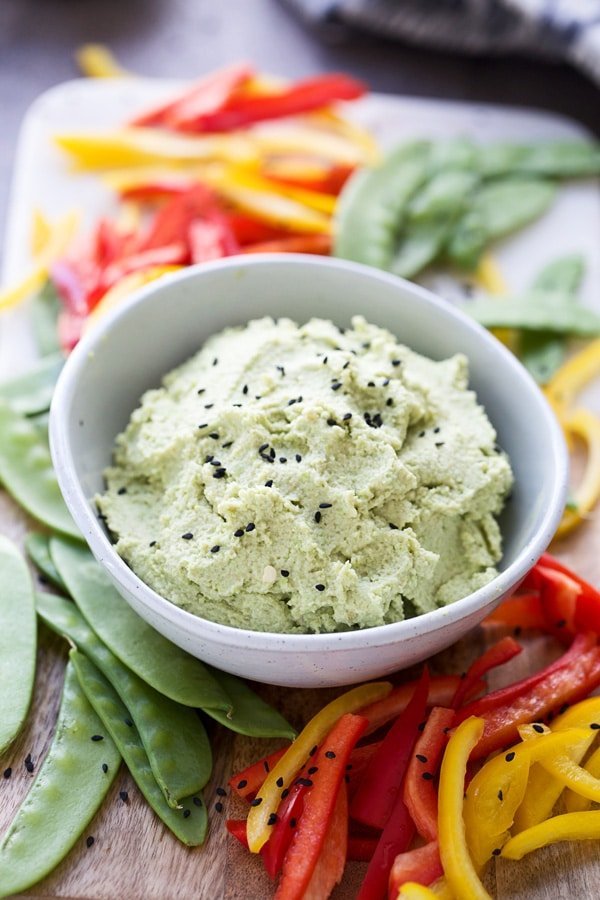 Welp, winter sickness has finally taken over our household. I was just gloating a few weeks ago on how we haven’t been sick yet, and just days later, karma came back around and gave me a fierce kick in the butt when both Teddy and I simultaneously came down with some serious upper respiratory crap. And then I got pinkeye. In both eyes. Oh, and did I mention I’m also in my ninth month of pregrancy?

Being sick and pregnant has me craving chicken noodle soup, hot tea and cough drops something fierce, but on a normal day when I’m just pregnant and not sick, the one thing I’ve been craving more than anything, and one thing that I can’t have is sushi. 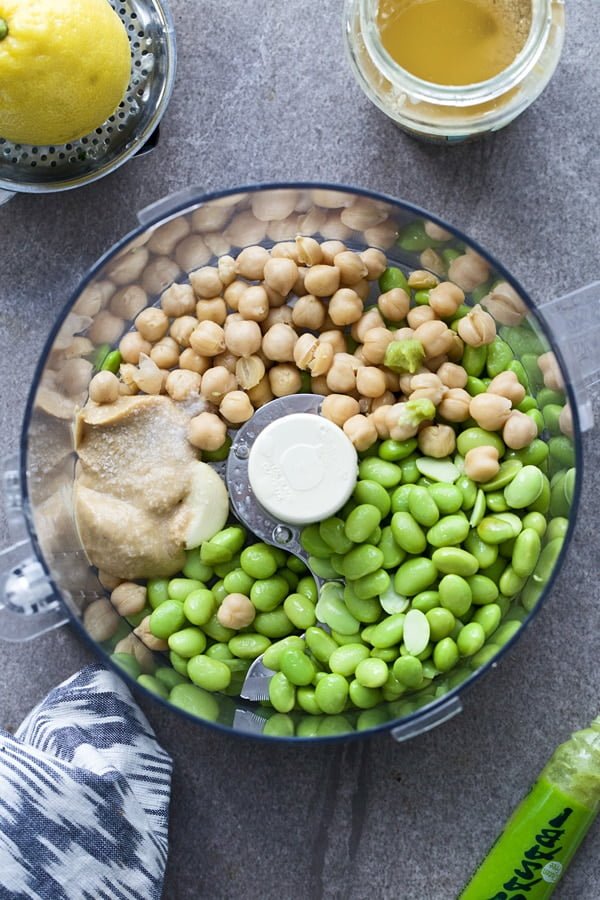 Surprisingly, sushi is really the only thing I miss, and since I normally gravitate towards raw sushi rolls, it didn’t even cross my mind to curb my craving with a few rolls that don’t have any raw fish or tuna in them at all. After a serious bout of a sushi hankering, I remembered that I’d actually really enjoyed a few vegetarian rolls I had with one of my blogger friends eons ago, so I hightailed it to the same restaurant and got to ordering.

Of course, there are plenty of rolls that have cooked fish (Las Vegas Roll, Shrimp Tempura, etc.) but the one that really stood out to me was a vegan roll full of tempura sweet potato, asparagus, sun-dried tomatoes and the most epic edamame hummus. So so good. I mean, when I’m not pregnant, I’m still going to order it.

The next time I went, I got the same roll in addition to a side of the edamame hummus on its own and then immediately vowed to recreate it at home – and here we are. 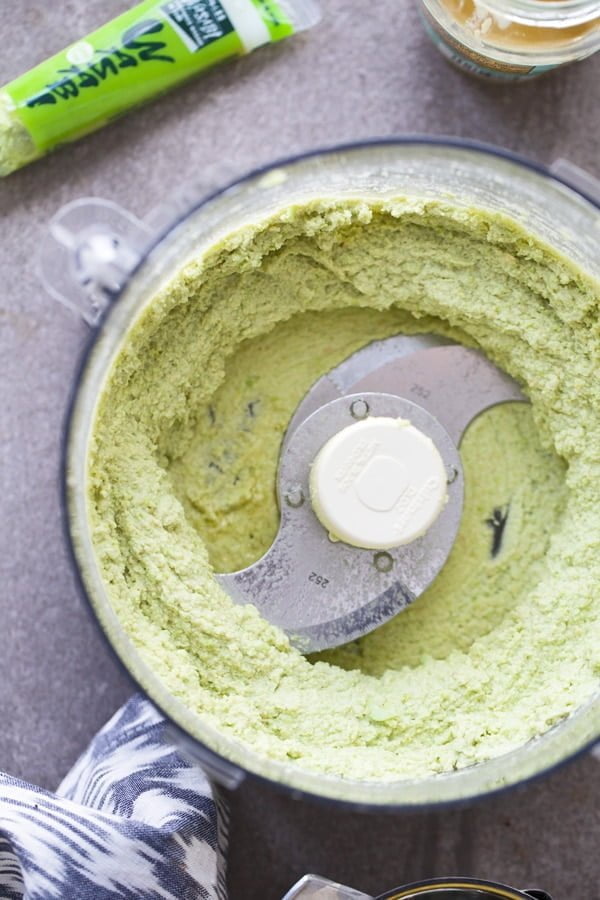 Like most versions of hummus, the base of this one is made with chickpeas and tahini, but the bulk of it is, as the name implies, edamame. In addition to those three ingredients, I also threw in some lemon juice for acid and sesame oil to compliment the tahini and to align with the Asian twist.

A single garlic clove, kosher salt and a touch of olive oil round the ingredients out.

Oh, and because I wanted a kick of spice, a scant teaspoon of wasabi paste is added in. I toyed around with just adding srirracha sauce, but I love the underlying spice and flavor wasabi has, so I just went with it. 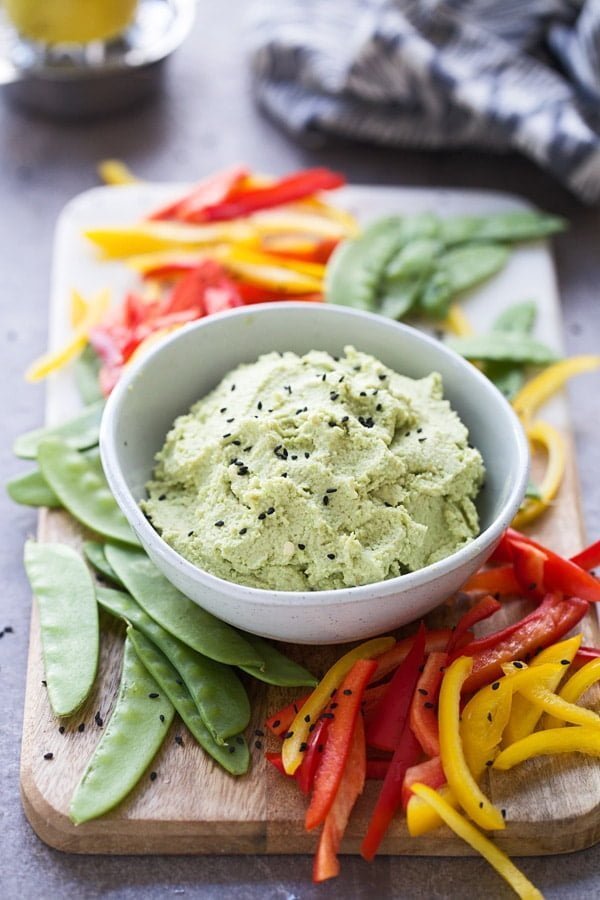 Just like your average hummus, this is SO easy to put together. Just throw all of the ingredients in the food processor except for the oils, puree it until smooth and then drizzle the sesame and olive oil in at the end.

Season to taste with salt and pepper, garnish with black sesame seeds and serve with your favorite crisp veggies. 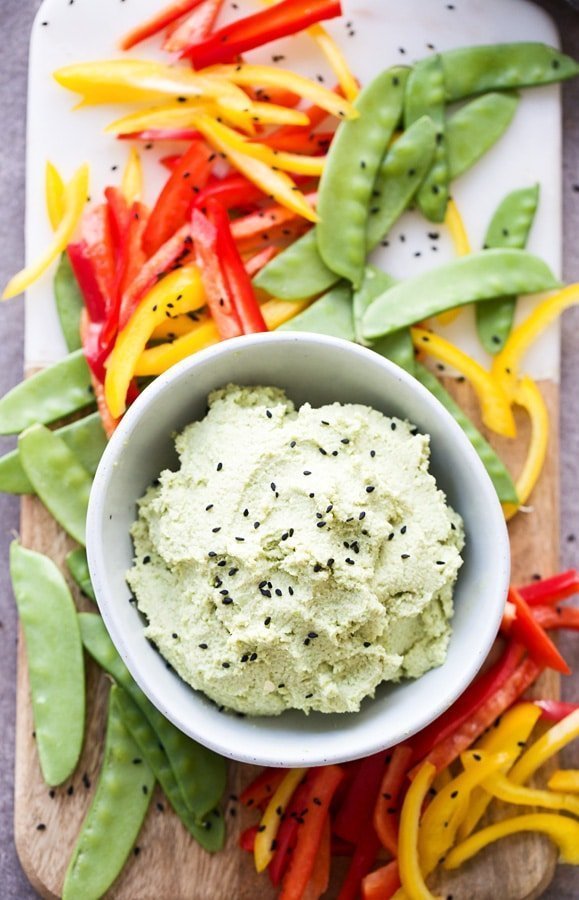 Print Rate Email
Wasabi Edamame Hummus is a spicy, healthy update on classic hummus! Instead of chickpeas, we use cream edamame, plenty of sesame oil, and wasabi paste for a kick of heat.
Prevent your screen from going dark
4 people