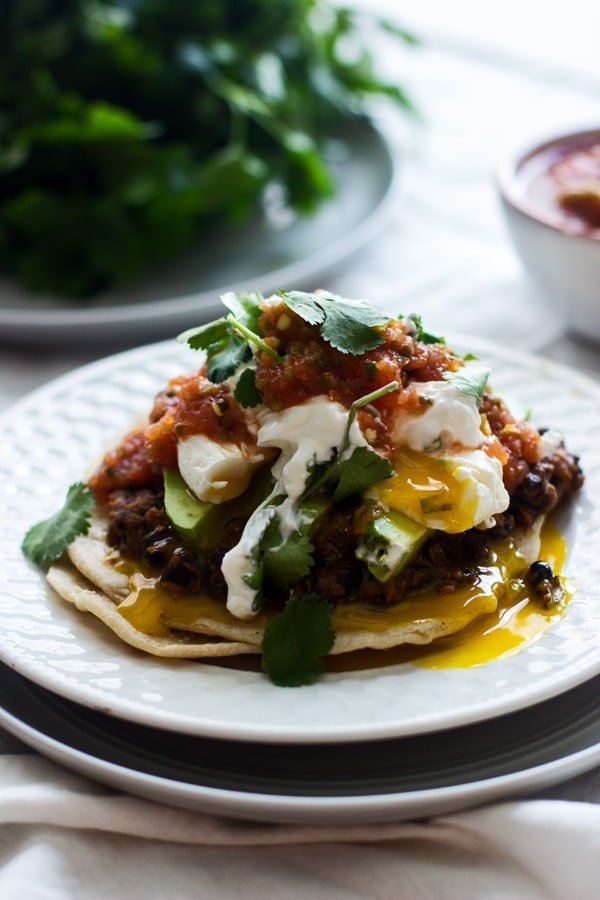 If there’s one meal I could never give up, it’s breakfast.

Not that I’d ever volunteer to give up any meal, it’s just when I wake up my stomach needs something of substance pretty much instantaneously. Otherwise I risk hunger pains so severe, they make me want to cry and throw up at the same time.

Since I’ve started working from home, my breakfasts are much more colorful than they used to be when I was rushing to get into the office and chronically late. Before I would hurriedly chuck a prepared oatmeal pack in my purse (I know, so bad) since I would rarely take the time to prepare something the night before – due in part to my busy schedule, but mostly attributable to my acute laziness. 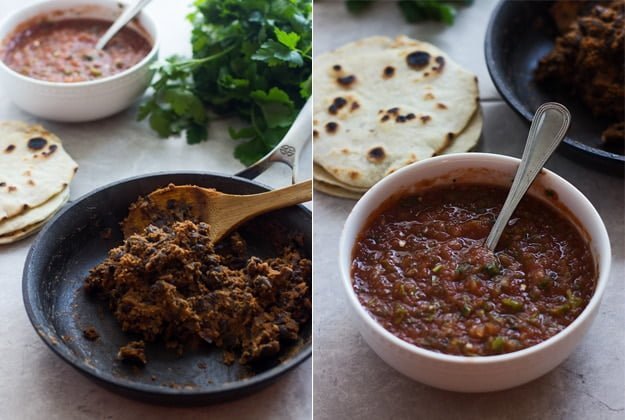 These days, I’ve found a sort of solace in the daily routine of preparing my breakfast from scratch and then nibbling on it while I check emails and peruse some other fellow bloggers’ websites. Most days something as simple as slow-cooked steel-cut oats with a little bit of sliced banana and honey will do the trick, but occasionally I crave something a little bit heartier and less carb-heavy.

Since I’m deeply obsessed with Mexican flavors and have the related ingredients on hand any given day of the week, those tend to be the breakfasts I lean towards when I want something a little bit heavier.

These Black Bean, Chorizo and Poached Egg Tostatads have recently become my new favorite Mexican breakfast obsession. Not only are they packed full of flavor, they’re hearty enough to keep my stomach from angrily growling at me mid-morning before it’s acceptable to eat yet another meal. Sometimes they even keep my stomach content to the point where I only need a light snack for lunch, which in turn lets me go hog wild for dinner with meals like this or this. 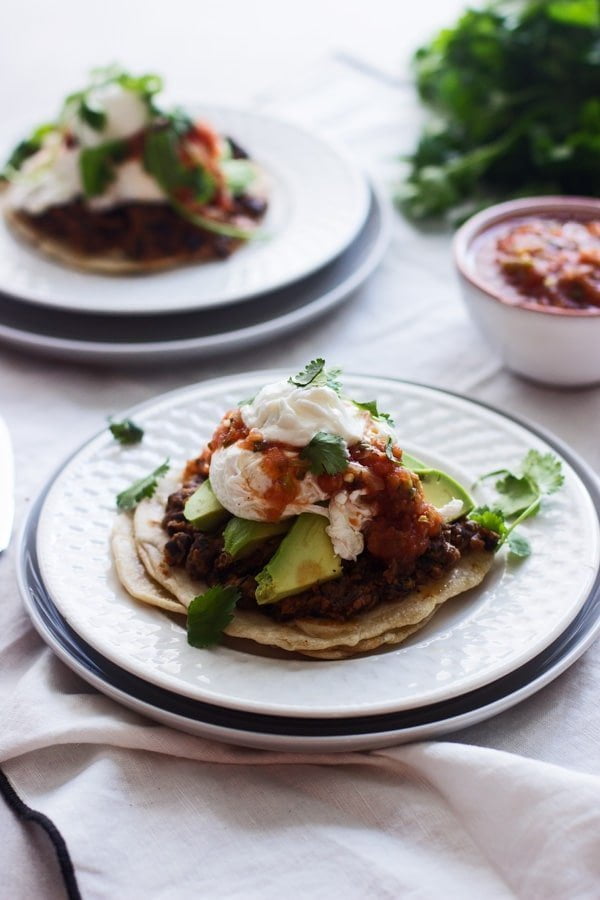 Chorizo is one of my all-time favorite ingredients when it comes to Mexican inspired breakfasts, and actually, just generally speaking. I throw it in everything from breakfast burritos to huevos rancheros to quick chilaquiles and beyond. It’s high in fat, but because of the plethora of spices packed into the meat, a little bit goes a long way.

Sometimes I’ll even use the tiniest portion of chorizo purely to infuse flavor into other ingredients, instead of letting it be the star of the show. Scrambled Eggs. The base of sauces. Intertwined with ground chicken or ground turkey. All perfect vessels to be amped up with a little bit of flavor and spiciness.

Here, I used it as a flavor base for some quickly re-fried black beans, instead of sautéing a bunch of onion and spices to season the beans, I relied on all the inherent flavors of the chorizo – which off the top of my head are garlic, onion, ground chile and cumin. By the time the beans sauté in the chorizo, you only really need to season them with a little bit of cumin, salt and pepper. 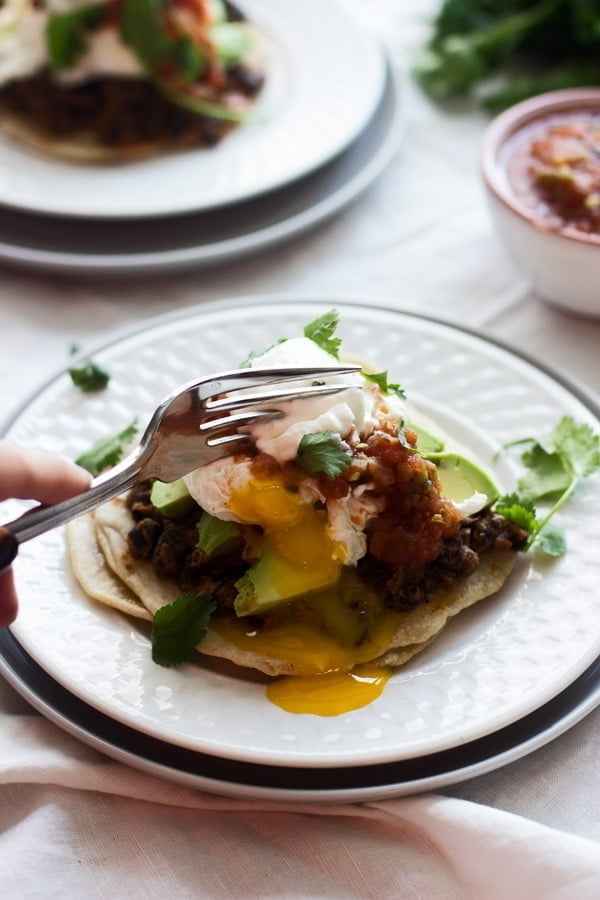 The bean and chorizo mixture is spread onto soft flour (or corn) tortillas, topped with avocado, a poached egg (a fried egg would also be perfect) and then smothered in lime sour cream cream, salsa and a little bit of fresh cilantro.

I was feeling extra motivated this particular morning so I whipped up my own homemade salsa with some canned tomatoes, cilantro, jalapeno and garlic, but I’ll be honest, most days I’m not feeling that ambitious and will just use whatever salsa or hot sauce (sirracha!) I have on hand.

I will warn you, the bean mixture makes enough for at least six tostadas, so if you’re not serving this to your family or more than two people, store the leftovers in the fridge so you can make breakfast in a flash later in the week.

I am not ashamed to admit that I had this for breakfast and lunch for three days straight….so simple, but so delicious. 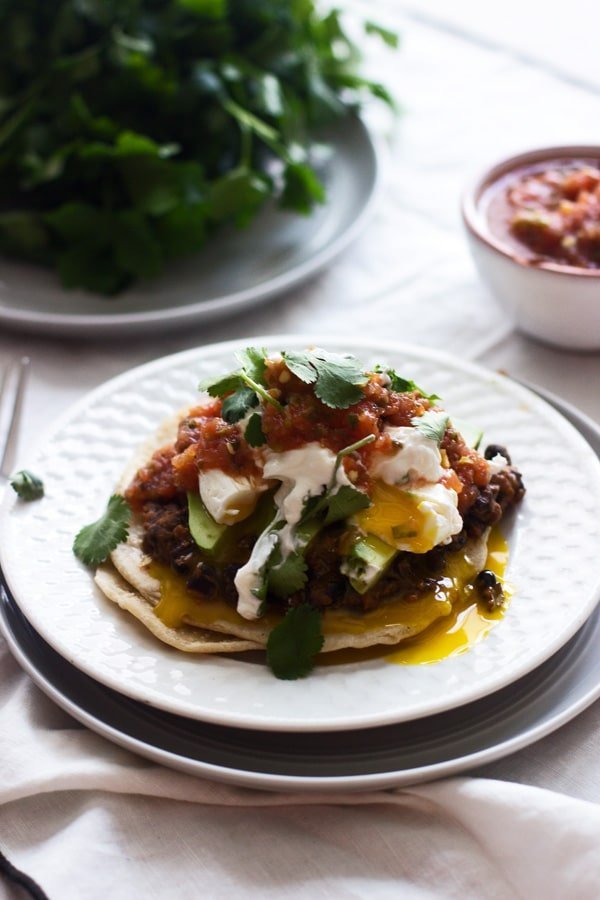