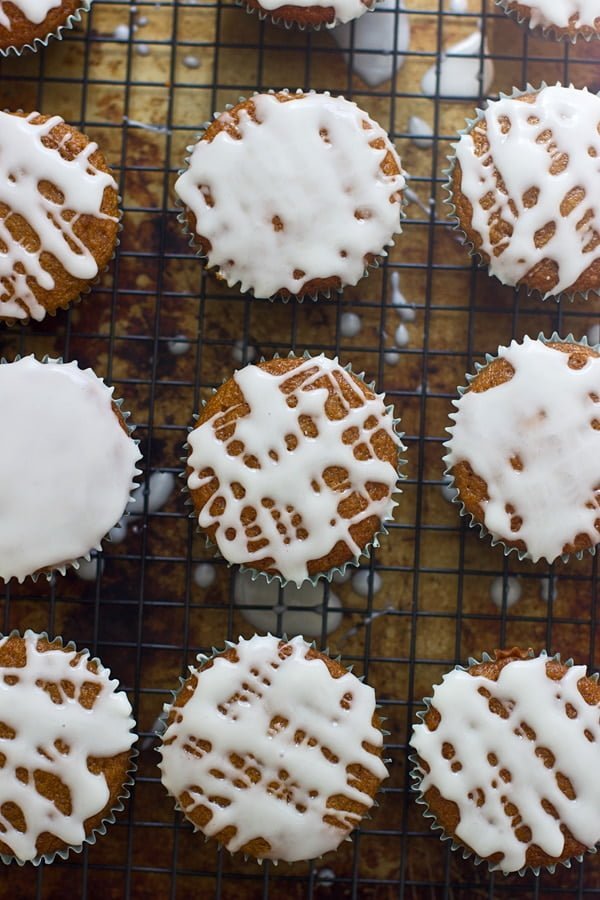 I’m guessing this is the 3,214 pumpkin muffin recipe you’ve seen floating around the Internet in the last four weeks, yes?? And while my brain is telling me you’ve probably seen enough, heck I’ve seen enough, and we aren’t even all the way through October, these pumpkin muffins are just too darn good not to share.

They’re a recipe my Mom has made since basically forever, and after high school, I followed suit. Each year without fail, they make an appearance at least once or twice, and each time I’m reminded exactly why they have stayed relevant all these years. They don’t have any fancy ingredients, take literally no time to throw together and are seriously some of the softest, moistest and most delicious muffins I’ve ever made. I even threw these together countless times in college to bring to various parties where they were inhaled in mere seconds, and while a gaggle full of drunken college students would likely eat anything, the rate at which they were consumed is truly a testament to how delicious they are. 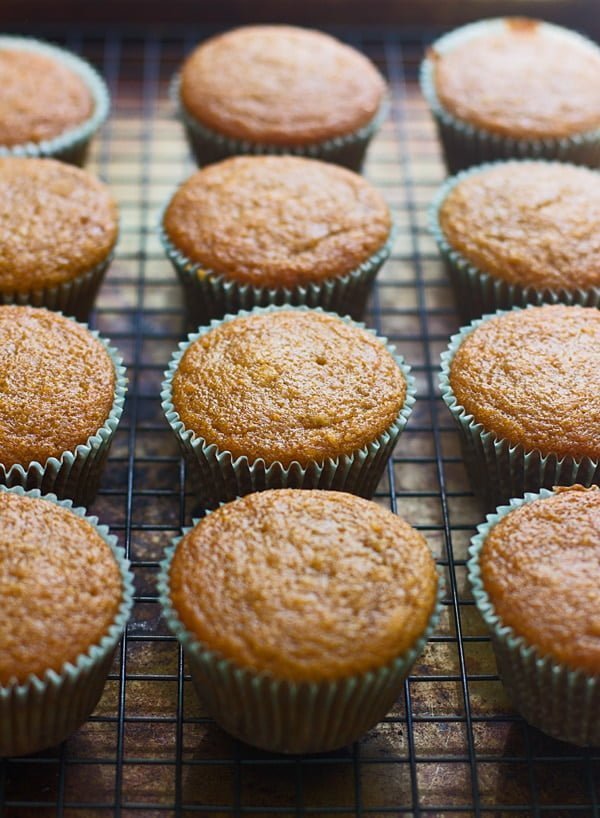 The recipe originated from one of those old-school cookbooks a neighborhood or school puts together to raise money that my Mom acquired at some point over the years – it’s crazy how many hidden gems are buried within the pages of those things. Typically I won’t stray from the ingredients and directions – you know, if ain’t broke, don’t fix it – but I bought a giant vat of apple cider a while ago and wanted to see if I could play with the ingredients a little bit.

Adding the apple cider allowed me to reduce the oil content by just a smidge, although I wouldn’t recommend reducing it by any more, as the oil is what helps to achieve the seemingly endless moistness in the muffins. Here’s how it goes, pureed pumpkin, vegetable oil, apple cider, LOTS of sugar (these are not light muffins!) and eggs make up the wet ingredients which are vigorously stirred together. Then all-purpose flour, baking powder and salt and gently stirred in just until it’s combined. The batter is spooned into muffin liners, popped into the oven to bake, and they’re done – literally the easiest muffins on the planet. 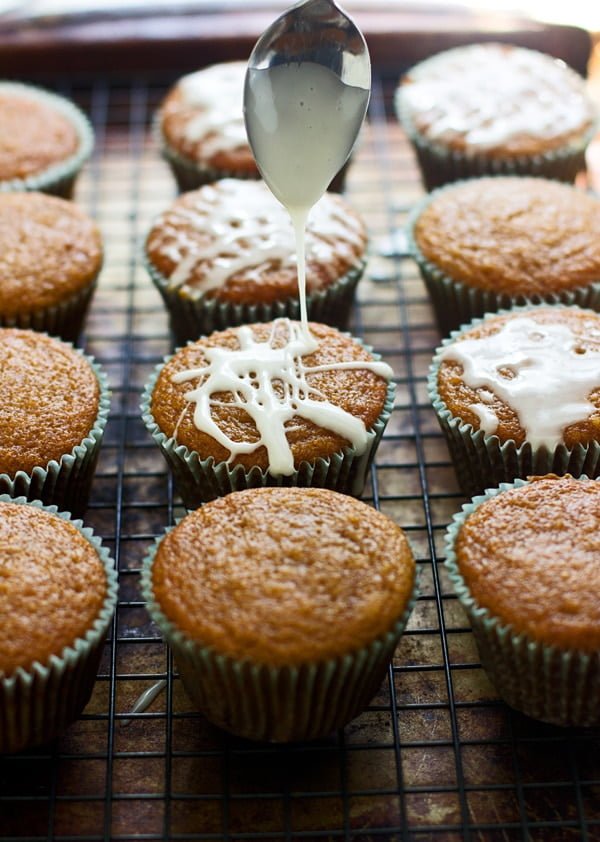 The original recipe calls for a cream cheese icing, but I feel like I put cream cheese icing on practically every baked good that comes out of my kitchen, so in sticking with the apple cider theme, I mixed a little bit of the apple cider with some powdered sugar for a super simple, cider-laced glaze to grace the tops of the muffins. You can either drizzle the glaze on artfully, or just puddle it on the top, either way works, and I promise whoever you serve these to will inhale them just as fast as my inebriated college friends did… 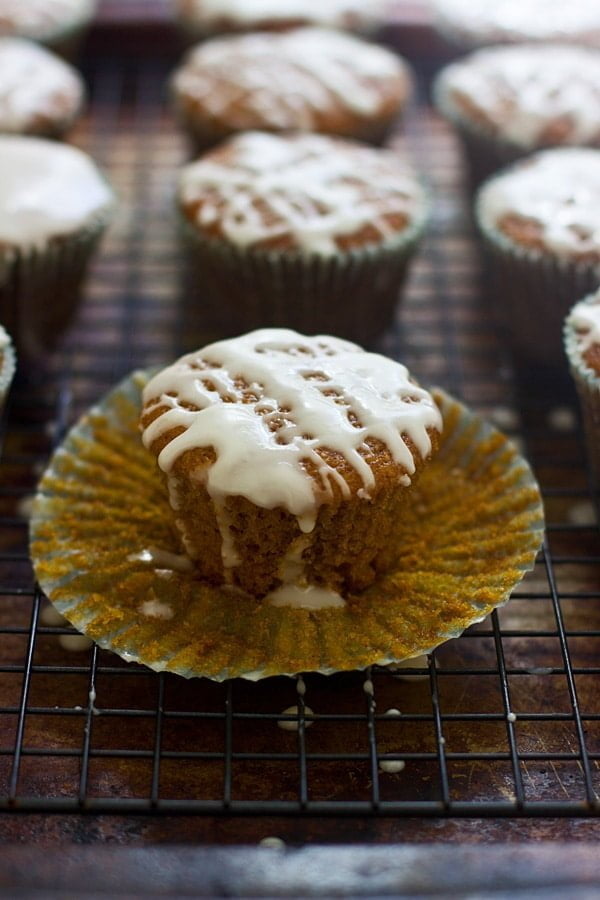 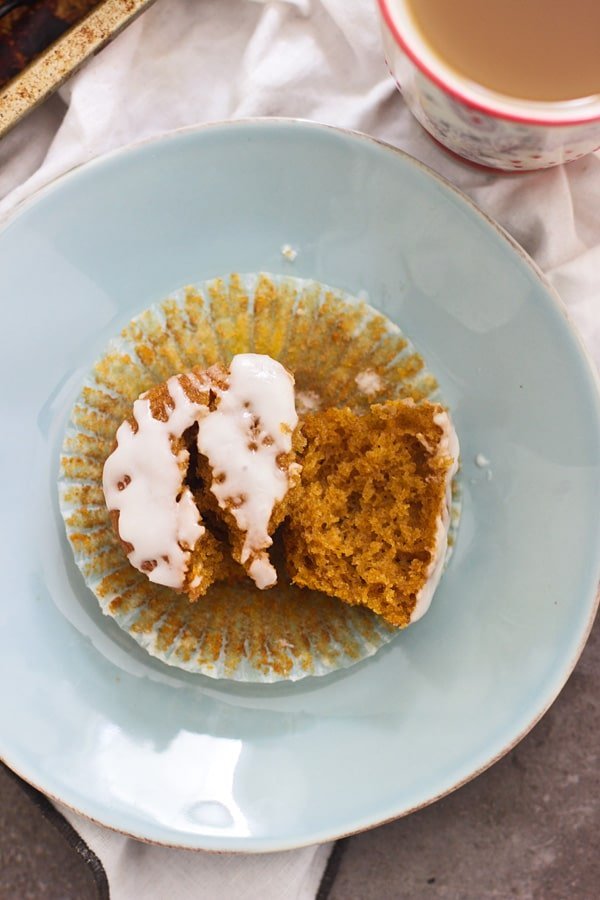 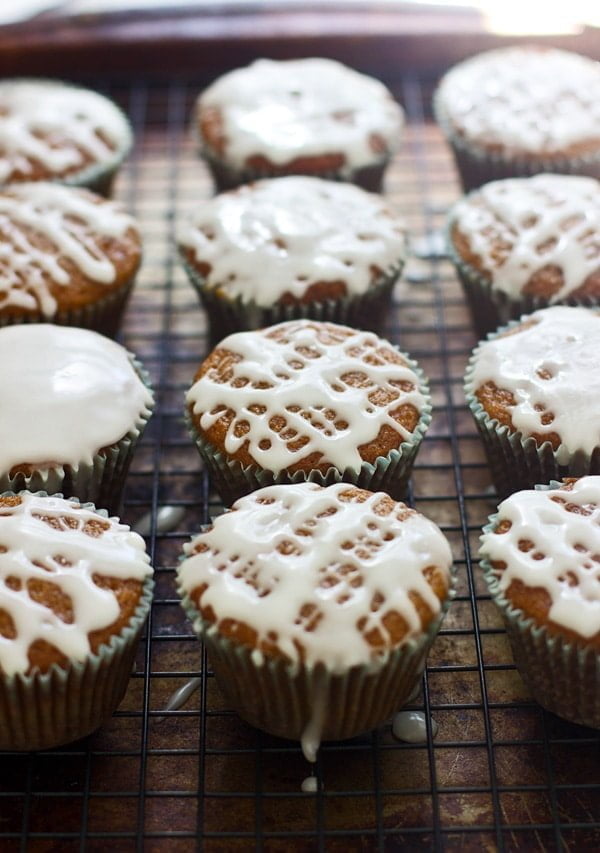