Why do we let pumpkin have all the glory when we can hand-pick perfectly crisp apples, combine them with only four simple ingredients and end up with this 5-Simple Apple Crisp?? 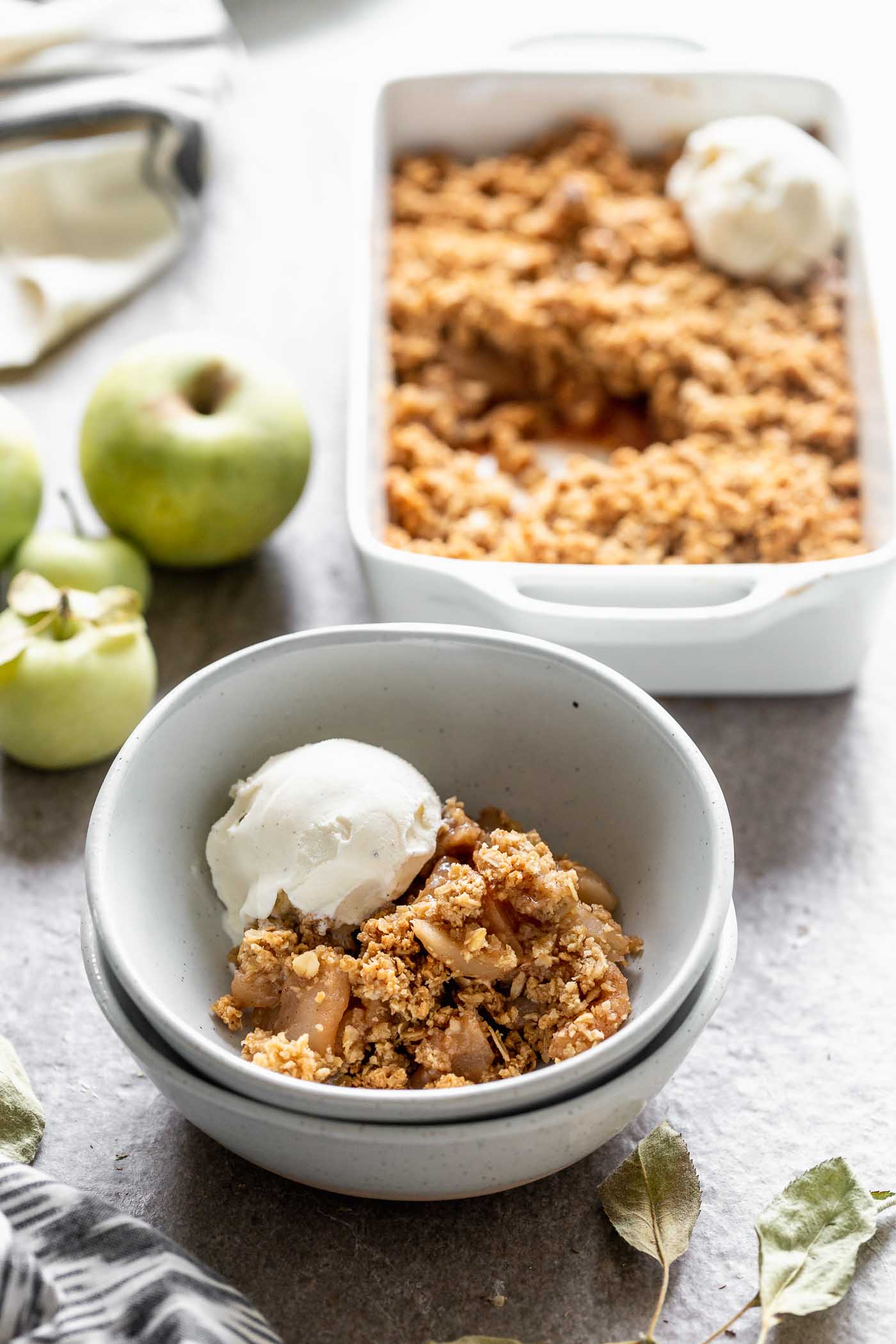 Seriously. Why is fall ALL about pumpkin? For me, not only do apples taste better, but I find them to infinitely more versatile and easy to work with. They don’t require you to use every muscle of your body to cut them open, scoop out the flesh and then cook the meat. And I love that they’re equally delicious raw or cooked. (Hi apples slathered with peanut butter or dipped in gooey caramel.)

Granted, I absolutely look forward to my requisite pumpkin dessert of the season, but once I’ve had one, I’m pretty much good to go.  On the other hand, I could eat an apple dessert on the regular during the cool fall months, and never tire of it.

Give me ALL of the Gourmet Candy Apples, Apple Cobbler with Sweet Cream (and biscuits!), and Apples with caramel yogurt.

Like most of America, we set out to go apple picking last week  some friends, and of course, came home with an obscene amount of apples. And while I was tempted to whip up something super impressive and elaborate, I decided to swing the other direction and do my best to come up with the most delicious way to let the apples shine, in the simplest way possible.

I wanted even the most novice of cooks to be able to make this, no problem, and I didn’t want a long list of ingredients to be in the mix.. So here she is: 5-Ingredient Apple Crisp. 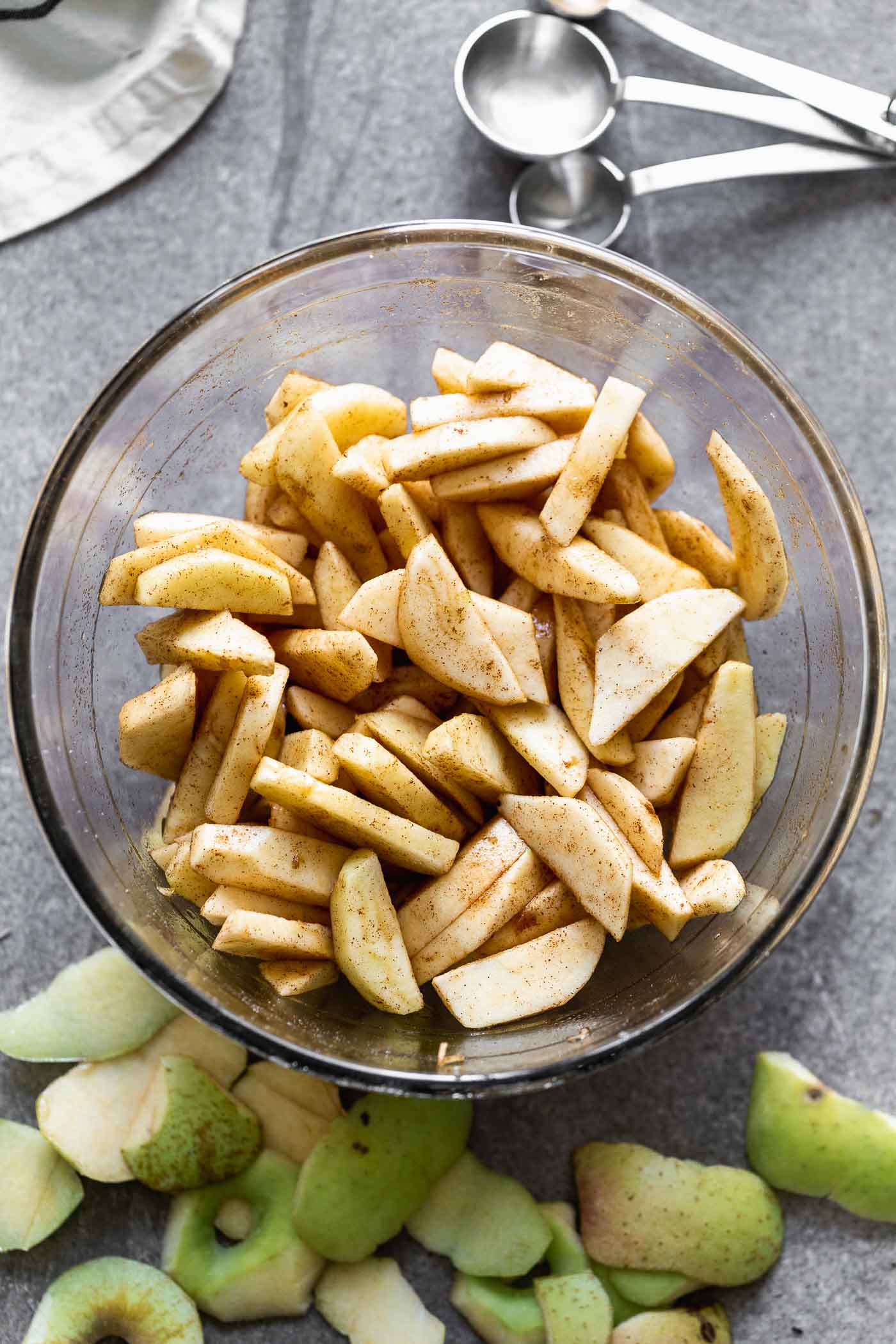 How to make apple crisp with just five ingredients

Ok, so here’s the thing about apple crisps. The topping needs to be, as stated, crisp.  Usually that requires a combination of sugar, butter and flour, and most of my crisp recipes (see here and here) are part oats (for texture), part flour (for crunch), part white sugar, and part brown sugar. But in keeping with my minimalistic approach, I wanted to find a way to pair the ingredients down. For me, the non-negtiables were apples of course, followed by butter, brown sugar and cinnamon.

Making a topping without the addition of oats is much easier than making one without flour, but I just can’t live without the texture oats bring to a crisp, so I set out to find a way to change up my go-to recipe.

After pondering it for a bit, I got the bright idea to MAKE my own flour using the oats. And it worked! All I did was pop a cup of oats into the food processor, and let it whirl around for a few minutes until the oats resembled flour.  Not only do they act as the flour in the crisp topping, but they also act as a thickener in the apple filling. 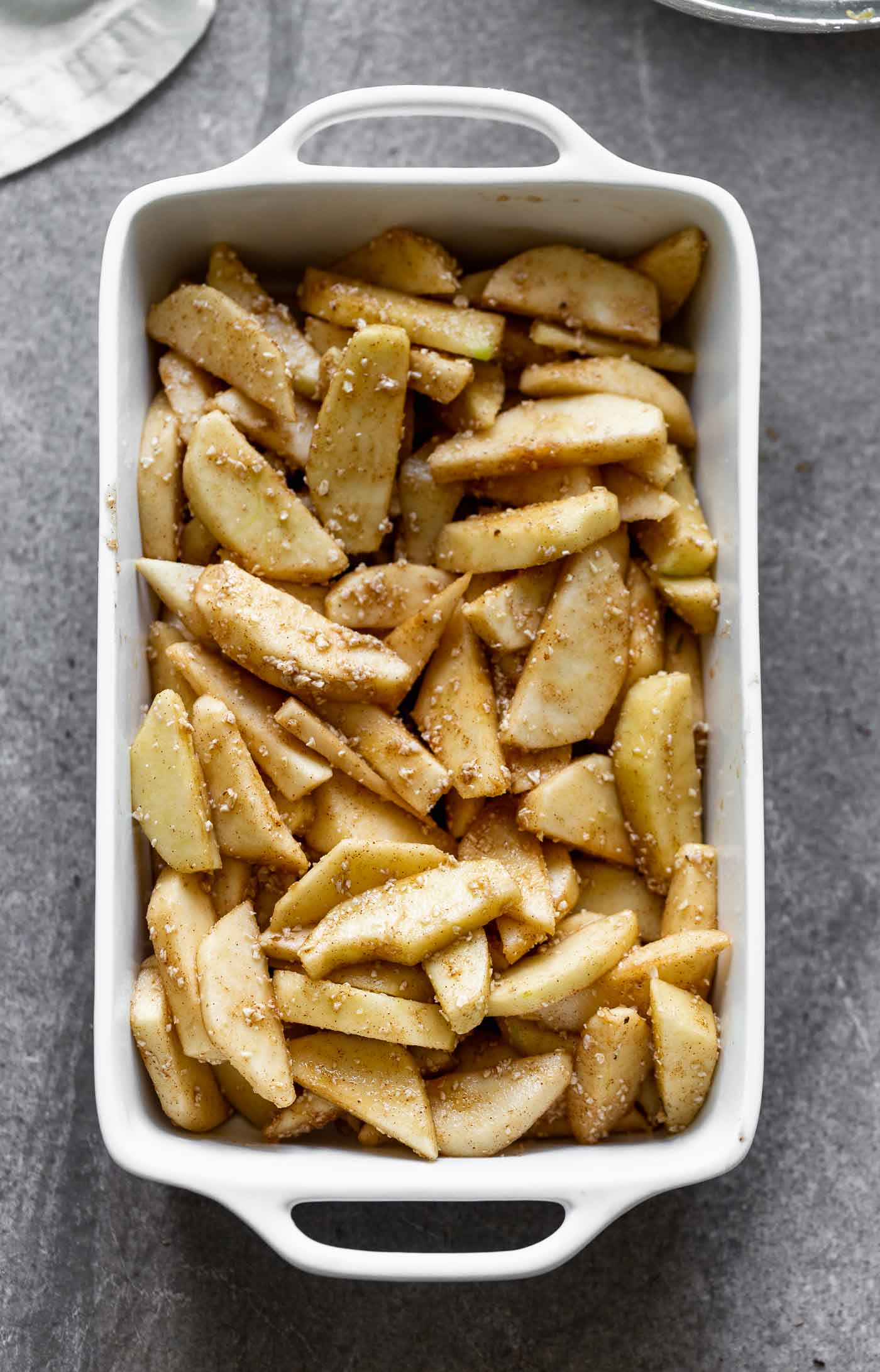 Brown sugar. I prefer brown sugar over white sugar because I think it has more flavor. I love the molasses taste it has, and with only five ingredients, you really want as much complex flavor as possible.

Oats. Rolled oats are best for this, but, quick-cooking oats also work great. Whatever you’ve got works! If you have to go buy something, get rolled oats.

Cinnamon. Always cinnamon in fall-inspired apple desserts. If I could get away with a sixth ingredient, I’d sneak in a little bit of ground nutmeg as well.

Kosher Salt. This of course,  doesn’t count as an actual ingredient (rules of the internet). Salt is always essential in baking to balance out the sweetness in desserts. I have to love really tasting the salt, so I always use a heavy hand. 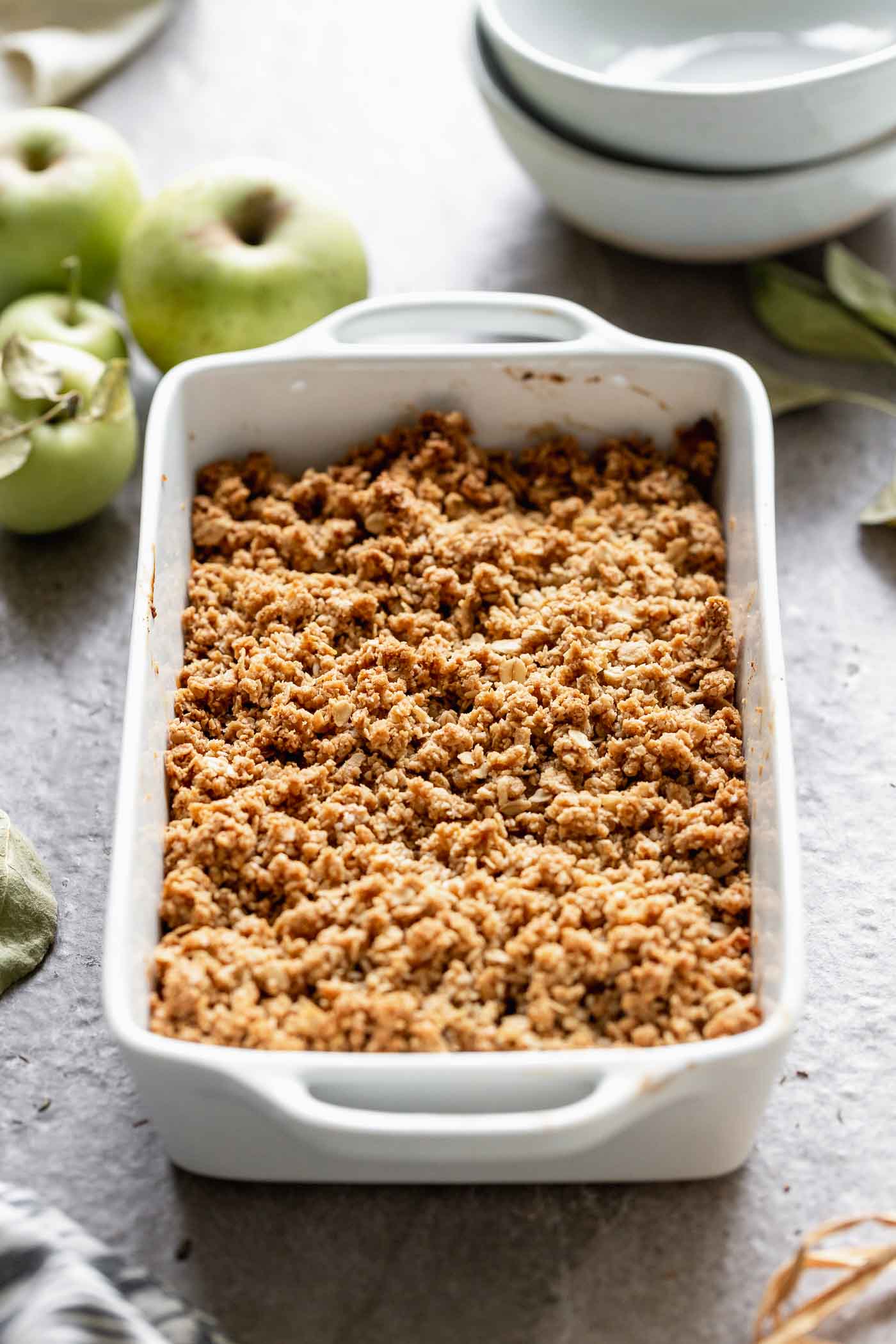 How to make this Simple Apple Crisp

How to make the filling. When five ingredients is the name of the game, that means everything is super simple and easy, and that starts with the filling.

Peeled and sliced apples are tossed with plenty of brown sugar, a little bit of salt, cinnamon and few tablespoons of the homemade oat flour to soak up all the juices.  Everything is tossed together and nestled into a small baking dish. I used this one.

Oh, and I almost forgot, I also like to sneak in a couple pats of butter into the filling for extra richness. Just dice up a couple of tablespoons and toss it with the apple mixture. It helps to keep the apple filling nice and moist. Plus, a little extra butter is always a good idea.

How to make the crumble topping. The crisp topping barely requires any more effort than the filling, just a willingness to get a lit bit more dirty.

First, blend the oats in the food processor until they become similar in texture to flour.

Add the butter, oats, oat flour, cinnamon, brown sugar and salt to a mixing bowl. Use your fingertips to cut the butter into the dry ingredients. You know it’s completely mixed in when there’s evenly distributed clumps of butter, oats, sugar and oat flour.

Assembly and cooking. Sprinkle the topping over the apples. Pop the dish into the oven until bubbly, brown and super crispy.  Let it rest for a few minutes before scooping into bowls, divvying them out and topping them all off with a scoop of vanilla ice cream.

Obviously the ice cream makes this go up to six ingredients, but it’s worth it! 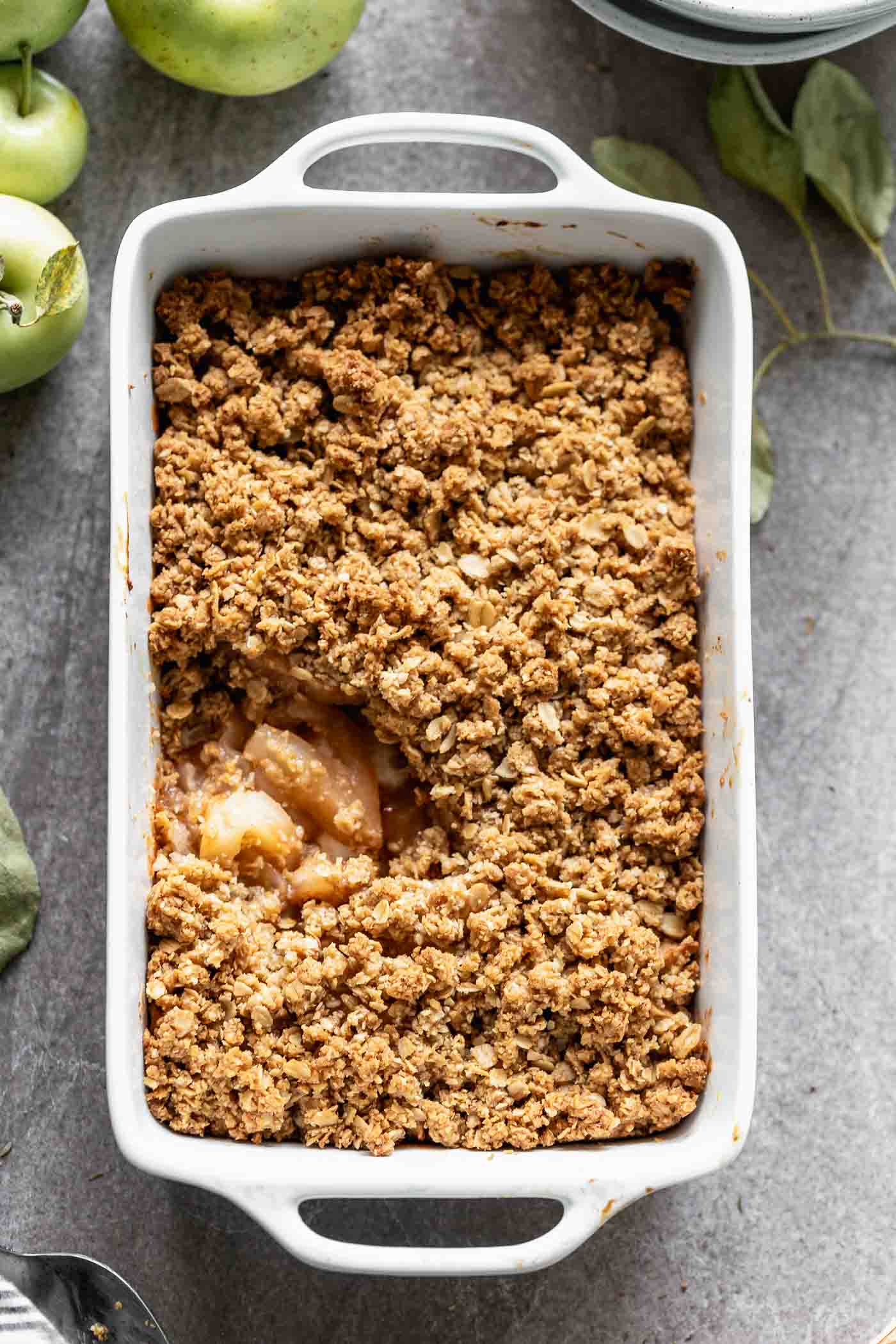 Can this be made ahead of time?

Yes! You can assemble the entire thing the morning of, or day before. Pull it out of the fridge and straight into a pre-heated oven. You could also make either the filling or the topping ahead. I would not however, completely bake it ahead of time if you want it to be crisp. Which leads me to my next question…

How is it leftover?

So good! But, it’s definitely not as crispy, so keep that in mind. However, it DOES become soft and melt-in-your-mouth delicious. Just spoon a little bit into a bowl and microwave for 25-30 seconds. Top with ice cream.

This Apple Cobbler with Warm Sweet Cream is a more labor-intensive version of apple crisp, but totally worth it, especially for a crowd. These Individual Apple Galettes are adorable, easy to make, and perfect for fancy dinner parties. Caramel Apple Pull-Apart Bread is the perfect sweet breakfast treat when you’re feeling a little ambitious in the morning. 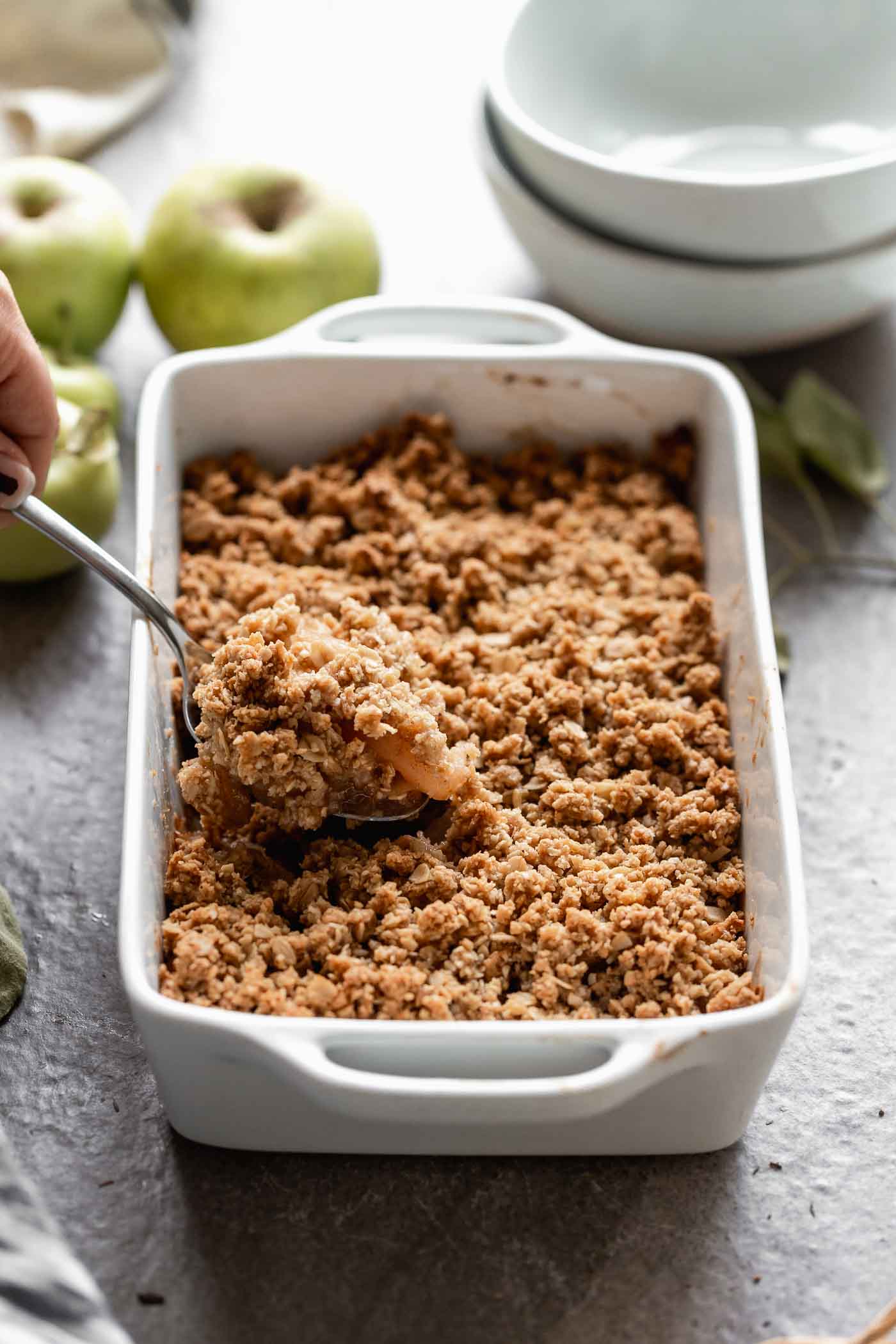 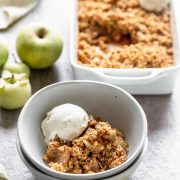 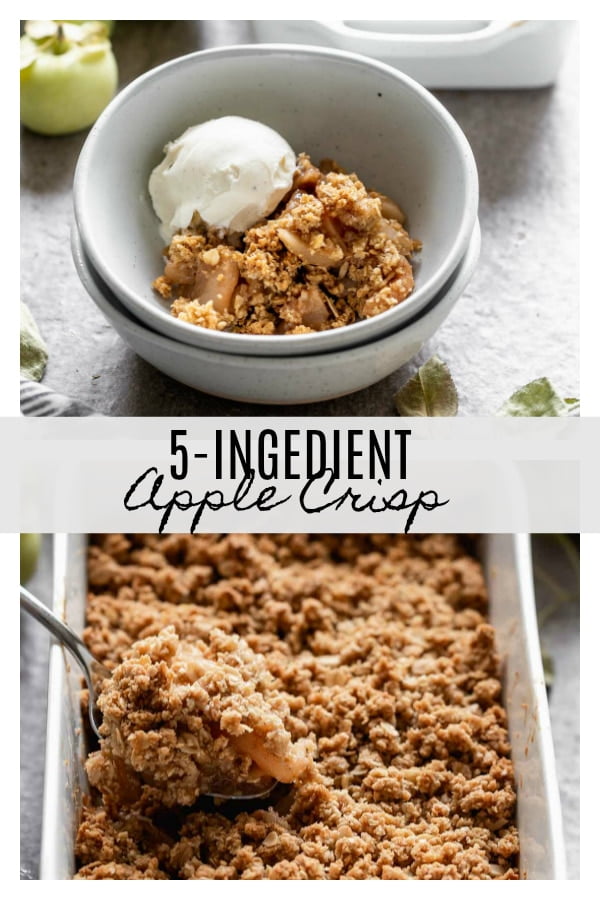