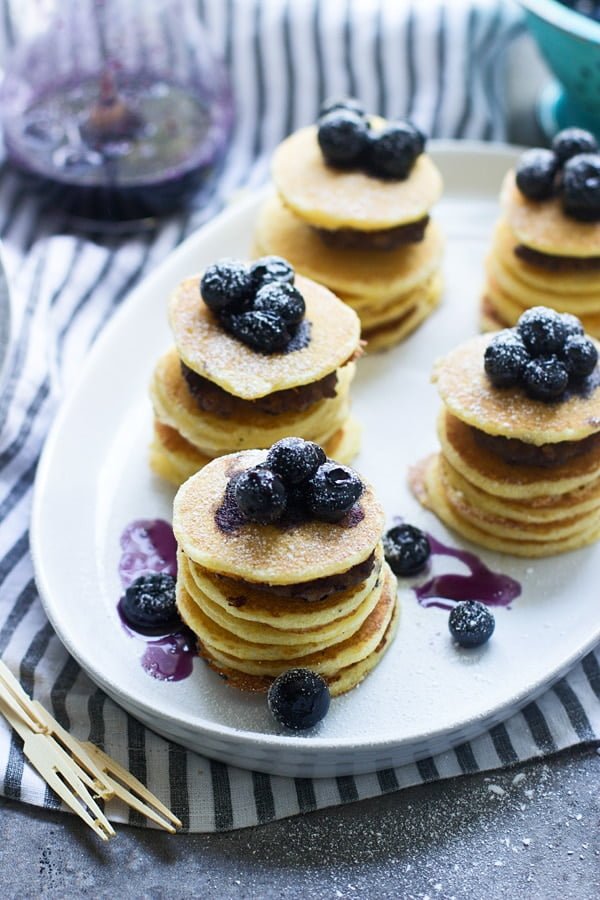 As you may have gathered from my not-so-subtle recipe and title, Cooking for Keeps is getting a new addition! Kevin and I are expecting our first little bambino in mid-December and we could not be more excited.

So! A little backstory. I’m 20 weeks along and feel wonderful. Yes, this was planned and no, we aren’t finding out what the gender is. I go back and forth on wanting to find out the gender, but Kevin was dead-set on not finding out, and he really doesn’t ask for many things in life, so I granted him this wish with the caveat that I rule all things pertaining to decorating the nursery, picking out strollers and other fun stuff I can actually control.

I don’t want to brag and some of you mommas out there might want to punch me, but I’ve been one of the very very lucky ones that has had virtually no pregnancy symptoms. Besides a mild three-week bout of not feeling 100% myself in the first trimester, I’ve felt great. It’s almost a detriment though, because up until my 16-week appointment and even still a little bit now, I would get myself so worked up that something was wrong since I was experiencing so little symptoms that I nearly drove myself crazy. Luckily, we just had our 20-week sonogram and baby looks perfectly healthy – such a relief! 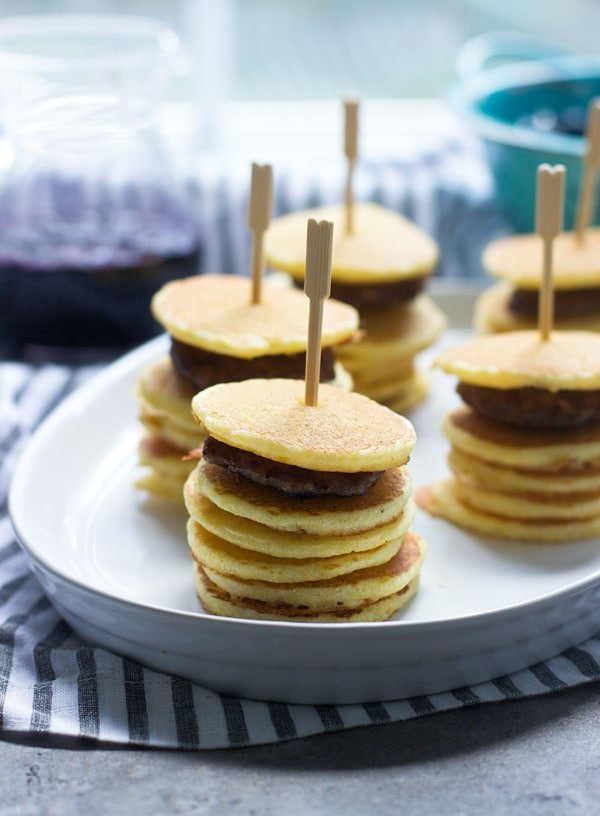 For full disclosure and because I think it’s important for these issues to be openly discussed, I’m going to give you a little bit more detail on our pregnancy story. I have always been a worrier, and for some reason I just never thought I would be one of those people who would get pregnant right away. I have no idea why I thought this since I’ve never had any issues that might prolong the process, but nevertheless I was preparing myself for the possibility of it not happening instantaneously. We decided to try and make it happen in November…

Imagine my utter disbelief a few days shy of Christmas, when I randomly decided to take a pregnancy test at work “just to make sure,” as I was about to embark on the holidays and a heavier drinking schedule than normal, and that second pink line popped up…vividly and immediately.

After several days of shock, too many positive pregnancy tests and sharing the news with our parents and two of my best friends, it finally started to sink in and I was elated (and scared!). 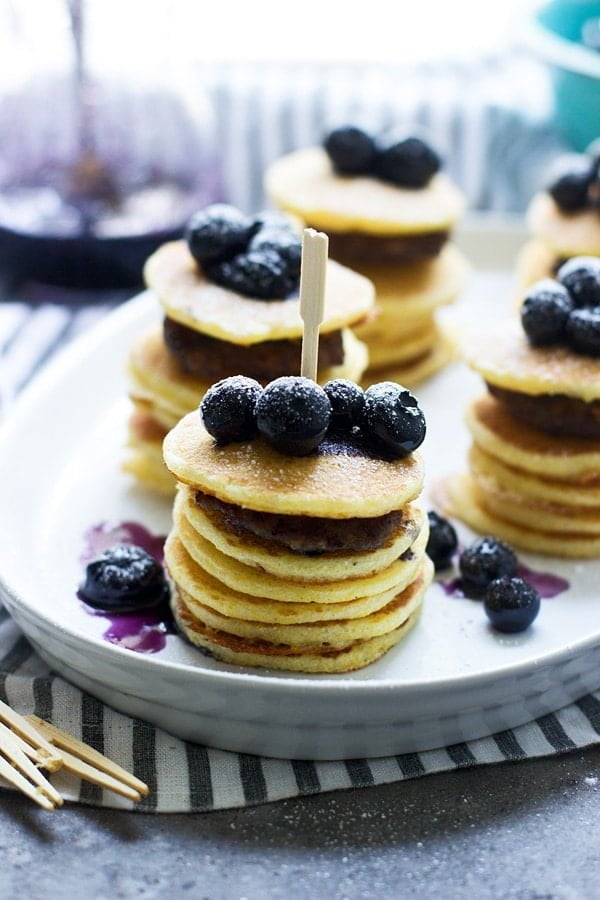 Fast-forward a few weeks later, I was having some spotting which my doctor assured me was perfectly normal, but then it picked up a bit, and I just knew something wasn’t right. Long story short, I went in to get my levels checked and they were only measuring at four to five weeks instead of seven weeks…at some point early on, the pregnancy just didn’t take.

Because it was so early in the pregnancy, there was no need for medical intervention and nature took its course. I was then told to wait one full cycle after the miscarriage before we could start trying to get pregnant again, the first month, nothing. I was actually kind of relieved since we had so much coming up in the summer, and I said that if nothing happened again the next month, then I’d hold off for a few months so I could just enjoy the summer. Welp, a few days after Easter…another positive pregnancy test.

I was definitely more hesitant to get excited this time around for obvious reasons, but nine weeks passed, then 12, then 16 and now 20. After each appointment I felt more and more confident, and finally feel ready to share the news.

The reason I wanted to share the entire story is because I feel like miscarriage isn’t really something that’s openly talked about, and a lot of women trying to get pregnant have no clue how common an early miscarriage is. After I had mine, almost everyone I talked about it with either had it happen to them or knew someone close to them who did as well, and sometimes it’s just nice to know you’re not the only one.

We’ve already gotten started on the nursery (I’ll definitely share photos once it’s complete), had our first baby shower (thrown by my sweet mother-in-law, Karyl and sister-in-law, Ryan) and I’m going shopping in the next couple of weeks with my Mom for a crib and glider – this is REAL… 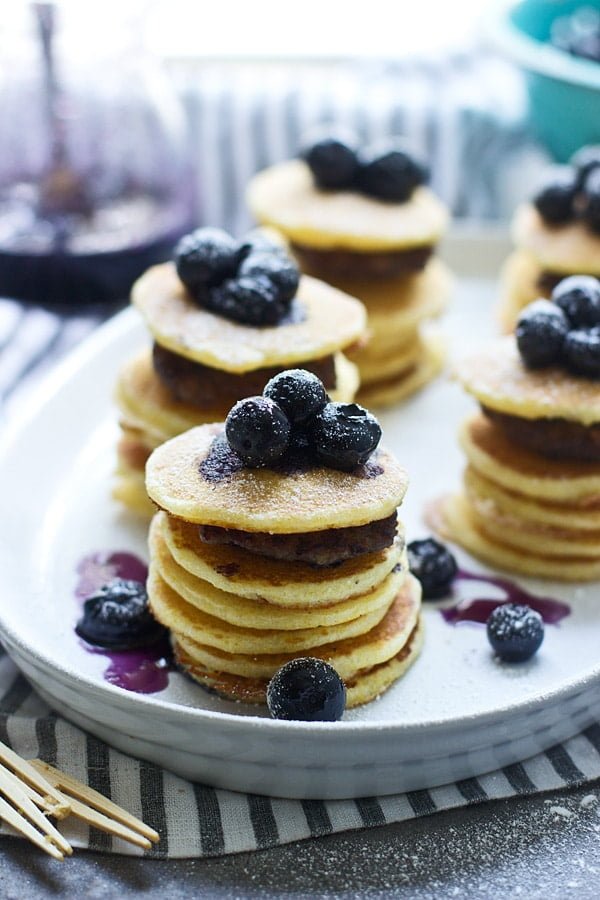 Now, what better way to celebrate a baby than with all things miniature and adorable?? I whipped up these super cute baby corn cakes and sausage skewers for a random Sunday brunch this past week, but these would be the perfect addition to a brunch bridal or baby shower.

To go with the sweet and savory breakfast bites, I threw together a super quick blueberry syrup with a handful of fresh blueberries and some pure maple syrup (make sure to use the good stuff), then dusted them with a little bit of powdered sugar and served them on a pretty white platter.