One of our favorite easy dinners as of late are these super flavorful Chicken Peanut Burgers. With peanut sauce in the chicken patties themselves and in the crunchy slaw, they’re definitely for peanut sauce lovers. The chicken breast burgers are finished off with gooey Monterrey jack cheese, plenty of chopped peanuts, and served on a toasted whole-wheat bun. 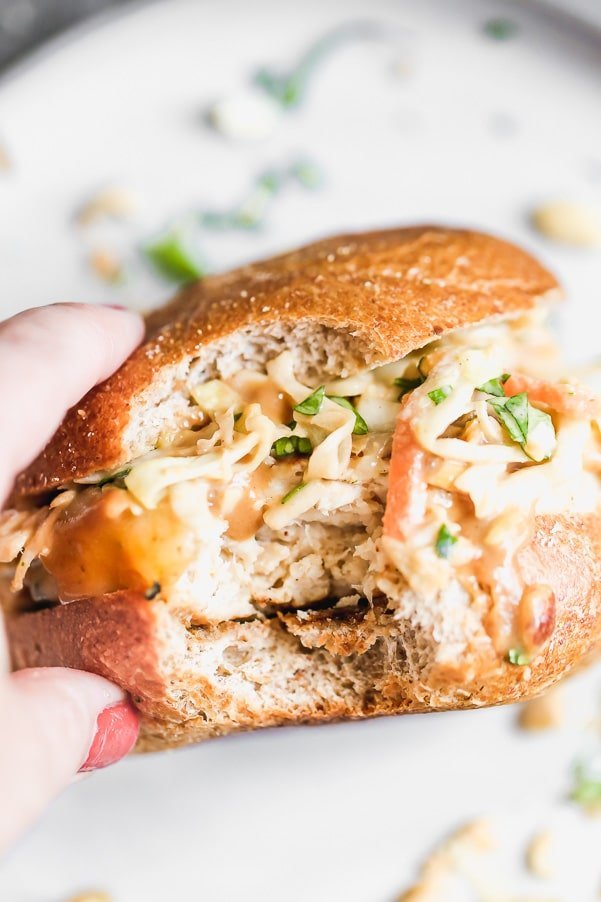 While I do, of course, love a greasy, juicy beef cheeseburger from time to time, at home, I’m all about the chicken burger. Tender, moist, infinitely adaptable, and so darn delicious. Much like a regular burger, you have a seemingly endless blank canvas to work with, but I’d argue because of chicken’s more neutral stature, you have even more creative control over the flavor.

Transform chicken breast into an Asian-inspired spicy chicken burger with wasabi slaw, dress it up with a Mexican flair, similar to these healthy no-bun blackened burgers with smashed avocado, heck stuff it with cheese, marinara sauce, and call it chicken parmesan.

The chicken burger world is your oyster when you have an imagination.

Today’s Chicken Peanut Burgers are no exception. They’re packed with flavor from our three-ingredient peanut sauce, plenty of garlic, and just a touch of ginger. They’re served simply with a store-bought slaw mix also dressed with our easy peanut sauce, gooey Monterrey jack cheese, and plenty of chopped peanuts for texture, and cilantro for garnish.

Serve on a whole-wheat bun alongside a simple salad, and call it dinner. 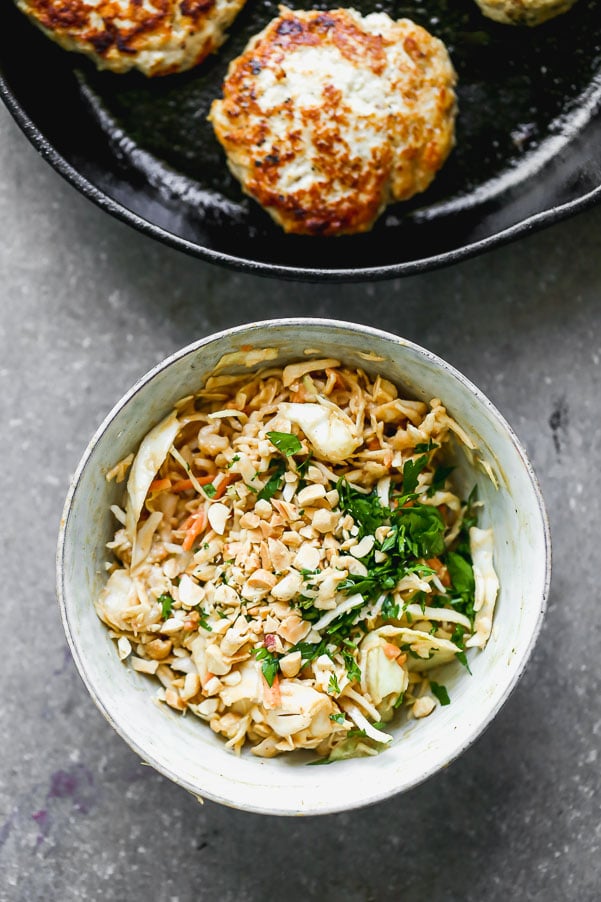 Chicken. If I’m going to go with chicken burgers, I’m always going to reach for ground chicken breast. If you’re not careful, you can grab ground chicken that has all of the skin and dark meat in it, making it just a fattening and calorie-heavy as some cuts of ground beef.

I typically buy it already ground up at the store, but if it’s really expensive or not available, I’ll just buy chicken breasts, cut them into small pieces and whip them up in the food processor until they’re ground.

Peanut Sauce. As mentioned above, we use our three-ingredient peanut sauce. If you just want to use store-bought that’s okay too.

Monterrey jack cheese. There are a number of cheeses you could use here, but I had Monterrey jack on hand, so that’s what I used in this particular version. Pepperjack, mozzarella or a creamy havarti would also work nicely.

Slaw. Instead of making my own slaw mixture with cabbage, carrots, and red cabbage, I just buy an UNDRESSED package of slaw mix at the grocery store.

Cilantro.  To dress up the slaw and add a little bit of freshness, I like to add in plenty of chopped cilantro.

Peanuts. While chopped peanuts aren’t necessary, I really like the added crunch and texture they add to the chicken peanut burgers. 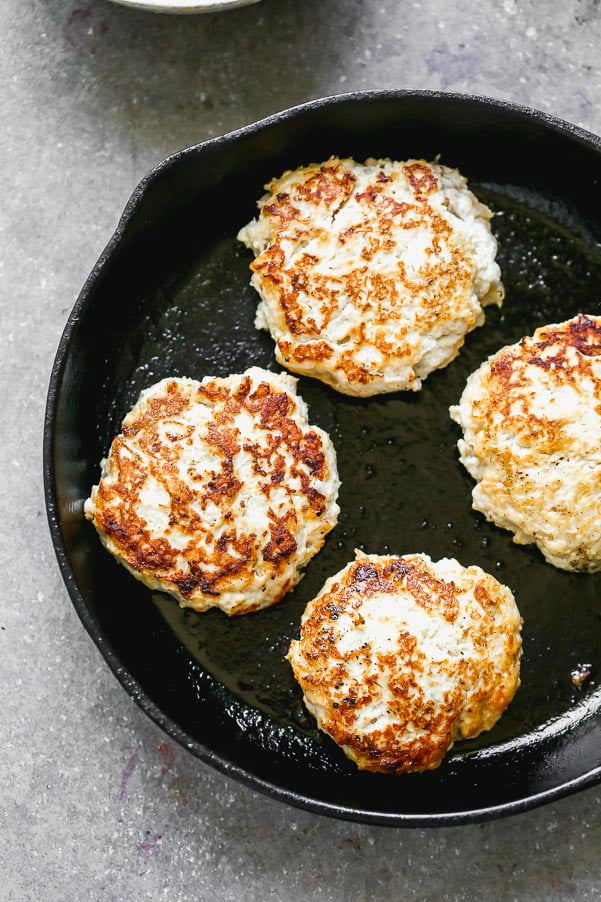 How to make Chicken Peanut Burgers

Make the peanut sauce. If you’re making your own peanut sauce, you’ll want to do that first. Our three-ingredient peanut sauce consists of simply whisking peanut butter, hoisin, rice vinegar, and chicken stock or water together in a small bowl.

Make the chicken burgers. Add the ground chicken breast, peanut sauce, garlic, onion, and salt together in a large bowl. Use hands to mix together.

Form into four patties. Set aside.

Cook the chicken peanut burgers. Heat a large griddle or non-stick skillet to a medium heat. Once the griddle or pan is hot, add a little bit of olive oil. Cook the burgers until golden brown, crisped, and cooked through, about 6-7 minutes per side.

When the burgers are just a few minutes shy of being done, add the cheese. Pour in two tablespoons of water and cover with a lid or another large skillet if using a griddle. You want to steam the burgers until the cheese melts.

Make the slaw. While the burgers cook, mix the slaw mix with peanut sauce, cilantro, and salt. Season with salt and pepper.

Assemble. Toast the buns. Place a chicken patty with cheese on the bottom bun. Spoon slaw on top. Sprinkle with chopped peanuts and extra cilantro. Cover with top bun. 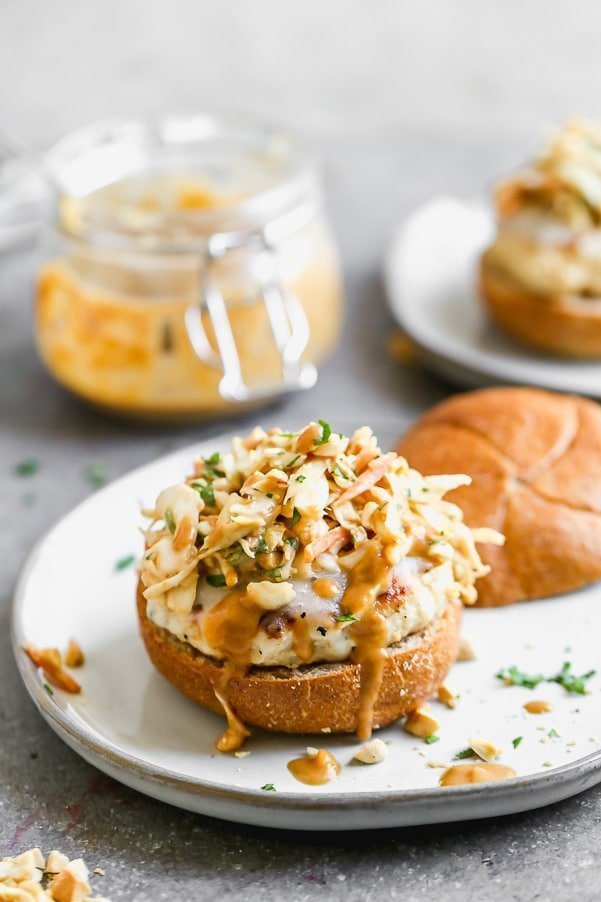 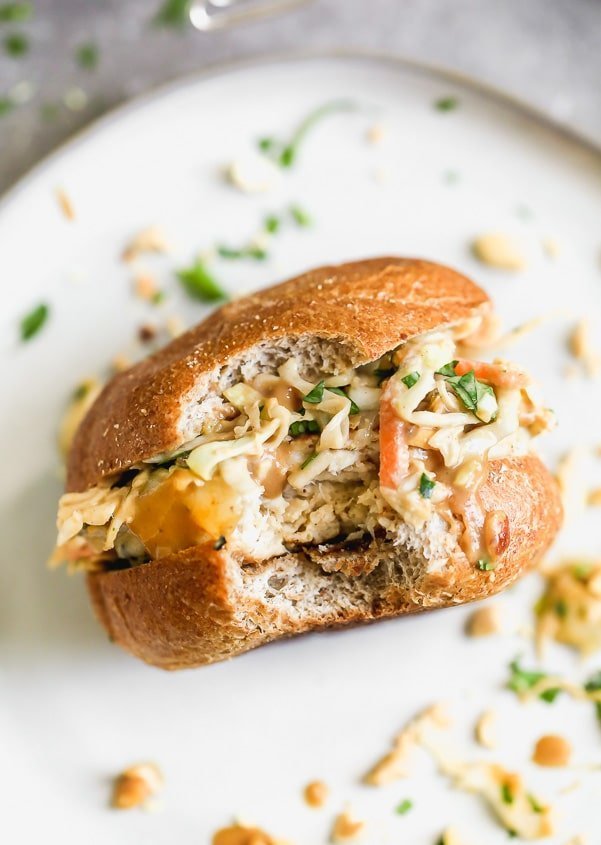 Print Rate Email
One of our favorite easy dinners as of late are these super flavorful Chicken Peanut Burgers. With peanut sauce in the chicken patties themselves and in the crunchy slaw, they're definitely for peanut sauce lovers. The chicken breast burgers are finished off with gooey Monterrey jack cheese, plenty of chopped peanuts, and served on a toasted whole-wheat bun.
Prevent your screen from going dark
4 people