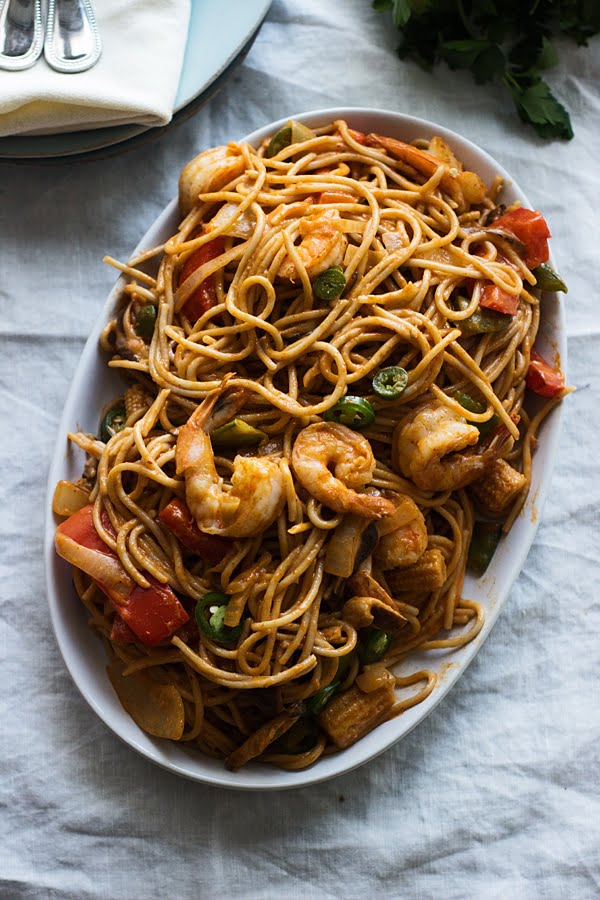 At the moment I’m completely infatuated with everything Asian– a vast departure from my typical obsession with everything Mexican. Instead of churning out enchiladas, dreaming about puffy tacos, and inhaling cheese dip like it’s my job, I’m downing pho like I’ve never had it before, lusting after PF Chang’s crispy honey chicken and slurping up these red curry and coconut noodles like I’ve been deprived of food for days. 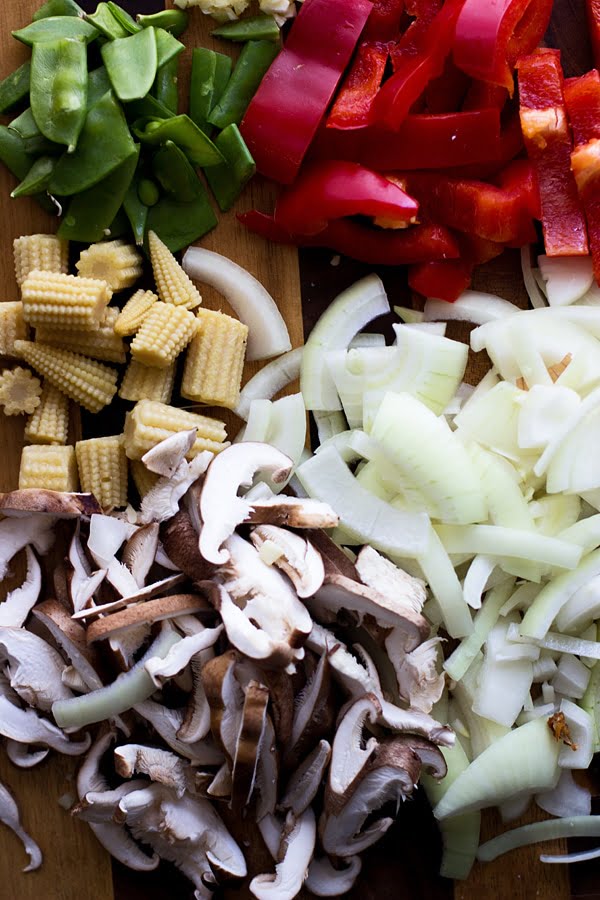 What is it about Asian noodles that’s so incredibly addictive?? Once my chopsticks pick up that first set of noodles, it’s almost like an unconscious being has taken over, methodically shoveling the long, silky noodles from the bowl to my seemingly bottomless stomach. (Oh yeah, I can maneuver those chopsticks like a BOSS.)

While I’m not even close to a vegetarian, documented here, here, here and here, for some odd reason when it comes to Asian noodles I prefer them to be veggie heavy, and could happily skip the meat altogether; Kevin however, appreciates nothing of the sort, so here, I did a combination of chicken, shrimp and veggies to appease both of our discerning palates – anything for love. 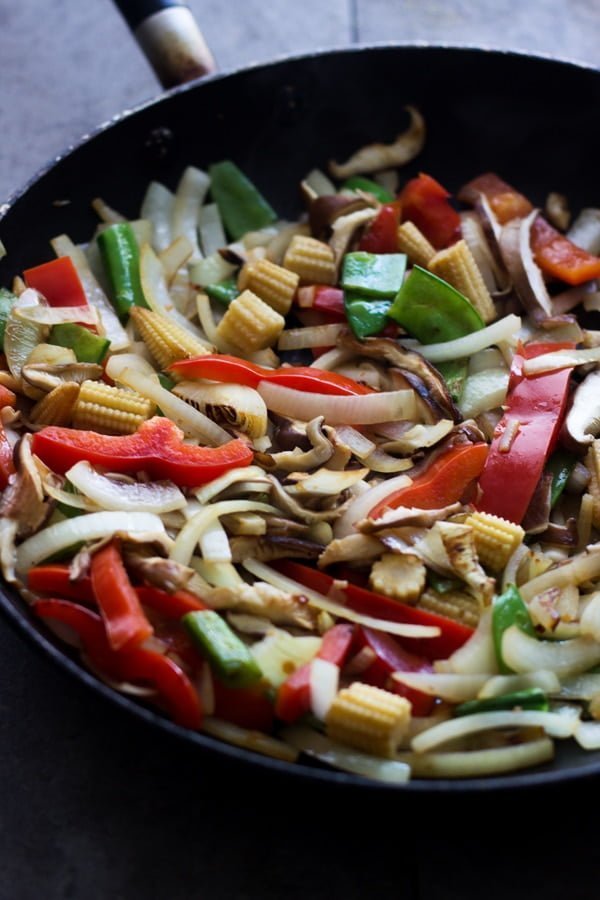 Ever since making this Spicy Thai-Style Pumpkin and Butternut Ramen, I’ve been throwing red curry paste into everything from soups and stews to sauces and salad dressings. I just love the extra oomph of flavor it provides without being overly spicy, as you’d often associate with curry. I’d almost equate it to that hint of warmth cinnamon gives baked goods and slow-cooked sauces, it’s “spicy”, but not in terms of hotness, only in terms of its essence, it that makes sense.

The sauce and blood-line of the noodle dish gets started with a classic vegetable medley found in a number of Thai dishes – red bell pepper, ginger, garlic, baby corn (my favorite), shitake mushrooms, sugar snap peas and thinly sliced onion. Don’t worry if you don’t have those ingredients or prefer to use something else, this isn’t a picky dish, and any vegetable combination will work great. The only three items I’d suggest not leaving out are the ginger, garlic and onion; everything else can be swapped out as you see fit.

Once the veggies have been stir-fried a bit, the curry paste gets blended in, along with a whole can of coconut milk (I used light), and just a touch of chicken stock blended with corn starch to thicken the sauce. Because the chili paste doesn’t have an inherent heat to it, I like to throw in one or two sliced Serrano chili peppers (with the seeds), for an extra kick of spiciness. You can of course tailor the heat to your own palate, but both Kevin and I have a high tolerance for spicy dishes, so for us, the hotter, the better. 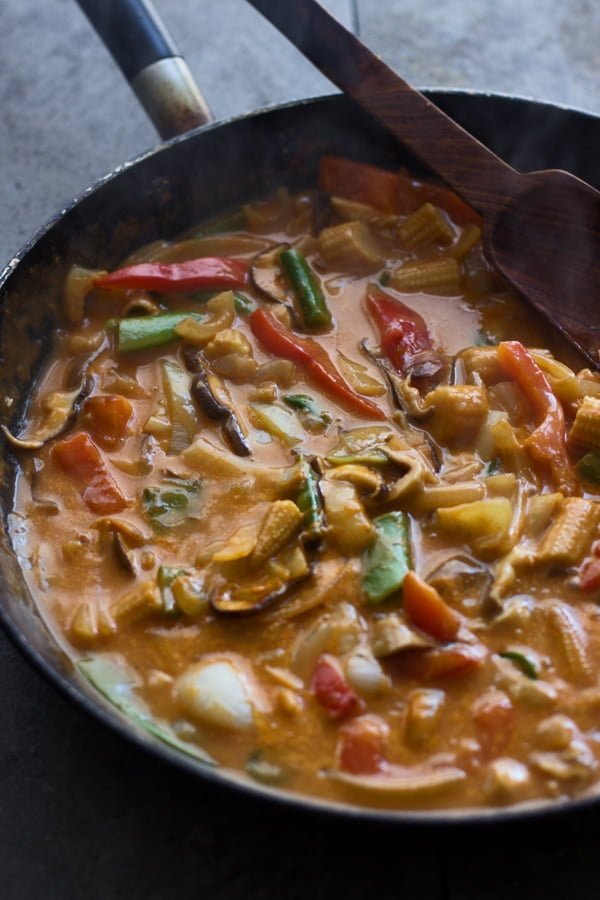 I had originally wanted to use a buckwheat or udon noodle, but I also wanted to use what I had on hand since this was more or less a clean-out-the-pantry kind of recipe. What I had on hand was brown rice noodles which actually worked out kind of perfectly, I feel like they sort of mimic a traditional buckwheat noodle, but are slightly more starchy; really, any long noodle will work great.

Since chicken and shrimp tend to overcook, and Kevin doesn’t love the taste of shrimp laced throughout the sauce, I decided to brown them both up in a separate pan with a little bit of sesame oil; at the last minute I tossed them with the noodles and sauce. 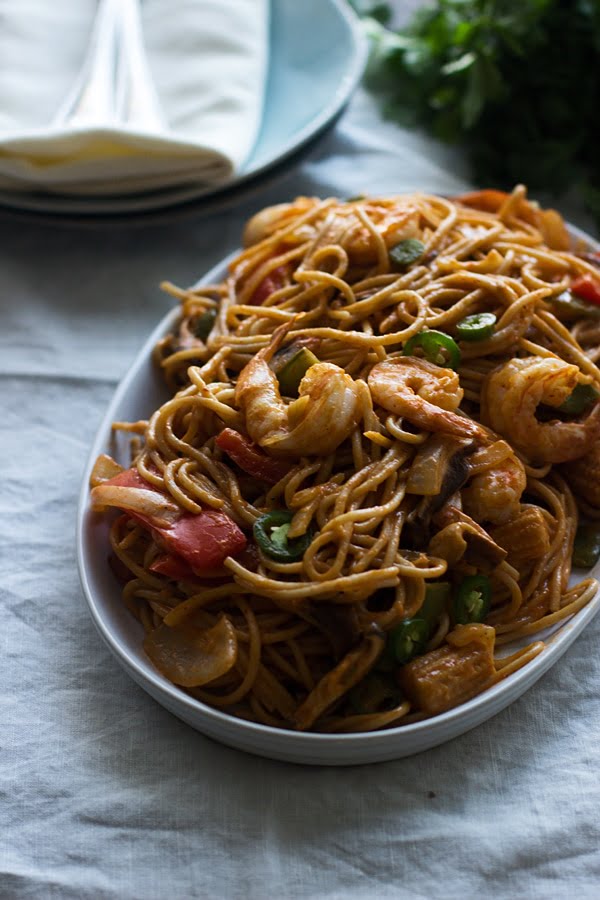 I think one of my favorite things about Asian cooking is that everything comes together quickly, making them perfect for hectic weeknights when your tired body just wants to give in and order takeout. In the time that you place your order, go pick it up or have it delivered, you’ll have already made these noodles and downed them in one fail swoop. 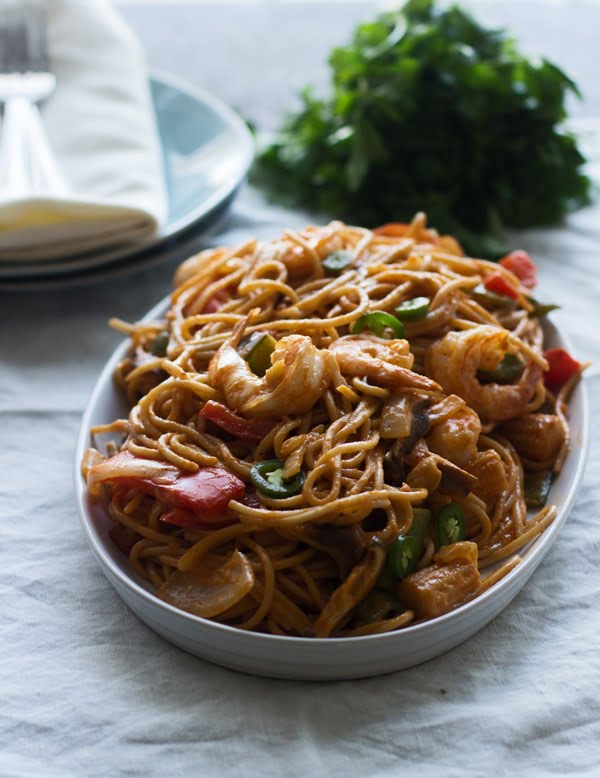