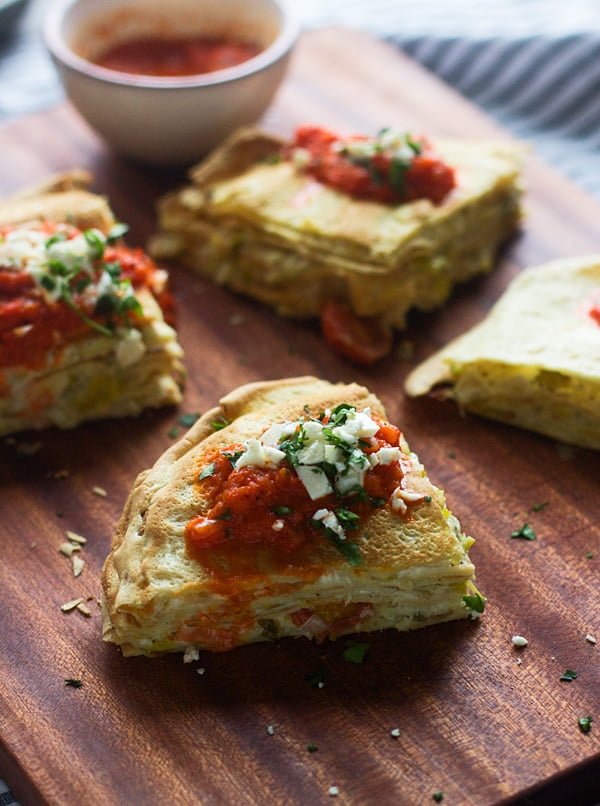 While I love my husband dearly and enjoy spending the majority of my time with him, my life wouldn’t be complete without a little (or a lot) of girl time. Girl time typically comes in the form of happy hour, it always includes food and wine, and eight times out of ten we wind up at this tapas restaurant where the food is cheap (during HH), the sangria is strong and a good time is guaranteed.

Also, most of our husbands hate tapas and can’t even fathom a restaurant that would serve small plates and expect them to be full by the end of the meal, so we must charge on without them.

Which has lead me to the conclusion that whoever invented tapas must have been woman, because only a woman could understand the magnitude of happiness ordering a ridiculous amount of food to share brings a group of girls. Or is this just my group of girlfriends?

I’ve noticed us getting some curious glances from waiters and other patrons when they see the sheer quantity of food getting delivered to our table, and even more concerned stares when they notice we’re going to finish it all…including the basket of bread which miraculously refills itself every fifteen minutes or so.

I swear, every time I leave there, I’m five pounds heavier. 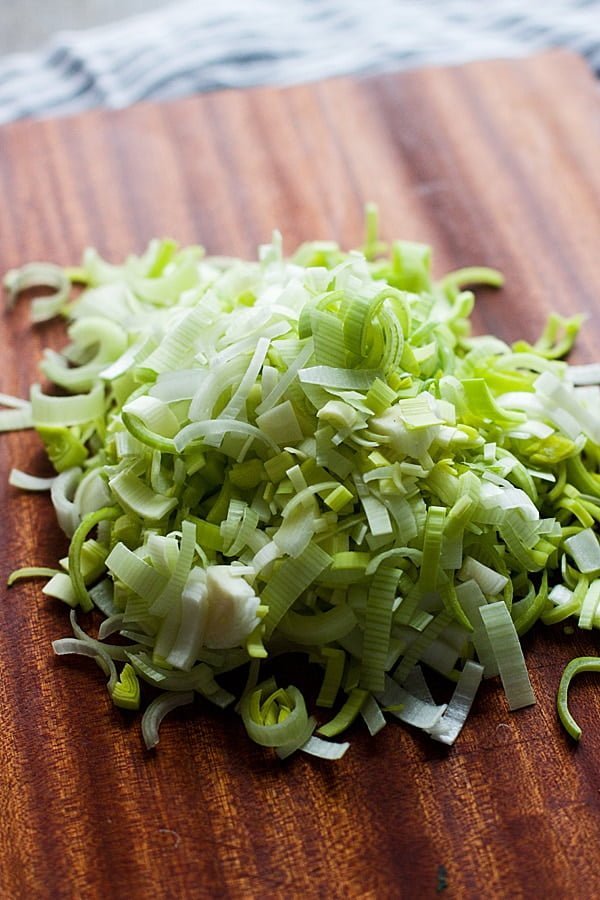 I’ve had pretty much everything on the menu at this point, and I adore it all, but there are a few dishes that really speak to my taste buds, dishes my stomach requires me to order every single time I’m there, no exceptions.

Do you see where I’m going with this?

Yep, I made my own version. I already dominated the baked goat cheese and have future plans to recreate the dates, so for today we’re focusing on crepes.

Seeing as I have literally no idea what the ingredient list consists of, besides what the titles implies, I completely went off my gut in my recreation. 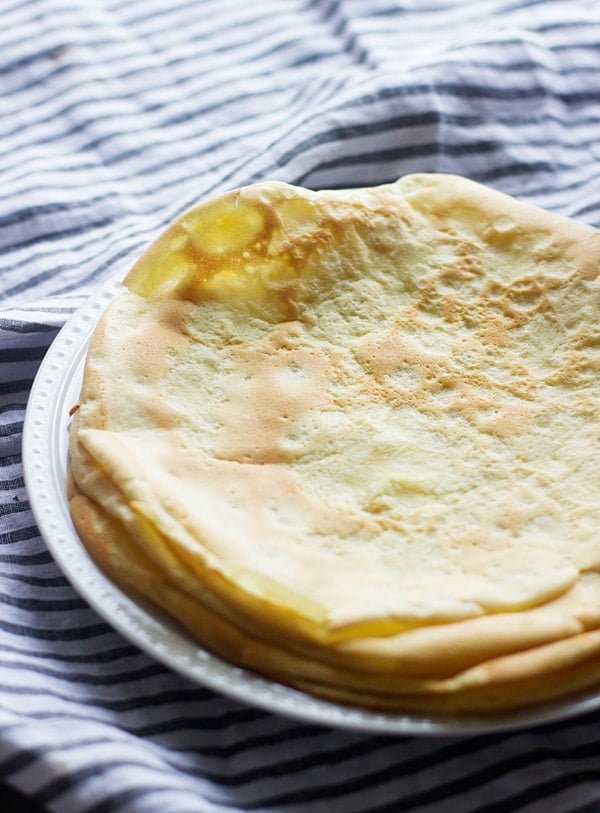 The filling, spelled out in the title is predominately made up of leeks and feta cheese, although I’m not sure if you can tell by looks alone, but there’s a ridiculous amount of cheese nestled in between those layers of crepes.

Three. Different. Cheeses. I know. Clearly it’s not light in the slightest.

Feta, for its rich, salty flavor.

Goat cheese, for tanginess and creaminess.

Mascarpone, for its mild flavor and creaminess.

If you don’t want to buy three different cheeses, I’d just stick with the feta and mascarpone, as the goat cheese isn’t a necessity, I just had it on hand, so I figured I’d throw it in there.

So first, two whole (large leeks) sweat in a little bit of butter until they’re super soft and translucent. I then hit it with a little bit of dry sherry, turn down the heat and slowly stir the cheeses in until the feta is almost completely melted. The filling is seasoned with a bit of salt and pepper and then it’s ready it go. 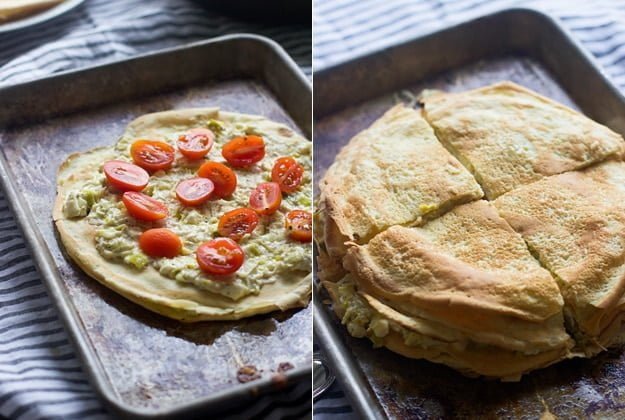 If you’re afraid of crepes, don’t be! I find them even easier to make than pancakes; for one, they don’t have to be perfect and two, they literally take seconds to make. No waiting for air bubbles to rise to the top, no fretting if the outside is crisp and brown but the inside is practically raw, and if you don’t pour enough batter in the beginning you can just add in a little bit more to fill in the gaps, no big deal. Here’s how I make them:

1. Start with a very hot medium sized non-stick skillet.
2. Take the pan off the heat and as you pour in the batter tilt the pan in a circular motion (clockwise or counterclockwise, doesn’t matter)
3. If there are a few holes, don’t worry about it, if you are worried about it, just fill in the holes with a few drops of batter
4. Once the edges start to crisp up and turn a golden brown, flip.
5. Done

Once the crepes are all made up, the filling is layered between them, they’re stacked up, popped into a 350 degree oven and baked until the filling is piping hot and the edges start to crisp up. The pie is cut into either four big slices or six medium slices and served with a super quick roasted red pepper sauce which I would escribe, but I’ve rambled on long enough. 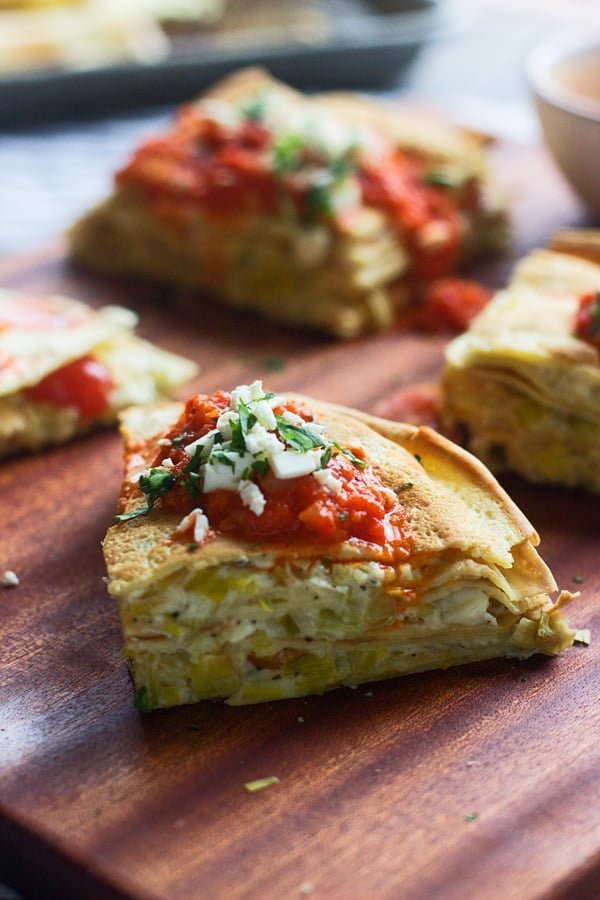 So rich. So cheesy.