END_OF_DOCUMENT_TOKEN_TO_BE_REPLACED

Thank you to our partner Oster for sponsoring today’s Eggnog French Toast post! We love teaming up with our favorite brands and hope you do too. 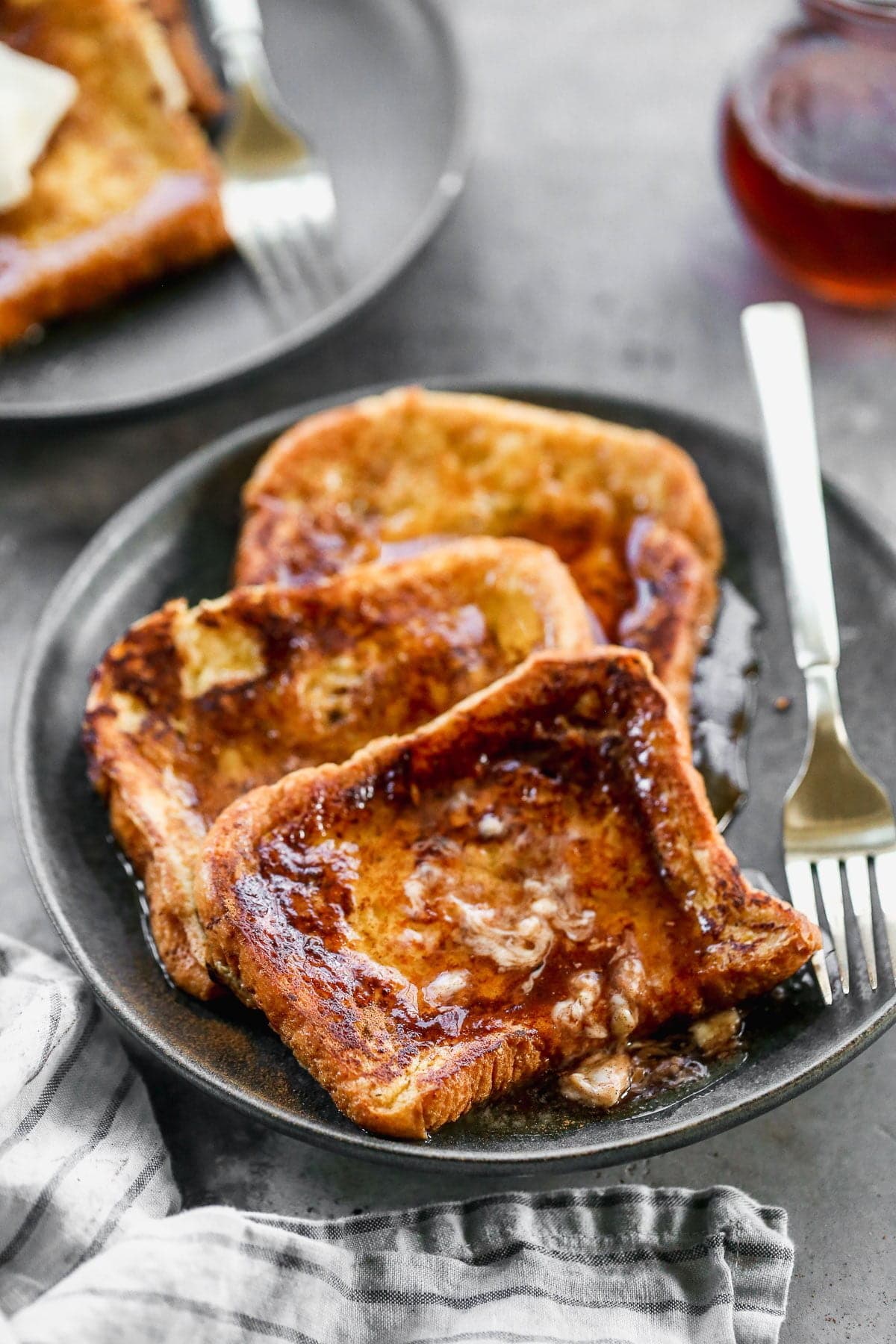 Even if you aren’t a fan of eggnog in the traditional sense (How could you not be?), I challenge you to find anything wrong with Eggnog French Toast. Already a custard in a way, eggnog has all of the makings for the perfect base of a French toast batter. The thick, sweet vanilla-laced mixture is like pure liquid gold in holiday form and soaks into buttery brioche slices seamlessly.

Beyond the eggnog foundation we also manage to sneak in an extra dose of vanilla, plenty of warm cinnamon and just a touch of orange zest for a bit of citrus and freshness. I’d also encourage you throw in a tablespoon or two of rum for good measure but that’s just me.

This easy-to-make recipe is the perfect holiday breakfast as it requires very minimal ingredients and takes less than 30 minutes to throw together. What makes things even easier is you can cook six slices of French toast at a time using Oster’s DiamondForce Nonstick Electric Griddle so you can crank those French toast slices up almost as fast as your family will inhale them. 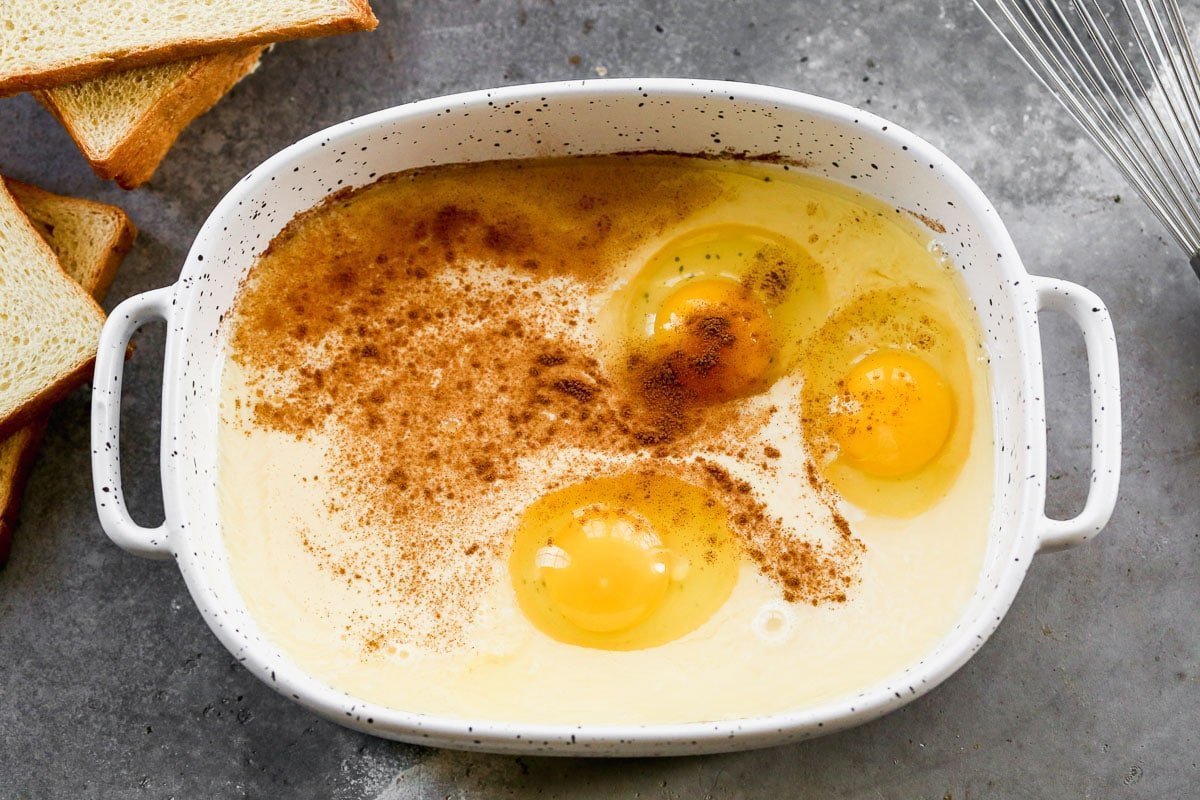 Eggnog. You can use your favorite eggnog here, any store-bought variety is great. Make sure to buy enough to have a little spiked cocktail with your Eggnog French Toast. It’s only the holidays once a year, let’s indulge!

Vanilla. Even though eggnog is sweet, I like to add a hint of vanilla as well. Make sure to use pure vanilla extract.

Cinnamon. Some eggnog brands already have cinnamon in them, the one I buy does not so I add in a good amount of cinnamon to spice it up. You could also add in a little pinch of nutmeg or swap out the cinnamon for pumpkin pie spice. Another really lovely and different spice would be a pinch of ginger or cardamom.

Orange zest. I love adding a little bit of freshness and orange zest does just that. It’s not a necessary ingredient but one I highly encourage.

Bread. Make sure to use a hearty bread. We use thick slices of dry brioche but you could also use Italian or ciabatta bread. 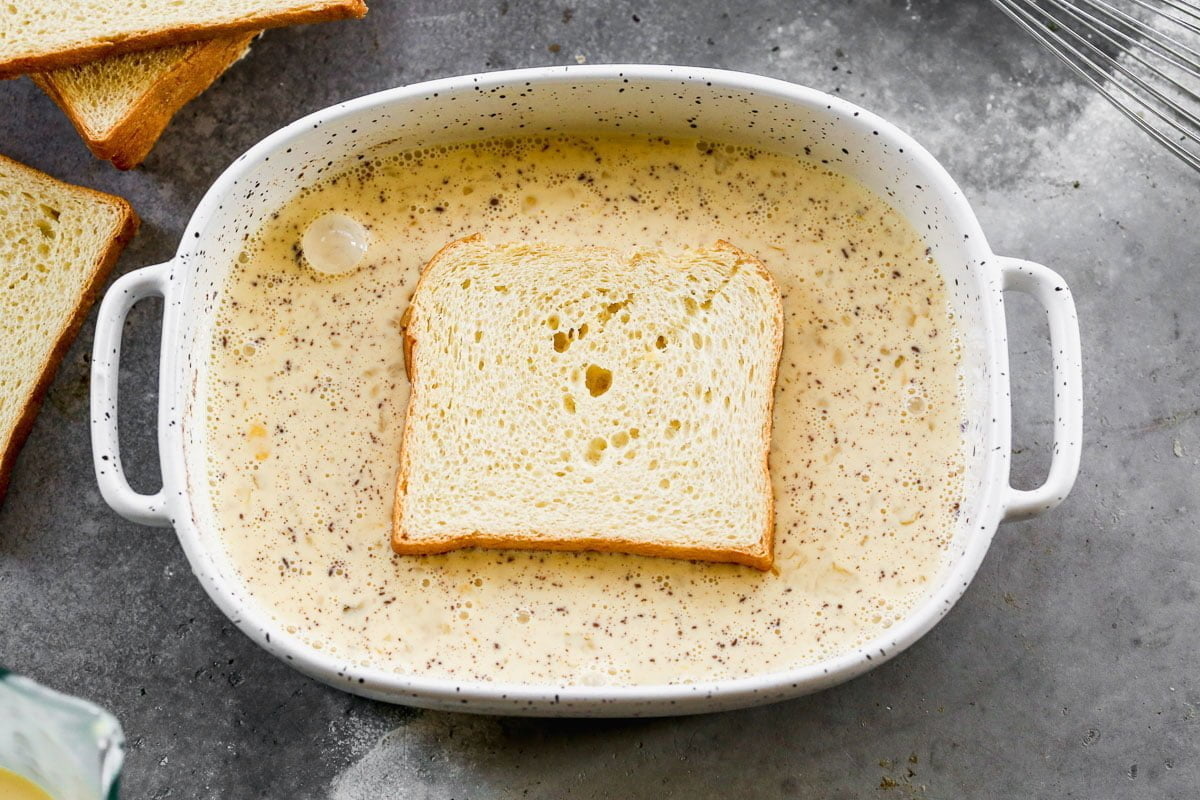 Dry the bread. Ideally if you’re using brioche which tends to be soft and soak up liquid quickly, you want the bread to be a day or two old and slightly dried out and stale. If your bread is fresh, you can put it in a 250 degree oven for about 10 minutes until it gets dry but not toasted. If you use a bread like ciabatta or a crusty aritsan variety you won’t need it to be dried out as much as those tend to be denser.

Make the custard. Add the eggs, milk, cinnamon, salt, orange zest and vanilla to a shallow dish. Whisk vigorously until the mixture is combined. Eggs can be stubborn to break so make sure you get in there and make the mixture really homogenous and smooth.

Soak the bread. Add two pieces of bread to the custard mixture and let them soak on one side until saturated, about 1 minute. Flip and do the same thing on the other side. 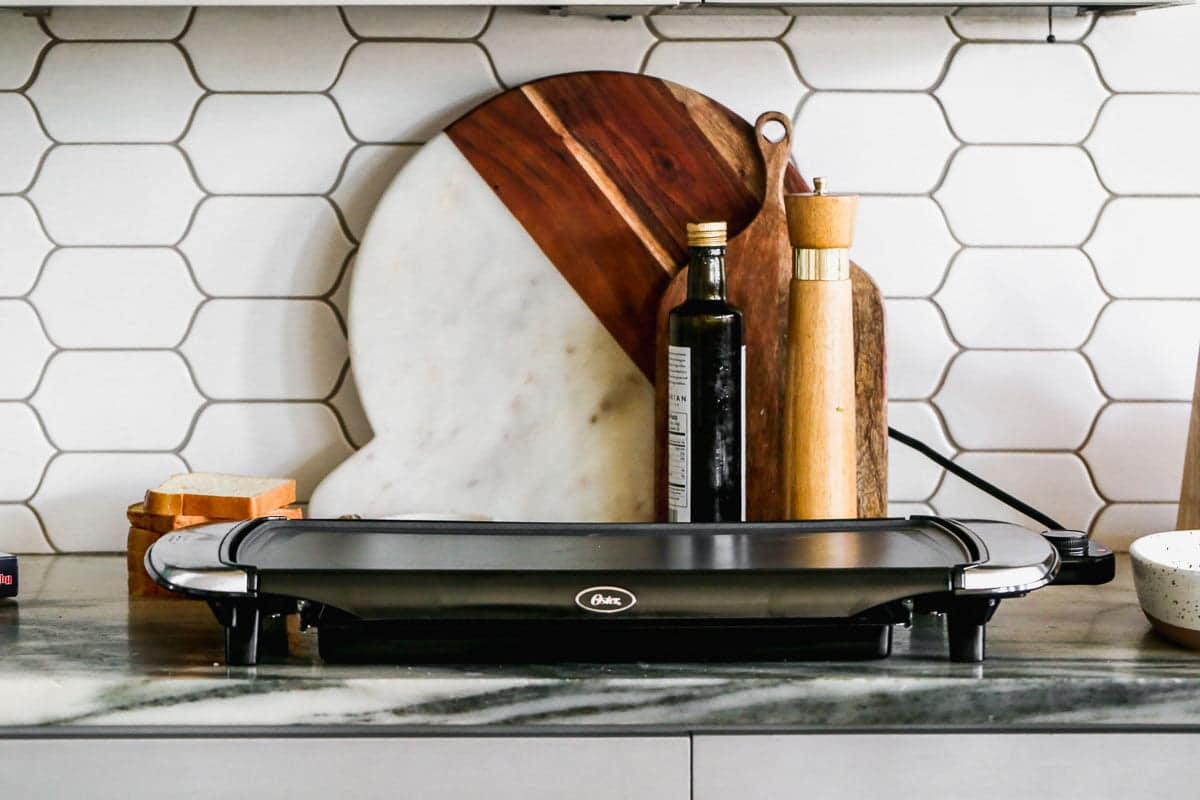 As we mentioned before we use our Oster DiamondForce Nonstick Electric Griddle to make our French toast, pancakes and more. I love that it frees the stove up and I can crank out French Toast slices and pancakes really quickly for guests.

Also a benefit? It’s non-stick capability, this means I don’t have to worry about crusty pieces of French toast sticking to my pan and I’m not required to use copious amount of oil or butter to cook anything. With that said, I do still really like to use a little bit of butter solely for flavor and to get that really lovely buttery crustiness on each side of the French toast.

Oster has been a long standing contender in the non-stick arena and this particular product, the DiamondForce technology is infused with diamond particles that form a structural matrix, creating a stronger coating for easy food release and superior nonstick performance over time. We love it!

Serve ’em up! We’re a pretty simple family so I don’t find it necessary to serve the Eggnog French Toast with anything fancy aside for some warm pure maple syrup. However, since it’s the holidays I’d also be down for a dollop of fresh whipped cream, some sugared cranberries and fresh orange zest. 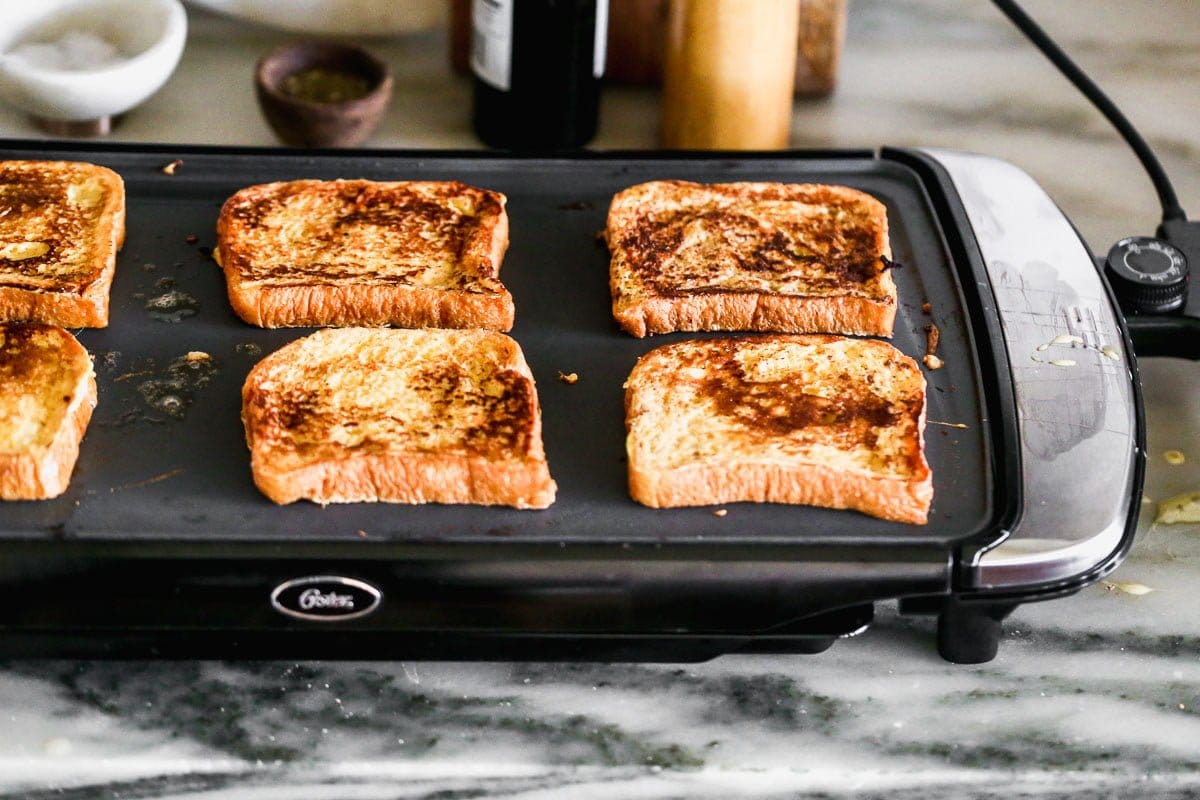 Do I have to use brioche?

You don’t. I personally love brioche because it feels indulgent and holiday-worthy, but any thick sturdy bread will work great. Again, if you use a crusty artisan bread you probably don’t need to let the bread dry out at all as it’s already pretty dense.

It does! It will get a little soggy and won’t be quite as crisp but it will still be delicious. 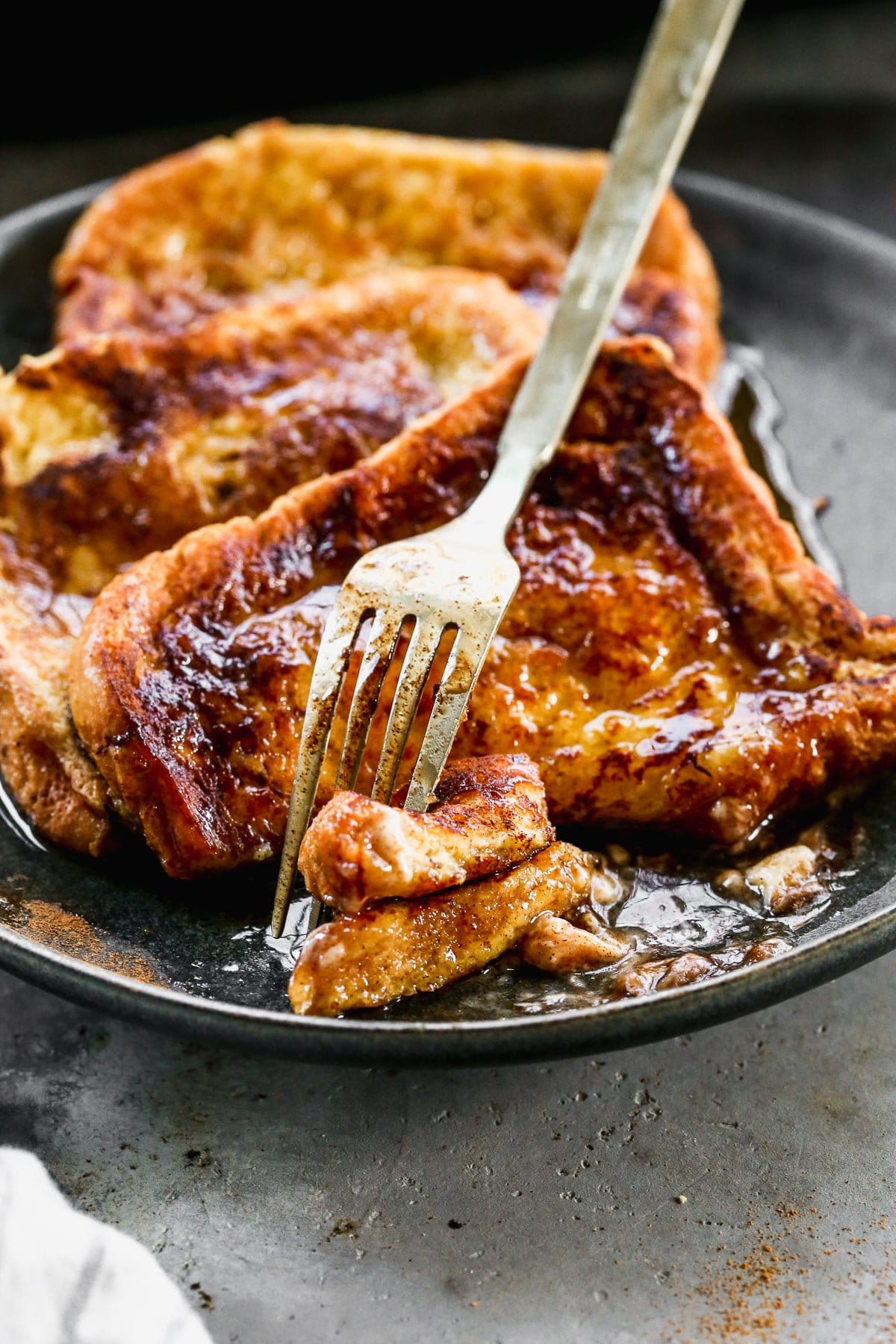 What to serve with Eggnog French Toast 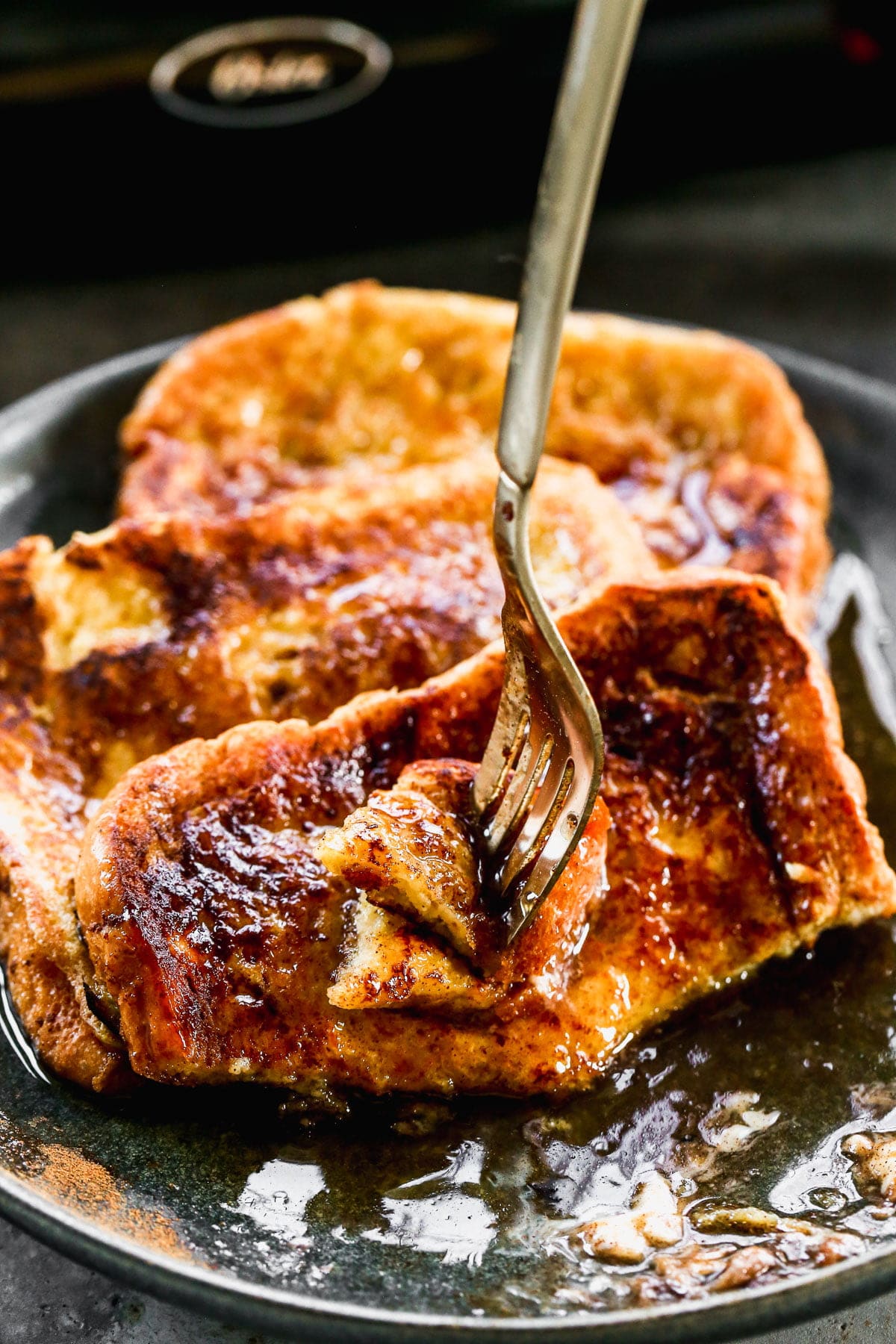 Print Rate Text Email
Even if you aren’t a fan of eggnog in the traditional sense (How could you not be?), I challenge you to find anything wrong with Eggnog French Toast. Already a custard in a way, eggnog has all of the makings for the perfect base of a French toast batter. The thick, sweet vanilla-laced mixture is like pure liquid gold in holiday form and soaks into buttery brioche slices seamlessly.
Prevent your screen from going dark
10 slices