If you’re under the impression that everything comes out of my kitchen looking beautiful and perfectly put together, let me ease your mind a bit and show you this… 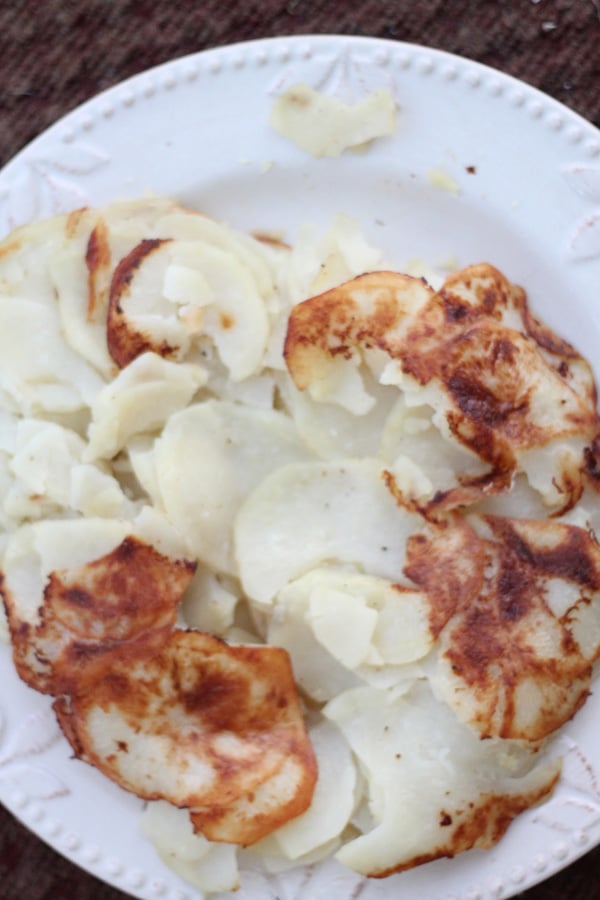 This was my (very) unsuccessful second attempt at a potato galette.

I’d previously made a mini potato galette for our Valentine’s Day dinner that was golden and crisp, with perfectly concentric potato circles layered ever-so carefully next to one another. It came out with little effort and looked quite elegant but was just a tad greasy for my liking. In an effort to make it “perfect,” I set out to reduce the oil and butter content and planned a subsequent attempt.. 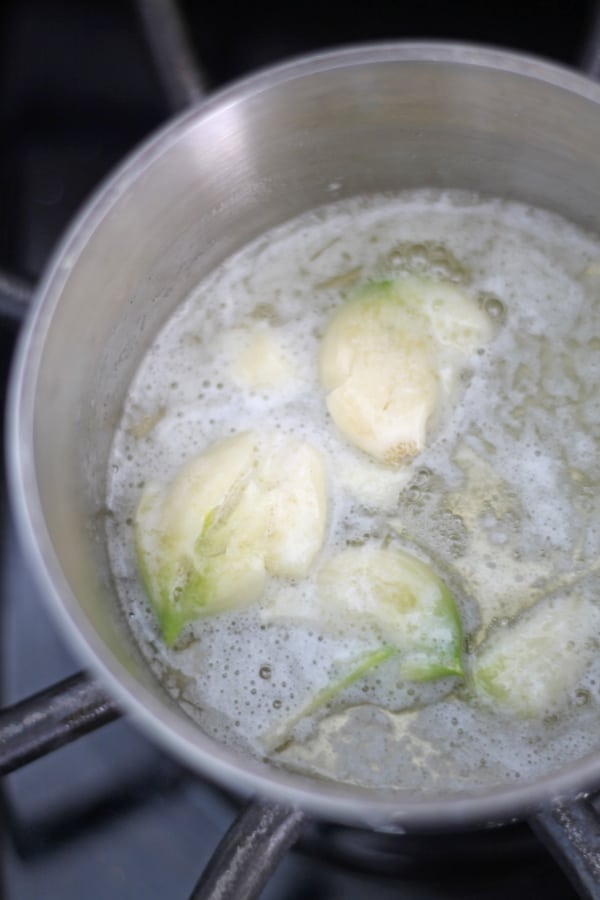 Apparently in my next try, I reduced the oil and butter too much because what resulted, as you can see above, was a potato galette that mostly stuck to the pan when inverted. Instead of gracefully sliding out in one swift movement, it fell out in sad potato chunks on to the pretty platter that was supposed to showcase the galette so beautifully. 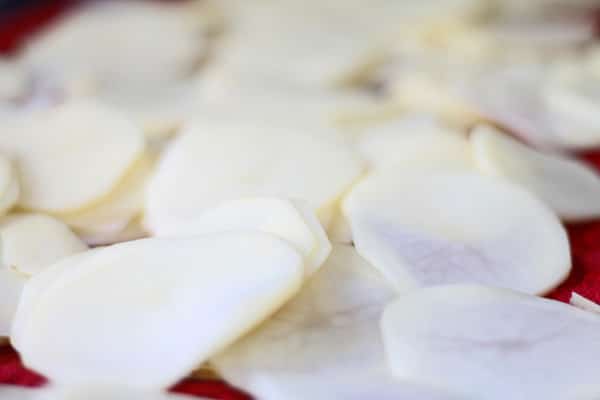 Now, there’s only so much time I have to photograph my food, courtesy of a few factors that keep me super busy, so to say the failure was a letdown doesn’t even cover it. I mean an hour of my precious time was taken away from me. An hour in which I could have made pasta, baked a cake, or played with my puppy. An hour I could have cleaned the house, picked out wedding invitations, or planned my next blog post. An hour I’ll never get back. (I might be acting a tad dramatic but it was disappointing …)

I set out to give it another try, and after a little bit of research, I came to the conclusion that the best way to coerce the potatoes to release without difficulty would be to use a combination of butter and oil – and – key factor— to use enough. This time, not one little morsel was going to stick if I had anything to do with it. 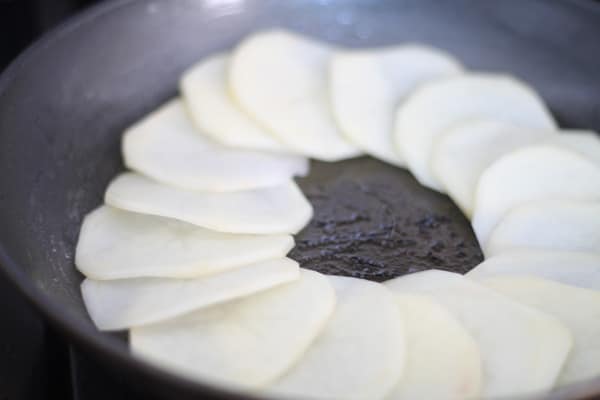 I started by infusing the butter and oil with a lot of garlic, then brushed a little onto the sauté pan – don’t be shy, we all saw what can happen when we hold back the ingredients that allow for easy release. Trust me here; you’ll want to cry big alligator tears if your potatoes come out all sad and broken like mine previously did.

Next, the layering begins.

There’s no perfect way to layer the potatoes, just start from the outside and work your way in, making sure they all overlap. The most important part of the prep process is to season each layer, pretty liberally. Potatoes are naturally very bland (as I’m sure you know) so they need quite a bit of help in the sodium department in order for them to taste as they should. 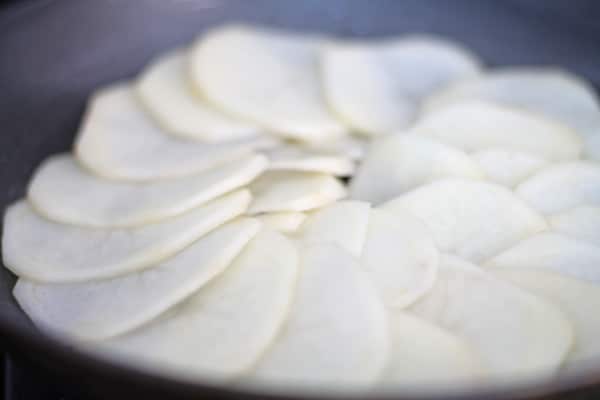 After the potatoes are seasoned with lots-o salt, sprinkle a little bit of grated parmesan cheese in between each layer. This step doesn’t necessarily make the galette “cheesy”, it just melts into the potatoes when cooking, making for a nutty salty bite that will test your tasters taste buds (try saying that three times) – in a good way.

Throw the whole pan into the oven and bake until the potatoes are cooked through, then hope and pray you added enough oil and butter to avoid a kitchen disaster. 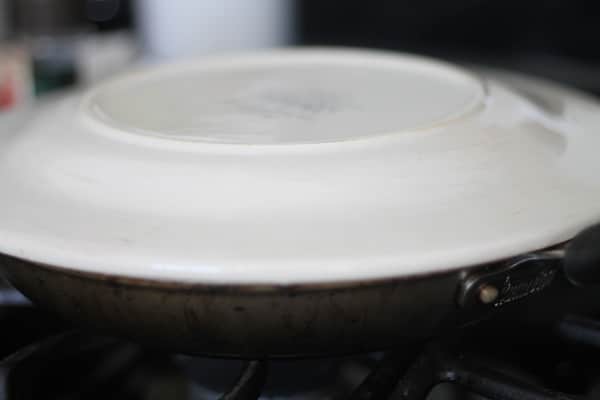 The moment of truth….. 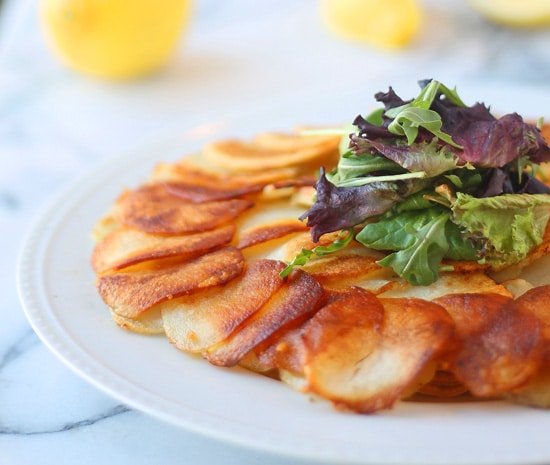