The Greeks have perfected the gryo, so as much as I’d love to recreate it at home, I’m self aware enough to realize that I couldn’t even come to close to replicating it, no many how many times I try. Instead, I thought it would be fun to come up with a totally different version that still resembles a classic gyro, but won’t leave me feeling like I’ve come up short. Enter: Healthy Chicken Gyros with Feta Tzatziki and Sweet Potato Fries. 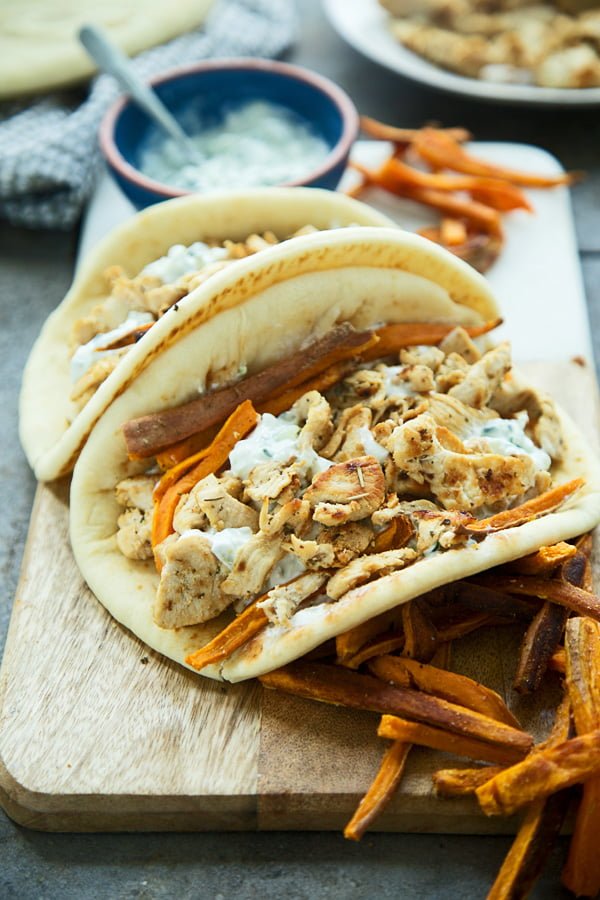 The fact that I’ve come up with not one, not two, but three different variations on the gyro might give you just a little bit of insight in to how much I love them, but out of all of them, this chicken version is probably about as close as you can get to the original. While it still has many of the flavors of the original with lots of garlic, rosemary and oregano, I swapped out the classic combination of beef and lamb for the healthier and quicker cooking option of chicken breast.

Classically, the beef and lamb is shaved from a giant rotisserie, which I obviously do not have access to, so to mimic that texture, I partially froze the chicken breasts and then used a super sharp knife to slice the meat as thin as I possibly could. From there, the “shaved” chicken gets marinated in a mixture of lemon juice, olive oil, garlic, dried rosemary and oregano.

Normally I like to marinate chicken for at least two to three hours, but since it’s sliced so thinly, the marinade penetrates the flesh in a fraction of the time, making this a dinner that’s not only healthy, but quick to make. 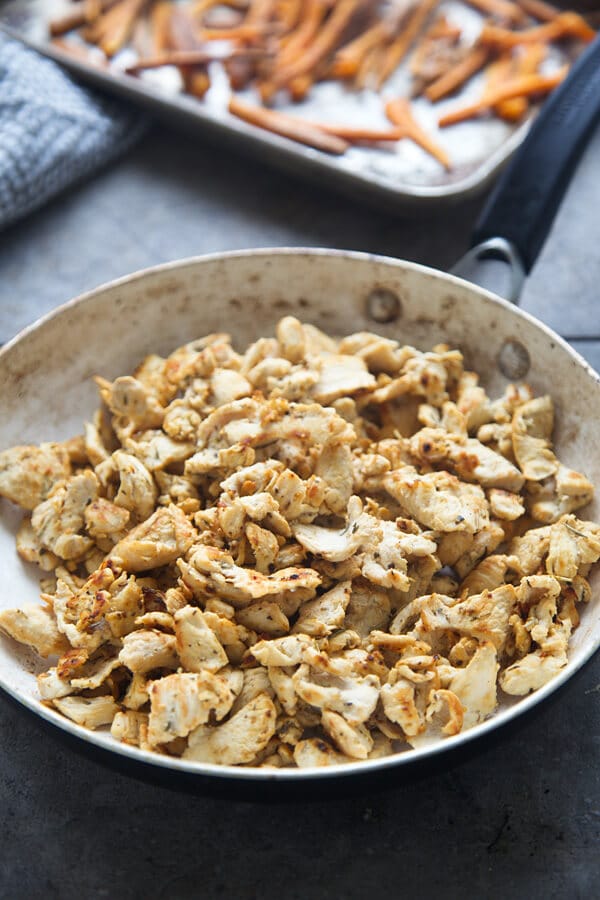 While the chicken marinates for 15 minutes or so, I get started on the sweet potato fries. Now, if you’ve ever been to Greece then you know, ninety-nine percent of the gyro vendors serve theirs with French fries tucked inside the pita along with the gyro meat. It’s something I was aware of before going to Greece, and was also something I thought I wanted no part of, but I ate my own words when I tried it, because it’s good, really good.

It’s actually pretty shocking to me that more gyro places in the United States haven’t adopted this procedure, especially since we’re the archetype for taking ordinary foods to the next level when it comes to indulgences. So for now, my knock-off version will have to suffice. 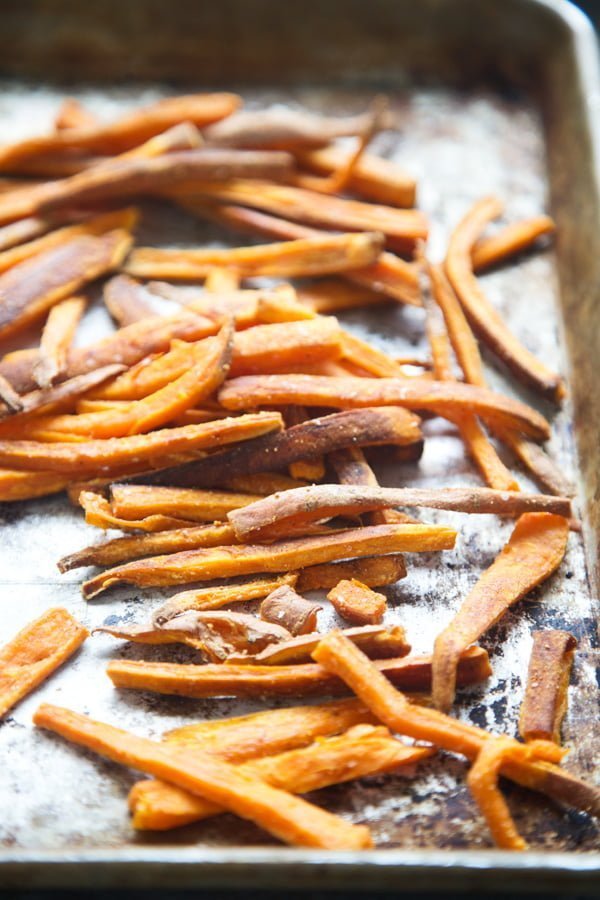 My method for baking sweet potatoes is pretty straight-forward. I toss the cut sweet potatoes with a few teaspoons of cornstarch and when it’s evenly coated, toss them with a few tablespoons of olive oil. Because olive oil was used in the marinade and again when the chicken is cooked, I wanted to stick with the same type of oil, but you could also swap out vegetable or coconut oil if you prefer.

The potatoes are evenly spread out on to a large, rimmed baking sheet, then popped in to a 375 degree oven for about 12 minutes until they start to brown up. Because sweet potato have a tendency to burn, you really want to watch them and make sure you toss them after 12 minutes. Also, I like to season them about three-quarters of the way through the cooking process, because if you season them before, they don’t crisp up as well. Here, we seasoned them simply with a little bit of garlic powder and salt.

Once the chicken is done marinating, it gets dried off, then cooked in batches in a little bit of olive oil. The reason you want to cook in batches is so the meat gets a nice golden sear on it, if you overcrowd the pan, the meat will just steam instead of sear. 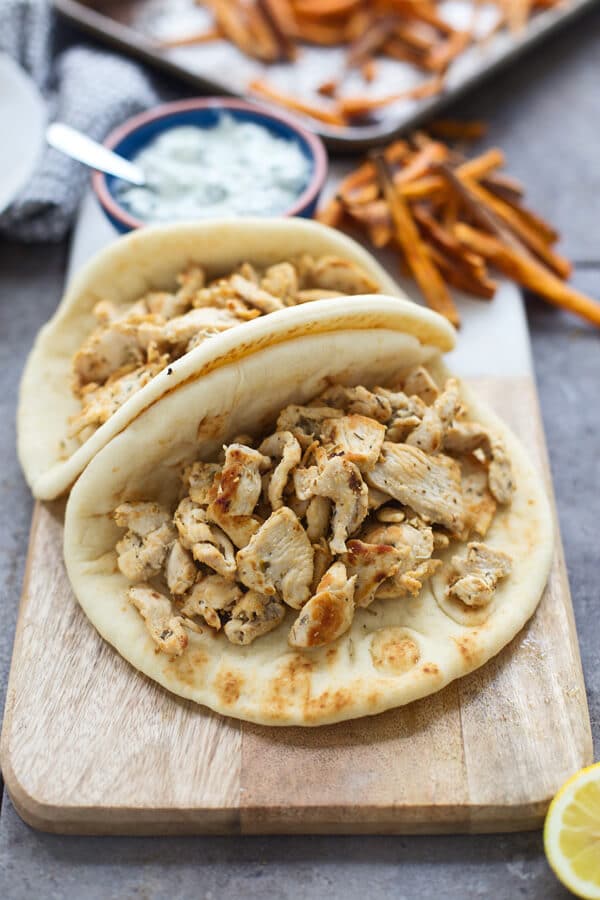 Once the meat is cooked, a generous portion is tucked into warm pita bread, stuffed with sweet potato fries and then covered in a super easy tzatziki sauce.

I like to serve these with a super simple Greek salad, but honestly, they’re super hearty on their own, so no side is necessary. 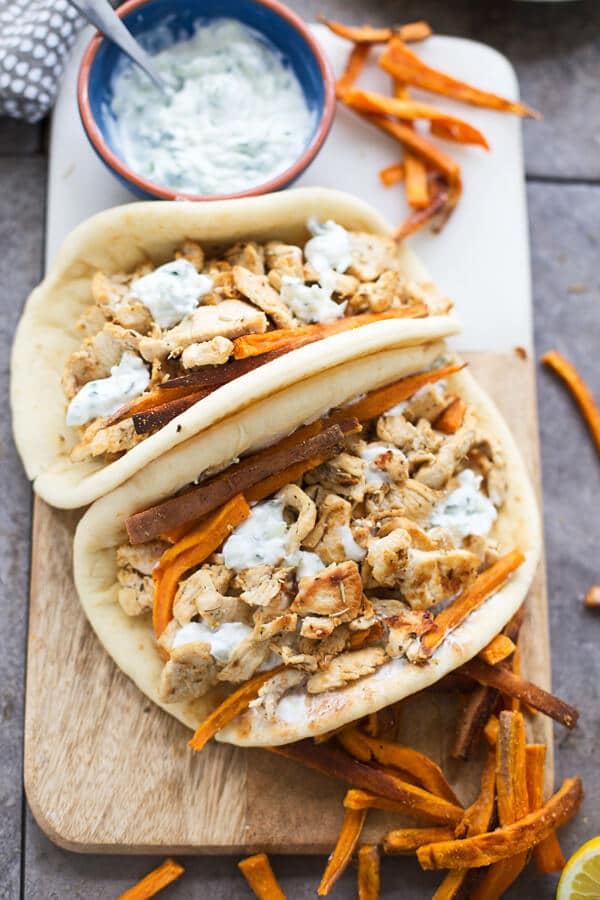 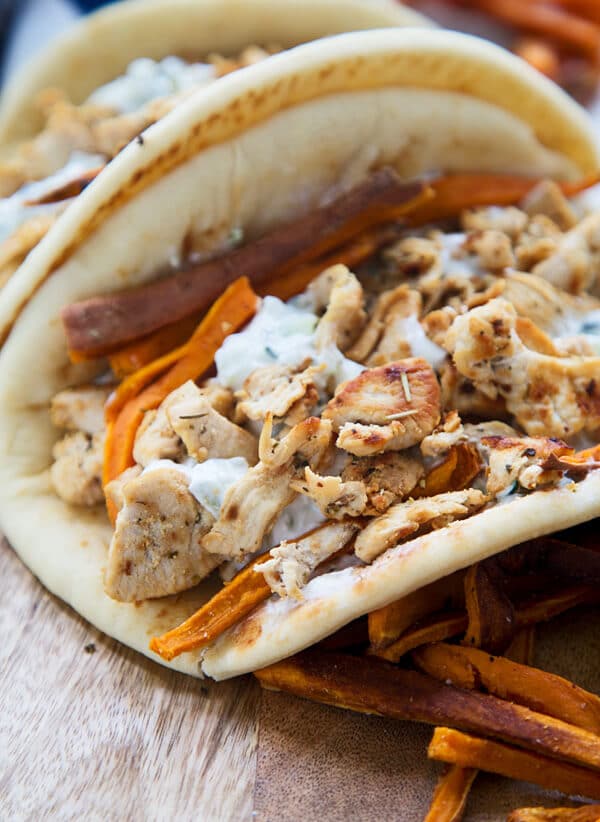 Print Rate Email
These Healthy Chicken Gyros with Feta Tzatziki and Sweet Potato Fries have all of the flavors of a classic gyro, but take a fraction of the time to cook and are made infinitely healthier with chicken breast in place of lamb and beef.
Prevent your screen from going dark
8 gyros