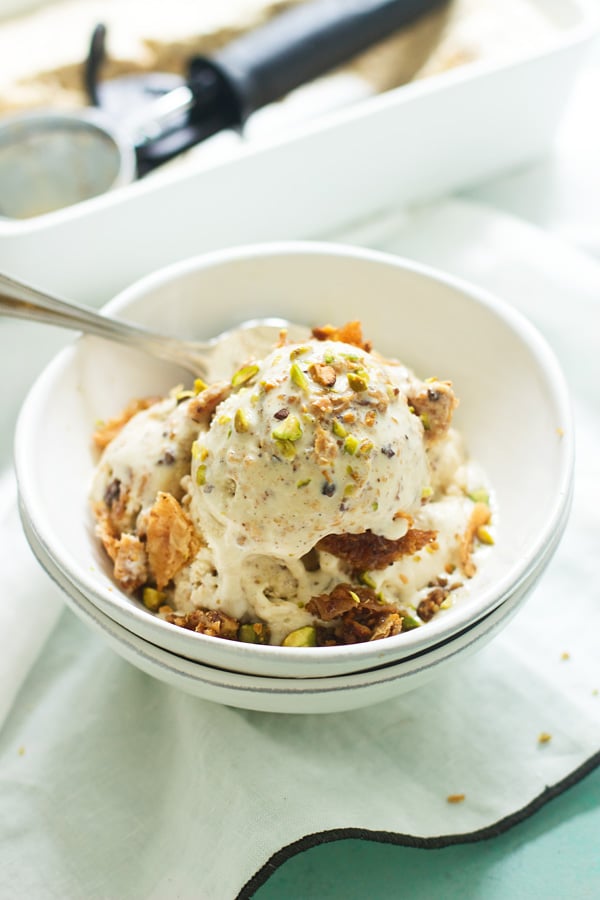 If I had a dollar for every time I’ve been asked, “Where do you get your inspiration from?” I’d be one rich chick. The truth is, inspiration comes from everywhere, literally. Smells, books, restaurants, travel, color palettes, television and random spurts of inspiration are just some of the ways ideas materialize in my head. It can be 2pm in the afternoon or 2am in the morning, it doesn’t matter what time of day it is, where I go or what I do, I’m constantly thinking about food and feeling inspired. 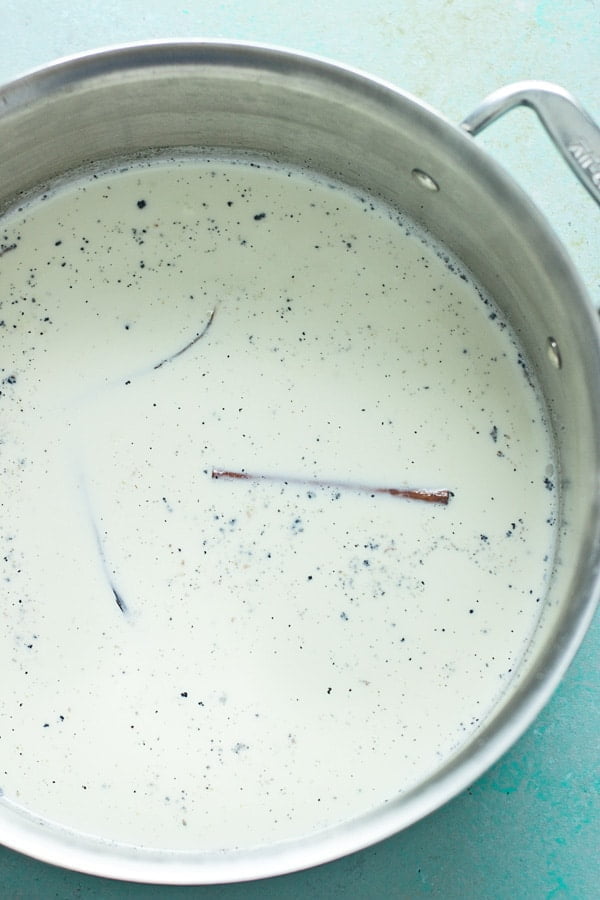 Inspiration for today happened a few months back when I went out to a Greek restaurant with a bunch of my girlfriends – one where belly dancers take stage and breaking plates at the end of the meal is actually acceptable. At the time we were the youngest group of all girls in the family-heavy restaurant, so naturally the 80-something year old owner took an interest in our table by showering us with ouzo and generously providing a couple of desserts for the entire table. Of course, the downside to being the only pregnant girl in the group is I had to skip out on the, but the upside to being the only pregnant girl in the group is that everyone was much more interested in the free liquor than the free desserts. So I did what anyone would naturally do when taunted with off-limits free liquor, I drowned my sorrows in dessert.

At first glance, I wasn’t overly impressed with the dessert they gifted us; it was merely a puddle of vanilla ice cream with chopped up baklava on top, not exactly earth-shattering stuff. But then…I took a bite, and holy cow. Dessert heaven. Now, I’ve been a fan of baklava since I was a little girl, but the combination of baklava and ice cream was pretty out of this world. 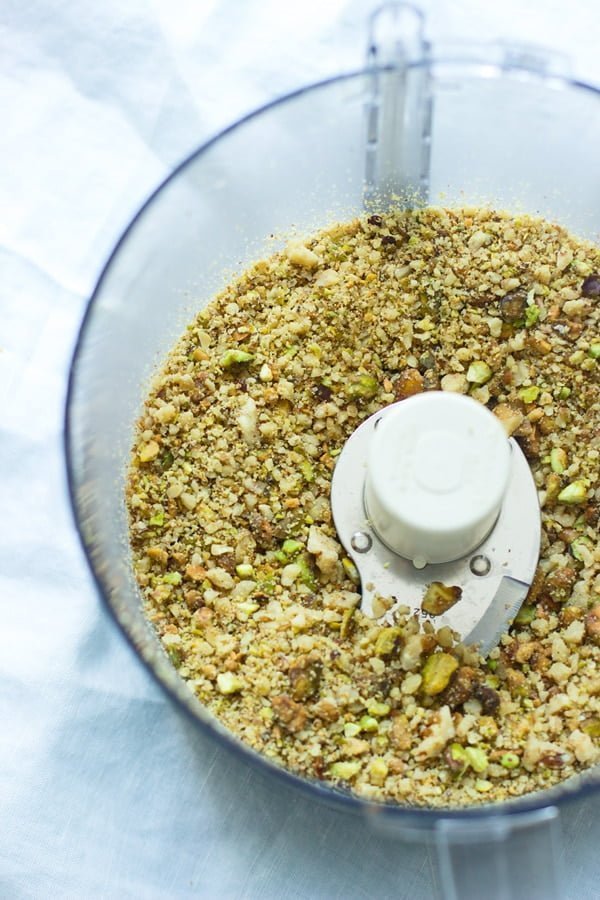 I could have simply replicated the dessert at home by buying store-bought vanilla ice cream and baklava, but what I thought would be even better? An actual baklava ice cream…made from scratch, of course.

Now, I won’t lie to you, this is a somewhat labor-intensive process, not difficult by any means, but it’s definitely something you’re going to have to set aside some time for. 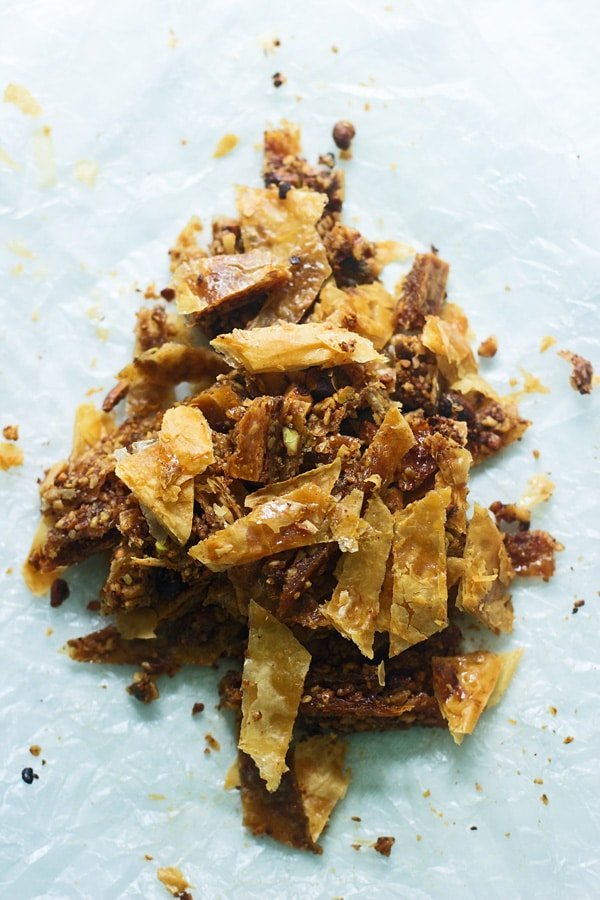 I stuck with the same ice cream base I typically use when making homemade ice cream which is a two to one ratio of whole milk to cream, sugar and egg yolks. I like this combination not only because it takes down the fat just a touch, but isn’t as heavy as a 100% cream based ice cream. After that, the flavor combinations are endless, but here I really wanted to keep the base simple, but also incorporate some of the flavors of baklava, so I added in one whole vanilla bean and a cinnamon stick to really infuse the custard.

To start, the milk, cream, vanilla and cinnamon are heated up in a saucepan to just under a simmer, in the meantime, the sugar and egg yolks are whisked together in a separate bowl until they’re light and fluffy. Once the milk mixture comes to temperature, about half of the milk is whisked into the egg and sugar mixture to bring the temperature up and prevent the eggs from curdling. It’s then whisked back into the remaining milk and cream. 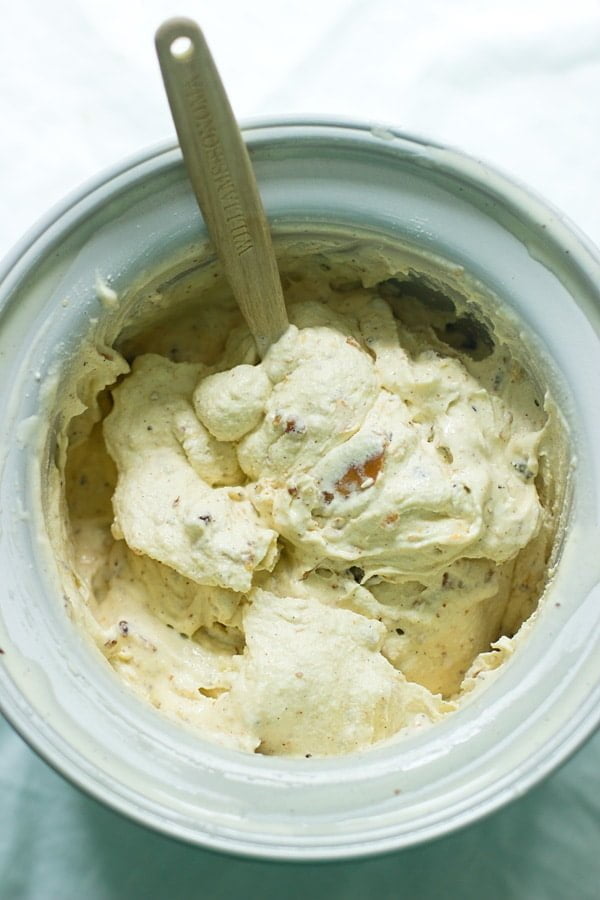 Here is where most people lose their patience and forever swear off ice cream making, so pay attention closely. Once you whisk the eggs into the hot milk, the temperature needs to be turned down to a medium-low to low heat, and needs to be stirred with a wooden spoon almost constantly. If the temperature of the mixture gets too hot, the eggs will curdle and you’ll have to start all over. Patience is key here. I’ve made homemade ice cream a hundred times, so I have a pretty good gauge on when it’s ready, but if you’re nervous, buy a candy thermometer, and once the mixture reaches 170 degrees, take it off the heat. The custard should be able to coat the back of a spoon, and when you draw a line through it horizontally, the two sides should stay in place.

Once the mixture comes to temperature, I immediately transfer it to a chilled bowl sitting over ice water. It gets popped into the fridge and chilled overnight. 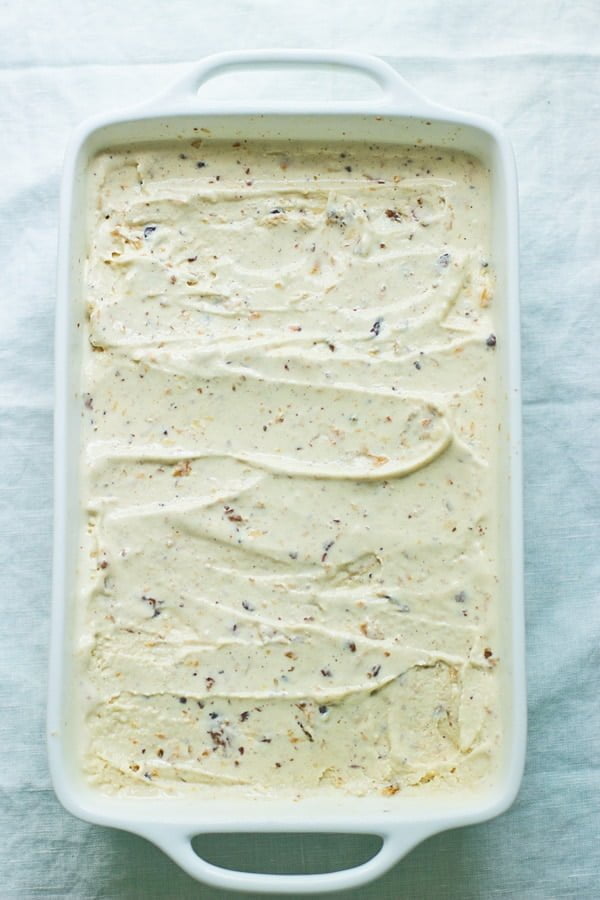 While the custard portion of the ice cream chills, I make the baklava portion, which is just a condensed variation of my favorite baklava recipe. Layers of phyllo dough are brushed with butter, then sprinkled with a pistachio, walnut and cinnamon mixture, cut into squares (the shape really doesn’t matter because we are going to crush the baklava once it’s baked) and baked until the dough on top is golden brown and crispy. Immediately upon coming out of the oven the hot phyllo and nuts are drowned in a lemon and honey simple syrup and let to sit overnight so the syrup can seep into every single crevice of the dough and nuts. 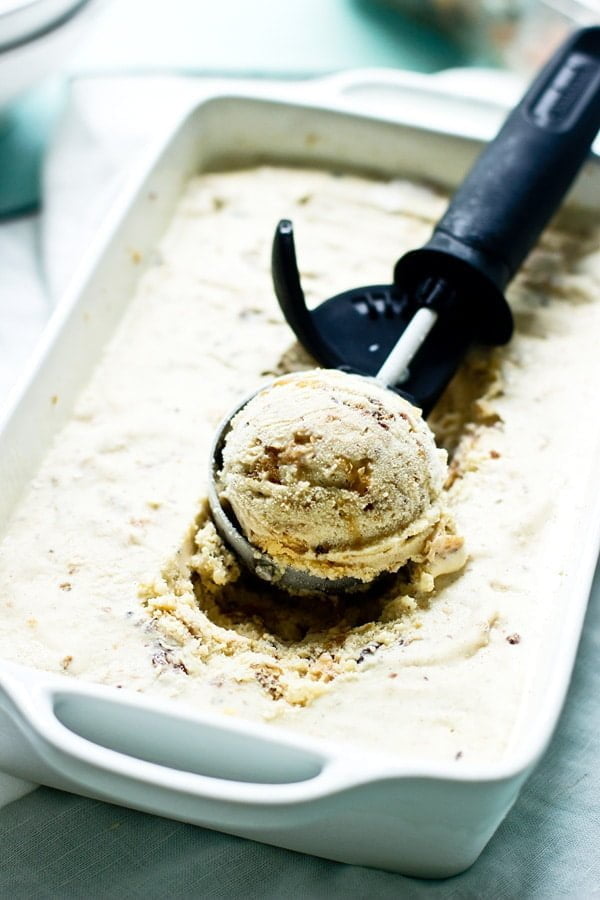 As you can see, you have to start the day before since everything needs to chill out overnight, but the good news is, you’re pretty much good to go after that point. The next day, all you have to do is dump the custard into the ice cream maker, turn it on and once it’s almost fully formed, the baklava is broken up into different sized pieces and sprinkled into the ice cream while it’s still churning.

Again, I know this seems like a ton of work for little reward, but the time and effort is SO worth it. This is literally one of the best ice creams I’ve ever made, let alone, tasted in general, plus where on earth can you get baklava ice cream??? NO WHERE.

You might be cursing me during the process, but trust, me, you’ll thank me later!! 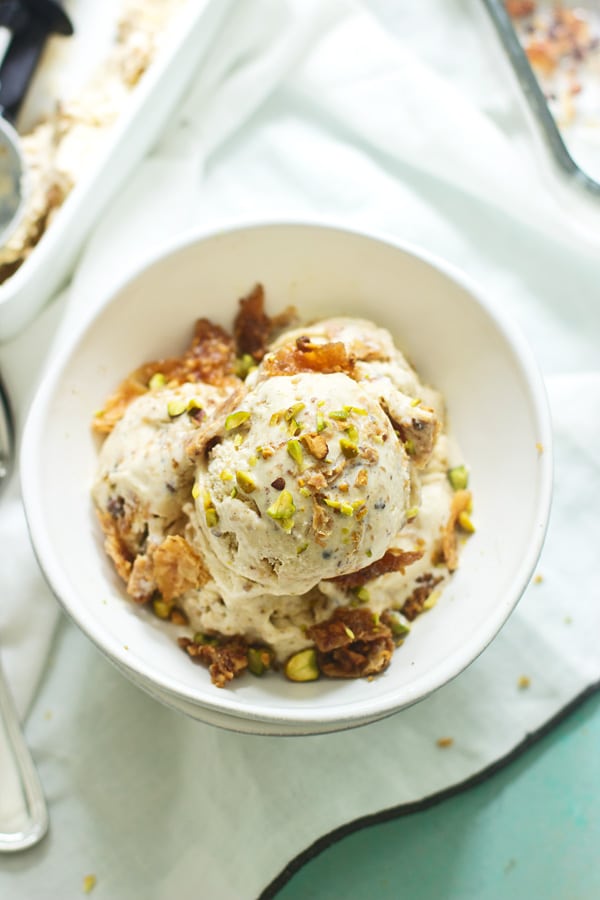 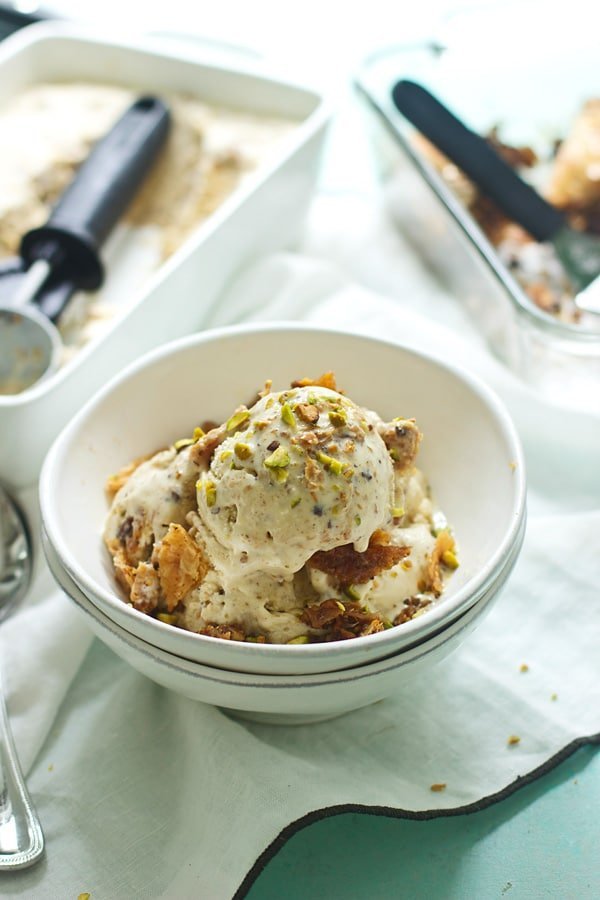