Some people believe there’s a correlation between beautiful food and difficult food. However, I don’t believe the two go hand-in-hand, and today’s Pan-Seared Pork Chops with Apple Cider Cream Sauce prove it. We brine and then pan-sear pork chops until golden brown and juicy, then simmer them in a brown butter apple cider cream sauce and fried sage leaves. 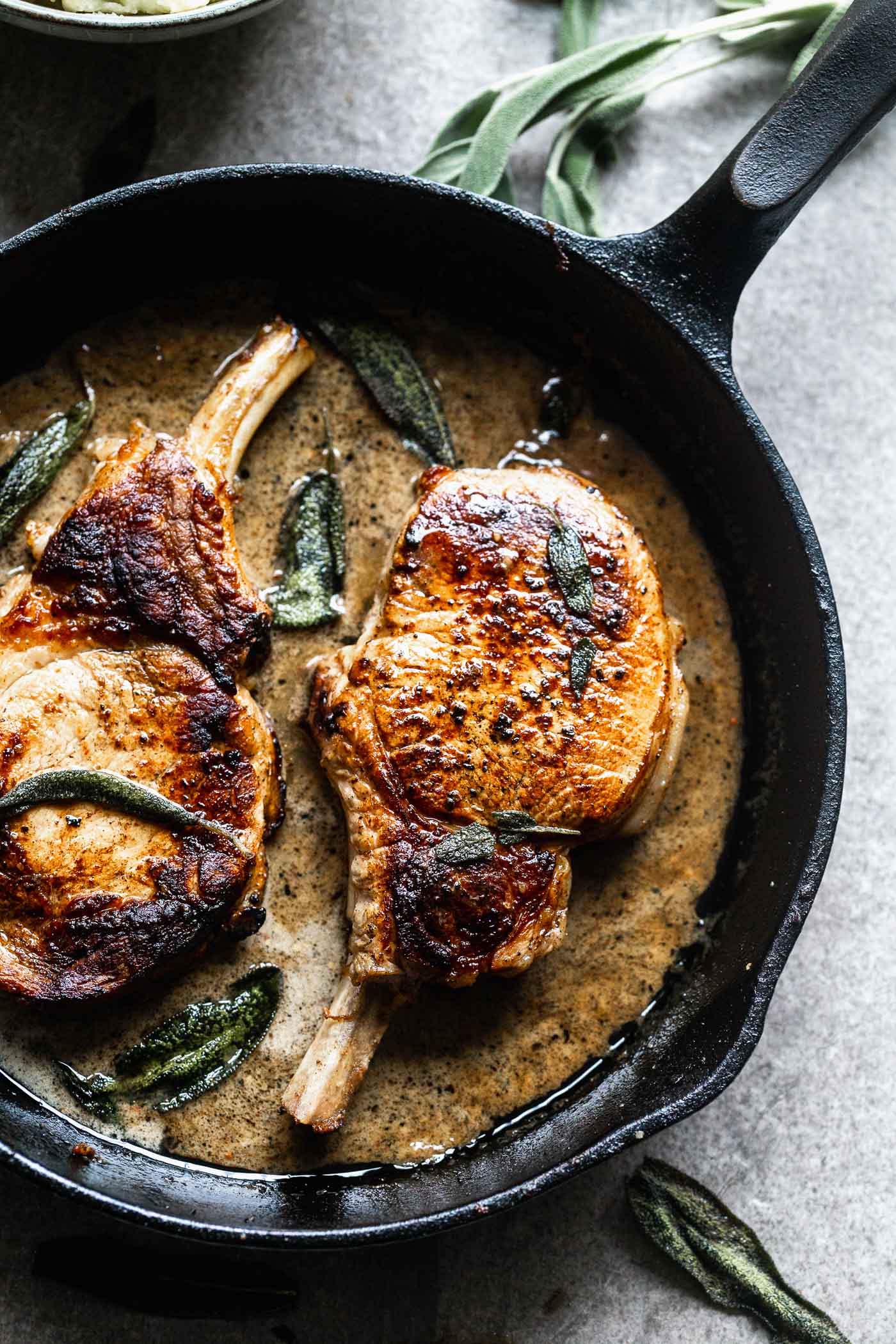 It doesn’t take a discerning eye to immediately notice the beauty of our Pan-Seared Pork Chops with Apple Cider Cream Sauce. The golden brown crust. The glistening flavor-flecked sauce. The crispy fried sage leaves. It’s all quite visually stunning. And while yes, this meal is in my opinion, beautiful, it’s actually quite simple to put together. Which is what makes it a true winner.

With hints of nutty brown butter, fried sage and apple cider, it’s also a meal which fits perfectly into the lineup of other fall/winter goodies happening this time of year.

We brine bone-in pork chops (bone-in is important!), and then are sear them in brown butter in a cast-iron skillet. To make sure they don’t brown too much before cooking through, we pop them into the oven to finish cooking.

When they come out, we throw in apple cider, tangy mustard, and a splash of cream to bring the dish full circle. Spoon the sauce on top, sprinkle with fried sage leaves and DIG IN.

Aside from the brining process (which isn’t really mandatory, more on that later), the meal comes together in about 30 minutes, or less. It’s honestly one of the easiest, most impressive meals you make this winter. 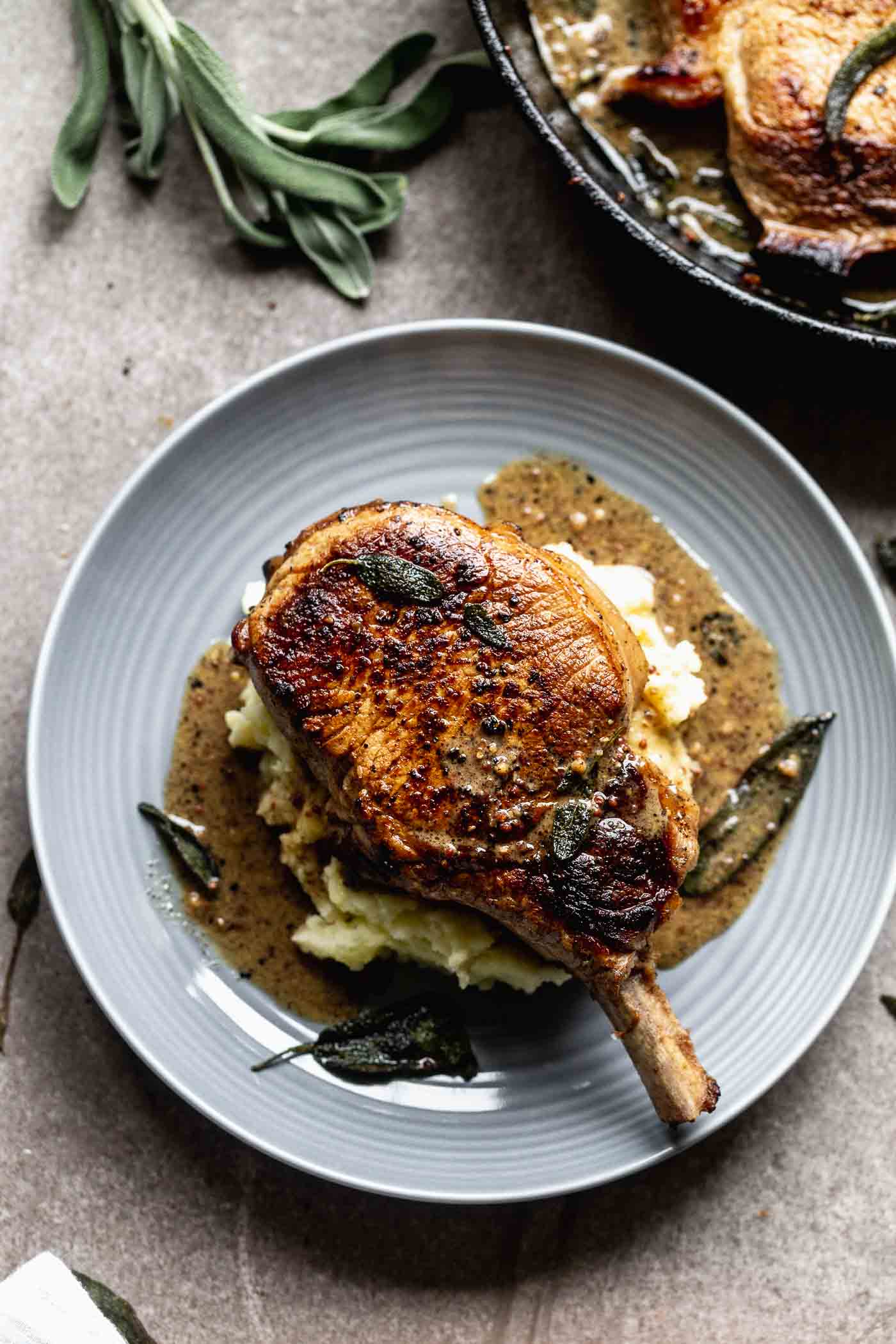 Pork chops. You want to use bone-in pork chops for two reasons. First, they’re pretty. Second, anything with a bone in it is going to come out juicer than if it didn’t. Pork can easily dry out, so it makes sense too simply leave the bone in.

Sage. The combination of brown butter and sage, in my opinion, is one of the great ingredients pairings in this world. One of my very favorite flavor combinations of all time is brown butter and sage. I’ve used the combination in tons of recipe over the course of this blog’s life, a few of my favorites – this Five Ingredient Faux Roasted Chicken, this Pomegranate Roast Chicken and this Butternut Squash & Spinach Lasagna. Sometimes the flavor is in your face (which I love), and sometimes it’s more subtle, like today (which I also love).

Apple cider. Just like pumpkin, apple cider seems to inadvertently fall into the sweets category more often than not, but it also makes a lovely addition to a bevy of savory foods. Here, we use it in two ways. First to brine the pork chops. And second, as a balancing act between tangy whole-grain mustard and acidic apple cider vinegar in the sauce.

Dijon mustard. Dijon mustard adds a nice tang to the sauce and pairs nicely with the apple cider.

Cream. You’ll want to use heavy cream and not half and half or you risk the sauce curdling.

Sugar. A little sweetness is needed to balance out all the acid. You could also use honey or maple syrup as well.

If you’re not familiar, brining is a way to infuse plenty of moisture AND flavor into meat. It’s typically an almost equal part of liquid to salt and sometimes sugar. Here’s our lineup:

Because pork chops weigh less than a pound, it’s really not necessary to brine them longer than an hour or two. Mine sat in the solution for about an hour, and they came out SO moist and flavorful. While I do recommend the brining process, you don’t HAVE to do it. Because the meat doesn’t cook for a very long time, you shouldn’t end up with pork chops that have the texture of beef jerky if you cook them correctly. 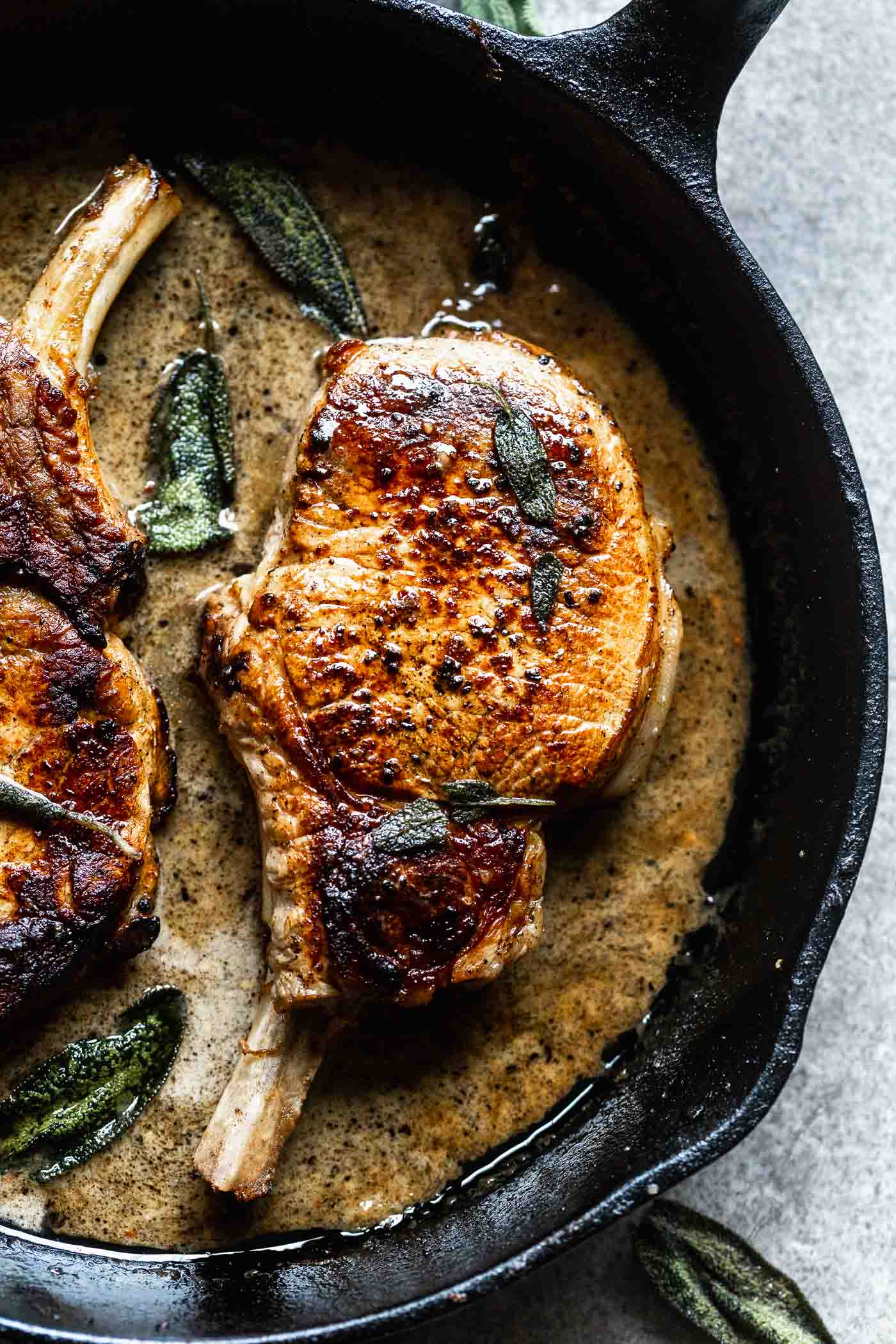 How to cook pork chops on the stove

If you’re afraid of cooking pork chops, don’t be. It’s honestly very similar to cooking any other kind of protein, but just like chicken, they have a tendency to dry out rather quickly, so try to avoid overcooking.

Although, first thing’s first. I HIGHLY recommend using a cast-iron skillet. It sears protein SO well, and unlike a normal sauté pan, it’s hard for anything to stick to it. I have one very similar to this

, and it’s something I use almost daily.

After you pull the pork chops out of the brine, you’re going to want to pat them completely dry – another essential step in a perfect sear. If there is too much residual moisture on the meat, it’s not going to get the golden brown crust you see in the photos. When the meat is dry, season with lots of salt. Don’t be shy! A well-seasoned piece of meat is the difference between a bland and stellar end product. 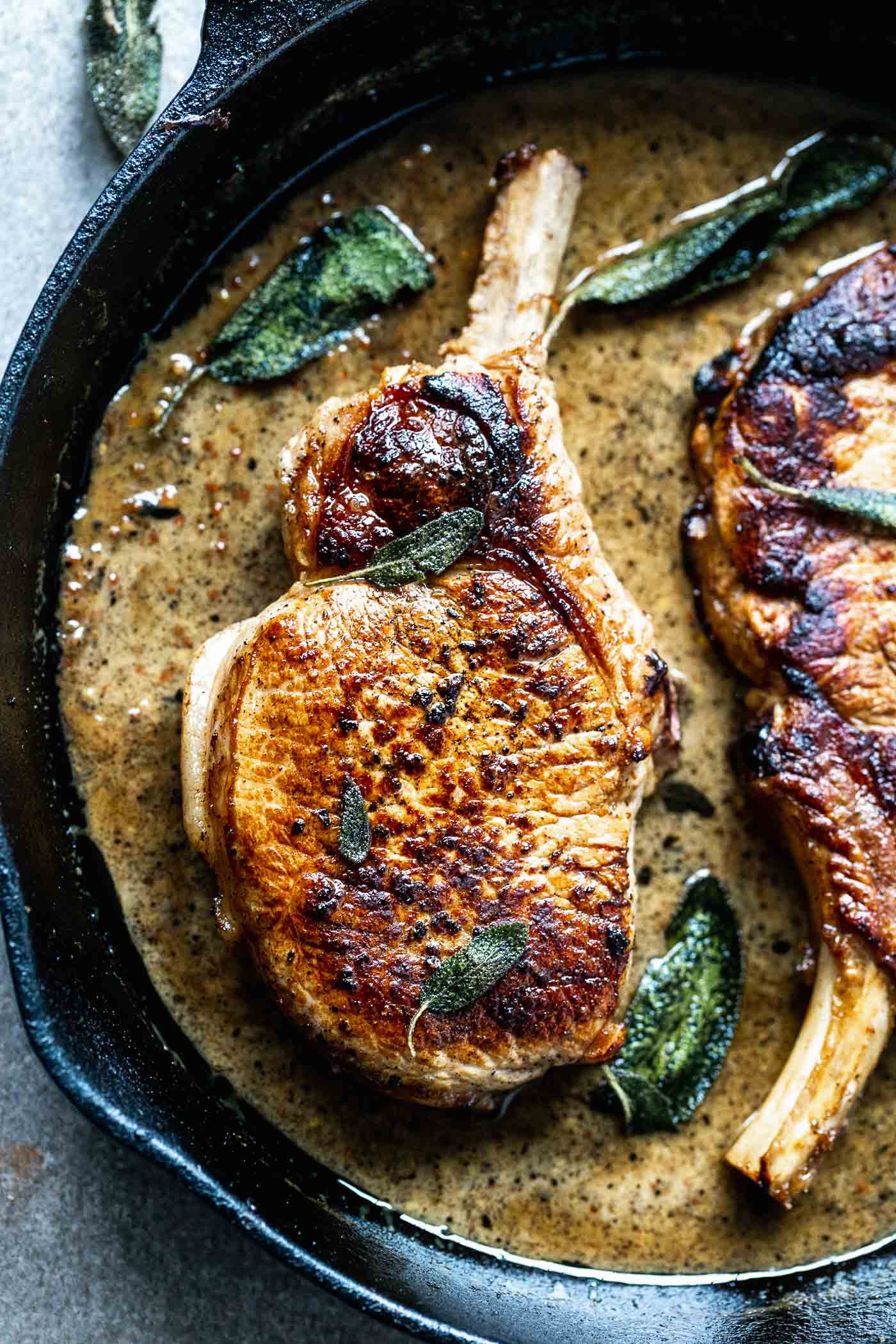 We’ve talked about browning butter a hundred times before here, but if you’re new, you want to start with a super hot pan. Add the butter, then as it melts, swirl the pan. Normally, you’d take it all the way to the browning point, but since the pork chops are being cooked in it, when the butter starts to turn chestnut in color and smell nutty, you immediately put the chops in. Let them sear for a good 2-3 minutes, then flip and sear on the other side for another minute or so.

From there, we pull the chops out for a moment, and throw the sage in to fry. Pull the sage out, put the chops back, pour in a little apple cider and pop them in the oven.

To make sure you cook the pan seared pork chops correctly, use a meat thermometer to check the internal temperature. It should read 145 degrees. It happens fasts, so it will likely only need a few more minutes to cook. If your chops are thin enough, you may not even need the oven at all, just be sure to check! 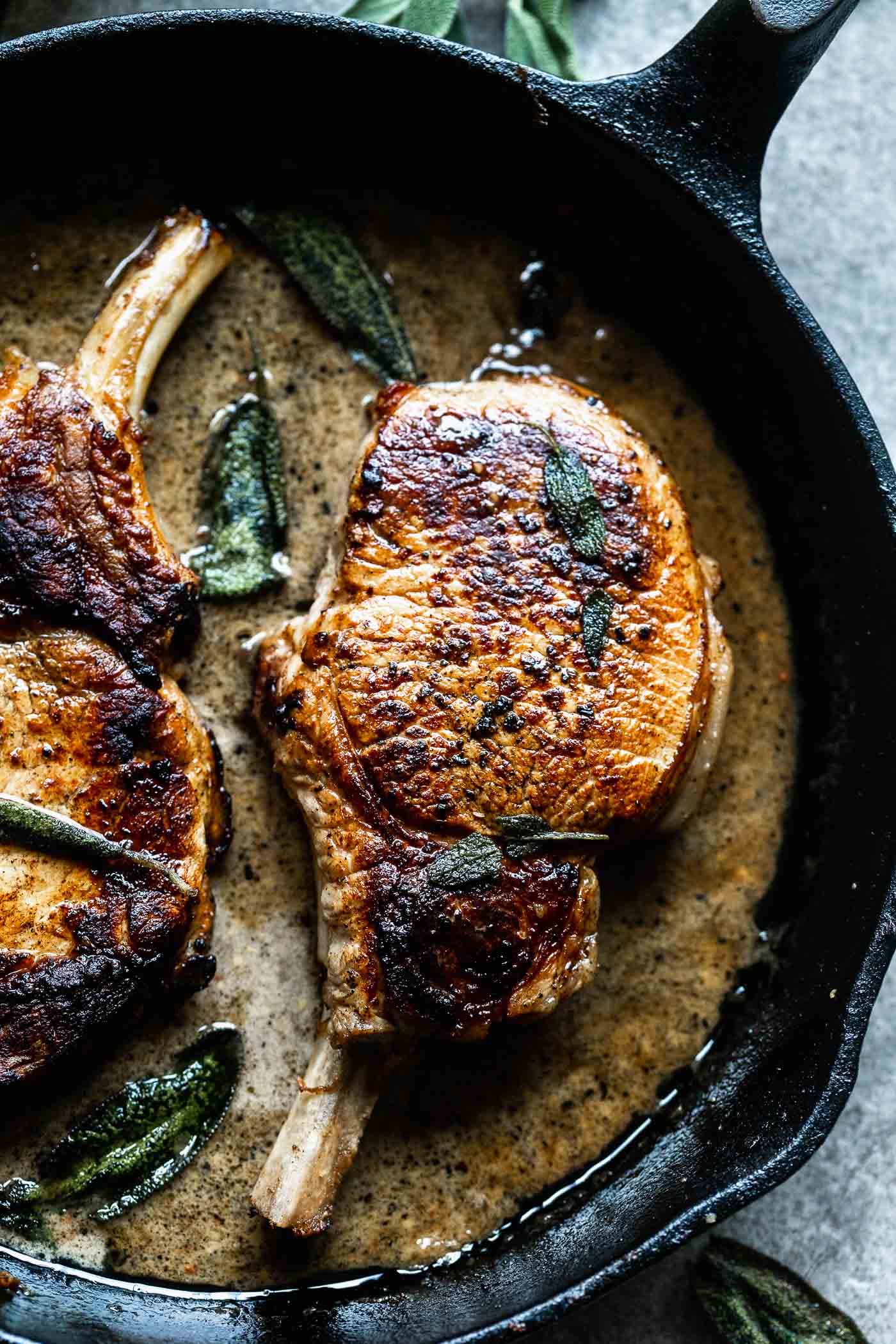 Ok, so the apple cider cream sauce. Oh, the sauce. This stuff is liquid GOLD. So good.

After the pork chops sear and cook in the oven, they, along with the brown butter leave the most delicious bits of flavor in the bottom of the pan. Keep them!

Throw in a little bit of apple cider vinegar and whole-grain mustard into what’s left of the liquid in the pan to deglaze it. We whisk in more apple cider and cream and let it bubble away until thickened.

What to serve with pan-seared pork chops with sage and apple cider cream sauce. 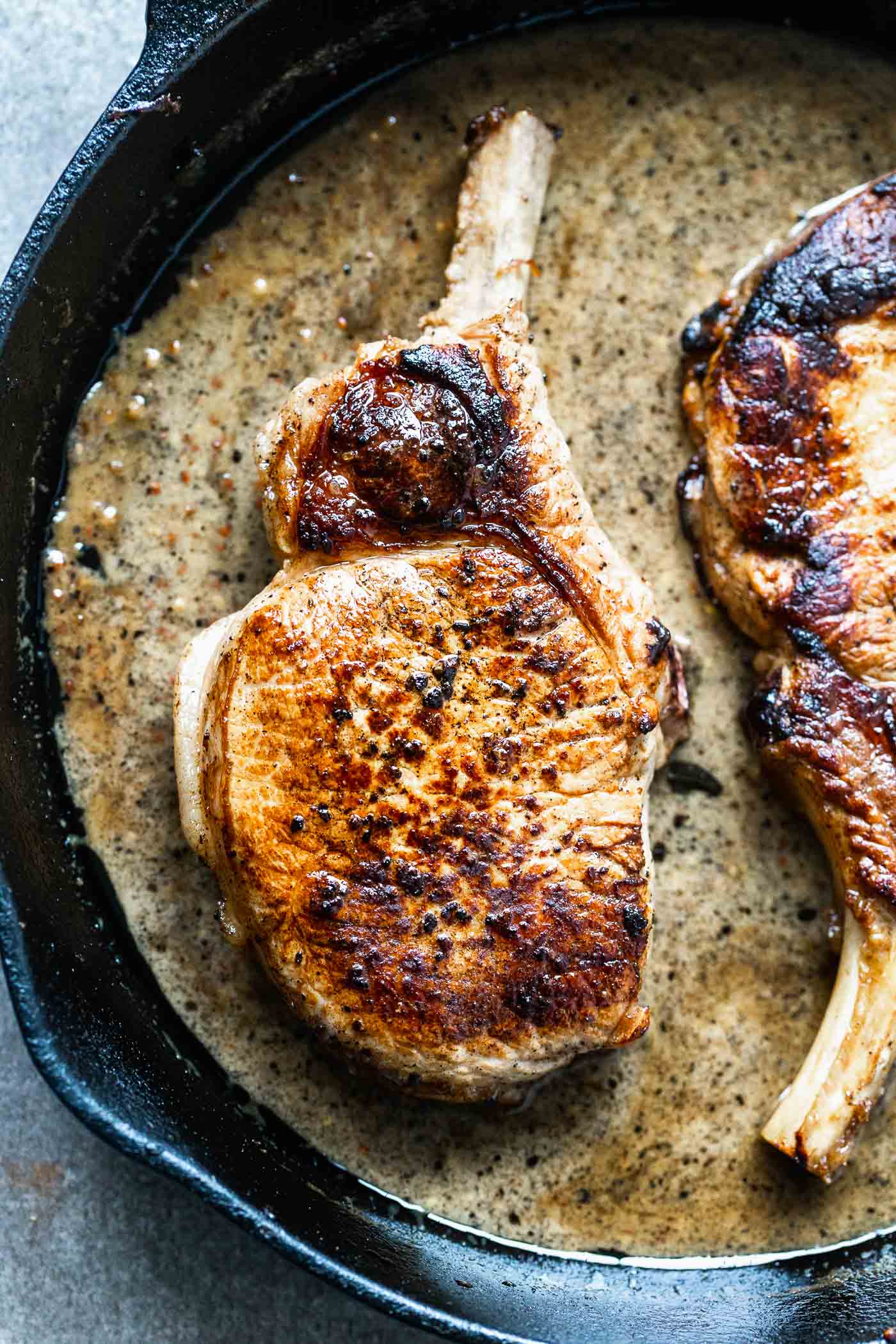 Other awesome AND easy fall/winter recipes: 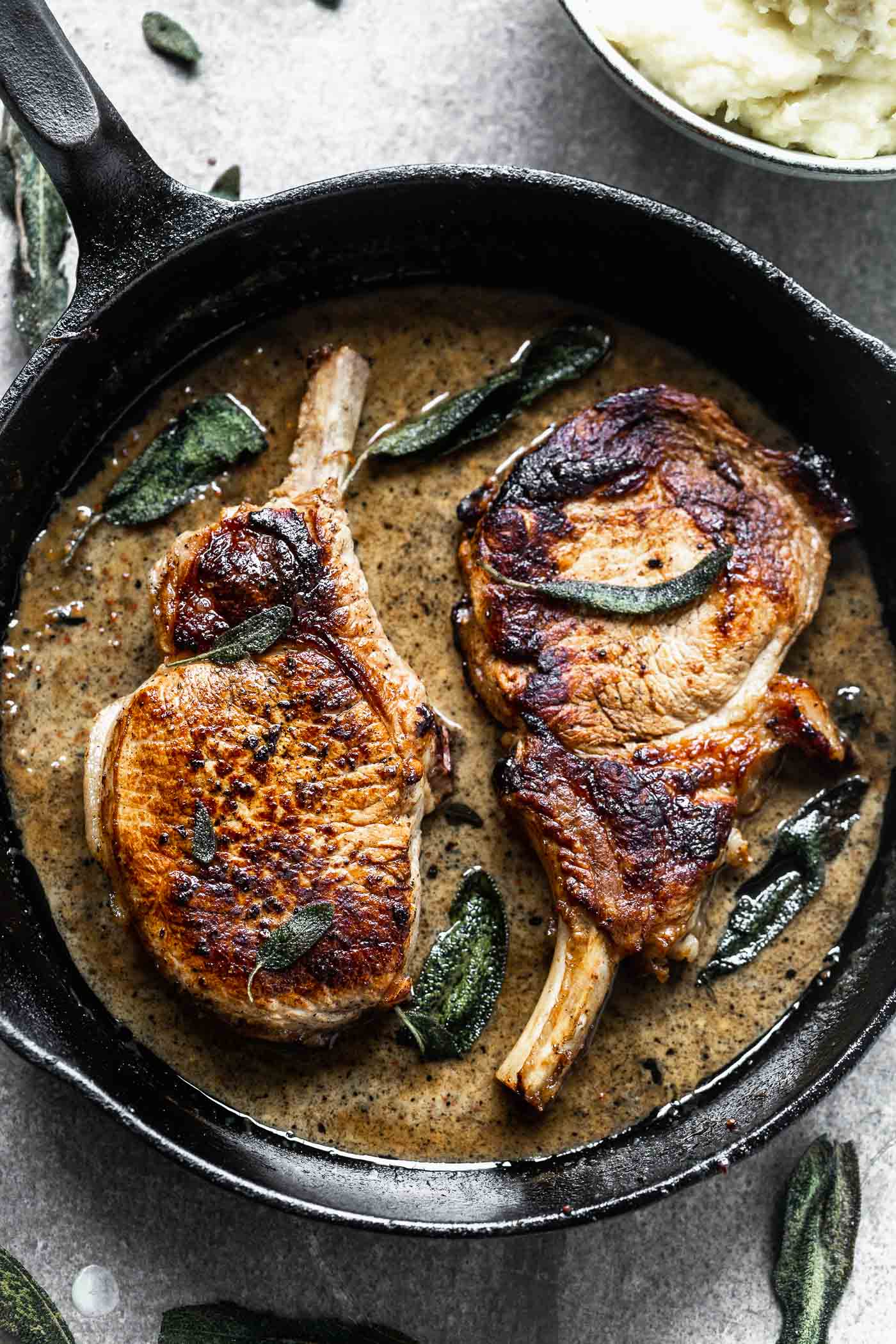 Print Rate Email
Some people believe there's a correlation between beautiful food and difficult food. However, I don't believe the two go hand-in-hand, and today's Pan-Seared Pork Chops with Apple Cider Cream Sauce prove it. We brine and then pan-sear pork chops until golden brown and juicy, then simmer them in a brown butter apple cider cream sauce and fried sage leaves.
Prevent your screen from going dark
2 people

Recipe can easily be double or triples for four or six people! 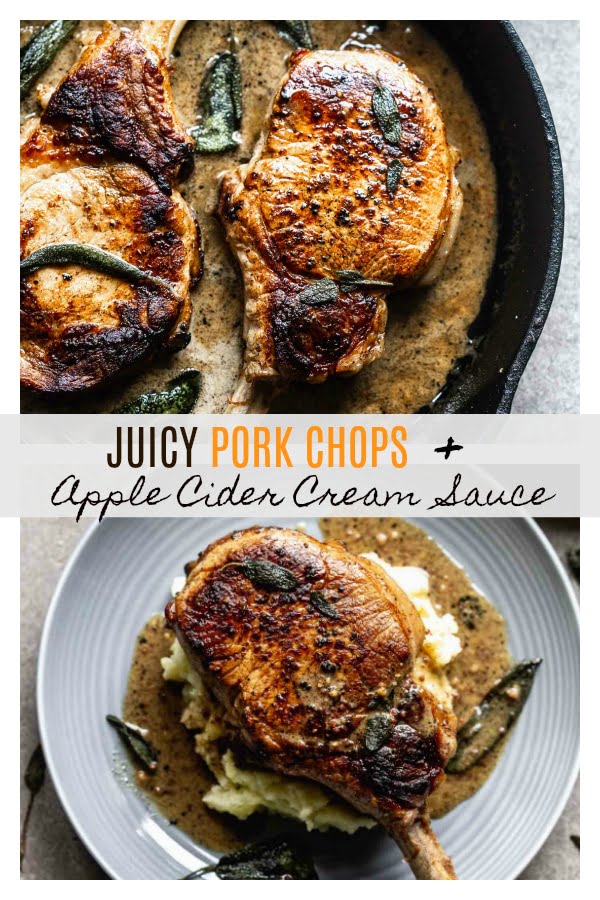