END_OF_DOCUMENT_TOKEN_TO_BE_REPLACED

Creamy Four Ingredient Gorgonzola Pasta: Orecchiette pasta tossed in a creamy gorgonzola sauce, studded with crispy pancetta and seasoned with plenty of black pepper. It’s the ultimate in easy comfort pastas and comes together in less than 30 minutes. 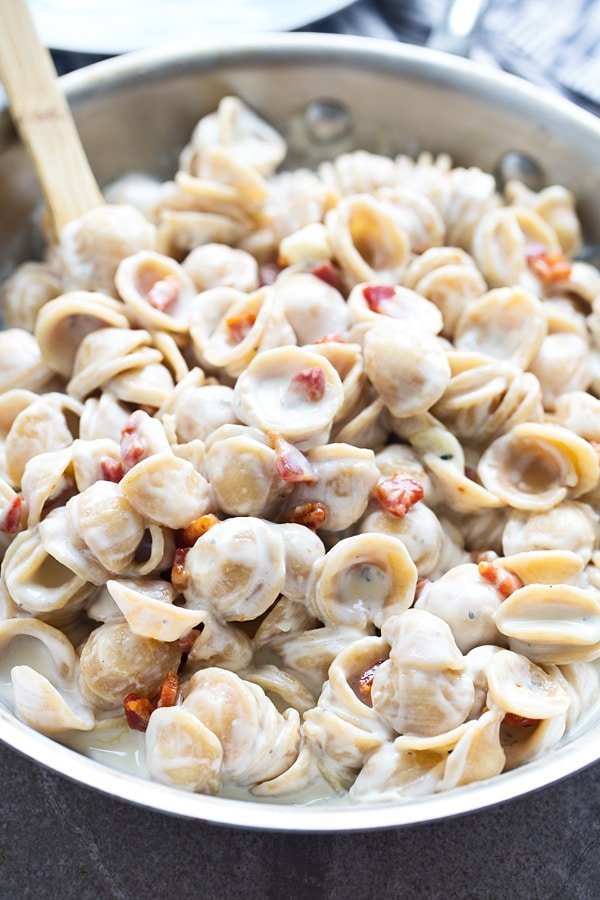 Despite the calendar proof that it’s indeed spring, my brain has yet to accept it, as we’re still being pummeled with frigid temperatures and horrifyingly enough, snow.

It’s the winter that won’t ever end – a disturbing experience for a warm-weather, sun worshipper like myself.

So I’m pushing aside my recipes for spring and summer dishes like this cherry tomato linguine and these spring-inspired crab cakes for good old-fashioned comfort food, which in my world translates to: pasta.

The specific type of pasta?? Creamy Four Ingredient Gorgonzola Pasta. The ultimate of all the comforting pastas, and the only thing I want to eat from now until our next 70-degree day. 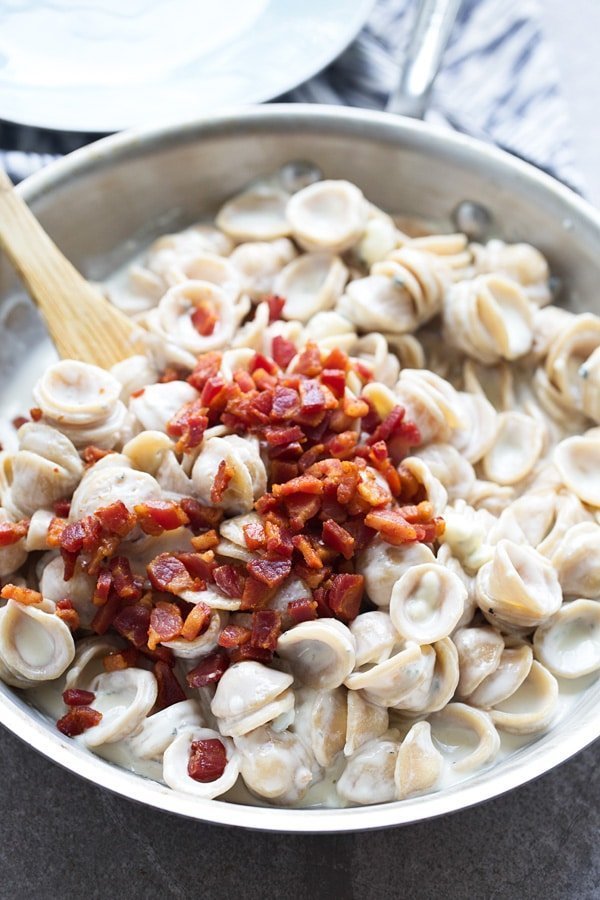 As the name implies, Creamy Gorgonzola Pasta requires only four ingredients – whole-wheat orecchiette pasta, pancetta, gorgonzola and heavy cream – so the recipe is obviously very simple. Because the pancetta and the gorgonzola have such strong flavors, it’s really not necessary to use much else, and as a result, those two flavors really stand out.

Whole-wheat orecchiette pasta. This was just my preferred pasta. I love the way the sauce puddles into the “little ears” of pasta, and because it’s a thicker pasta, it retains a nice texture after it cooks. And even though this is by no means, a super light pasta dish, it makes me feel a little bit better to use whole-wheat pasta.

Pancetta. If you’re not familiar with pancetta, it’s basically the Italian version of bacon. Unlike bacon, it’s only cured, and not smoked, so it has a more mild, salty bite. For this recipe, I like to buy it at the deli counter and has them cut it thicks so I can dice it myself. Trader Joe’s also sells it already chopped if you want to skip the work.

Gorgonzola. This is a form of blue cheese, but I find it to be a little bit creamier and more mild than some other forms of blue cheese. If you can’t find it, any mild soft, blue cheese will work great.

Heavy cream. Gosh, I wish there was a way around using heavy cream, but there just isn’t. Trust me here. 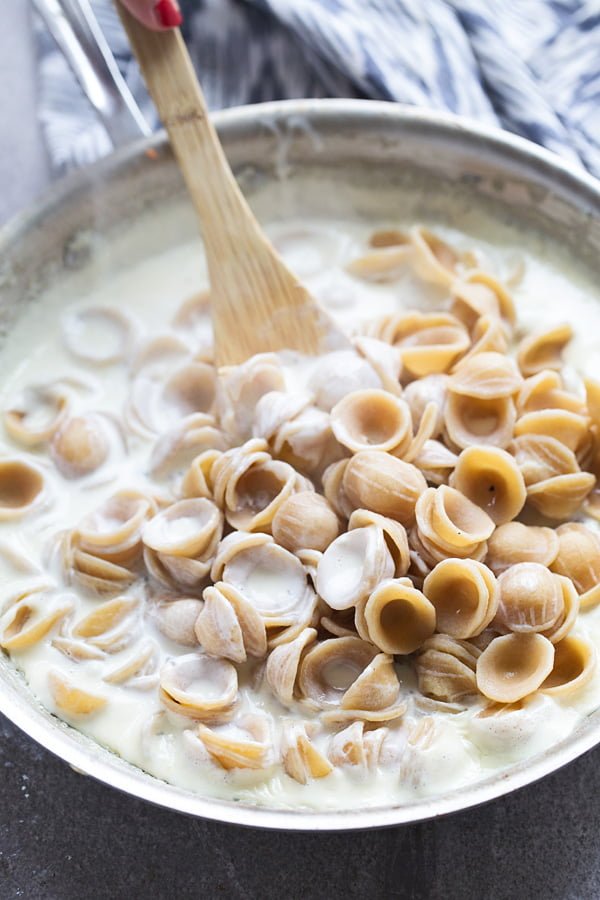 How to make Creamy Gorgonzola Pasta

Here’s what you’re going to do:

First, crisp up your pancetta in a skillet. You can use pancetta that’s either been pre-cubed, or given to you in thick pieces at the deli counter. A lot of grocery stores sell pancetta sliced super thin,in packages, almost like prosciutto, BUT that’s not what you want here. We want tiny dices of pancetta, so if you can find something like this where it’s already cut for you, great, but otherwise, head to your deli counter and ask them to cut you about ½ inch piece so you can cube it yourself.

While the pancetta cooks, dump the whole-wheat (you can also use regular, but I find that this shape tastes almost identical in whole-wheat form) pasta into a vat of boiling, heavily salted water, give it a stir and then let it cook.

While that’s cooking, make the sauce. Remove all of the crispy pancetta bits to a paper towel to drain. Pour the cream over the leftover pancetta fat. Stir and bring the mixture to a simmer for a few minutes until it’s thickened up nicely. Next, whisk in your gorgonzola.

I know for some people, the taste of gorgonzola can be a bit strong, but in this simple sauce, it actually takes on more of a salty bite than anything else. It doesn’t scream BLUE CHEESE, so it’s actually a bit more mild than you’d expect, which I love. Trust me on this one.

Once the cheese has completely melted, season with plenty of black pepper and just a touch, of salt, BUT only if you need it. There’s so much salt in the pancetta and cheese, I didn’t find it necessary to add any more, but everyone’s palate is different, so give it a taste for yourself.

From there, add in the aldente pasta, and stir until the sauce has coated every inch of the pasta. Toss it with the reserved pancetta.

Serve with a big green salad and a glass (or two) of vino, and dinner is complete. 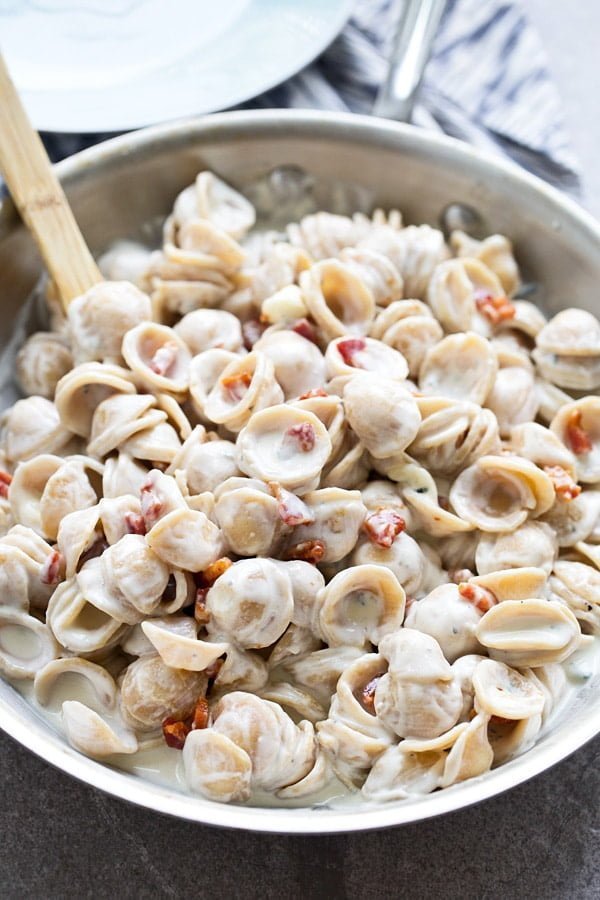 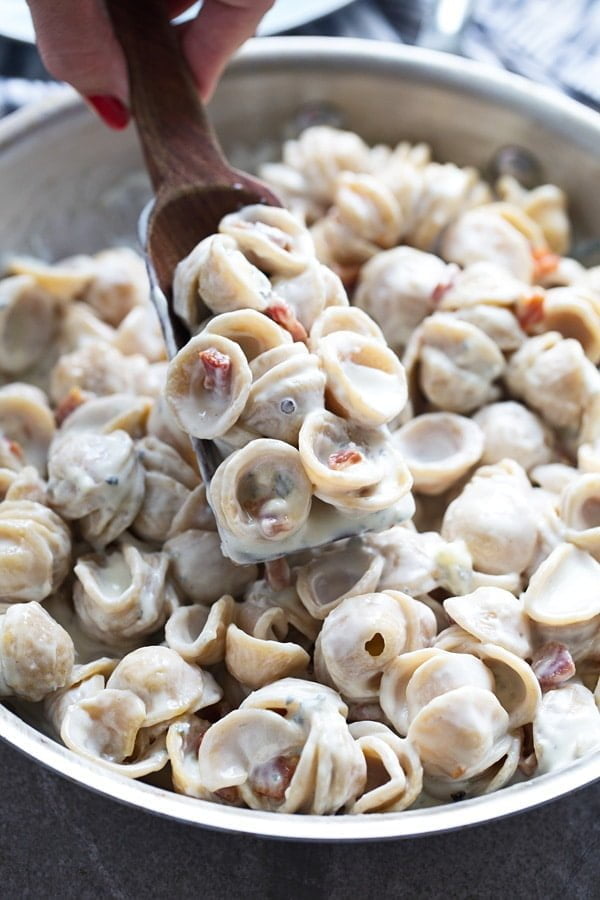 Print Rate Text Email
This Creamy 5-Ingredient Gorgonzola Orecchiette is so simple, but FULL of flavor. Packed with crispy pancetta, and an easy creamy gorgonzola cream sauce, this rich dish comes together in less than 30 minutes.
Prevent your screen from going dark
4 people 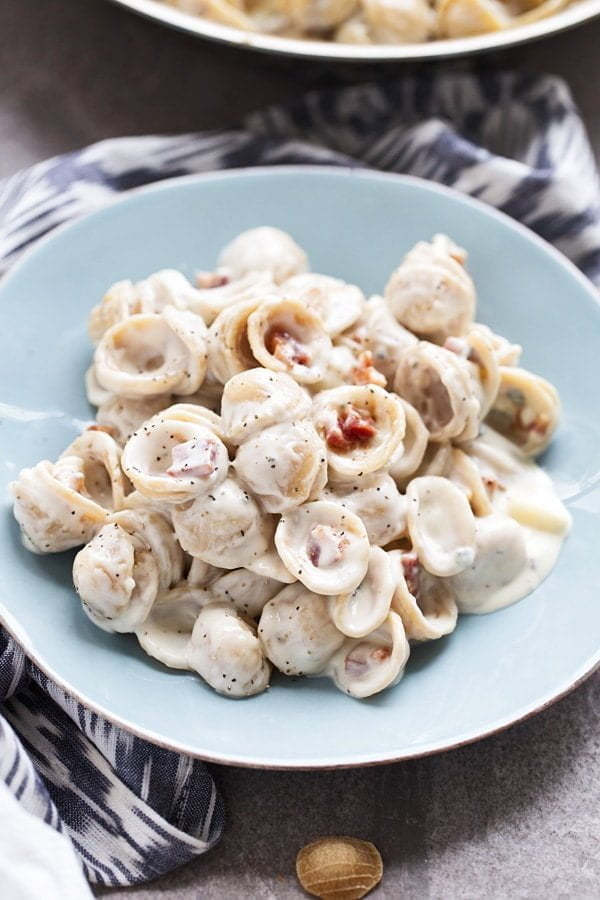