These Peach Brown Butter Sweet Rolls with Cream Cheese Brown Butter Glaze are a sweet taste of summer. They’re a labor of love, but worth the effort! 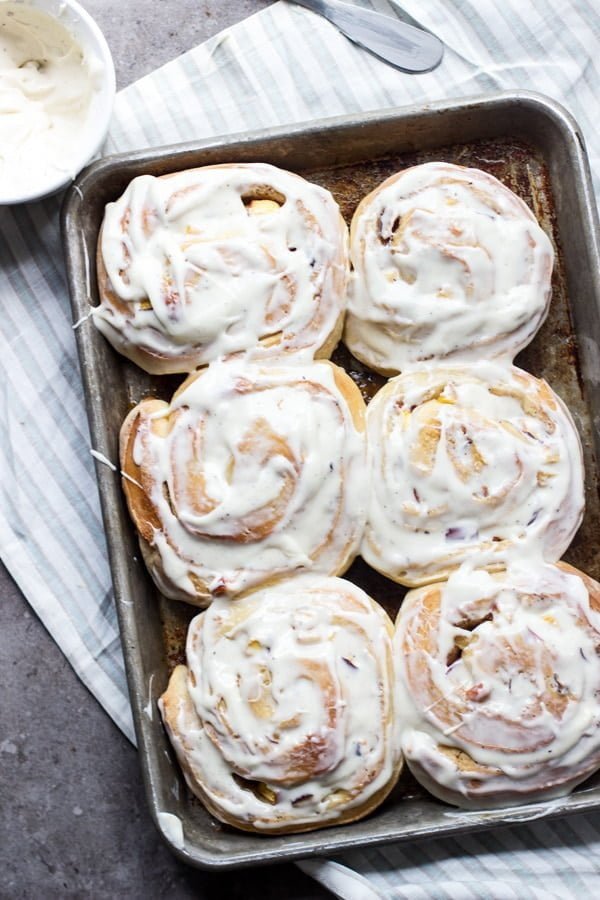 My husband is a simple guy and one of the most laid back people I know. He loves watching sports, monitoring the progress of our yard, drinking cold Miller Lights, eating Chipotle and playing with our kiddos. 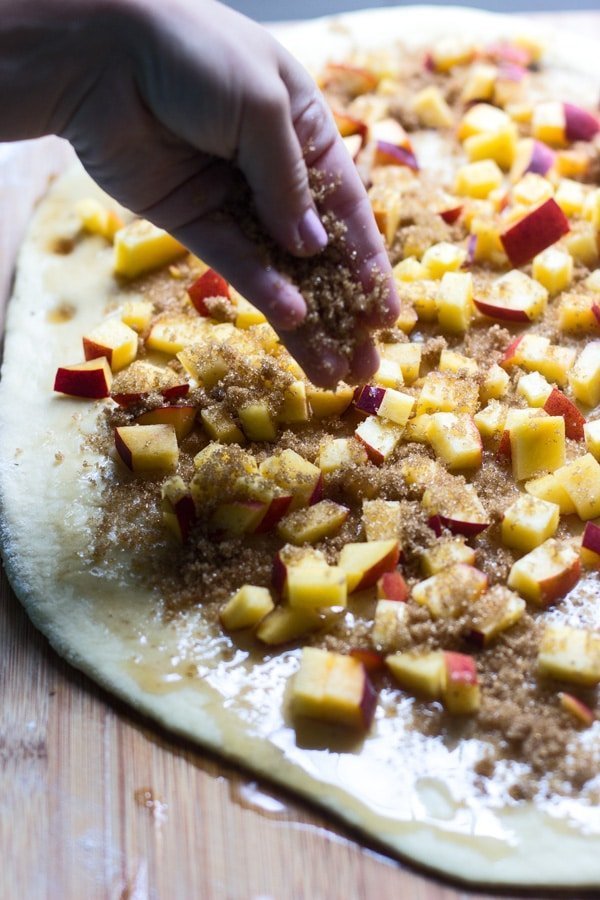 In general, he doesn’t ask for much from me, contrary to how much I ask out of him (fix this, hang that, paint this ENTIRE house). When it comes to food though, that’s a different story. While he willingly tries every single crazy concoction that comes out of our kitchen without complaint, I know he’d be perfectly content with steak and potatoes, burgers or frozen pizza every night of the week. He rarely requests anything for me to make, simply because he knows my mind is always going a million miles a minute with new recipe ideas, but every once in a while, he demands one of three things: stir-fry, plain buttermilk pancakes or sticky buns.

Most times I’m extremely willing to comply, especially when it comes to stir-fry or pancakes since they are quick-cooking and easy to throw together, but these last couple months have been extraordinarily busy, which will happen when you add another bambino to the mix. SO the thought of spending three hours cranking out homemade sticky buns hasn’t exactly been at the forefront of my mind. 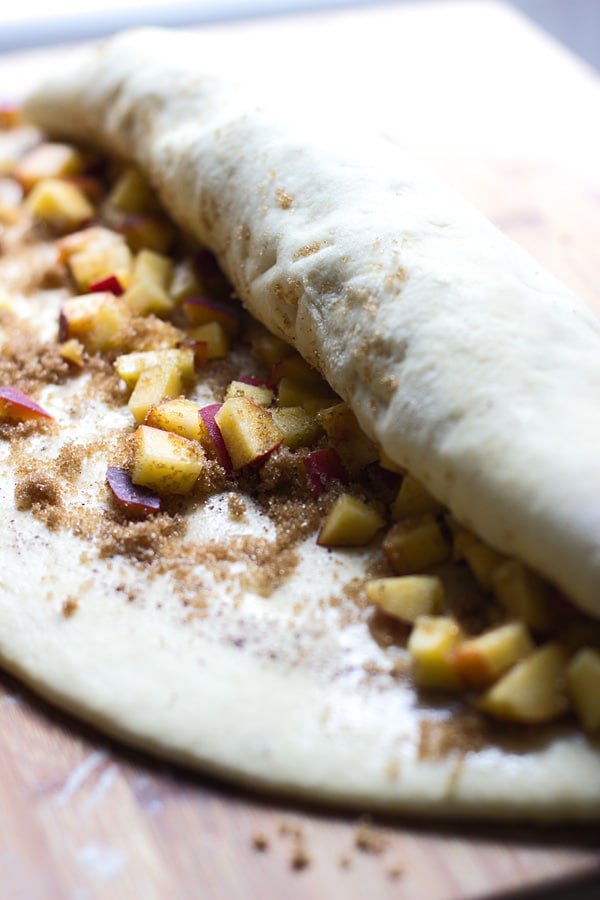 I’ve had the idea for this recipe since last summer, except instead of peaches I wanted to try an upside-down pineapple variation, but just never got around to it. Last week, when Kevin practically begged for his beloved sticky buns, I knew I needed to grant him his wish. Plus I’d been stocking up on peaches for the past few grocery tricks and thought that they would make the perfect seasonal substitute for the pineapple version I’d been dreaming up in my head. 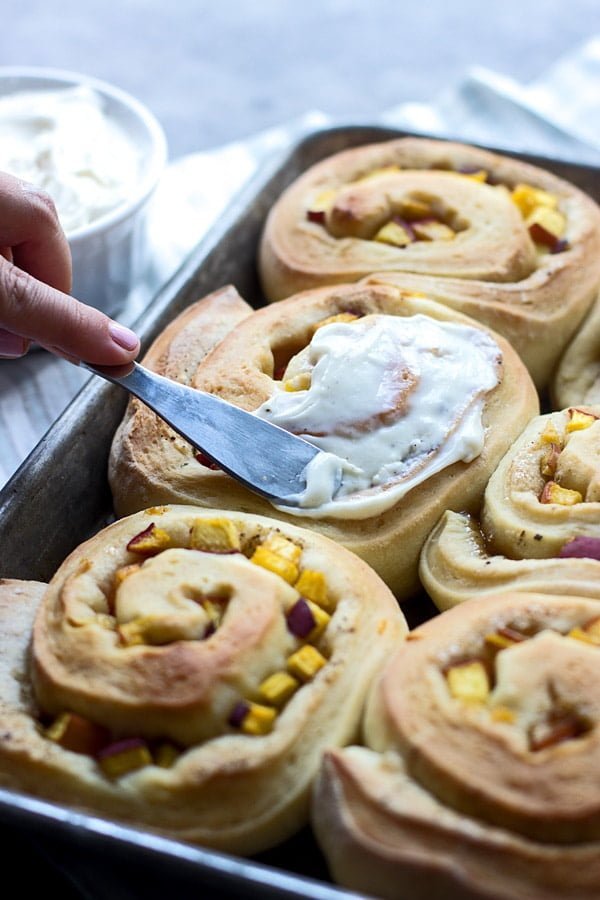 This sweet bun recipe is something I use over and over again and is somewhat adapted from this Cooking Light version, it’s super easy to throw together, and requires very little hands on time, which I love.

Instead of sprinkling the surface with the typical butter, cinnamon and sugar, I browned a few tablespoons of butter until it was nutty and chestnut-hued, then sprinkled the surface with dark brown sugar (you can use light if that’s what you have on hand) and then covered the whole thing liberally in diced peaches.

The dough gets rolled up jelly roll style, cut into 1-inch pieces, nestled into a greased baking dish and then they’re left to rise one last time before they’re get popped into the oven to bake. 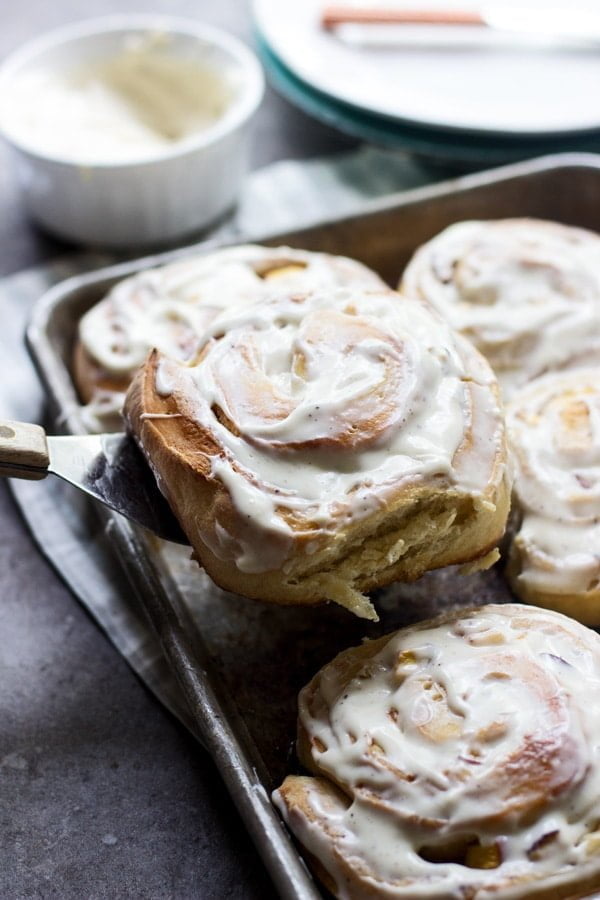 While the rolls are baking, I whipped up a super quick cream cheese glaze with a twist. Instead of using plain softened butter, I again, browned it, then transferred it to a small dish, threw it in the freezer until it solidified again, and then whipped it up with the softened cream cheese. After a touch of vanilla is added in, powdered sugar follows suit and everything is gently mixed together until its smooth. An optional, but recommended touch? Sprinkle in a little bit of flaked sea salt at the end. 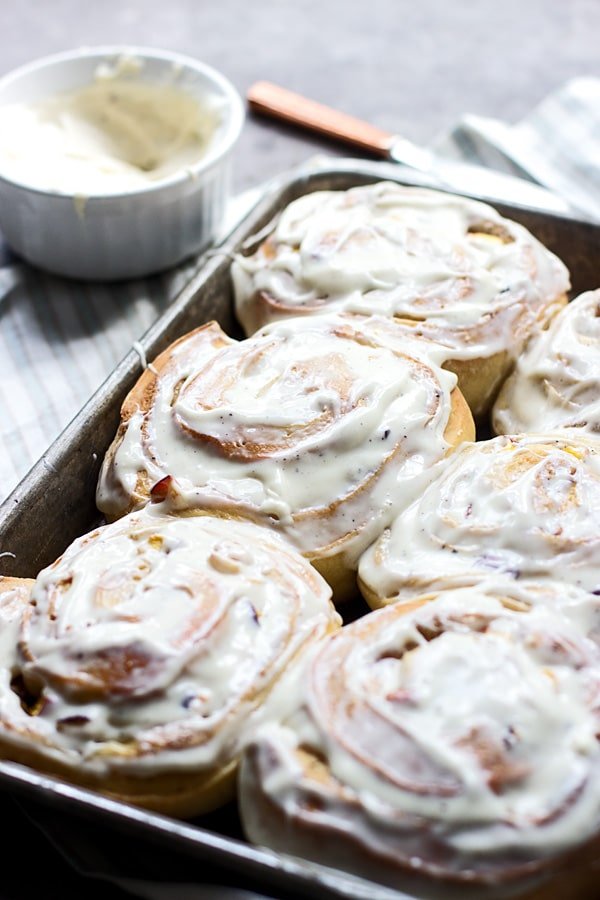 Once the rolls come out of the oven, they’re smothered with the brown butter glaze while they’re still hot and then they’re ready to be inhaled. 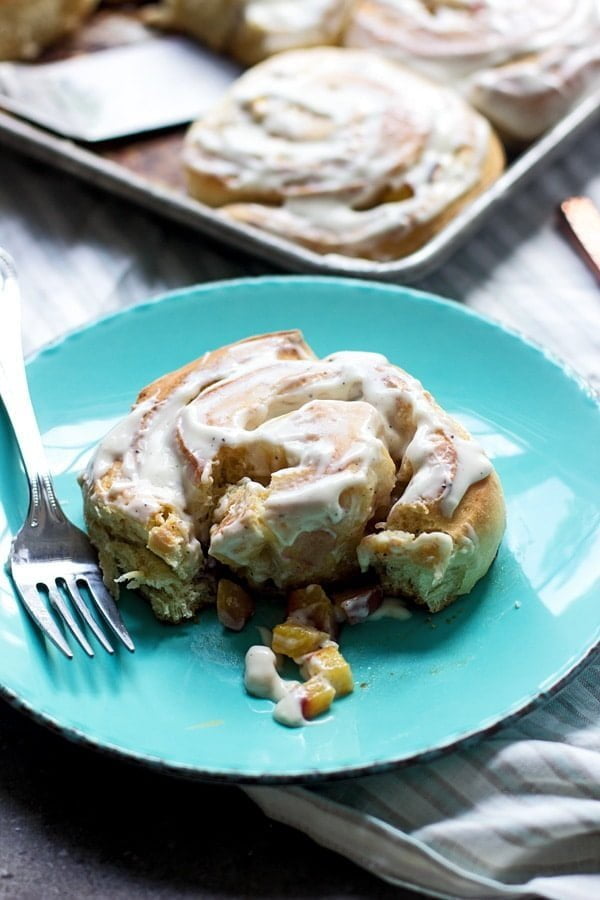 Print Rate Email
These Peach Brown Butter Sweet Rolls with Cream Cheese Brown Butter Glaze are a sweet taste of summer. They’re a labor of love, but worth the effort!
Prevent your screen from going dark
8 rolls