Chewy soft pretzel meets sweet cinnamon roll in these Pretzel Cinnamon Rolls with Cream Cheese Glaze. They’re a labor of love, but trust me, you won’t regret the labor. 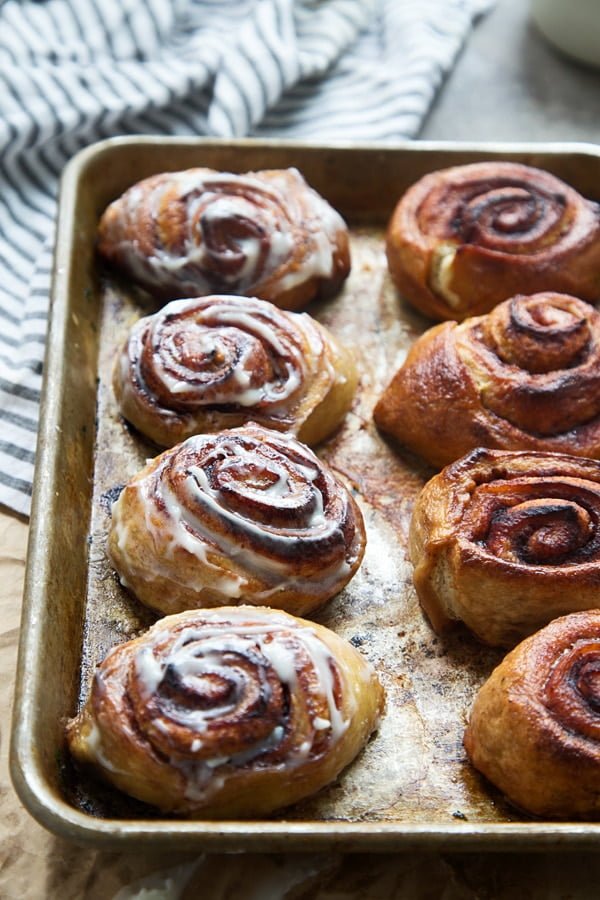 Kevin would claim he loves everything I make, but I know by the way he picks at anything with quinoa or Brussels sprouts in it, that’s far from the truth. It’s sweet that he tries to pretend, but I’m on to him. When others question him on what his favorite items I make are, his answer usually alternates between any of my homemade pastas, enchiladas or sticky buns. Admittedly, there has been quite the drought in sticky bun preparation as of late, you know since I had a child and all that, so I’m willing to bet that’s what his answer would be today.

Despite the absence of sticky buns, lately I’ve been baking up a storm, at least compared to what I was in Teddy’s first year of life. My traditional sticky buns are on the list to make in the next couple weeks, but for now, today’s Pretzel Cinnamon Rolls will have to suffice. 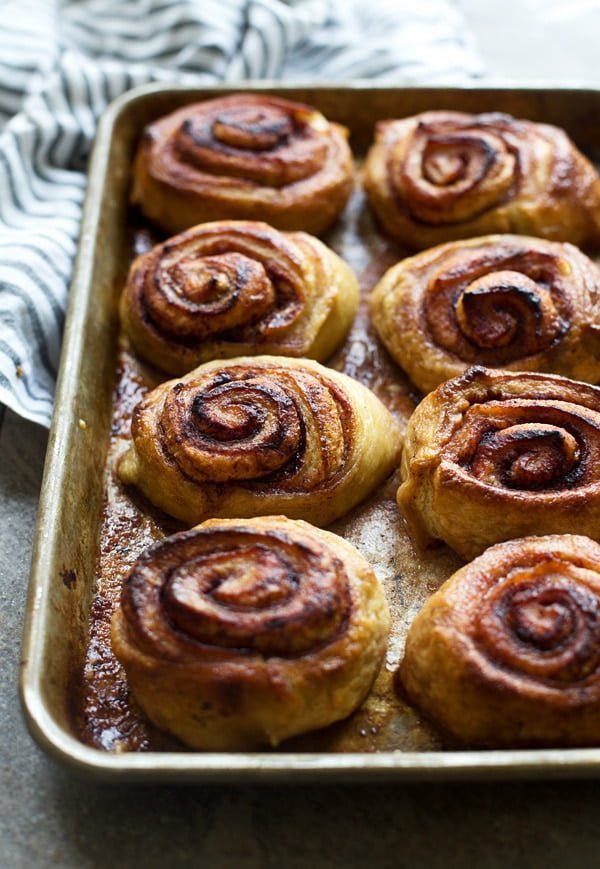 The idea for these a few months back when my girlfriend Meghan told me she somehow butchered a batch of homemade soft pretzels, but instead of throwing the dough away, she just used it to bake a batch of cinnamon rolls. I thought the idea was pretty genius, so I took it a step further and wondered if I could continue the process for making pretzels even after the raw cinnamon rolls were formed. I had no idea how it was going to be done, but figured I might as well give it a shot, because it’s not something I’ve ever seen before, and if I’m being perfectly honest, I secretly relish being the first to try something out.

To say I lacked confidence the first batch would turn out is a severe understatement, I was CERTAIN it would take me at least three or four tries. I had so many questions to start with. Would a formed cinnamon roll hold its shape in the baking soda bath? Would the entire filling come out? Could the cinnamon and sugar taint the pretzel dough and prevent it from having that beautiful golden sheen after baking? 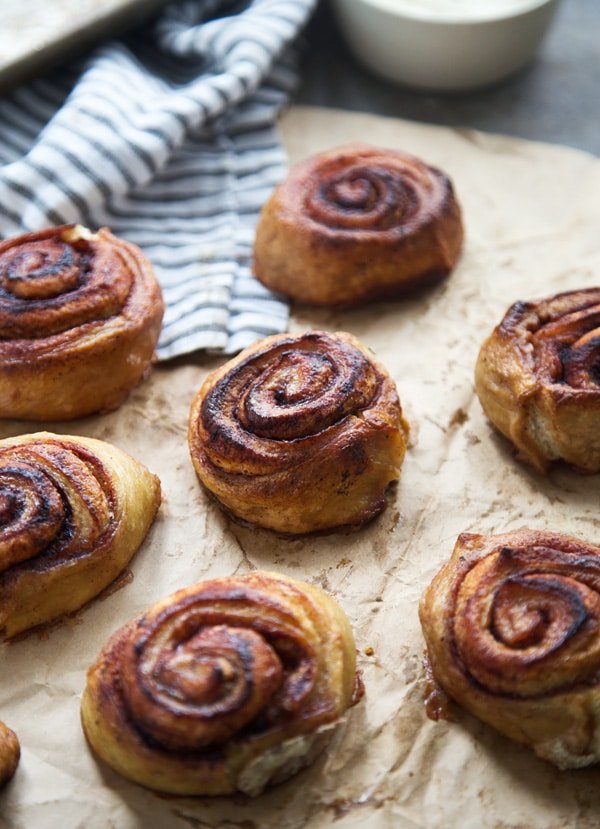 I carefully thought about the process beforehand so I could minimize any unnecessary fourth or fifth attempts, and much to my surprise, batch number one came out impeccably.

Here’s how I did it: Once the pretzel dough rises, it’s made the exact same way as a traditional cinnamon roll. The dough is rolled out, it’s brushed with plenty of melted butter and then generously sprinkled with a cinnamon and sugar mixture. The dough is rolled up, jelly roll-style and then cut into 1 ½ inch rolls. Because I was worried the filling would seep out during the boiling process, I closed the bottom of each roll by pinch the dough together so that only one cinnamon sugar-laced end was exposed to the baking soda and water mixture. 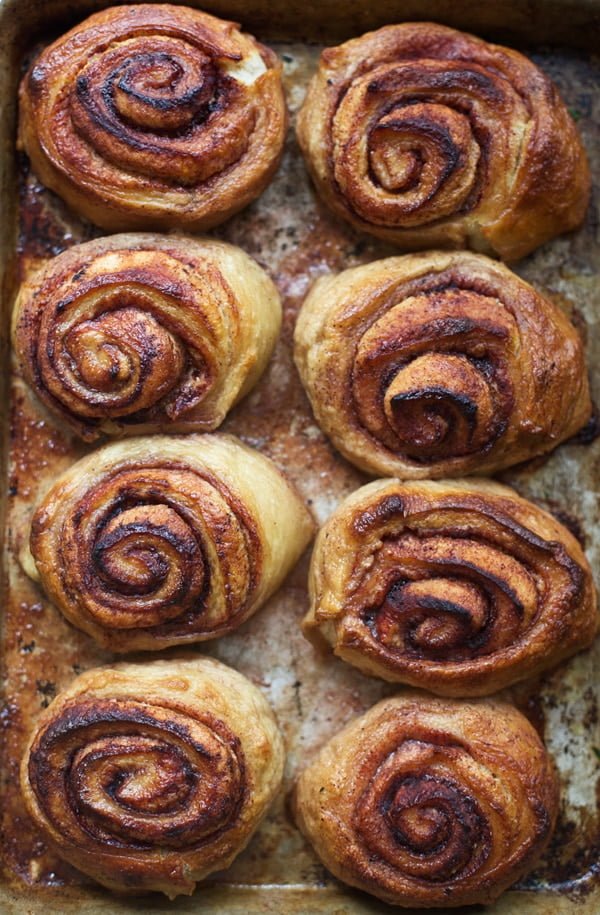 After each roll was boiled for one minute (30 seconds on each side), they were lined up in a rimmed baking sheet, brushed with egg wash and baked until golden brown. Because sugar has a tendency to burn, I baked them in the bottom rack of the oven for about 10 minutes, and then finished them off on the middle rack for another 5-10 minutes.

After they cool off for a quick minute, they’re conservatively spread with cream cheese glaze and ready for eating.

I do suggest serving these the same day, and preferably straight out of the oven since pretzels are a bit denser, they’re really not as good the next day. And I want to reiterate the AS in not as good, because they are still delicious the second day, they just don’t taste the exact same as they do immediately upon leaving the oven. 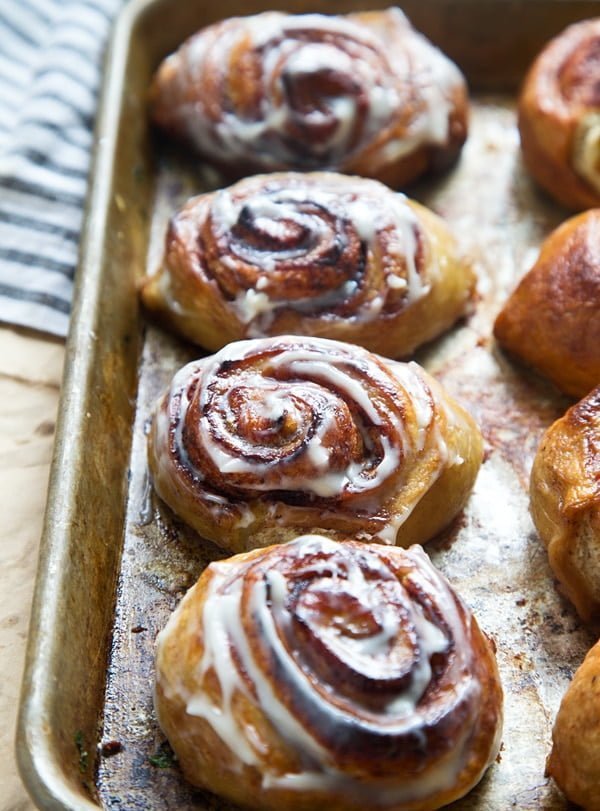 For more soft pretzel or cinnamon roll recipe, check out these posts: